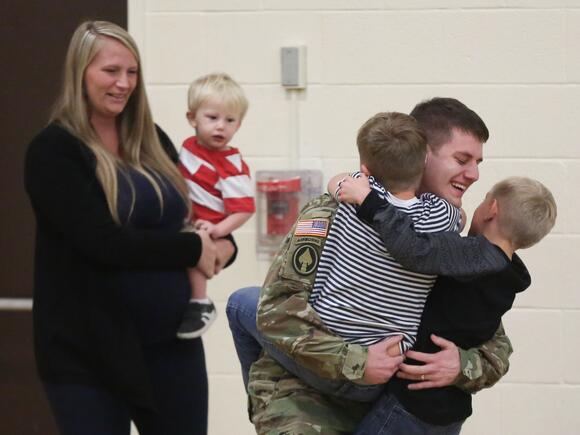 COLUMBUS — The end of the United States' longest war in Afghanistan is about to trigger the start of a three-year clock for its veterans to apply for cash bonuses approved by Ohio voters a dozen years ago at a time when the nation was embroiled in two post-9/11 hot spots.

“The money for combat bonuses has always been intended to be a material and sincere thank-you from the people of Ohio to fellow citizens who have served in active status during the war,” said Sean McCarthy, assistant director of the Ohio Department of Veterans’ Services, or DVS, and a veteran of the Afghanistan War.

“The amount of money may not seem like any kind of fair compensation for what the people who have served and seen combat have suffered,” he said. “I do not believe that it is compensation but is intended to be a manifestation of gratitude from their neighbors and fellow Ohioans.”

The three-year clock is expected to start around Thursday, but the Sept. 30 date has not yet been officially set.

Thursday marks one month after the final U.S. troops were flown out of the airport at Kabul, beating President Biden's deadline for ending the war by one day. The pullout occurred less than two weeks before the 20th anniversary of the 9/11 terrorist attacks on U.S. soil.

A firestorm of criticism erupted over how the withdrawal was conducted. Even as the United States evacuated troops and certain Afghan citizens, the U.S.-backed Afghan government and military collapsed as a resurgent Taliban swiftly retook the country.

Ohio voters in 2009 overwhelmingly approved a constitutional amendment authorizing the borrowing of up to $200 million to compensate veterans of the then-ongoing wars in Afghanistan and Iraq as well as the 1991 Persian Gulf War.

Ohio's tradition of providing veteran bonuses dates back to the Civil War, but the windows for seeking bonuses for prior wars, including Iraq and the Persian Gulf, have closed.

Survivors of those killed in the line of duty or declared missing in action or a prisoner of war may apply for benefits of $5,000.

According to Veterans’ Services, Ohio has paid $23.4 million in bonuses to date to Afghanistan war-zone veterans. That compares to the total of $31.3 million paid out for the Iraq war zone and $6.2 million for the Persian Gulf.

Another $10.8 million has been paid in connection with service outside Afghanistan and Iraq and $5.6 million outside the Persian Gulf.

So far, the state has borrowed about $84 million out of the total $200 million authorized under the constitutional amendment. Mr. McCarthy said past bonuses have never maxed out the total authorization.

A U.S.-led coalition of forces invaded Afghanistan weeks after the terrorist attacks on Sept. 11, 2001. Mr. McCarthy, a former Franklin County assistant prosecutor, volunteered for duty with the Army and was sent to Afghanistan.

Before joining DVS, the veteran applied for and received a bonus of roughly $1,000, saying he found the process to be easy and quick.

“I hope the men and women who served in Afghanistan continue to feel pride in their service,” he said. “I had the privilege of serving alongside people of extraordinary commitment who answered the nation's calls. The value of service does not depend on the outcome of political decision-making.

“I'm not trying to say anything about the American or Afghanistan governments, but at the end of the day leaders make decisions about war and service members execute those decisions,” he said.

Ohio will pay $5.8 million in bonuses to state employees who got COVID-19 vaccine

Ohio is trying to get its 50,000 state employees vaccinated. In July the state offered $100 checks to any state employee who reported getting their first of a COVID-19 vaccine. Then, in September they upped the ante. State agencies where 65% or more employees reported being vaccinated by Oct. 15...
OHIO STATE・7 DAYS AGO
WTRF- 7News

BRIDGEPORT, Ohio (WTRF) – He’s an Army veteran, owns multiple businesses in Bridgeport and now John J. Callarik is one of the newest members of the Ohio Veterans Hall of Fame.  The 95-year-old is one of 20 veterans who were invited to attend a special induction ceremony in Columbus last week to recognize their accomplishments […]
OHIO STATE・1 DAY AGO
spectrumnews1.com

OHIO — A group of veterans and patriots from northeast Ohio are serving their country again. This time, they are helping restaurants battle the pandemic. Each week, Mike Bokulich and others gather to honor their country and give a restaurant a helping hand. "We do this because we like to...
OHIO STATE・3 DAYS AGO
wosu.org

Ohio returned $1.5 billion in federal COVID relief money to repay what it borrowed to keep paying unemployment benefits during the pandemic. But there’s still no solution to shoring up the state’s unemployment compensation fund, which has gone broke twice since 2009. The head of the group representing many of Ohio’s businesses said he has a plan to change the way unemployment benefits are paid.
OHIO STATE・5 DAYS AGO

DeSantis To Hire, Offer $5K Bonus To Officers Fired In Other States Over Vaccine Mandates

Gov. Ron DeSantis, R-Fla., has said he is considering legislation that will provide a $5,000 bonus for police officers to relocate to Florida so they won’t have to deal with vaccine mandates in their states. Speaking with Maria Bartiromo on Fox News’s “Sunday Morning Futures,” DeSantis said that Florida is...
POLITICS・3 DAYS AGO
SCDNReports

DeSantis says plan to offer $5,000 bonuses to out-of-state police relocating to Florida is not related to vaccine mandates

(CNN) Florida Gov. Ron DeSantis said Monday his plan to offer $5,000 bonuses to law enforcement officers who relocate to Florida for jobs has nothing to do with Covid-19 vaccine mandates roiling big-city police departments. "It will be available to anyone who comes. If people are saying it's a vaccine...
FLORIDA STATE・3 DAYS AGO
Cleveland.com

More than 11,000 State of Ohio workers to get $300 bonuses for meeting coronavirus vaccine challenge

COLUMBUS, Ohio — More than 11,000 State of Ohio employees -- 22% of the state’s workforce -- will be paid $300 bonuses because at least 65% of their co-workers attested to getting coronavirus vaccinations, according to data released Wednesday. Under an incentive program set up by Gov. Mike DeWine’s office,...
OHIO STATE・7 DAYS AGO

US troops secretly tipped off about Iran-backed attack, bomb fragments found where they sleep, says report

After receiving a tip about an imminent Iranian-backed drone and rocket attack on a base in Syria last week, U.S. forces housed there quietly evacuated the base, unnamed military officials told Fox News on Monday. Upon returning to the base, U.S. troops reportedly found fragments from exploded munitions in places where they slept and stood guard.
MILITARY・2 DAYS AGO
Insider

State school board associations are angry that the national organization asked Biden last month for federal assistance to quell heated board meetings.
BREVARD COUNTY, FL・2 DAYS AGO
The Blade

COLUMBUS — For the first time in state history, Ohio recorded more deaths than births last year, a development experts say was expedited by coronavirus. The Columbus Dispatch reported Monday that roughly 143,661 Ohioans died last year while 129,313 were born, according to data from the Ohio Department of Health. So far in 2021, Ohio has logged 107,462 deaths and 100,781 births.
OHIO STATE・2 DAYS AGO
The Blade

What will it take to raise NW Ohio vaccine rate? Survey provides hints

When it comes to sources of information about the coronavirus vaccine, northwest Ohio residents don't put much trust in religious leaders, news reporters, even the U.S. Surgeon General or county health departments.
OHIO STATE・1 DAY AGO
Daily Mail

Texas braces for the 'mother of all caravans': 1,000 state troopers and Texas Rangers deploy to the border as 3,000 migrants prepare to arrive in days

A unit of 1,000 state police officers and Texas Rangers assigned to monitor areas along the Lone Star State's 1,241 miles of border with Mexico is readying to guard against the next surge of migrants looking to defy President Joe Biden's administration. A month has passed since Texas state law...
IMMIGRATION・2 DAYS AGO
Newsweek

Republicans have accused Garland of comparing angry parents to domestic terrorists, but Garland has never made such a comparison.
CONGRESS & COURTS・18 HOURS AGO
Daily Mail

Parents sell Afghan baby girl for $500 to feed the rest of her starving siblings: Daughter was given to a stranger 'who wants her to marry his son' - as country faces total collapse

Starving Afghan families are selling their children in a desperate bid for money after the Taliban takeover put an end to the foreign funds that propped up the fragile economy, leaving it on the brink of collapse. BBC reporter Yogita Limaye travelled to a village outside of Herat, in the...
FOOD & DRINKS・2 DAYS AGO
Turnto10.com

Migrant caravan has 'no regard for the rule of law,' says ex-border official

WASHINGTON (SBG) - Thousands of migrants organized by QR code have reportedly forced their way through the Mexican National Guard on their way to the U.S. border. "The United States border control is overwhelmed, that's why we have large areas of the border wide open," said former acting commissioner of Customs and Border Protection Mark Morgan to The National Desk’s Jan Jeffcoat.
IMMIGRATION・2 DAYS AGO
Business Insider

Russia and China's deepening ties have worried US officials, but some say Moscow should be worried about its increasingly powerful partner.
POLITICS・2 DAYS AGO
Newsweek

Russia's national coronavirus task force reported 1,106 COVID-19-related deaths on Tuesday, the most since the start of the pandemic.
PUBLIC HEALTH・2 DAYS AGO