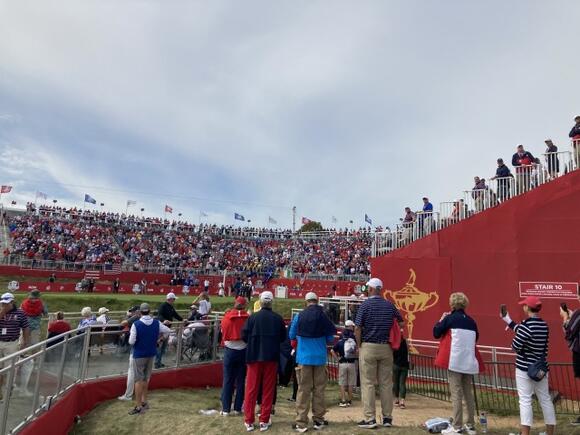 Wisconsin golf fans waited a long time for this event, and it did not disappoint.

The roars at Whistling Straits echoed throughout the grounds Sunday as Team USA won the Ryder Cup. To say this moment will be one to remember is an understatement as Sunday's atmosphere has been unreal.

"It's no surprise America won,” said Bruce Neese, a fan from St. Louis. “We've got the greatest players in the world. We respect the Europeans, we respect the game, but we won because we've got to the best ball strikers, and the best putters and the best chippers. U-S-A, we got the cup!"

"We've got a lot of superstars that will be for years to come. Europe has definitely kicked our butt in the last couple of Ryder Cups, but it's been a long time coming,” said Ben Goodpaster, a fan from Fayetteville, Arkansas.

"A good Michelob Ultra or two with a little bit of Scotch will do. But we won seven out of the last nine, so it was the USA's turn in that respect,” said England fan Max Kernick.

"It's very, very difficult and we wish we were in a better position but look the U.S. has a much stronger team in fairness on paper. Unfortunately, we haven't played above ourselves than we needed to,” said Zeno Kelly, a fan from Dublin, Ireland.

That strong American team delivered on the greens. Fans credit the win to all the putts made throughout the event.

"We want to set the record for the largest margin of victory,” said one fan from New York.

"Absolutely we're happy with the results,” said Neese. “We respect the game, but we want the cup on our own soil because this is our house!”

It's no secret that Team USA fans have won their right to party. Many fans NBC 26 spoke with say they'll be celebrating today's victory the Wisconsin way: with some good 'ol beer and of course watching the Packers game.

Golf without Tiger Woods and Jordan Spieth is a dull, dull place. Which is why it's great to see Spieth return to some form over the past year and now he's back to his dazzling best. Great at the Ryder Cup, back in the winners' circle on the PGA Tour...
GOLF・7 DAYS AGO
Golf Channel

Justin Thomas has already earned more than $44 million in prize money over the course of his seven-year PGA Tour career, so it’s safe to say that his closet at home in South Florida is pretty sizable. It just doesn’t have room for any more Team USA gear. Thomas, who...
GOLF・9 DAYS AGO
Essence

'At the end of the day I'm both. Nobody can take that away from me.'. When Olympic hurdler Jasmine Camacho-Quinn kneels down in the starting blocks, her mind and heart are racing. But once the gun goes off, her body slips into autopilot, a type of flow, and she does what she does best. This past summer what she did was win a gold medal, becoming the first Afro-Latina to do so while representing her mother’s native Puerto Rico.
SOCIETY・1 DAY AGO
The Independent

Japan’s Hitomi Hatakeda pulled out of the women’s all-around final at the 2021 World Artistic Gymnastics Championships after the 21-year-old suffered a serious spinal injury during a training fall, the Japan Gymnastics Association said. Hatakeda, who appeared at the Tokyo Olympics, injured her spine while training on the uneven bars...
SPORTS・1 DAY AGO

Dustin Johnson has expressed a strong interest in becoming the US Ryder Cup captain one day and he is confident that he would be a successful leader. The former World No. 1 was the MVP for America at Whistling Straits. Steve Stricker chose him in all five matches and he delivered maximum points, becoming only the second American player to do so since 1979.
GOLF・8 DAYS AGO
golfmagic.com

Harris English was almost the victim of an extraordinary and unexpected rules infringement during the Ryder Cup where his putter grip was called into question. English was making his debut at the Ryder Cup at Whistling Straits and someone had noticed that the grip of his putter was in horrific condition.
GOLF・14 DAYS AGO
Sports Illustrated

In this new episode, Collin Morikawa’s caddie, J.J. Jakovac, shares what it was like inside the ropes for Team USA’s win and celebration at the Ryder Cup. He even shares fun insight into the way Assistant Captain Phil Mickelson added his personality to the team. This included some color commentary over the team’s radio. “I can’t really repeat much of it, but he was definitely auditioning for an NBC commentating job at some point down the line because it was pretty funny stuff. Phil was having fun,” Jakovac said.
GOLF・14 DAYS AGO
thednvr.com

The Boys are back after working their bags off for 2 weeks. First a discussion of the USA’s absolute beatdown of the European team in the Ryder Cup at Whistling Straights. Then, they hosted the Keith’s Cup which is Spring Valley’s version of the Ryder Cup where Spencer and Mitch play against each other with 22 members from Spring Valley Men’s League. Spencers team prevailed but Mitch got the better of him in 2 of the 3 days. Spring Valley also hosted the CHSAA 3A State Championship Monday and Tuesday- which turned out to be a complete train wreck. They finish the pod with a new segment called fairway or fore- where the Golf Bros give their opinions on various topics such as Denver sports, the Golf World, or random life choices and determine if their in line (Fairway) or out of line (Fore)
GOLF・14 DAYS AGO

Moortown: The original Ryder Cup host's history-laden past is a gift that keeps giving

Moortown has been on the must-play list of every serious golfer since it was crafted by Dr Alister MacKenzie in 1909 and then hosted the Ryder Cup 20 years later. Moortown is a classic moorland golf course with lovely peaty turf that provides the bouncy cushion-effect when walking. The fairways appear wide and inviting, with many of the holes flanked with silver birch, gorse, and heather. But don’t be fooled, Moortown is no pushover; this golf course is tough and exacting.
GOLF・14 DAYS AGO
NBC Sports Chicago

There was decidedly little drama on the final day of this year’s Ryder Cup. The U.S. led by six points entering singles before closing out a record 19-9 victory. But that doesn’t mean that Sunday was entirely devoid of suspense. For Harris English, it all started two hours before his tee time when his phone rang.
GOLF・13 DAYS AGO
Golf.com

No one knows exactly why this year’s U.S. Ryder Cup team was so dominant. Yes, they were the superior team on paper, but that is almost always the case, and in recent times Team Europe has had no problem outperforming expectations. The truth is many different factors led to the...
GOLF・14 DAYS AGO

For the first time ever, a team coming from the NASCAR Whelen Euro Series and from the Netherlands will enter the NASCAR Cup Series in the United States. Team Hezeberg, the joint effort between racing legend Toine Hezemans and Dutch entrepreneur Ernst Berg will field the #27 Hezeberg Ford Mustang in the 2022 NASCAR Cup Series with the technical support of Mooresville-based Reaume Brothers Racing. The plan is for 2019 NWES champion Loris Hezemans to drive a partial schedule including all the road courses on the calendar and potentially more ovals when approved by NASCAR.
MOTORSPORTS・12 DAYS AGO
Sporting News

Canada men's national team at the FIFA World Cup? Here's yet another reason for fans to be optimistic

Fans who have watched the Canadian men's national team's matches during the final round of World Cup qualifying probably have measured excitement about what they've witnessed thus far: The team has dominated large swaths of all five matches and deserve more than the seven points it has collected thus far.
FIFA・10 DAYS AGO
golfmagic.com

Viktor Hovland admitted that "it sucked" to lose the Ryder Cup in the fashion that Team Europe did. They were completely demolished 19-9 by America, which was a record win. Hovland was one of the leading hopes for Padraig Harrington's team at Whistling Straits, ranked as the second-highest European player in the world, but even he could not hold back the American tide.
GOLF・13 DAYS AGO
USA TODAY Sports Media Group

Europe's Viktor Hovland focuses on positives from 19-9 drubbing to the U.S. in Ryder Cup

LAS VEGAS – Viktor Hovland is not sulking. He isn’t breaking out in anger thinking about what might have been. He’s not kicking himself for not doing more. Yes, being on the losing side in his first Ryder Cup still stings, but the 24-year-old who is wise and mature beyond his years has chosen to soak up the positives instead of immersing himself in the negatives of Europe’s humbling 19-9 defeat to the U.S. two weeks ago in Wisconsin.
GOLF・14 DAYS AGO
Golf Digest

LAS VEGAS — Perhaps the best part of this past Ryder Cup, outside of the dominant American team win, was the way they celebrated it as a group afterward. The post-victory press conference was a treasure trove of great moments, none more out-of-the blue than Xander Schauffele puffing on a cigar, grinning from ear to ear and winking at somebody in the room.
GOLF・9 DAYS AGO
Macomb Daily