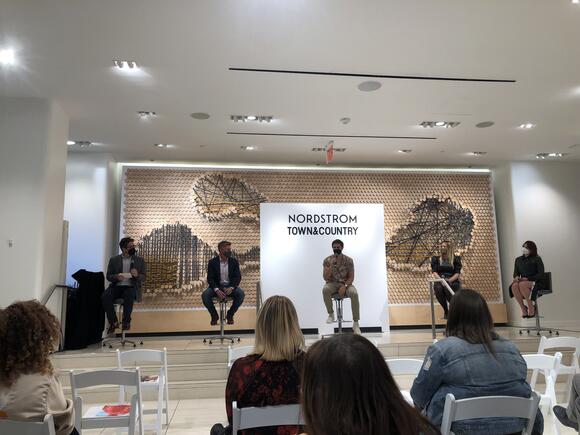 Broadway’s reopening will bring “Jagged Little Pill” back to the Broadhurt Theatre on October 21, marking the play’s first show since March 2020. Naturally, the cast is thrilled to be back.

“It’s something that I find so special about theater in general, is that it is all of these people, in the same room, sharing an experience,” said Sean Allan Krill, nominated for Best Featured Actor in a Musical for his role as Steve Healy.

“Jagged Little Pill” notably incorporates topics ranging from assault to protests, which Derek Klena—nominated for a Best Featured Actor in a Musical for his performance as Nick Healy—believes audiences will see with new eyes after the past year. Klena notes the greatest obstacle will be “playing a little oblivious” to real-world issues in the play’s first acts, where characters are more innocent.

“I think the biggest challenge is going to be to remember that [our characters] are young, that we are unaware of so much of what’s gone on in this world,” said Klena. “We’ve experienced so much, and we know better, but that’s going to be the hard part of still bringing the truth to these roles and knowing that they haven’t learned that yet.”

However, as the Tony Awards and Broadway both return this fall, the “Jagged Little Pill” cast is thrilled to reunite and celebrate live theater together.

“I think it just got all of us together and reminded us that there was a time where you could, six nights of the week, go see a Broadway show and watch people live out their dreams in front of you,” said Kathryn Gallagher, who’s role as Bella Fox earned a Best Featured Actress in a Musical nomination. “I think that having the Tony’s, even in the pandemic, even throughout everything, [is] just this reminder that there are always great stories to be told.”

All products and services featured are independently chosen by editors. However, FN may receive a commission on orders placed through its retail links, and the retailer may receive certain auditable data for accounting purposes. Coach made headlines this week from a widespread TikTok video that claimed the luxury brand damaged...
BEHIND VIRAL VIDEOS・3 DAYS AGO
Footwear News

The Salvatore Ferragamo Group is bulking up its management team. Daniella Vitale will join the company as chief executive officer North America effective Oct. 18, while Vincenzo Equestre took on the position of CEO Europe, Middle East and Africa on Oct. 7. This marks a return to Ferragamo for Vitale,...
BUSINESS・3 DAYS AGO
Decider

‘Diana: The Musical’ Is Now Streaming on Netflix Ahead of It’s Broadway Debut

Prince William and Prince Harry Slam BBC's Princess Diana Interview: "Our Mother Lost Her Life Because of This" While you count down the days until you can watch Kristen Stewart play Princess Diana in Spencer, Netflix has some new Diana content you can watch right now: Diana The Musical, a filmed recording of the stage musical that will open on Broadway in November.
MOVIES・14 DAYS AGO

June 9, 2019 - The 73rd Annual Tony Awards take place. The awards are presented by the American Theatre Wing and The Broadway League. Only productions staged in designated Broadway theatres are eligible for nominations. The musical that holds the record for most Tony Awards is "The Producers," in 2001....
CELEBRITIES・12 DAYS AGO
NJ.com

These 13 shows are returning to Broadway in October

Fresh off the 2021 Tony Awards, there’s buzz on Broadway, and it’s a fun time to head into New York to catch a show now that theater is back. The only problem is trying to decide just which show to see. Many Broadway productions already have returned from the long,...
NEW YORK CITY, NY・13 DAYS AGO
TheWrap

Broadway’s “Aladdin” has canceled Wednesday night’s performance because of COVID-19 breakthrough cases one day after the Disney show’s return from an 18-month shutdown. “Because the wellness and safety of our guests, cast, and crew are our top priority, tonight’s performance, Wednesday, September 29th, is canceled,” the production said in a...
PUBLIC HEALTH・16 DAYS AGO
KMTV 3 News Now

'Curtains up' at Orpheum with return of Broadway

Curtains are up at the Orpheum Theater once again for a season of Broadway shows after an 18-month intermission.
OMAHA, NE・14 DAYS AGO

GREENVILLE, S.C. — Sally Cade Holmes is busy packing her bags at her home in Morningside Heights, New York City. She's had a hectic week, picking up a second Tony Award for her latest Broadway production, "The Inheritance." "Honestly, it makes me want to keep going more," the Anderson native...
ANDERSON, SC・14 DAYS AGO
pghintheround.com

Tonys’ journey to the past while celebrating Broadway’s comeback

There was a moment during the CBS portion of the Tony Awards, when host Leslie Odom Jr.shifted the focus on the masked audience.The point was: Get used to it.This is what Broadway theaters, and responsible venues everywhere, will look like for the foreseeable future. It was just days later that...
PITTSBURGH, PA・11 DAYS AGO
PBS NewsHour

Melanie Saltzman reports, shoots and produces stories for PBS NewsHour Weekend on a wide range of issues including public health, the environment and international affairs. In 2017 she produced two stories for NewsHour’s “America Addicted” series on the opioid epidemic, traveled to the Marshall Islands to report on climate change, and went to Kenya and Tanzania to focus on solutions-based reporting. Melanie holds a BA from New York University and an MA in Journalism from Northwestern University, where she was a McCormick National Security Fellow. In 2010, she was awarded a Fulbright scholarship in Berlin, Germany.
BROADWAY, VA・12 DAYS AGO
Showbiz411

Broadway is getting what can only be called a treat. Tony Goldwyn will direct and Savion Glover will direct a newish version of “Pal Joey,” the famed musical from Richard Rodgers and Lorenz Hart, with a book by the also late, great John O’Hara. They’ve gotten permission to change one...
THEATER & DANCE・11 DAYS AGO

'A new normal': Broadway casts, crews return to the stage after COVID shutdown

"The Phantom of the Opera" haunts. "The Lion King" roars. And "Harry Potter and the Cursed Child" will dazzle. Yes, Broadway shows are finally back after shutting down March 12, 2020, because of the COVID-19 pandemic – with plenty of requirements for stars and theatergoers, including vaccinations. Casts and crews...
THEATER & DANCE・10 DAYS AGO
Middletown Press

Uzo Aduba on Returning to Broadway in New Play 'Clyde's': 'This Is My Lifeblood'

In the play, Aduba stars as Clyde, the owner of a truck-stop sandwich shop staffed by formerly incarcerated people. “Clyde’s,” with a cast that also includes Ron Cephas Jones, Reza Salazar, Kara Young and Edmund Donovan, is set to open at the Second Stage’s Hayes Theater on Nov. 23. Previews begin in less than a month, which seems like a lifetime when planning live entertainment during a pandemic.
MOVIES・9 DAYS AGO
ABCNY

Sara Bareilles said the show has changed her life and helped her cope with the COVID-19 pandemic, including the death of Nick Cordero.
NEW YORK CITY, NY・10 DAYS AGO
Broadway.com

Adrienne Warren in "Tina: The Tina Turner Musical" (Photo by Emilio Madrid for Broadway.com) The wheels keep on turnin' as Tony winner Adrienne Warren leads the company of Tina: The Tina Turner Musical back to Broadway's Lunt-Fontanne Theatre on October 8. As previously announced, Nkeki Obi-Melekwe will take on the title role beginning November 2.
MOVIES・7 DAYS AGO
NWI.com

Broadway in Chicago's opening of 'Rent' a real celebration

The "Rent" 25th Anniversary Farewell Tour opened Tuesday at the CIBC Theatre. The production continues to Oct. 10. Not only was it cause for celebration that "Rent" was back in town, but it's also the first show to be performed on Broadway in Chicago's new season schedule of productions presented in downtown theaters.
CHICAGO, IL・8 DAYS AGO
Showbiz411

This is going to be interesting. Emmy winner Jane Lynch can do anything, she’s a comic genius. Now we’ll find out if she can sing. Lynch has been announced to play Fanny Brice’s mother in the first ever Broadway revival of “Funny Girl.”. Lynch will play Fanny’s mother. Of course,...
MOVIES・9 DAYS AGO
pomona.edu

As a student at Pomona College, David Callander ’88 had his eyes on the lights of Broadway. Together with his theatre friends, he cleared out a little-used storage space in the old Edmunds Union, built a stage, added tables and founded Campus Cabaret, a company that would stage a dozen productions, including the Stephen Sondheim musical Company directed by Callander at Scripps’ Garrison Theater.
CLAREMONT, CA・9 DAYS AGO