Croatia: History and beauty merge on its island rich coastline

By By Matt Markey / The Blade
The Blade
27 days ago 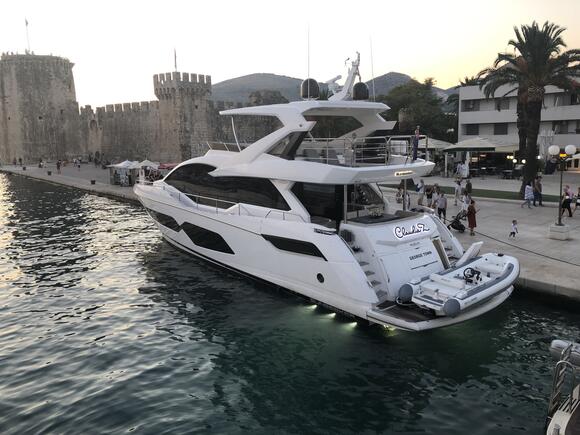 SPLIT, Croatia – When the Roman emperor Diocletian decided it was time to retire, he did not choose to settle in Verona, Alexandria, or Rome. He found a place more beautiful, where the sea and the rugged landscape are married in a topographically unique merger, here, on the picturesque coastline of what has become modern-day Croatia.

The endless aquamarine waters are dappled with islands, some rocky and barren, some heavily forested, and some home to quaint fishing villages. Around 295 A.D., the beauty and natural wonders of the region seduced the emperor. That seduction continues today for tourists from all over the world that happen upon Croatia's Dalmatia – that narrow strip of paradise defined by limestone cliffs, gorgeous shoreline, and a generous scattering of islands.

The spectacular palace that slave labor built for Diocletian in the third and fourth centuries encompassed more than seven acres and included his ostentatious living quarters, three temples, a grand mausoleum, and an expansive courtyard. Much of the palace was constructed of locally mined marble and satiny pure white limestone from the nearby island of Brač – the same stone that was used in the construction of the White House.

The remains of the 1,700-year-old Diocletian's Palace are the showpiece of the many Roman historic sites and ruins found along Croatia's Adriatic coast. Today, about 3,000 people live inside the walls of the palace, which is surrounded by shops and open-air restaurants that cater to the busy tourist traffic, much of which arrives in Split by boat.

If the castles, ancient ruins, and stunning scenery of Croatia's Dalmatian region seem to closely resemble the set for a Hollywood production, the producers of the mega-popular Game of Thrones series felt the same way. Diocletian's palace was used as the bastion of Queen Daenerys, the Mother of Dragons.

Down the coast in Dubrovnik, the Old Town provided Game of Thrones with the primary setting for King’s Landing, a fictional city that was a stronghold of the Lannister family. Few modifications were needed since the fortifications of the large outer wall and the narrow streets ideally matched the show. The feature film Mama Mia 2, while set in the Greek Isles, was filmed on the Croatian island of Vis.

Croatia's Adriatic coast is draped with islands that are the jewels of the region. Hvar, with its extensive fields of lavender, groves of ancient olive trees, and hillside vineyards, is generally recognized as one of the 10 most beautiful islands in the world, and one of the sunniest.

Korcula is an island with medieval squares, churches, palaces, and old stone homes, one of which is believed to be the birthplace of the explorer Marco Polo. The cathedral in the center of town was built in the 15th and 16th centuries.

The 40 Most Beautiful Islands in Europe

No matter the time of year, we're dreaming of a seaside escape or a fairytale-status European adventure. So we rounded up the 40 best islands across Europe, including popular destinations everyone should see in their lifetime and hidden gems you may not have heard of yet. From sun-soaked shores to rocky winter beaches to colorful cliffside locales, these European island destinations belong on your bucket list. Ready, set, start island hopping.
TRAVEL・11 DAYS AGO
AFAR

Call of the Wild: Exploring the Beauty of South Georgia Island

South Georgia Island is rugged, remote, and home to large colonies of seabirds and penguins. On an isolated island in the southern waters of the Atlantic Ocean, untrammeled landscapes—and curious bird life—abound. Each year, millions of birds return to breeding colonies on a remote island roughly 1,300 miles from the...
GEORGIA STATE・4 DAYS AGO
ELLE DECOR

See How This Russian Designer Merged History With Humor High Above St. Petersburg

When Maria Grudina first saw Russian House, a complex of 395 apartments in the center of St. Petersburg, she was enchanted. Designed to suggest an old Russian palace, complete with elaborate stonework and fairy-tale turrets, the residence is one of the city’s most talked-about new buildings. Grudina and interior designer Tim Veresnovsky visited an apartment on the top floor. “It was the princess’s tower that every girl dreams about from childhood,” says Grudina, the cofounder of a health-care resort who has three young daughters.
DESIGN・3 DAYS AGO
Sunderland Echo

Shots show the beaches in their current glory of blue seas and golden sands, but artists have reimagined these to highlight serious impact litter could have on the landscape. Brighton’s iconic pier is overshadowed with mounds of coffee cups, crisp packets, cans and carrier bags – to name a few of the items commonly left behind on beaches.
ENTERTAINMENT・12 DAYS AGO

Often dubbed the most beautiful coastline of China, Xiapu also has an extensive network of small rivers flowing into the sea, and the riverbanks have been utilized by the thriving aquaculture industry of the region. The unique marine culture in Xiapu in the Fujian province of China has been thriving...
ENTERTAINMENT・5 DAYS AGO
KRQE News 13

(THE CONVERSATION) Most perfume ads suggest that the right scent can make you sexy, alluring and successful. A blend by Black Phoenix Alchemy Labs, meanwhile, offers to make you smell like Hecate, the three-faced Greek goddess of witchcraft. As a classics scholar who studies both magic and the senses in the ancient world, this idea of a witch-inspired […]
LIFESTYLE・17 HOURS AGO
Riverhead News-Review

I soon discovered a great deal of magic on my Island home. Many people sought me out because I was a poet, not just the local dentist. I was getting well known off Shelter Island and among the large community of artists who lived on the East End. I was...
ENTERTAINMENT・6 DAYS AGO
hypebeast.com

Designer Rich Holland of Floda31, a Sweden-based creative and collaborative house, linked up with. to give its Netherlands European Headquarters a new sense of energy that brings together like-minded individuals through a skate landscape. The Birmingham-born creative shaped up a space that is anything but a traditional skatepark that bridges the entire campus together from the sports facilities to the offices.
DESIGN・13 DAYS AGO

Inspired by the labyrinth wonder of Xavier Corberó and a wild Moroccan coastline, Moscow tea bar Vodniy is an aesthetic beauty...

Inspired by Catalan artist, Xavier Corberó i Olivella, in particular his ‘labyrinth’ home in the suburb of Esplugues de Llobregat, Barcelona, Vodniy Tea Bar is an eclectic place in Moscow for customers to enjoy good food and herbal drinks. All in a space that combines round openings and high arched portals; details that nod to the oriental labyrinth city and the poetry of architectural forms of Corberó’s legendary house.
HOME & GARDEN・5 DAYS AGO
Riverhead News-Review

There are two inescapable certainties of life, as Ben Franklin famously said, and a recently-surfaced document from long ago shows that the tax collector was busy even during the earliest days of Shelter Island. It also sheds light on a mostly forgotten conflict on North American soil, alternatively called “The...
SUFFOLK COUNTY, NY・13 DAYS AGO
Variety

‘Becoming Cousteau’ Review: An Immersive Deep Dive Into the Life of Jacques Cousteau, the Undersea Visionary

Jacques-Yves Cousteau had one of those faces that seemed to come from an earlier time — before the world wars, maybe even before the 20th century. It was a face so thin and tapered yet open, so creased with character, so French. The hawkish Gallic nose. The Aznavour eyes. The big wide stretchy geek smile that seemed to grin back at the entire world. (By the late ’60s, he was doing just that.) Cousteau didn’t just popularize undersea diving as we know it; he created it. To accomplish what he did, he needed to be an athlete, a scientist, an...
CELEBRITIES・2 DAYS AGO
ABC7

City of Orange locals share what they love most about thee historic small town.
ORANGE, CA・2 HOURS AGO

It's easy to miss the poems carved into the walls of the immigration station on Angel Island in the middle of the San Francisco Bay. But if you look carefully, thousands of Chinese characters start to emerge from the dingy layers of green and yellow paint. The roughly hundred-year-old verses tell a little-known story of what happened to many Chinese immigrants when they tried to get into the country at a time when they were not welcome here.
MUSIC・1 DAY AGO
CBS 42

IFC Films has acquired U.S. rights to “Official Competition,” Mariano Cohn and Gastón Duprat’s colorful film with Penélope Cruz and Antonio Banderas. Represented in international markets by Protagonist, the film world premiered at Venice in competition and earned unanimous praise. Written by Cohn and Duprat, the movie stars José Luis Gómez as an octogenarian millionaire pharmaceutical tycoon who decides to finance a great work of cinema after surveying his legacy and finding it lacking in prestige. He purchases the rights to a Nobel Prize–winning novel about sibling rivalry and entrusts the property to enigmatic auteur Lola Cuevas (Cruz). A visionary conceptualist with...
MOVIES・2 DAYS AGO
24/7 Wall St.

This Dog Stays a Puppy the Longest

Puppies, according to some experts, age at different rates. One set of experts even offers a puppy age calculator that allows owners to estimate how long they can expect their dogs to stay puppies. 24/7 Tempo set out to identify the breed that stays a puppy the longest. We compiled the list based on a […]
PETS・1 DAY AGO
RideApart

Go Back In Time With This Documentary On Montesa's Rich History

Montesa may not be an instantly recognizable brand, especially if you fall on the younger side of the spectrum, and aren't too hot about off-road. In Spain, however, this company serves as not just a popular motorcycle manufacturer, but as a cultural hallmark, too. Montesa recently celebrated its 75th anniversary, with several events and special-edition releases in celebration. As it would turn out, the fanfare is far from over.
CARS・10 DAYS AGO
finegardening.com

My name is Zarko Mudrovcic, and my garden is situated in Marija Gorica, 30 kilometers from Zagreb, the capital of Croatia, in the southeastern part of Europe. Today I am sharing some beautiful pictures of my favorite peonies (Paeonia hybrids, usually Zones 3–8). These very large, bright yellow double blossoms...
GARDENING・4 DAYS AGO
dicksonpost.com

Anyone who didn’t go to the bicentennial celebration of Lonesome Pioneer Park in Burns last Saturday missed a fun-filled day. If you’ve never been to Lonesome, you really should go. It is most likely the oldest home still standing in Dickson County. Built around 1819, it was the home of...
DICKSON COUNTY, TN・10 DAYS AGO
wyso.org

'The Land of Funk' celebrates its place in music history

Dayton has a lot of funk festivities going on this fall, and the first of those events was the renaming of a downtown street. On Thursday afternoon, a large group gathered downtown to unveil a new street sign. What used to be Stone Street is now officially “Land of Funk...
DAYTON, OH・8 DAYS AGO