By rebecahjacobs
Bossip
27 days ago 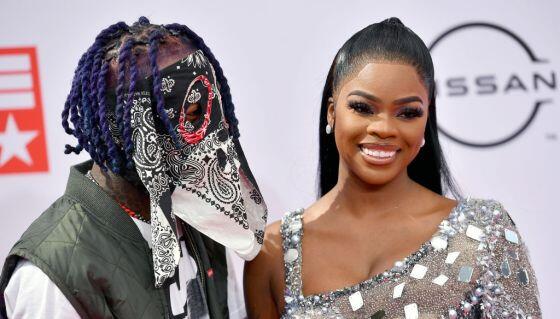 JT is finally addressing the ongoing rumor that she’s pregnant, clearly over the constant speculation about her uterus online. 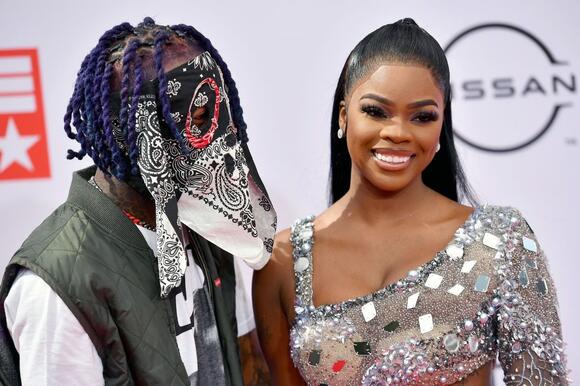 Earlier in the month, one half of City Girls sparked rumors that she was pregnant after she posted a selfie wearing a bracelet which, upon closer inspection, fans matched to an anti-nausea wristband commonly used to treat morning sickness during pregnancy.

That “proof” was all social media needed in order to start speculating that JT and her boyfriend, Lil Uzi Vert , were expecting a baby. Plus, like with any other pregnancy rumor, fans started to look at her appearance during recent performances as further proof that she was expecting a child.

So, as this rumor is circulating throughout the internet, Uzi posted a video of his girlfriend and covered her belly with a heart-eyed emoji–which many fans saw as the nail in the coffin. After that, with all of her followers now as sure as they can be that JT is pregnant, the rapper decided to set the record straight once and for all.

“It’s getting weird!!!!” she wrote, going on to explain why the emoji was put over her stomach. “I told [Uzi] put an emoji there because my pants were dirty but I still liked the video I shouldn’t even have to constantly tell a bunch of strangers I’m not hiding s**t!!!!”

She continued, “I’m not pregnant now leave me the hell alone!”

After that, JT took to Twitter for more, slamming those who assume she’s pregnant just because she’s treating her nausea. She also spoke out against everyone criticizing her body, saying they’re making her feel weird about herself.

“B****es can’t even use emojis no more! I let y’all rock cause on some serious s**t if I was pregnant what y’all gone do? Nothing!” she wrote in a now-deleted tweet. “As a women half y’all hoes need to go educate y’all self.”

JT continued, “Nausea not only caused by pregnancy! & the way I control my nausea shouldn’t be y’all business! Right had me feeling weird about my body I think I’m fine mf’s calling me pregnant.”

And there you have it: she’s not pregnant.

Ashley Jones is not pregnant and wants people to stop worrying about her uterus. The Teen Mom 2 star recently had a Q&A with fans on her Instagram stories. Jones is already the mother of four-year-old Holly, whom she had during Teen Mom: Young and Pregnant. Jones has been in an on-again-off-again relationship with Holly's father, Bar Smith. On the last season of Teen Mom 2, the couple got engaged.
CELEBRITIES・13 DAYS AGO
Complex

Lil Uzi Vert has once again been spotted at a wedding, surprising guests at a Cambodian couple’s ceremony in his hometown of Philadelphia this past week. In clips posted to social media by guests at the wedding, Uzi could be seen gifting cash to the married couple, and dancing around with a huge smile on his face.
CELEBRITIES・12 DAYS AGO
hotnewhiphop.com

Sound the alarms: new Uzi is on the way. This weekend, after the Luv Is Rage rapper popped up at a Cambodian couple's wedding in Philly,Lil Uzi Vert was stopped by cameras and asked a handful of questions including one inquiry about the whereabouts of The Pink Tape. The Pink...
CELEBRITIES・11 DAYS AGO
HipHopDX.com

Philadelphia, PA – Lil Uzi Vert really does do what he wants — and that includes crashing weddings. Back in August, Baby Pluto made headlines after he popped up at a Palestinian couple’s wedding ceremony held in New Jersey, where he was seen dancing joyously with wedding guests while donning a traditional black keffiyeh around his neck.
PHILADELPHIA, PA・12 DAYS AGO

With several blockbuster rap albums on the horizon, it looks like Lil Uzi Vert might have dropped a big clue regarding when his upcoming project might be released. In a video posted by DJ Akademiks, Uzi is asked by someone when his next project is coming out, and the rapper gives a surprisingly candid answer to the question. “Where the next project though?” someone can be heard asking who’s not in the frame. Uzi responded to the fan, revealing a possible timetable for when it will release.
CELEBRITIES・11 DAYS AGO
kezi.com

Eve reveals pregnancy on Instagram: 'We finally get to tell everyone!'

Eve is definitely feeling satisfaction... The hip-hop queen, 42, announced Friday she's expecting a child with husband Maximillion Cooper. "Can you believe it... we finally get to tell everyone!!!!! You all know how long we've been waiting for this blessing!!!" she wrote on Instagram, alongside a photo showing off her baby bump.
CELEBRITIES・7 DAYS AGO
Complex

Lil Uzi Vert’s Pink Tape project will arrive later than expected. During a recent encounter with fans, the Philadelphia rapper was asked if his much-anticipated mixtape would arrive before October’s end. Though his answer was disappointing, Uzi reassured everyone that Pink Tape would be worth the wait. “No it’s not,”...
CELEBRITIES・5 HOURS AGO
TVShowsAce

Kody and Robyn Brown appear to be drowning in debt as the family breaks apart. Fans have long considered Meri and Christine Brown to be cash cows for Kody. This is especially true of Meri as she’s extremely successful with multiple businesses doing very well. For the most part, no...
CELEBRITIES・1 DAY AGO

Nicki Minaj took to Instagram to share a video of several wrapped Givenchy gifts Lil Wayne sent her for her son, who just turned one on Sept. 30, and admitted she’s in ‘shock.’. Nicki Minaj, 38, got the surprise of a lifetime when her pal Lil Wayne, 39, sent a...
CELEBRITIES・17 DAYS AGO
TVShowsAce

Everybody knows about Kawhi Leonard's prowess on the basketball court. From winning Finals MVP after guarding Miami Heat-era LeBron for an entire series back in 2014, to his legendary championship run in Toronto in 2019, Leonard has cemented himself as one of the greatest basketball players of the modern era, and arguably of all-time.
MUSIC・4 DAYS AGO
BlackAmericaWeb

Lil Durk and India Royale let the world know they are still very much together.
CELEBRITIES・1 DAY AGO

Jesy Nelson wants to address the rumors surrounding her seemingly darker complexion in her debut solo video “Boyz” with Nicki Minaj. “I personally want to say that my intention was never, ever to offend people of color with this video and my song because like I said, growing up as a young girl, this is the music that I listened to,” Nelson, 30, told Minaj, 38, during an Instagram Live on Monday per Page Six.
MUSIC・11 DAYS AGO
nickiswift.com

This Is What 50 Cent Wants To Do With Nicki Minaj

50 Cent has now revealed what his dream collaboration with Nicki Minaj would be. In the past, 50 admitted that he's a big fan of hers. "She has a lane that's been closed that she just busted open on her own, and she's an amazing talent," he told MTV in 2010. "A lot of artists, I personally am not excited by, but her, particularly, she impressed me on that 'Bottoms Up' remix."
CELEBRITIES・22 DAYS AGO
People

Bella Kidman Cruise was a contributing artist at Courtney Love's art exhibit in London with all proceeds going to charity. Bella Kidman Cruise made a rare public appearance to celebrate the 30th anniversary of Hole's Pretty on the Inside album. On Thursday, she was spotted at the event alongside tattoo...
CELEBRITIES・22 DAYS AGO
nickiswift.com

Before becoming the Duchess of Sussex, Meghan Markle initially rose to prominence through her time in Tinseltown. Starring as Rachel Zane in USA Network's "Suits," the former actor appeared in the show's first seven seasons before uprooting her life for royalty. She has also made appearances in prominent programs such as "90210," "CSI: NY," and "CSI: Miami," along with film appearances in "Get Him to the Greek" and "Horrible Bosses."
CELEBRITIES・11 DAYS AGO
97.9 The Beat

Follow The Beat On Twitter: Follow @’979thebeat’. Welp the cats out of the bag. If you haven’t heard yet but the Trinidad Emcee has had a wild and interesting childhood. Press play and listen to who , what, & where this confessed. cheating took place. Nick Minaj seems to still...
TRINIDAD, TX・12 DAYS AGO
Hello Magazine

Vin Diesel has walked Meadow Walker down the aisle, eight years after the death of her father Paul Walker. Paul and Vin starred together in the Fast and Furious franchise, and Vin was named her godfather at her birth. Now, Meadow has revealed the actor walked her down the aisle during her October wedding to actor Louis Thornton-Allan.
CELEBRITIES・1 DAY AGO
Popculture

Rapper Offset had a lavish birthday gift for his wife Cardi B this week: a 6-bedroom mansion. Cardi B revealed the extravagant gift in an Instagram video, complete with a tour of the property and an explanation of the thought that went into it. She apparently intends to rent out the home for short-term vacations.
CELEBRITIES・10 DAYS AGO