Pelosi on infrastructure bill: 'I'm never bringing a bill to the floor that doesn't have the votes'

The Hill
28 days ago 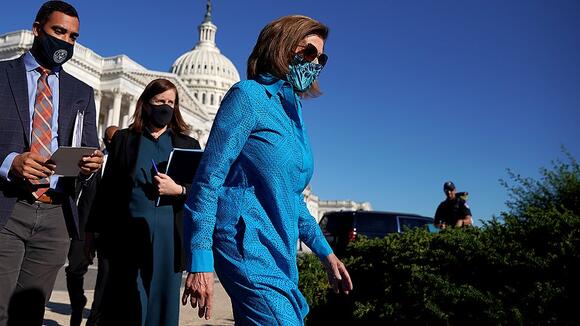 Speaker Nancy Pelosi (D-Calif.) said when asked Sunday about a vote on Senate-passed bipartisan infrastructure legislation that she is "never bringing a bill to the floor that doesn't have the votes."

"Let me just say we're going to pass the bill this week," Pelosi said on ABC's "This Week."

Pelosi acknowledged that the bill's language included a commitment to bring it to the floor for a vote on Monday.

"You cannot choose the date. You have to go when you have the votes," Pelosi added, citing the failed Republican effort to overturn the Affordable Care Act on the anniversary of that legislation.

Pelosi added that the vote "may be" Monday, but only if she had the votes to pass it.

“Monday is an arbitrary deadline. There is no reason to bring it up. It's just an attempt to pass one bill and leave behind the bill that has the majority of the president's agenda,” Jayapal said last week on “CNN Newsroom.”

While moderates say the bipartisan infrastructure bill should move forward ahead of the proposed $3.5 trillion Democratic spending plan, progressive leaders in the House say they will not vote for the bipartisan legislation unless it comes with the larger reconciliation package.

"We just have some of the last decisions to be made," Pelosi said Sunday, adding that the bill was "bigger than anything we have ever done."
CONGRESS & COURTS・8 HOURS AGO
TheAtlantaVoice

House Speaker Nancy Pelosi on Sunday suggested that the budget reconciliation process could be one way toward raising the debt ceiling in December. “That’s one path. But we’re still hoping to have bipartisanship,” Pelosi told CNN’s Jake Tapper on “State of the Union.” In September, Pelosi previously said raising the debt ceiling would not be done through reconciliation as part […]
CONGRESS & COURTS・5 HOURS AGO
AOL Corp

Democrats 'pretty much there' on social spending bill: Pelosi

WASHINGTON (Reuters) -Democrats have almost reached an agreement on a pared-down social spending bill that contains some of U.S. President Joe Biden's priorities and plan to vote on that and an infrastructure bill in the coming week, House Speaker Nancy Pelosi said on Sunday. "I think we're pretty much there...
CONGRESS & COURTS・7 HOURS AGO
UPI News

Pelosi: 90% of social spending bill 'agreed to and written'

After months of fierce political wrangling, US House Speaker Nancy Pelosi said Sunday she expects agreement on a huge social spending package and a vote on a cross-party infrastructure bill this week, adding: "We're almost there." Asked on CNN's "State of the Union" whether the agreement on the spending package and votes on infrastructure could occur in the coming week, Pelosi replied, "that's the plan."
CONGRESS & COURTS・21 MINUTES AGO
WashingtonExaminer

Upon her return to Capitol Hill from a meeting at the White House on Friday, House Speaker Nancy Pelosi told reporters that a deal was within reach on congressional Democrats’ sweeping social spending package.
CONGRESS & COURTS・2 DAYS AGO
UPI News

Oct. 21 (UPI) -- House Speaker Nancy Pelosi said Thursday that Democrats were closing in on the framework for an expansive social spending bill. The bill, called Build Back Better, aims to fulfill many campaign promises of President Joe Biden and congressional Democrats by directing trillions of dollars toward social services, healthcare and other priorities.
CONGRESS & COURTS・3 DAYS AGO
Iowa State Daily

While Democrats attempt to get on the same page about a $3.5 trillion infrastructure bill, U.S. Sen. Chuck Grassley (R-IA) and the Republicans are in lock-step opposition to it. A smaller infrastructure bill worth $1.2 trillion was passed by the U.S. Senate, but House Democrats are refusing to vote on...
PRESIDENTIAL ELECTION・7 DAYS AGO

When asked this week about a recent poll that found only 10 percent of Americans know “a lot” about what’s in the $3.5 trillion reconciliation bill Democrats are proposing, a clearly frustrated Speaker Nancy Pelosi responded, “I think you all could do a better job of selling it, to be very frank with you.” The speaker added, “Because every time I come here, I go through the list: medical leave, climate, the issues that are in there.”
U.S. POLITICS・8 DAYS AGO
CNBC

Sen. Cassidy on infrastructure bill: Everyone should support it

Sen. Bill Cassidy (R-La.) joins CNBC's 'Squawk Box' to discuss the pending infrastructure bill and why House Republicans would take away the leverage of the progressive caucus by supporting it.
CONGRESS & COURTS・9 DAYS AGO
Newsweek

The $1 trillion infrastructure bill, which Sinema helped broker, was passed by the Senate in August but has yet to be taken up for a vote in the House.
CONGRESS & COURTS・10 DAYS AGO
AOL Corp

WASHINGTON — House Speaker Nancy Pelosi could have been speaking for the majority of Democrats in Washington when she said on Tuesday that she was “very disappointed” that President Biden’s domestic agenda will have to be pared down because of opposition from Democratic Sens. Joe Manchin of West Virginia and Kyrsten Sinema of Arizona.
CONGRESS & COURTS・12 DAYS AGO

Vice President Kamala Harris, at an event for the anniversary of Martin Luther King's monument in Washington, vows to keep fighting for voting access.
LOS ANGELES, CA・3 DAYS AGO
POLITICO

Axing either of the two provisions would infuriate progressives and alienate valuable voting blocs. Yet the party might just have to.
CONGRESS & COURTS・12 HOURS AGO
Fox News

The progressive senator is close to realizing many of his policy goals – but can he unite the party behind Biden’s plan?
CONGRESS & COURTS・16 HOURS AGO
NBC News

Sen. Joe Manchin, D-W.Va., is reportedly pushing back on parts of President Biden’s infrastructure bill that would tackle climate change as well as the child tax credit. NBC News’ Cal Perry is in Charleston, West Virginia, to explain how the senator’s constituents are reacting as the infrastructure bill remains in limbo. Oct. 22, 2021.
CHARLESTON, WV・2 DAYS AGO
TheAtlantaVoice

Democratic Senators Kyrsten Sinema and Joe Manchin are dominating Capitol Hill. Given the 50-50 split in the Senate, Democrats can’t afford to lose a single vote on the budget reconciliation bill — and Sinema and Manchin are using that leverage to force huge concessions from the Biden administration. Both Sinema and Manchin are insisting on paring down the overall cost […]
PRESIDENTIAL ELECTION・1 DAY AGO
CBS News

Moderate Democratic Senator Joe Manchin of West Virginia said Thursday he had offered to drop his formal affiliation with the Democratic Party and instead be independent if he were causing a "problem" for the caucus. He was asked by reporters at the Capitol about a report that he had threatened...
CONGRESS & COURTS・3 DAYS AGO