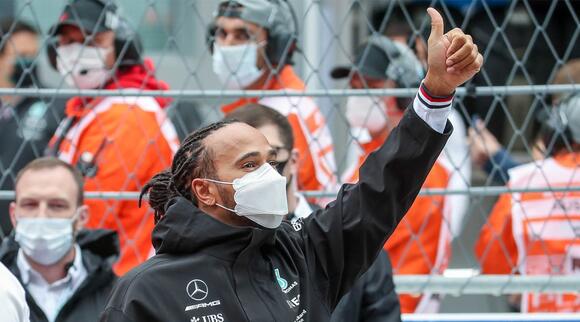 "It will come when it comes, but of course, I'll be giving it absolutely everything tomorrow, chasing that number 100," Hamilton said earlier this week when asked by reporters about the prospects of reaching the century win mark.

"It's a big number. It seems like it's taking longer than ever before to get it. It's a pretty cool number to wait for."

Hamilton's latest win comes amid a boom in the sport's popularity. Earlier this week, Reed Hastings, the CEO of Netflix, who has produced the hit docuseris Formula 1: Drive to Survive, spoke to German outlet D er Spiegel and said the company "would definitely consider" bidding for F1's streaming rights.

Also, this week, Formula One announced the dates and course for the 2022 Miami Grand Prix. This marks the first F1 race in Florida since 1959. The new track will be set within the city’s Hard Rock Stadium campus next May.

The reigning world champion was angry with his team's decision to pit late on but his team boss said the driver risked a "catastrophic" DNF.
MOTORSPORTS・5 DAYS AGO
bulletin-news.com

After winning the Russian Grand Prix on Sunday, Lewis Hamilton became the first Formula One driver to achieve 100 victories. Late in the race, the seven-time World Champion passed long-time leader Lando Norris. Norris, who had been leading for the majority of the race and was looking for his first Grand Prix victory, wrecked his McLaren in heavy rain.
MOTORSPORTS・10 DAYS AGO
ClutchPoints

Mercedes driver, Sir Lewis Hamilton, could have joined the most successful team in Formula 1, Scuderia Ferrari, but the timing never seemed right for both parties. When asked as to why the 7-time world champion never made the move to join Ferrari, he delves into his dream, along with any F1 fan for that matter, of driving for the famous Prancing Horses. Hamilton enjoys driving his Ferraris, but he acknowledges that he isn’t able to drive the one.
MOTORSPORTS・9 DAYS AGO
The Independent

Lewis Hamilton plays down F1 rivalry with Max Verstappen: ‘Whatever happens, we will shake hands’

Lewis Hamilton has played down any hostility with his rival Max Verstappen as they go toe to toe in the battle to be Formula One world champion. The duo have been involved in two major incidents, at Silverstone and Monza, which have influenced their burgeoning title race as the 25-year-old Vestappen chases his first world crown and Hamilton closes in on a historic eighth championship.
MOTORSPORTS・12 DAYS AGO

Lewis Hamilton finished fastest in first practice for the Turkish Grand Prix. The seven-time world champion, who will be demoted 10 places on the grid after taking on his fourth engine – one more than is permitted – finished four tenths clear of championship rival Max Verstappen. Charles Leclerc took...
MOTORSPORTS・8 DAYS AGO
motorsportmagazine.com

Lewis Hamilton has said that his fashion interest is helping take the weight off the intense championship battle with Max Verstappen that sees the pair separated by just two points, with seven races to go. The Mercedes driver said that he couldn’t let the “neck and neck” fight take over...
MOTORSPORTS・9 DAYS AGO
NBC Sports

With seven wins and 11 podiums in 15 races this year, Max Verstappen is heavily favored at PointsBet Sportsbook to win the F1 Turkish GP on October 10 in Istanbul, Turkey. Last year, Verstappen finished sixth in this race after starting on the outside of the front row. Of the...
MOTORSPORTS・10 DAYS AGO
The Independent

Lewis Hamilton took pole position for the Turkish Grand Prix with a new track record – but he will be thrown back to 11th following his engine penalty.The seven-time Formula One world champion delivered the quickest lap ever seen at the Istanbul Park to beat Mercedes team-mate Valtteri Bottas and championship rival Max Verstappen.But Hamilton, who holds a two-point advantage over Verstappen, will face danger from all angles during Sunday’s start after serving a 10-place penalty for using his fourth engine, one more than is permitted.Bottas will be promoted to the top spot with Red Bull’s Verstappen joining him on...
MOTORSPORTS・7 DAYS AGO

Mercedes star driver Lewis Hamilton speaks out after getting slapped with a 10-grid penalty at Formula 1’s Turkish Grand Prix. After his fourth ICE (Internal Combustion Engine) of the season, which is one more than what is allowed by the F1 regulations, Hamilton looks to limit the ensuing damage a 10-grid penalty can give.
MOTORSPORTS・8 DAYS AGO
The Independent

Lewis Hamilton took a caution-first approach in final practice for the Turkish Grand Prix The world champion completed just five laps at a rain-hit Istanbul Park, finishing 18th of the 20 drivers.Hamilton is facing a 10-place grid penalty for Sunday’s race after using his fourth engine of the season here – one more than is permitted.Here's how the final practice session played out...So what do you think ahead of qualifying? 🤔#TurkishGP 🇹🇷 #F1 pic.twitter.com/dVnl2vdCfr— Formula 1 (@F1) October 9, 2021AlphaTauri’s Pierre Gasly topped the order after the one-hour session was red-flagged when George Russell beached his Williams.The British driver lost...
MOTORSPORTS・7 DAYS AGO
People

"We hope to create a framework the wider education industry can implement," Lewis Hamilton, the seven-time Formula 1 champion, said. Lewis Hamilton is not only leading the pack in Formula 1 but also in efforts to recruit science, technology, engineering and mathematics teachers of color in England. Mission 44, the...
MOTORSPORTS・10 DAYS AGO
firstsportz.com

According to Dutch F1 journalist Jack Plooji, the two-time world champion Fernando Alonso holds a grudge against his former teammate in Mclaren, Lewis Hamilton. The most recent encounter between the Spaniard and the Brit was when the former held the reigning champion during Hungarian GP, ensuring that his current teammate Esteban Ocon register his first ever victory.
MOTORSPORTS・9 HOURS AGO

The man aiming to be the first non-Mercedes driver to win the title since 2013 said it would finishing second would still be a "great season."
MOTORSPORTS・8 DAYS AGO
ClutchPoints

Lewis Hamilton and other Formula 1 stars found the grip levels in Istanbul Park ‘much more enjoyable’ as compared to last year’s Turkish Grand Prix after Friday’s practice sessions. With the return of the Turkish GP in 2020, drivers all over the grid complained about the track having no grip...
MOTORSPORTS・8 DAYS AGO
The Independent

Lewis Hamilton has been warned by Mercedes team principal Toto Wolff that DNFs are a “no go” if the Briton is to retain his Formula One title.Hamilton’s championship victory last season saw him go level with Michael Schumacher on a record seven F1 titles, and the Mercedes driver holds a two-point lead over rival Max Verstappen with six races left this season.Hamilton, 36, beat the Red Bull driver to first place at the Russian Grand Prix last time out, but at the calendar’s previous event – the Italian GP – the pair took each other out of the race.That incident...
MOTORSPORTS・12 DAYS AGO
The Independent

A furious Lewis Hamilton surrendered the world championship lead to Max Verstappen after finishing fifth at the Turkish Grand Prix on Sunday.Valtteri Bottas took the chequered flag at a damp Istanbul Park ahead of Verstappen and Sergio Perez, with Ferrari’s Charles Leclerc fourth.But Hamilton, who started only 11th after an engine penalty, pointed the finger at his Mercedes team for putting him on to new tyres in the closing stages.Hamilton was on course to finish third with the same rubber he started the race on, before Mercedes’ safety-first approach.Hamilton questioned the decision to stop and snapped “leave me alone”...
MOTORSPORTS・6 DAYS AGO

Hamilton, in sublime form, topped Saturday's qualifying session but his 10-place grid penalty for a new Mercedes engine means he has a recovery mission on his hands to limit the damage in his title fight against Max Verstappen. But while the championship leader has several fast midfield cars between himself...
MOTORSPORTS・7 DAYS AGO
ClutchPoints

Max Verstappen still remains cautious amid Lewis Hamilton’s 10-place grid penalty after a thrilling Saturday qualifying session at the Formula 1 Turkish Grand Prix. Lewis Hamilton topped the timesheets with blistering pace and a ‘best-case’ scenario as he out-qualified fellow Mercedes teammate, Valterri Bottas, by a tenth of a second, before getting pushed back to 11th on the grid due to grid penalties.
MOTORSPORTS・7 DAYS AGO
NBC Sports

Seven-time Formula One champion Lewis Hamilton took his record-extending 102nd F1 pole position Saturday as the perfect way to limit the damage from a grid penalty of 10 starting positions in Turkey. Though Hamilton will start from 11th, he still is in a good position to score some big points...
MOTORSPORTS・7 DAYS AGO