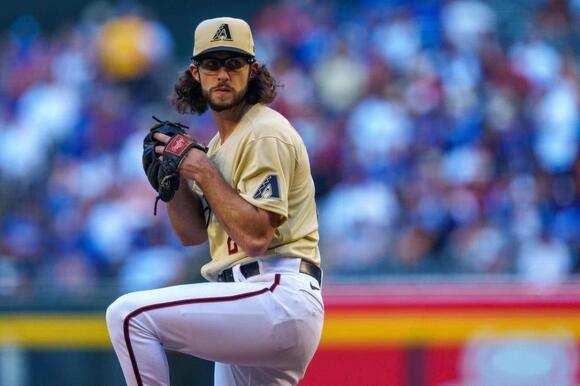 Zac Gallen got the better of a duel with Clayton Kershaw and the Arizona Diamondbacks earned a 7-2 victory Saturday against the playoff-bound Los Angeles Dodgers.

Gallen (3-10) gave up one run on just three hits over six innings, while Ketel Marte and Carson Kelly hit home runs as the Diamondbacks (50-105) won for just the third time in 18 games against the Dodgers this season. The teams will end their season series Sunday.

Trea Turner hit two home runs for the Dodgers (99-56), who lost for just the third time in their last 14 games. Los Angeles fell to 5-2 on their nine-game road trip.

Kershaw (10-8) gave up four runs (three earned) on six hits over 4 1/3 innings in his third start since returning from the injured list because of elbow inflammation. He threw 73 pitches after throwing 74 on Sunday at Cincinnati as he tries to build up his arm for the upcoming playoffs.

Kershaw’s three strikeouts gave him 2,669 for his career and moved him into sole possession of 26th on the all-time list.

Arizona took a 1-0 lead on Kershaw’s first pitch of the game when Marte went deep into the seats in left field for his 13th of the season. It was the first of three hits for Marte.

The Diamondbacks made it 2-0 in the second inning when Kelly hit Kershaw’s 1-0 pitch over the wall in left, also his 13th of the season.

Arizona increased the lead to 3-0 in the fourth inning when Christian Walker scored on a two-out throwing error from Dodgers third baseman Justin Turner. An RBI single from Daulton Varsho in the fifth inning gave the Diamondbacks a 4-0 advantage.

The Dodgers broke through against Gallen in the sixth inning on a home run from Turner. He hit another in the eighth, his 24th on the season, while also extending his hitting streak to 12 games. Mookie Betts’ hitting streak ended at 15 games after he went 0-for-3.

Arizona took a 5-1 lead in the seventh inning on a pinch-hit RBI single from Kole Calhoun and added two more runs on a single by David Peralta in the eighth.

Max Scherzer started the Wild Card game for the Los Angeles Dodgers tonight. He did not make it through the fifth inning. While Scherzer gave up just one run, Dodgers manager Dave Roberts pulled his ace with one out and two men on in the top of the fifth inning.
MLB・16 DAYS AGO
USA TODAY

Three of our six experts think the NL Central champions will go on to win the World Series.
MLB・15 DAYS AGO
FanSided

The Los Angeles Dodgers were in a load of trouble long before star third baseman Justin Turner collapsed in a heap, but the optics of his late-game injury certainly didn’t help matters in NLCS Game 4. After all, it’s difficult to muster up one more rallying cry when your de...
MLB・11 HOURS AGO
FanSided

The Los Angeles Dodgers are fighting the San Francisco Giants for the NL West title and one of their fans is fighting security inside Dodger Stadium. Dodgers fans are dealing with some tough injury news surrounding Clayton Kershaw who had to leave Friday’s start early and his postseason availability is in doubt.
MLB・20 DAYS AGO

Josh Donaldson has been following his former team rather closely this October and the former Atlanta Braves slugger and current Minnesota Twins third baseman had some thoughts about Tuesday’s Game 3 NLCS against the Los Angeles Dodgers. Donaldson was live-tweeting during the game and began to tear into the Dodgers...
MLB・3 DAYS AGO
KTLA

Behind the red-hot bat of Eddie Rosario, the Atlanta Braves are one win away from their first World Series appearance since 1999. All they need to do is put away the defending champion Los Angeles Dodgers. Easier said than done. After all, the Braves were in exactly the same position last year and failed to […]
MLB・2 DAYS AGO
WSAV News 3

LOS ANGELES (AP) — For a guy who dislikes drama, Chris Taylor sure provided plenty of it. Taylor hit three homers and drove in six runs, joining the likes of Reggie Jackson and Babe Ruth in October baseball lore, as the Los Angeles Dodgers broke loose at the plate to beat Atlanta 11-2 on Thursday, cutting […]
MLB・20 HOURS AGO

Dodgers break out in 9-2 win over Giants, even series

Chris Taylor responded to his first start of the postseason with two hits and three runs scored Saturday night, igniting the Los Angeles Dodgers to a 9-2 romp over the host San Francisco Giants in Game 2 of their National League Division Series. Aided by left-hander Julio Urias’ five strong...
MLB・13 DAYS AGO
thesantaclara.org

Giants Finish with Most Wins in MLB, Earn Postseason Date with Dodgers

The San Francisco Giants have run the gauntlet in the National League (NL) West and finally earned their league’s number one seed and home-field advantage throughout the playoffs. After stumbling against the Padres in their penultimate regular season game, game 162 of the regular season became critical. In order to...
MLB・14 DAYS AGO
Marietta Daily Journal

The Los Angeles Dodgers haven't figured out a way to stop the Atlanta Braves in the bottom of the ninth inning through two games of the National League Championship Series. So the defending champs will do the next best thing -- take last licks themselves over the next two or three games.
MLB・5 DAYS AGO
Sportsnaut

LOS ANGELES — Needing a win Tuesday to prolong the NLDS and their season, the Dodgers started Walker Buehler on short rest for the first time in his major-league career. Hours before Buehler took the mound, reliever Blake Treinen assessed the decision. “We’ve got a lot of options,” Treinen said,...
MLB・10 DAYS AGO
giants365.com

Dodgers pitching dominant in NLDS win over the Giants

The winning rally started with Doval hitting Justin Turner with a pitch with one out. Gavin Lux, making his second straight start in centerfield, singled to right to put two on for Bellinger, who had two hits in 48 at-bats against the Giants during the regular season. Bellinger in the NLDS had four hits in 15 at-bats, driving in key runs in road wins in Game 2 and Game 5.
MLB・7 DAYS AGO
Sportsnaut

The 2021 MLB regular season was an unexpected joyous ride for the San Francisco Giants, as they won a league-best
MLB・2 DAYS AGO
San Francisco Chronicle

In the Dodgers’ dugout, Gavin Lux ducked out of view of the field before the bottom of the ninth inning. He re-emerged to a surprising sight: Max Scherzer entering from the bullpen beyond center field. “I was like, ‘Oh, my God, Scherz is coming in,’” Lux said. “It fired me...
MLB・7 DAYS AGO

Wow. I still am trying to calm myself down after that game. What a night. In one of the more thrilling games in recent postseason memory, the Dodgers took down the Giants in Game 5 of the NLDS. After battling with each other all season, it came down to one game. Very fitting, wasn’t it?
MLB・7 DAYS AGO
FanSided

In what is destined to be a wild series between the Atlanta Braves and the Los Angeles Dodgers, we had plenty of drama in Game 1 of the NLCS. As Ron Darling said a million time during the TBS broadcast, this was pretty much a must-win game for the Atlanta Braves with their ace going against the Dodgers bullpen.
MLB・6 DAYS AGO
chatsports.com

With Walk-Off Win, Atlanta Snags an Early Edge Over Dodgers

ATLANTA — The Los Angeles Dodgers reached the National League Championship Series with a final, bitterly contested pitch on Thursday night in San Francisco. Its last-pitch luck — or sorcery or absurdity or whatever your baseball loyalties lead you to call it — did not last. Instead, with Game 1...
MLB・5 DAYS AGO