A gangster standing trial for murder was shot dead in a courtroom by 2 rivals disguised as lawyers, say police 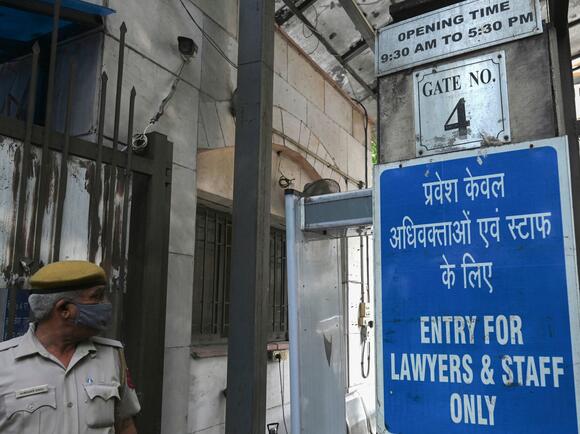 An Indian gangster was shot dead in a New Delhi courtroom by two rival gang members dressed as lawyers, according to CNN.

The gunmen, wearing their disguises, opened fire while Jitender Gogi, 30, was standing trial for murder, the media outlet reported.

"Two gangsters killed in immediate counterfire by Police as they opened fire in lawyers attire at a gangster UTP (under trial prisoner) in Rohini court premises this afternoon," said a tweet by Delhi Police. "All three gangsters dead. No other injury or death occurred."

Police added that an inquiry is underway.

According to News 18, Gogi was jailed last year for his alleged involvement in 19 murder and attempted murder cases.

The Hindustan Times reported that, for years, Gogi had run a sophisticated organized crime syndicate. The paper said that he continued to commit crimes from jail, having reportedly used secret cellphones to extort people of money from inside his high-security prison cell.

One of Gogi's suspected killers, Sunil Maan, was a childhood friend before the two became deadly rivals, The Hindustan Times said. The two had fought a bloody turf war for more than a decade, the paper said.

when i 1st read it...i read Indiana...lol as i was reading and waking up with coffee..i said wait this cant happen with detectors and court security..WENT BACK...INDIA...not surprised, makes for great TV..put it on the screen!! have a good day everyone and its hot mess here in America BUT I LOVE EVERY DAY HERE IN OUR COVID FILLED TRAIN WRECK OF A COUNTRY!!

A Colorado police department faces an internal investigation after they let an armed kidnapping gang keep an innocent man they abducted from his home to extort the victim's family. On November 4 Brandon Sharp, 34, William Holland, 40, and three other men stormed 25-year old Jose Salguero-Martinez' apartment in Aurora...
PUBLIC SAFETY・2 DAYS AGO
Daily Voice

Multiple news outlets are reporting that two former police officers and two kidnapped girls were shot died in a car that crashed near the Pennsylvania and Maryland border.Robert Vicosa and Tia Bynum have been on the run with Vicosa’s daughters, Aaminah, 6, and Giana, 7, after purportedly abducting …
PUBLIC SAFETY・10 DAYS AGO
CNN

Friend who bought gun for Kyle Rittenhouse says the teen was 'freaking out,' pale and sweaty after Kenosha shootings

(CNN) — Kyle Rittenhouse's friend testified Tuesday that the armed teenager was "freaking out," pale and sweaty after he fatally shot two people and wounded another during the unrest in Kenosha, Wisconsin, last summer. "He said he had to do it, it was self-defense, people were trying to hurt him,"...
KENOSHA, WI・27 DAYS AGO
Black Enterprise

A former police officer in , Maryland, who kidnapped his two daughters earlier this week has been found dead with gunshot wounds in a car that had been crashed. , following a manhunt that focused on finding the former Baltimore County police officer Robert Vicosa, 41, his 6-year-old daughter Aaminah and 7-year-old daughter Gianna, along with suspended Baltimore County police Sgt. Tia Bynum, they were found dead of gunshot wounds in apparent murder suicide, Maryland State Police said Thursday.
PUBLIC SAFETY・8 DAYS AGO

A man who was on the run since 2012 turned himself in after true crime episode featuring his case aired on TV: report

A man who was on the run turned himself to authorities in Mexico on November 20, Law&Crime reported. Hector Hugo Ramirez-Lopez was accused of stabbing a man in 2012, police said. His surrender comes after an episode of a true-crime show that highlighted his case aired last month. A 33-year-old...
AUSTIN, TX・20 HOURS AGO
KRMG

TULSA, Okla. — Tulsa police say a husband and wife were found dead in their home at the Benchmark Condos around 5:30 p.m. Tuesday evening. Captain Jarrod Hart tells us a concerned cousin went to check on the couple at their home near East 91st Street and South Yale Avenue, which is when the bodies were discovered.
TULSA, OK・5 DAYS AGO
Miami Herald

Driver shot dead after fight with gunman, Georgia police say. A child was in the car

A child is safe after being found inside the car of a man shot and killed this week in Atlanta, according to authorities. Police said the deadly shooting occurred around 6:30 p.m. Monday, Nov. 22, in the city’s posh Buckhead community, according to a news release. Homicide investigators arrived at the scene to find a 25-year-old male suffering from a gunshot wound.
PUBLIC SAFETY・5 DAYS AGO
arcamax.com

LZ Granderson: Who else has been terrorized and killed by police where Ahmaud Arbery was murdered?

Caroline Small was just 35 years old when she died. Already struggling with mental health issues as well as drug and alcohol addiction, it is believed her divorce, which had just been finalized days earlier, contributed to her poor state of mind when a Glynn County officer approached her as she sat in her running car. Someone had called police believing Small was doing drugs.
GLYNN COUNTY, GA・10 HOURS AGO

A woman was fatally shot by her cousin in New Hampshire on Saturday, officials said, announcing the arrest of the suspected gunman. Lance Goodrich, a 35-year-old from Lyme, New Hampshire, was arrested Saturday afternoon, hours after the shooting in Orford left Brooke Goodrich, 25, dead, according to the offices of Attorney General John Formella and State Police Col. Nathan Noyes.
PUBLIC SAFETY・8 DAYS AGO
kawc.org

Travis McMichael took the witness stand Wednesday in his murder trial over the February 2020 killing of Ahmaud Arbery, as the defense launched its phase of the trial. The prosecution rested its case on Tuesday. "I want to give my side of the story," McMichael said, telling the court that...
PUBLIC SAFETY・11 DAYS AGO
NBC News

A Reno lawyer breaks down the Rittenhouse murder trial

RENO, Nev. (KOLO) -The jury has yet to render a verdict in the Kyle Rittenhouse case. That may not be so unusual considering they heard from more than 30 witnesses over six days. Reno criminal defense attorney Martin Wiener says in his experience there is probably disagreement on guilt going...
RENO, NV・10 DAYS AGO
foxwilmington.com

Tensions Flare in Ahmaud Arbery Murder Trial Over Presence of the Rev. Jesse Jackson in Courtroom

Tensions boiled over Monday in the Ahmaud Arbery murder trial as the judge refused mistrial requests from the defense attorneys of three white men accused of killing the Black jogger. The lawyers alleged jurors were tainted by seeing Arbery’s parents sitting with the Rev. Jesse Jackson. “There is no reason...
PUBLIC SAFETY・13 DAYS AGO
westernmassnews.com

Defense attorney in the Ahmaud Arbery murder trial sought a plea deal for one defendant and was declined, Arbery's mother's lawyer says

A defense attorney for one of the three White men accused of chasing and killing Black jogger Ahmaud Arbery asked prosecutors for a plea deal and was declined, an attorney for Arbery's mother told CNN. William "Roddie" Bryan Jr.'s lawyer "asked for a plea deal before resting their case. Prosecutors...
PUBLIC SAFETY・10 DAYS AGO
KLFY News 10

Editor’s note:  The following contains graphic language and descriptions of a crime. Before his trial was supposed to start, Jonathon Aubrey told the judge he would not sit with his defense attorneys and he wanted to represent himself.  The first-degree murder trial was scheduled to get started Wednesday morning after a day and a half […]
LAFAYETTE, LA・11 DAYS AGO
heraldsun.com

A Roxboro police officer won’t face any charges after fatally shooting a defendant in a Person County courtroom following an altercation between the defendant and a bailiff in September, a prosecutor said Friday. Christopher Thomas Vaughan, 35, became agitated upon receiving a guilty verdict Sept. 10 and began arguing with...
ROXBORO, NC・9 DAYS AGO
Fort Worth Star-Telegram

SPRINGFIELD — The defense attorney for a man accused of shooting multiple people at a Springfield Speedway gas station earlier this year has requested his trial be moved out of Clark County. >>PREVIOUS COVERAGE: Springfield murder suspect’s lawyer asking for second opinion on competency to stand trial. Emil Witherspoon, 44,...
13 DAYS AGO
BBC

A mask-wearing gunman disguised himself as a litter picker for surveillance before shooting dead a reality star's brother, a court has heard. Flamur Beqiri, 36, whose sister Misse Beqiri appeared in Real Housewives Of Cheshire, was repeatedly shot in the back of the head on Christmas Eve 2019. Four men...
PUBLIC SAFETY・4 DAYS AGO
WSB Channel 2 Atlanta

COBB COUNTY, Ga. — Police are investigating a double homicide after two people were found dead inside a Cobb County home. The home is located along Verbena Drive in the Acworth area. Investigators said the bodies were found around 9:30 a.m. Thursday. Police identified the victims as Timothy Justin Hicks,...
COBB COUNTY, GA・10 DAYS AGO