By Julia Cherner and
ABC News
27 days ago 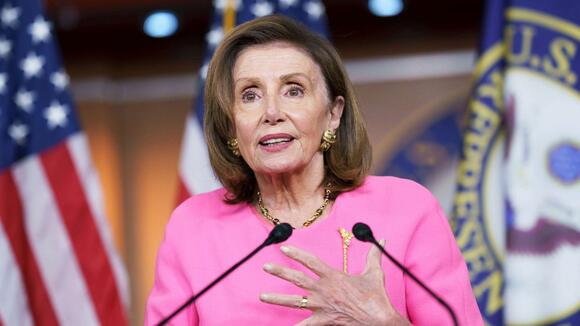 House Speaker Nancy Pelosi, D-Calif., may not bring the bipartisan infrastructure bill to the House floor Monday as she had previously committed to, she said Sunday.

"I'm never bringing to the floor a bill that doesn't have the votes," Pelosi told ABC "This Week" anchor George Stephanopoulos, adding it could be Monday.

"You cannot choose the date," Pelosi said. "You have to go when you have the votes in a reasonable time, and we will."

Pelosi had previously agreed to put the bipartisan infrastructure bill on the floor to be considered by Sept. 27, after moderates in her caucus demanded a vote.

Still, she said of the $1 trillion bipartisan infrastructure bill, "Let me just say, we're going to pass the bill this week."

House progressives have warned leadership they will not vote on the bipartisan bill until the larger $3.5 trillion human infrastructure bill is also ready for a vote. Pelosi acknowledged, "In order to move forward, we have to build consensus."

Pelosi said the price tag for that larger bill could drop in negotiations with concessions.

"I know the budget committee passed a resolution calling for $3.5 trillion, but it sounds like you acknowledge that the final number is going to be somewhat smaller than that," Stephanopoulos pressed.

Moderate Democrats, including Sens. Kyrsten Sinema, D-Ariz., and Joe Manchin, D-W.V., have expressed concern over the $3.5 trillion bill's cost and some of its contents. Due to the Democrats' narrow Senate majority, they need every member of their caucus to vote for the bill in the Senate in order for it to pass the simple majority required for reconciliation measures.

"We'll see how the number comes down and what we need in that regard, but we have agreed on an array of pay-fors in the legislation," Pelosi said. "This will be paid for."

"Obviously with negotiations there will have to be some changes with that, the sooner the better so that we can build our consensus to go forward, and we will do that," she also said.

On Saturday, the House Budget Committee approved a $3.5 trillion budget resolution that calls for investments in climate change policy, childcare and other social programs.

Pelosi told her colleagues in a letter on Saturday they "must" pass the bill this week along with a separate bipartisan infrastructure bill.

"The next few days will be a time of intensity," she wrote.

Pelosi said on "This Week" that the House must first deal with the looming potential government shutdown on Oct. 1. The House previously approved a bill that would fund the government until Dec. 3, and it would also suspend the debt limit through December 2022.

Senate Republicans are expected to block a procedural vote on Monday because they have said for months now that they want Democrats to handle the debt limit on their own.

Stephanopoulos pressed Pelosi on whether her caucus will pass the funding bill.

"Are you confident right now Democrats can pass it on their own?" Stephanopoulos asked.

She added about Republicans, "Isn't that irresponsible beyond words? The full faith and credit in the United States should not be questioned. That's in the Constitution of the United States."

Pelosi insisted she wants to raise the debt limit in a bipartisan manner and ruled out lifting the debt limit by using the process of reconciliation, which would only require a simple majority of votes but requires weeks of procedural time.

"This is beyond a big deal," Pelosi said. "So let's hope some of the Republicans -- enough of them -- find some level of responsibility to our country to honor what's in the Constitution, that we not question the full faith and credit of the United States of America."

"They know full well what the consequences are," Pelosi said.

Sen. Joe Manchin, D-W.Va., is reportedly pushing back on parts of President Biden’s infrastructure bill that would tackle climate change as well as the child tax credit. NBC News’ Cal Perry is in Charleston, West Virginia, to explain how the senator’s constituents are reacting as the infrastructure bill remains in limbo. Oct. 22, 2021.
CHARLESTON, WV・1 DAY AGO
POLITICO

One of Republicans' most prized Senate recruits, Chris Sununu, says he'll make up his mind on whether to run in the next few weeks.

His entrance would immediately make the New Hampshire race a tossup. Timing thoughts: Calling in to WMUR, New Hampshire Gov. Chris Sununu said he's nearing a decision on whether to challenge Sen. Maggie Hassan (D-N.H.) in the 2022 Senate race. “I got a job to do — I’ve been focusing...
U.S. POLITICS・1 DAY AGO
The Guardian

Rep. Jim Banks (R-IN) was one of the two Republicans that Speaker Nancy Pelosi (D-CA) booted from the Jan. 6 Committee in July, but Donald Trump’s staunch ally appears to be using his brief association with the panel to run a shadow investigation of his own. According to two sources...
CONGRESS & COURTS・1 DAY AGO
POLITICO

The party is close to selling Sens. Joe Manchin and Kyrsten Sinema, its chief centrist holdouts, on the specifics of the spending bill.
POTUS・19 HOURS AGO
POLITICO

Senate Democrats are pressing Joe Manchin to give them an alternative after he rejected major parts of President Joe Biden’s climate plan.
ENVIRONMENT・19 HOURS AGO
The Independent

Democratic Arizona Sen. Kyrsten Sinema faced more defections Thursday from the broad base of support she built to win her seat in 2018 when five members of her veterans advisory council resigned over her opposition to parts of President Joe Biden s infrastructure plan and refusal to ditch the Senate filibuster.The resignations come as progressive groups are ratcheting up their pressure on the first-term moderate, who along with West Virginia Sen. Joe Manchin is seen as holding back progress as Biden sharply scales back his once-$3.5 trillion plan to win their support.Democrats need their support to push the legislation...
CONGRESS & COURTS・1 DAY AGO

UPDATE: Mitch McConnell and Senate Republicans on Wednesday blocked the Freedom to Vote Act from advancing, as expected. The vote fell along party lines, with all 50 Republicans upholding a filibuster to stop the measure, which is aimed at safeguarding the right to vote. Original story below. *** WASHINGTON — It’s not often the leader of the United States Senate holds a vote knowing it will fail. It’s even less often that the Senate leader calls a doomed vote for one of the most important bills in his party’s legislative agenda. Majority Leader Chuck Schumer (D-N.Y.) is about to do just that. The Senate will...
CONGRESS & COURTS・2 DAYS AGO
The Guardian

Bills are ‘about historic Black voter turnout’, say activists while House to vote to hold Bannon in contempt – follow all the latest
CONGRESS & COURTS・1 DAY AGO
WashingtonExaminer

Upon her return to Capitol Hill from a meeting at the White House on Friday, House Speaker Nancy Pelosi told reporters that a deal was within reach on congressional Democrats’ sweeping social spending package.
CONGRESS & COURTS・1 DAY AGO
Los Angeles Times

Vice President Kamala Harris, at an event for the anniversary of Martin Luther King's monument in Washington, vows to keep fighting for voting access.
LOS ANGELES, CA・1 DAY AGO

CEDAR RAPIDS — Election politics may do more to win approval of the trillion-dollar infrastructure package he voted for than congressional arm-twisting has — so far — accomplished, Sen. Chuck Grassley said. The Iowa Republican has heard Democrats may bring it up for a vote before the end of the...
CONGRESS & COURTS・1 DAY AGO
CBS News

Democrats are scrounging for new ways to pay for Biden's economic agenda, as the Arizona senator moves against tax increases on the wealthy.
PRESIDENTIAL ELECTION・2 DAYS AGO

Democrats may end up nixing a plan to hike taxes in order to pay for a massive social welfare spending package.
CONGRESS & COURTS・2 DAYS AGO
Minneapolis Star Tribune

WASHINGTON – U.S. Sen. Amy Klobuchar's voting rights bill was blocked Wednesday by Senate Republicans, displaying the stark partisan divide on elections legislation that Democrats remain unable to overcome. The push from Klobuchar and other Democrats to set federal standards on voting and elections is playing out as some Republican-led...
PRESIDENTIAL ELECTION・2 DAYS AGO
Business Insider

All GOP Senators moved to block debate on a major voting rights bill that Democrats framed as the last chance to save American democracy.
CONGRESS & COURTS・2 DAYS AGO