Players Of The Game From The Notre Dame Victory Over Wisconsin

By Bryan Driskell
IrishBreakdown
20 days ago 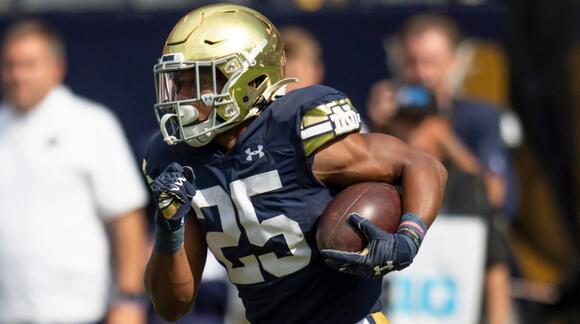 Notre Dame entered its matchup against Wisconsin as the perceived underdog, but by the time the final seconds expired it was clear the Fighting Irish were the superior team. Notre Dame finished with a flurry en route to a 41-13 victory over the Badgers.

There were a number of standouts for the Irish, but there were three players that stood above the rest. Here are the Irish Breakdown players of the game.

Austin's performance goes beyond its impact in the win over Wisconsin, but the player of the game emphasis will focus on that. Austin gave Notre Dame its first lead of the game with a 36-yard touchdown grab on a contested throw. His second score put some distance between the Irish and Badgers.

Two of Austin's catches obviously went for touchdowns, but three of his four remaining catches converted a third-down. That means five of his six catches either went for a touchdown or converted a third down. His final third down grab was a great catch of a low throw, and that chain moving play set up Austin's final grab, which was a 16-yard touchdown in which he worked free against the zone, made the catch and then worked his way into the end zone.

Austin also handled himself well in the run game.

There were several players that had outstanding performances, but when thinking about who stood above the rest its hard not to go with Hart. The junior cornerback picked off two passes in the game and both were game changers.

Hart's first interception set up the first Austin touchdown reception that gave Notre Dame the lead. His second interception, which he returned 32 yards into Wisconsin territory, set up a field goal that made it a two touchdown game.

Hart made great plays on both interceptions. He made a great read of in-breaking routes both times, exploded downhill and took a great angle to the football, which allowed him to beat the receiver to the football both times.

Arguably no play in this game had a bigger impact than Tyree's 96-yard kick return for a score, the first of his career. Notre Dame's starting quarterback had been knocked out of the game, and the Badgers had just taken a 13-10 lead after forcing a Pyne fumble.

Tyree fielded the kick in the right corner, exploded through a hole on the left side of the line and then outran the Wisconsin defense. He made a great open field move that made the kicker miss and then allowed him to explode through a crease for the score.

Every ounce of momentum that Wisconsin had built up in the third quarter was gone with that score from Tyree.

Notre Dame Defense Must Make Adjustments Against Second Half Schedule

Notre Dame has done some very good things on defense during the 2021 season, and there have also been a few too many bouts of inconsistency. The numbers are always sexy, but when this unit is playing good on all three levels it has been very, very good. With the...
NOTRE DAME, IN・10 HOURS AGO
IrishBreakdown

Notre Dame doesn't play this weekend but that doesn't mean we don't have plenty of Fighting Irish topics to discuss. In our latest Irish Breakdown football mailbag we answered subscriber and listener questions about the Notre Dame football program. It's a show that is directed by the fans, who choose...
NOTRE DAME, IN・20 HOURS AGO
IrishBreakdown

Five Keys To Turning Around The Notre Dame Offense

Notre Dame has not lived up to expectations through the first half of the season, but the Irish are still sitting at 5-1 and ranked 14th in the nation. The second half schedule is quite manageable, with the final six opponents entering this weekend with a 17-19 combined record. Notre...
NOTRE DAME, IN・15 HOURS AGO
IrishBreakdown

Mike Brey And Notre Dame Are Ready To Turn The Corner ... Again

This is a perfect kind of moment for Notre Dame basketball coach Mike Brey. Nobody comes back from the dead like Brey. The Irish have had losing records in two of their last three years and they haven’t been to the NCAA Tournament since the 2016-2017 season. That’s a recipe...
NOTRE DAME, IN・1 DAY AGO

Take 5: Five Biggest Concerns For Notre Dame In The Season's Second Half

Five things I’m unsure about going into the second half of the season. 1. Whether Brian Kelly will be able to solve the quarterback issues that Notre Dame has had. I believe much of these problems were self-inflicted. Jack Coan has been great at times but his performance overall isn’t consistent enough for him to be the runaway starter. Kelly has done everything possible not to play backup Drew Pyne, going so far as to say he wasn’t impressive enough during practice the week before Cincinnati to win the starting job. This after Pyne was the quarterback that led them to scoring drives in a 24-13 loss to the Bearcats.
NOTRE DAME, IN・2 DAYS AGO
IrishBreakdown

Notre Dame won't be back in action until Oct. 23 when it returns home to face its biggest rival, the Southern Cal Trojans. It begins a stretch of games that will determine just how this season will turn out. The Irish schedule sets up very, very nicely for a great...
NOTRE DAME, IN・2 DAYS AGO
IrishBreakdown

Notre Dame Second Half Schedule Is Quite Manageable

Can Notre Dame finish the season 11-1? Yep, it’s definitely possible with the remaining schedule. I have to admit, though, this doesn’t feel like a 5-1 team, and yet it could easily be 6-0 if it weren’t for three turnovers against Cincinnati. And if the Irish coaching staff had a...
NOTRE DAME, IN・3 DAYS AGO
IrishBreakdown

There are some huge upcoming games in the Big 12, which has been a very competitive league thus far. Last week's Oklahoma vs. Texas game was one of the most exciting of the season, and now the Longhorns must take on another undefeated team, the Cowboys of Oklahoma State. Oklahoma...
OKLAHOMA STATE・1 DAY AGO

My five biggest takeaways from the open Notre Dame basketball scrimmage. 1. There’s a good “vibe” as Notre Dame basketball coach Mike Brey would say, around the program going into the 2021-2022 season. The energy level around Purcell Pavilion was amplified on Tuesday when JJ Starling, a consensus top 40 recruit from La Lumiere College Prep in LaPorte, committed to play for the Irish after a torturous Instagram press conference. The sound went out on Starling’s feed, and it took several attempts for it to get reconnected. It’s emblematic of recruiting for Brey.
NOTRE DAME, IN・2 DAYS AGO
IrishBreakdown

Turns out the biggest game of the season in the SEC East isn't going to be Florida vs. Georgia. The emergence of the Kentucky Wildcats, 20-13 winners over the Gators two weeks ago, has given the No. 1 ranked Georgia Bulldogs another ascending program to vanquish. Georgia has sustained a...
GEORGIA STATE・1 DAY AGO
IrishBreakdown

Notre Dame is now halfway through the 2021 season, and the Irish have a bye week to split up the season. That makes this the ideal time to take a dive into the team and offer up a midterm report. We'll begin that analysis with the Notre Dame offense, which came into the season with high expectations but has mostly struggled through six games.
NOTRE DAME, IN・3 DAYS AGO
IrishBreakdown

Notre Dame landed a huge commitment for its 2022 class when La Porte (Ind.) La Lumiere School guard JJ Starling gave them a verbal commitment. Starling is originally from Baldwinsville, New York and is a consensus top 40 player. He chose the Irish over Duke, Syracuse, Stanford, Northwestern and Maryland.
NOTRE DAME, IN・3 DAYS AGO

Barring an absolute collapse by Georgia this game likely isn't about SEC East titles or postseason positioning, this is about both Florida and LSU facing must-win situations. For Florida, a loss drops them to 4-3 with the Bulldogs still looming. It would make it very, very difficult for the Gators to avoid a second straight four-loss season, which would likely start to heat up the seat for head coach Dan Mullen. A win, of course, gives Florida a 5-2 record and sets up an opportunity for the Gators to make some real noise this season when it plays Georgia (Oct. 30).
FLORIDA STATE・1 DAY AGO
IrishBreakdown

Tyler Buchner Showed He Is Notre Dame's Future, But Is He The Present?

From the moment he committed to Notre Dame as a sophomore in high school, talented quarterback Tyler Buchner has generated a great deal of excitement among Irish faithful. After he passed for 4,474 yards, rushed for 1,610 yards and racking up 81 touchdowns as a junior during the 2019 season that excitement reached a fever pitch.
NOTRE DAME, IN・4 DAYS AGO
IrishBreakdown

Take 5: Five Things I Am Most Confident With For The Second Half of the Season

What I’m most confident about going into the second half of the season for Notre Dame. 1. That Kyle Hamilton will intercept at least one more pass and make a big play that essentially leads to a Notre Dame victory. Hamilton, a 6-4, 220-pound safety, is a generational player for the Irish. ESPN’s Mel Kiper Jr. has Hamilton slated to get picked second in the 2022 NFL Draft.
NOTRE DAME, IN・4 DAYS AGO
IrishBreakdown

The Notre Dame men’s basketball team had an open scrimmage on Wednesday an I was inside Purcell Pavilion to watch. Here is some practice observations. Assistant coach Anthony Solomon was definitely in charge of the practice. Solomon, the associate head coach, returned to Notre Dame after spending the last four seasons as an assistant at Dayton. Solomon was instrumental in helping the Irish reach back-to-back Elite Eights in 2015 and 2016.
NOTRE DAME, IN・3 DAYS AGO

Notre Dame basketball has picked up a huge commitment, landing La Porte (Ind.) La Lumiere School star guard JJ Starling. The 2022 standout is a native of New York but transferred to the elite Indiana school, and he'll remain in the Hoosier state to play for the Irish. A 6-3...
NOTRE DAME, IN・4 DAYS AGO
IrishBreakdown

Record: 3-3 Schedule Prior To ND: Oct. 16 - Bye. Offense: PPG: 32.2 (ranked 46th nationally) Defense: PPG: 27.3 (ranked 80th nationally) The Trojans struggled for years under the weight of some bad coaching by Clay Helton. USC took care of their Helton problem for the long term when he was fired after a 42-28 loss to Stanford on Sept. 11. The problem is that interim coach Donte Williams inherited a mess. The Trojans lost 42-26 to a mediocre Utah team on Oct. 9. USC has been favored in all six of its games. That means their schedule is weak. Nevertheless, the Trojans have a bye week and they have some talented players like quarterback Kedon Slovis and Drake Jackson, a 6 foot 4, 250-pound edge rusher. Both will likely get drafted.
NOTRE DAME, IN・4 DAYS AGO
IrishBreakdown

The one nice thing about the 2020 season was there was no quarterback controversy, and I must admit, I rather enjoyed that. Whatever your opinion is or was of Ian Book, there was no debate that he was the man for the 2020 Irish football team. There were quarterback debates...
NOTRE DAME, IN・5 DAYS AGO
IrishBreakdown

The 2021 season certainly hasn't gone as expected for Notre Dame, or perhaps as hoped for, but despite the team's struggles the Irish are still 5-1, ranked 14th in the nation and still have a lot of great things to play for. I'm not talking about playing for 2022 or...
NOTRE DAME, IN・5 DAYS AGO