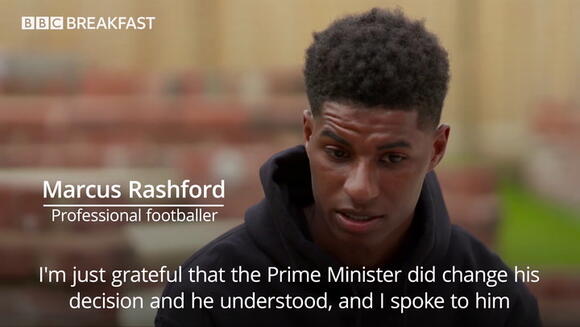 After England footballer Marcus Rashford secured a U-turn from the prime minister on free school meals last year, speculation is rising that another reversal from No 10 may be coming after the sportstar turned his attention to Universal Credit .

The Mirror reports that Rashford has called on Johnson to reverse his decision to scrap the £20 increase in Universal Credit payments next month – a rise which was introduced in response to the coronavirus pandemic.

“Instead of removing vital support, we should be focusing on developing a long-term roadmap out of this child hunger pandemic.

“On October 6, millions lose a lifeline. It’s a move that Child Poverty Action Group says will raise child poverty to one in three,” Rashford said.

It comes after Rashford launched a national campaign with The Food Foundation to end child food poverty earlier this month, in which he called on members of the public to write to their MPs on the issue.

The charity released new data which found that 15 per cent of households with children experienced food insecurity within the past six months, with the situation “set to worsen” as a result of the planned cut to Universal Credit.

However, given Rashford’s previous success with government U-turns, some are hoping that the star could once again force the Conservatives to reconsider their policies:

We, for one, welcome Rashford as the new leader of the opposition.

Marcus Rashford underlined the importance of going “back to basics” after Manchester United players discussed the embarrassing loss at Leicester. Ole Gunnar Solskjaer’s side looked set to escape from the King Power Stadium with a fortuitous point after the forward came off the bench to score on his first appearance since summer shoulder surgery.
PREMIER LEAGUE・21 HOURS AGO
The Independent

‘Are the new paving stones it?’: Red wall waits for levelling up it fears will never come

It is the government’s flagship agenda, an oft-repeated promise to revive and regenerate communities that have long felt left behind.In Scunthorpe, however, levelling up currently appears to mean, er, paving stones.The Lincolnshire town of 83,000 people is exactly the kind of place ministers tend to have in mind when they talk of the need for rejuvenation: decimated by deindustrialisation in the Eighties, smashed by austerity over the last decade and, most recently, hammered by Covid-19.Yet, almost two years after Boris Johnson first vowed to level up the country, the only sign of action here in Scunthorpe is £1m being lavished...
POLITICS・1 DAY AGO
The Independent

Michael Caine has clarified his political views on Boris Johnson in a brand new interview.The 88-year-old actor, who has often voted Conservative in the past, was in favour of Brexit – and still maintains his position despite recent issues surrounding the UK’s supply chain. “Oh, that’s teething trouble,” Caine told The Guardian. “It’s obviously not going to go well immediately. I mean, I don’t know what’s going to happen. I’ve got to wait for Boris to come back off holiday. I mean, to do that, to go on holiday right now, it’s unbelievable. Empty shelves. People queueing for petrol....
CELEBRITIES・2 DAYS AGO
WLFI.com

Manchester United forward Marcus Rashford has been advised by his manager Ole Gunnar Solskjaer to "focus on football" rather than off-field commitments as he gets set to return from injury. Last year, in the midst of the coronavirus pandemic, Rashford led a campaign to end child food poverty and successfully...
PREMIER LEAGUE・3 DAYS AGO

Ole Gunnar Solskjaer is convinced Manchester United have not yet seen the best of Marcus Rashford. The 24-year-old forward could make his first appearance of the season in Saturday’s Premier League game at Leicester after recovering from shoulder surgery. Rashford, who went under the knife in August following England’s penalty...
PREMIER LEAGUE・4 DAYS AGO
Yardbarker

Marcus Rashford is closing in on a comeback to first-team football, having trained with the team since the start of the international break. The 23-year-old has missed all of United’s games so far after having surgery on his shoulder ahead of the campaign. Rashford struggled with the injury for the...
SOCCER・5 DAYS AGO
The Guardian

Jacky Wright, the businesswoman named as the UK’s most influential black person, has called for “monumental shifts” to ensure Britain is a more equal place to live. Wright, the London-born corporate vice-president and chief digital officer at Microsoft US, was given this year’s top spot on 14 October by the Powerlist 2022, the annual list of the UK’s most powerful people of African, African-Caribbean and African American heritage.
CELEBRITIES・5 DAYS AGO
The Independent

A close-up of the Marcus Rashford mural in Manchester will be available to view in Google Street View in a celebration of the football player for Black History Month.The original mural was funded by Withington Walls, a community street art project in Withington, South Manchester, and was painted by street artist Akse P19 in recognition of the footballer’s work to tackle child poverty.It was vandalised after Rashford missed a penalty in England’s defeat to Italy in the Euro 2020 tournament.In the days following, it was decorated with messages of love and support for the 23-year-old footballer which are now available to...
PREMIER LEAGUE・7 DAYS AGO

Marcus Rashford has revealed he played through pain for the entirety of last season as the Manchester United and England forward prepares to make his comeback following shoulder surgery. The 23-year-old said he had managed his shoulder injury from September last year and didn’t undergo surgery until after the European Championship this summer. Including the Euros, Rashford played 65 matches for club and country last season and put off the surgery to avoid a lengthy lay-off. Rashford said the pain from his shoulder got worse over the campaign and he has been sidelined since undergoing the procedure in August....
SOCCER・8 DAYS AGO
BBC

Raheem Sterling and Marcus Rashford have changed how black footballers are viewed, says Ian Wright. England forwards Rashford and Sterling received MBEs for services to children and equality respectively. Wright praised them but added that they can't fight the racism battle alone. "It's people like Marcus Rashford, he changed the...
SOCIETY・9 DAYS AGO
The Independent

At 23, Marcus Rashford is the youngest recipient of an honorary doctorate. When I was 23, I was working at Pret A Manger and spending all my wages on beer the very day I got them. Like Marcus, I was an activist – but rather than launch a successful national campaign to end child poverty, I marched around a lot with slogans attached to bits of wood, and drunkenly called people who had different sensibilities to me “evil fascists” at parties (like many people of my generation, I had based a lot of my personality, with little self-awareness, on Rik...
SPORTS・11 DAYS AGO
BBC

Marcus Rashford: Families should not have to make choices

Marcus Rashford has spoken to BBC Breakfast about his fears surrounding child poverty as the £20 Universal Credit top-up ends. The Manchester United player said the situation many now found themselves in "reminds me of... when I was younger". "You've got to decide between are you going to eat or...
SPORTS・12 DAYS AGO

Manchester United forward Marcus Rashford said it felt “bittersweet” collecting his honorary degree for tackling child poverty the day after the Universal Credit uplift was retracted.The England international used his speech at the University of Manchester ceremony at Old Trafford to highlight how the Government’s cut meant “millions of families across the UK lost a lifeline”.At 23 years old, Rashford became the youngest recipient of an honorary doctorate from the university, rewarding his campaign against child poverty.Former United manager Sir Alex Ferguson who also has an honorary degree from the university, joined Rashford’s friends and family to see him...
SPORTS・12 DAYS AGO
BBC

Manchester United star Marcus Rashford said receiving an honorary doctorate for his work to tackle child poverty was "bittersweet" as it came as the £20 top-up to universal credit ended. Accepting the award from the University of Manchester, he said removing the temporary increase "could see child poverty rise to...
SOCIETY・12 DAYS AGO
The Independent

Manchester United forward Marcus Rashford describes collecting his honour degree as “bittersweet” after being awarded it for tackling child poverty the day after the Universal Credit uplift was retracted. Accepting the degree during a University of Manchester ceremony at Old Trafford, the England international said: “The cost of living has...
SPORTS・12 DAYS AGO
punditarena.com

Social media bosses will escape prosecution for failing to stamp out online hate because of a dangerous loophole in proposed laws, Keir Starmer has told Boris Johnson.At prime minister’s questions, the Labour leader attacked the weakness in the Online Safety Bill – itself delayed for three years – saying it allowed one site to “cheerlead for terrorists”.Mr Johnson appeared to concede the loophole should be closed and agreed to finally bring forward the legislation before Christmas, in the wake of the killing of David Amess.Amid widespread criticism that the government has dragged its heels, Sir Keir urged the prime minister...
U.K.・55 MINUTES AGO
BBC

Starmer: 'The government is turning on the poorest'

Labour leader Sir Keir Starmer has accused the government of "turning on the poorest in our society", as the £20 top-up to universal credit ends. "This is going to drive families and children into poverty", he told BBC Breakfast.
POLITICS・12 DAYS AGO
AFP

Prime Minister Boris Johnson on Tuesday urged foreign investors to buy into post-Brexit Britain as he seeks to power future prosperity on renewable energy and green technology. His government also outlined more detailed plans to reach net-zero carbon emissions by 2050, including a drive towards electric vehicles. The moves are part of a £90 billion ($125 billion, 107-billion-euro) plan that ministers say will support 440,000 jobs by 2030. Johnson is keen to burnish his green credentials before hosting world leaders at the UN's COP26 climate summit in Glasgow next month.
ECONOMY・19 HOURS AGO