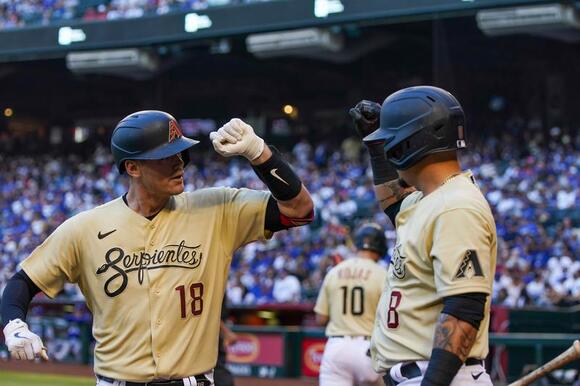 Zac Gallen got the better of a duel with Clayton Kershaw and the Arizona Diamondbacks earned a 7-2 victory Saturday against the playoff-bound Los Angeles Dodgers.

Gallen (3-10) gave up one run on just three hits over six innings, while Ketel Marte and Carson Kelly hit home runs as the Diamondbacks (50-105) won for just the third time in 18 games against the Dodgers this season. The teams will end their season series Sunday.

Trea Turner hit two home runs for the Dodgers (99-56), who lost for just the third time in their last 14 games. Los Angeles fell to 5-2 on their nine-game road trip.

Kershaw (10-8) gave up four runs (three earned) on six hits over 4 1/3 innings in his third start since returning from the injured list because of elbow inflammation. He threw 73 pitches after throwing 74 on Sunday at Cincinnati as he tries to build up his arm for the upcoming playoffs.

Kershaw’s three strikeouts gave him 2,669 for his career and moved him into sole possession of 26th on the all-time list.

Arizona took a 1-0 lead on Kershaw’s first pitch of the game when Marte went deep into the seats in left field for his 13th of the season. It was the first of three hits for Marte.

The Diamondbacks made it 2-0 in the second inning when Kelly hit Kershaw’s 1-0 pitch over the wall in left, also his 13th of the season.

Arizona increased the lead to 3-0 in the fourth inning when Christian Walker scored on a two-out throwing error from Dodgers third baseman Justin Turner. An RBI single from Daulton Varsho in the fifth inning gave the Diamondbacks a 4-0 advantage.

The Dodgers broke through against Gallen in the sixth inning on a home run from Turner. He hit another in the eighth, his 24th on the season, while also extending his hitting streak to 12 games. Mookie Betts’ hitting streak ended at 15 games after he went 0-for-3.

Arizona took a 5-1 lead in the seventh inning on a pinch-hit RBI single from Kole Calhoun and added two more runs on a single by David Peralta in the eighth.

After the Braves blew a 5-2 lead, thanks in part to decisions made by manager Brian Snitker, fans were calling for him to be fired in a fit of rage. The Atlanta Braves entered the bottom of the eighth inning with thoughts of a World Series appearance already dancing through their head. They had a 2-0 series lead and a 5-2 lead over the Dodgers in Dodger Stadium in Game 3. All they needed to do was close it out.
MLB・8 DAYS AGO
FanSided

The crowd at Dodger Stadium is receiving some criticism due to plenty of empty seats for the NLCS Game 3 featuring the Dodgers against the Atlanta Braves. As the Los Angeles Dodgers face off against the Atlanta Braves, it seems like some Dodgers fans missed the memo on the time for Game 3 of the NLCS. The Dodgers trail the Braves 2-0 in the series and a strong showing from the home crowd at Dodger Stadium would have likely been a welcomed sight for Los Angeles.
MLB・8 DAYS AGO
giants365.com

Dodgers pitching dominant in NLDS win over the Giants

The winning rally started with Doval hitting Justin Turner with a pitch with one out. Gavin Lux, making his second straight start in centerfield, singled to right to put two on for Bellinger, who had two hits in 48 at-bats against the Giants during the regular season. Bellinger in the NLDS had four hits in 15 at-bats, driving in key runs in road wins in Game 2 and Game 5.
MLB・13 DAYS AGO
ABC7

It was a 130-year rivalry that came to a head in a nail-biter of a game, as the Dodgers beat the Giants 2-1 Thursday night to advance to the NLCS.
MLB・13 DAYS AGO

In a series in which they are deemed to have few advantages, the Atlanta Braves demonstrated they might have an important one Saturday night -- baserunning. Moments after the Los Angeles Dodgers had the potential go-ahead run thrown out on the bases to end the top of the ninth inning, Braves speedster Ozzie Albies singled, stole second and scampered home on Austin Riley's walk-off single, giving the Braves a 3-2 win over the visiting Dodgers in Game 1 of the National League Championship Series.
MLB・11 DAYS AGO
FanSided

Former Los Angeles Dodgers top prospect Edwin Uceta made his MLB debut in 2021. In 2022, he’ll be with another team in the NL West. During the NLCS, Uceta was designated for assignment because the Dodgers were in need of a righty bat with defense after Justin Turner was lost for the remainder of the series due to a hamstring injury.
MLB・5 HOURS AGO
Chicago Tribune

The night before Game 3 of the 1999 World Series, Atlanta Braves pitcher Greg Maddux was talking with a group of Chicago reporters in a Manhattan hotel bar. When he got up to leave, Maddux turned to Chicago Tribune baseball writer Jerome Holtzman and said, “See you at work tomorrow.” It’s easy to forget baseball is a job, and the World Series is the end of a long and strenuous work year. For ...
MLB・2 DAYS AGO
Sportsnaut

In the Dodgers’ dugout, Gavin Lux ducked out of view of the field before the bottom of the ninth inning. He re-emerged to a surprising sight: Max Scherzer entering from the bullpen beyond center field. “I was like, ‘Oh, my God, Scherz is coming in,’” Lux said. “It fired me...
MLB・13 DAYS AGO
MassLive.com

After Cody Bellinger’s three-run home run dug the Dodgers out of the hole, Mookie Betts’ RBI double put them over the top as Los Angeles defeated the Braves, 6-5, Tuesday in Game 3 of the NLCS at Dodger Stadium. Staring a 3-0 series deficit in the face, the defending World...
MLB・8 DAYS AGO
FanSided

In what is destined to be a wild series between the Atlanta Braves and the Los Angeles Dodgers, we had plenty of drama in Game 1 of the NLCS. As Ron Darling said a million time during the TBS broadcast, this was pretty much a must-win game for the Atlanta Braves with their ace going against the Dodgers bullpen.
MLB・11 DAYS AGO
chatsports.com

With Walk-Off Win, Atlanta Snags an Early Edge Over Dodgers

ATLANTA — The Los Angeles Dodgers reached the National League Championship Series with a final, bitterly contested pitch on Thursday night in San Francisco. Its last-pitch luck — or sorcery or absurdity or whatever your baseball loyalties lead you to call it — did not last. Instead, with Game 1...
MLB・11 DAYS AGO

Braves advance to World Series with 4-2 win over Dodgers

EditorsNote: w-thru with quotes added; Corrects Matzek’s record to 2-0 in 6th graf. The Atlanta Braves’ 22-year World Series drought was put to rest Saturday, thanks largely to a player who has been with the organization for less than three months. The Braves continued to ride Eddie Rosario’s heroics, finishing...
MLB・4 DAYS AGO
baltimorenews.net

Cody Bellinger hit a game-tying, three-run home run and Mookie Betts delivered a go-ahead double as the Los Angeles Dodgers erupted for four runs in the eighth inning to earn a 6-5 comeback victory over the Atlanta Braves on Tuesday in Game 3 of the National League Series. Five outs...
MLB・8 DAYS AGO
wmleader.com

Albert Pujols has big night in Dodgers’ win over Braves

LOS ANGELES — Albert Pujols’ days of thunder are largely behind him, but he demonstrated Thursday he still can be trusted in a big game. With the Dodgers facing elimination from the postseason, the future Hall of Famer received the start at first base and went 2-for-4 with two singles and a walk in his team’s 11-2 victory over the Braves in Game 5 of the NLCS. Twice Pujols was on base when Chris Taylor homered.
MLB・6 DAYS AGO
WSB-TV Atlanta

The Houston Astros have reached their third World Series in five years after beating the Boston Red Sox 4-2 in the American League Championship Series. Having trailed 2-1 in the best-of-seven ALCS, the Astros bounced back by winning the next three games, and blanked the Red Sox 5-0 in Friday's game six at Minute Maid Park, Houston.
MLB・5 DAYS AGO
USA TODAY

'Mind-blowing what he just did': Tyler Matzek makes name for himself in leading Atlanta to World Series

Reliever Tyler Matzek saved Atlanta's season in shutting down Dodgers' rally. His story is one of redemption, his name once forgotten by his manager.
MLB・4 DAYS AGO
FanSided

The Atlanta Braves received a brutal injury update on starting pitcher Charlie Morton after he left Game 1 of the World Series. The Atlanta Braves got off to a tremendous start to Game 1 of the World Series, taking an early 5-0 lead over the Houston Astros. But, they received some awful news after starting pitcher Charlie Morton was removed from the game in the third inning with an apparent injury. As it turns out, the ailment is a serious one.
MLB・1 DAY AGO
papercitymag.com

CHICAGO — Jose Altuve does not need a champagne bath. Or a big clubhouse party Right now, the man who powers baseball’s most underrated modern dynasty just wants a hug from his wife, So that is what Altuve looks for when he gets back onto the field after a spirited, but brief and anything but over-the-top Astros clubhouse celebration.
MLB・15 DAYS AGO