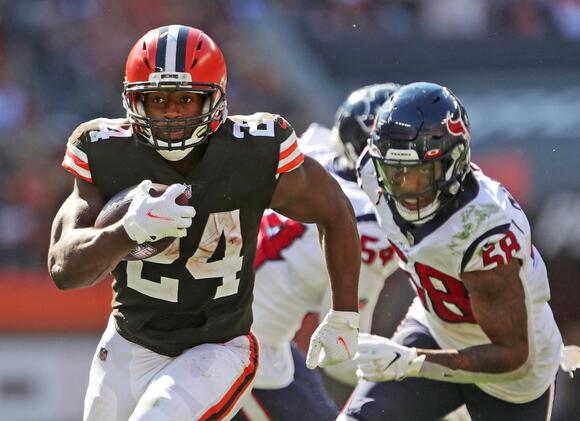 Check out odds, plays and more for the Cleveland Browns vs. Chicago Bears NFL Week 3 matchup on September 26, 2021.

Odds for Browns vs. Bears

Kareem Hunt Had Message For Mayfield After Injury

Cleveland Browns running back Kareem Hunt has Baker Mayfield‘s back (and shoulder). Hunt let Mayfield know this after the quarterback went down with a left shoulder injury while tackling a Houston Texan defender who intercepted Mayfield’s pass during Sunday’s game. Of course, everything turned out okay. Mayfield was only in...
NFL・27 DAYS AGO
WJW FOX 8 News Cleveland

CLEVELAND (WJW) — Emily Mayfield, who’s married to Browns QB Baker Mayfield, has a message for Cleveland fans after yesterday’s 47-42 loss to the Los Angeles Chargers. In her Instagram stories, she says Cleveland “fans” who are blaming Baker for the loss need to wake up. “You truly don’t know what you have. I have […]
NFL・7 DAYS AGO
The Spun

The Cleveland Browns have reportedly released a notable wide receiver just two weeks into the NFL’s 2021 season. The Browns have released wide receiver Davion Davis, per NFL insider Ian Rapoport. It’s a rather surprising move, especially when you consider how strong a performance Davis had during the preseason. The...
NFL・27 DAYS AGO
The Spun

Cleveland Browns quarterback Baker Mayfield will always have his critics. But one ESPN analyst had an especially harsh message for the former No. 1 overall pick. On Friday’s edition of Get Up, NFL analyst Bart Scott didn’t hold back in criticizing the Browns quarterback. Scott called Mayfield “the most replaceable QB” in the NFL and believes that nobody does less with more than him.
NFL・10 DAYS AGO

The return of Odell Beckham Jr. from his near year-long absence due to an ACL injury was slated to be a game-changing development for the Cleveland Browns offense. However, in the most recent two games of the 2021 NFL season, this hope has not yet come to fruition. In the...
NFL・9 DAYS AGO
FanSided

The Cleveland Browns announced today that quarterback, Baker Mayfield, has a partially torn labrum in his non-throwing shoulder. Should there be a concern?. The questions have been mounting for the Cleveland Browns the last two weeks, was Baker Mayfield’s shoulder healthy? He suffered a big hit vs. the Houston Texans and hasn’t really looked right since.
NFL・11 DAYS AGO
brownsnation.com

The Cleveland Browns saw running back Kareem Hunt grab his leg in a non-contact play during the loss to the Arizona Cardinals tonight. Things went from bad to worse when Hunt was loaded on a cart and driven into the locker room. Hunt is a tough guy in every sense...
NFL・17 HOURS AGO
The Spun

Baker Mayfield’s wife had a blunt message for Cleveland Browns fans – and the rest of the NFL – following last weekend’s crushing loss to the Los Angeles Chargers. The Browns lost a heartbreaker to the Chargers in Los Angeles, falling 47-42. While Mayfield played well in that game, he couldn’t get it done late, leading to a larger conversation about his ability to lead a team to a Super Bowl.
NFL・1 DAY AGO

Arizona Cardinals quarterback Kyler Murray and Cleveland Browns quarterback Baker Mayfield are friends. They have a lot in common. Both played collegiately at Oklahoma. Both won the Heisman Trophy. Both were drafted first overall. However, only one has wins in the NFL when they face each other. After the Cardinals...
NFL・14 HOURS AGO
Sports Illustrated

One of the most anticipated games of Week 6 will be played between the Cardinals and Browns on Sunday afternoon. TV: FOX (WXIN-TV – Indianapolis, IN) Live stream Cardinals at Browns on fuboTV: Start with a 7-day free trial!. Kyler Murray and the Cardinals have been dominant this season and...
NFL・1 DAY AGO
Sportsnaut

There’s been a lot of talk about Odell Beckham Jr. and his lack of an impact for the Cleveland Browns
NFL・20 HOURS AGO
News 5 Cleveland WEWS

The Cleveland Browns took another hit to their roster Sunday against the Arizona Cardinals as running back Kareem Hunt left the field with a leg injury in the fourth quarter.
NFL・19 HOURS AGO

The last two weeks have not been kind to Baker Mayfield and the Cleveland Browns. Their defense blew a 27-13
NFL・14 HOURS AGO
Sports Illustrated

Discover player props odds, plays, and insights for James Conner in his Week 6 contest with the Arizona Cardinals against the Cleveland Browns.
NFL・2 DAYS AGO
Sportsnaut

NFL Week 7 has arrived and it offers a ton of promise throughout the schedule. From epic primetime games to
NFL・20 MINUTES AGO
Sportsnaut

The 2021 NFL season is officially underway and Week 6 delivered some surprising performances across the league. With high-scoring games
NFL・6 HOURS AGO
Sports Illustrated

There aren't many impact defensive players still available, so here are some you should target
NFL・2 HOURS AGO
Sportsnaut