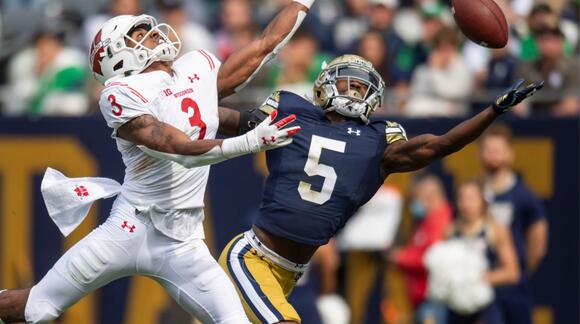 Hart, a 6-foot-3 sophomore, has turned into a lockdown cornerback for the Irish.

Hart started the interception parade for the Irish when he picked off a Mertz pass with 7:06 left in the first half. The Irish finished with four picks in the game, including two that were returned for touchdowns.

Hart stepped in front of Wisconsin receiver Kendric Pryor and took it away at the Badger 41-yard line.

The beauty of the interception was that two plays earlier, Hart had been whistled for pass interference.

Hart said he knew the pass was coming.

“I got there a little early on the prior play,” Hart said. “My coaches were like, ‘They’re going to come back to it. Just be ready and alert on the double move. The next play later, they came back with the same play and I just jumped in front of it.”

The interception set up a 36-yard touchdown pass from Jack Coan to Kevin Austin with 4:48 left in the second quarter. That gave Notre Dame a 10-3 lead.

The defense was outstanding, forcing five turnovers in the victory. The Irish (4-0) held the Badgers to 74 yards rushing. Wisconsin averaged 266 yards on the ground in the first two games and had only been held to under 100 rushing yards three times in the previous four seasons.

Notre Dame's two interception returns for scores in the fourth quarter to put the game away.

Hart said the defense has a play-loose approach.

“We just emphasized playing free earlier this week,” Hart said. “We just wanted to play with intensity. I felt like we did that.”

Hart said the Irish expect to force turnovers, and what we saw today is something this defense expects on a regular basis.

“I feel like in practice we do that so often (get interceptions),” he said. “It’s not unexpected. To see it come to fruition in a game, it’s crazy. We’re having fun out there and we understand the importance of playing free.”

Notre Dame coach Brian Kelly said everyone, including Hart, is just figuring it out on defense.

“I think I alluded to this when we've had our opportunities to answer questions about our defense was that we just need to tap the brakes early on about our defense,” Kelly said. “It takes some time to get everything in and there are layers to our defense. We've played a lot of man early on. We've added some of our dime and nickel packages and quite frankly we've got some guys making plays. Cam is a great example of it. Cam gets called for pass interference. He lets that go, which you have to at corner, and he steps underneath the same play for a pick. We're just developing and Marcus (Freeman) is getting his players to develop on defense and we're adding some layers to that defense."

Notre Dame doesn't play this weekend but that doesn't mean we don't have plenty of Fighting Irish topics to discuss. In our latest Irish Breakdown football mailbag we answered subscriber and listener questions about the Notre Dame football program. It's a show that is directed by the fans, who choose...
NOTRE DAME, IN・23 HOURS AGO
IrishBreakdown

Notre Dame Defense Must Make Adjustments Against Second Half Schedule

Notre Dame has done some very good things on defense during the 2021 season, and there have also been a few too many bouts of inconsistency. The numbers are always sexy, but when this unit is playing good on all three levels it has been very, very good. With the...
NOTRE DAME, IN・13 HOURS AGO
IrishBreakdown

Five Keys To Turning Around The Notre Dame Offense

Notre Dame has not lived up to expectations through the first half of the season, but the Irish are still sitting at 5-1 and ranked 14th in the nation. The second half schedule is quite manageable, with the final six opponents entering this weekend with a 17-19 combined record. Notre...
NOTRE DAME, IN・18 HOURS AGO
IrishBreakdown

The first six weeks of the season were a grind for Notre Dame, who enter the bye week with a 5-1 record and a No. 14 national ranking. Notre Dame's bye week came at a perfect time, and when they come out of it the Irish faithful hope that the program can continue its strong success following a break.
NOTRE DAME, IN・1 DAY AGO

Mike Brey And Notre Dame Are Ready To Turn The Corner ... Again

This is a perfect kind of moment for Notre Dame basketball coach Mike Brey. Nobody comes back from the dead like Brey. The Irish have had losing records in two of their last three years and they haven’t been to the NCAA Tournament since the 2016-2017 season. That’s a recipe...
NOTRE DAME, IN・1 DAY AGO
IrishBreakdown

Take 5: Five Biggest Concerns For Notre Dame In The Season's Second Half

Five things I’m unsure about going into the second half of the season. 1. Whether Brian Kelly will be able to solve the quarterback issues that Notre Dame has had. I believe much of these problems were self-inflicted. Jack Coan has been great at times but his performance overall isn’t consistent enough for him to be the runaway starter. Kelly has done everything possible not to play backup Drew Pyne, going so far as to say he wasn’t impressive enough during practice the week before Cincinnati to win the starting job. This after Pyne was the quarterback that led them to scoring drives in a 24-13 loss to the Bearcats.
NOTRE DAME, IN・2 DAYS AGO
IrishBreakdown

My five biggest takeaways from the open Notre Dame basketball scrimmage. 1. There’s a good “vibe” as Notre Dame basketball coach Mike Brey would say, around the program going into the 2021-2022 season. The energy level around Purcell Pavilion was amplified on Tuesday when JJ Starling, a consensus top 40 recruit from La Lumiere College Prep in LaPorte, committed to play for the Irish after a torturous Instagram press conference. The sound went out on Starling’s feed, and it took several attempts for it to get reconnected. It’s emblematic of recruiting for Brey.
NOTRE DAME, IN・2 DAYS AGO
IrishBreakdown

Notre Dame won't be back in action until Oct. 23 when it returns home to face its biggest rival, the Southern Cal Trojans. It begins a stretch of games that will determine just how this season will turn out. The Irish schedule sets up very, very nicely for a great...
NOTRE DAME, IN・2 DAYS AGO

This week isn't as loaded as last weekend from a big games standpoint but there are three games I definitely have my eye on this week!. The narrative is pretty clear for the Sooners. You have your quarterback; everything is better with the offense and the Big 12 is about to witness the power of what was unleashed on Texas in the second half last week. Meanwhile, TCU has been hammered by key injuries, starting with Max Duggan at quarterback. With all of that being said, Oklahoma has yet to beat a FBS opponent by more than seven points. However, the TCU defense has been atrocious all season long and hasn’t stopped anyone.
COLLEGE SPORTS・1 DAY AGO
IrishBreakdown

Notre Dame is now halfway through the 2021 season, and the Irish have a bye week to split up the season. That makes this the ideal time to take a dive into the team and offer up a midterm report. We'll begin that analysis with the Notre Dame offense, which came into the season with high expectations but has mostly struggled through six games.
NOTRE DAME, IN・3 DAYS AGO
IrishBreakdown

Notre Dame landed a huge commitment for its 2022 class when La Porte (Ind.) La Lumiere School guard JJ Starling gave them a verbal commitment. Starling is originally from Baldwinsville, New York and is a consensus top 40 player. He chose the Irish over Duke, Syracuse, Stanford, Northwestern and Maryland.
NOTRE DAME, IN・3 DAYS AGO
IrishBreakdown

Tyler Buchner Showed He Is Notre Dame's Future, But Is He The Present?

From the moment he committed to Notre Dame as a sophomore in high school, talented quarterback Tyler Buchner has generated a great deal of excitement among Irish faithful. After he passed for 4,474 yards, rushed for 1,610 yards and racking up 81 touchdowns as a junior during the 2019 season that excitement reached a fever pitch.
NOTRE DAME, IN・4 DAYS AGO

Take 5: Five Things I Am Most Confident With For The Second Half of the Season

What I’m most confident about going into the second half of the season for Notre Dame. 1. That Kyle Hamilton will intercept at least one more pass and make a big play that essentially leads to a Notre Dame victory. Hamilton, a 6-4, 220-pound safety, is a generational player for the Irish. ESPN’s Mel Kiper Jr. has Hamilton slated to get picked second in the 2022 NFL Draft.
NOTRE DAME, IN・4 DAYS AGO
IrishBreakdown

There are some huge upcoming games in the Big 12, which has been a very competitive league thus far. Last week's Oklahoma vs. Texas game was one of the most exciting of the season, and now the Longhorns must take on another undefeated team, the Cowboys of Oklahoma State. Oklahoma...
OKLAHOMA STATE・1 DAY AGO
IrishBreakdown

Upon Further Review: Breaking Down The Notre Dame Win Over Virginia Tech

Notre Dame went on the road and earned a hard fought and much-needed win at Virginia Tech. The team showed a lot of heart by not only bouncing back from the loss to Cincinnati the week prior, but also rallying from a 29-21 fourth quarter deficit. After the game Irish...
NOTRE DAME, IN・4 DAYS AGO
IrishBreakdown

Turns out the biggest game of the season in the SEC East isn't going to be Florida vs. Georgia. The emergence of the Kentucky Wildcats, 20-13 winners over the Gators two weeks ago, has given the No. 1 ranked Georgia Bulldogs another ascending program to vanquish. Georgia has sustained a...
GEORGIA STATE・1 DAY AGO

Barring an absolute collapse by Georgia this game likely isn't about SEC East titles or postseason positioning, this is about both Florida and LSU facing must-win situations. For Florida, a loss drops them to 4-3 with the Bulldogs still looming. It would make it very, very difficult for the Gators to avoid a second straight four-loss season, which would likely start to heat up the seat for head coach Dan Mullen. A win, of course, gives Florida a 5-2 record and sets up an opportunity for the Gators to make some real noise this season when it plays Georgia (Oct. 30).
FLORIDA STATE・1 DAY AGO
IrishBreakdown

The one nice thing about the 2020 season was there was no quarterback controversy, and I must admit, I rather enjoyed that. Whatever your opinion is or was of Ian Book, there was no debate that he was the man for the 2020 Irish football team. There were quarterback debates...
NOTRE DAME, IN・5 DAYS AGO
IrishBreakdown

The 2021 season certainly hasn't gone as expected for Notre Dame, or perhaps as hoped for, but despite the team's struggles the Irish are still 5-1, ranked 14th in the nation and still have a lot of great things to play for. I'm not talking about playing for 2022 or...
NOTRE DAME, IN・5 DAYS AGO
IrishBreakdown

It’s a strange formula for Notre Dame, but it’s worked so far. Watch Jack Coan sputter for the start of the game, then bring in another quarterback — this time it was Tyler Buchner. Buchner gives them a spark, leading them to a pair of touchdowns but he also struggles, throwing two interceptions.
NOTRE DAME, IN・6 DAYS AGO