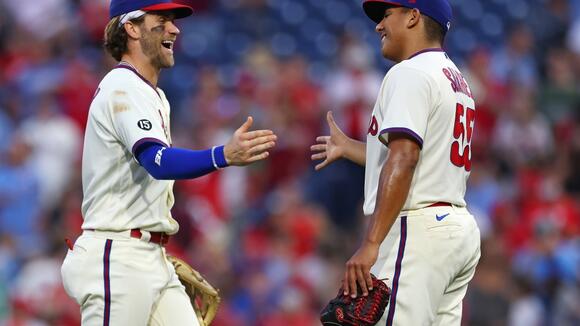 The Phillies began the day 1 1/2 games behind Atlanta in the NL East. Philadelphia visits the Braves in a three-game series beginning Tuesday.

Suarez (7-5) allowed just four singles, walked none and struck out seven in his first major league complete game. He didn’t permit a runner past first base and faced only one batter more than the minimum, keeping the Pirates off-balance and generating a lot of weak contact.

Moved from the bullpen into the rotation in August, the 26-year-old lefty had never thrown more than 6 2/3 innings in a game prior to this outing. But he was efficient with his 97 pitches and seemed to get stronger as the game wore on, striking out four consecutive batters in the seventh and eighth innings.

Harper hit his 34th home run and Matt Vierling hit his first major league homer as the Phillies (81-74) improved to a season-best seven games over .500.

Vierling and Harper both hit solo homers in the third off Will Crowe (4-8). Vierling also singled and walked.

Brad Miller added his RBI hit in the fifth inning to give Suarez an insurance run.

The Pirates have now lost nine of 10 in Philadelphia after winning three games at Citizens Bank Park in 2017.

Pirates: INF/OF Michael Chavis (right elbow strain) is close to returning. He has played two games at Triple-A Indianapolis as part of a rehab assignment and is expected to make two more before returning to the Pirates for the final week of the season. … RHP David Bednar (right oblique discomfort) threw a bullpen session Friday. Pittsburgh manager Derek Shelton said he’s getting closer and called Bednar “day-to-day.” … RHP J.T. Brubaker (right shoulder inflammation) is continuing to progress, but it is unclear if he will be able to return before season’s end.

Phillies: RHP Archie Bradley was placed on the injured list with a strained left oblique muscle. The injury will cost him the remainder of the regular season, but Bradley is hopeful the Phillies can qualify for the postseason and he can rejoin the team in the playoffs. Bradley had been pitching in a setup role out of the bullpen. The hope was that Connor Brogdon (strained right groin) would be back Saturday, but he is now scheduled for a rehab appearance Sunday in Triple-A, so the earliest he can return is Tuesday. As a result, the Phillies selected the contract of Triple-A LHP Kyle Dohy to fill Bradley’s spot. In order to select Dohy, the Phillies needed room on the 40-man roster and were able to create it by moving LHP Matt Moore (lower back strain) to the 60-day IL, ending his season. … RHP Sam Coonrod was again unavailable Saturday with a thumb issue. … OF Odubel Herrera, who usually leads off against righthanders, was not in the starting lineup. He was removed from Friday’s game with a sore left Achillies. The Phillies hope he can play Sunday.

Pirates: RHP Max Kranick (1-3, 7.28) will start for Pittsburgh in the series finale with Philadelphia.

Phillies: Due to injuries and ineffectiveness with depth starters, Philadelphia has been throwing a bullpen game every fifth day in September. They are due for another one in their 2021 regular season home finale Sunday against Pittsburgh. It’s possible Adonis Medina (0-0, 1.59) gets his second major league start after getting the call in the Phillies last bullpen game.

(© Copyright 2021 The Associated Press. All Rights Reserved. This material may not be published, broadcast, rewritten or redistributed.)

Since 1999 – the 25th anniversary of Hank Aaron surpassing Babe Ruth’s home run record – Major League Baseball has honored one player in each league with the Hank Aaron Award. Named for one of the greatest players in the history of the game, the accolade goes to “the best...
MLB・13 DAYS AGO
southjersey.com

The Phillies finished with a winning season for the first time since 2011, but it was a truly hollow achievement. At 82-80, the Phillies seemed to squander a chance to make the playoffs when the National League East was its weakest in recent memory. The Atlanta Braves won their fourth...
MLB・14 DAYS AGO
inquirer.com

The Phillies front office will gather later this month in Clearwater, Fla., to chart the team’s offseason plan. They’ll narrow their list of free agents and start targeting teams who could be open to trading. There are plenty of holes to fill after finishing with just 82 wins and missing...
MLB・14 DAYS AGO
FanSided

Bryce Harper says Phillies teammate Ranger Suárez deserves to be 2021 NL Comeback Player of the Year. In addition to being one of the most powerful bats in baseball in 2021, Bryce Harper was a true leader on the Philadelphia Phillies. He publicly praised his teammates for their accomplishments and...
MLB・13 DAYS AGO

In pushing for change, Dave Dombrowski believes Phillies can win in 2022

PHILADELPHIA — Even in an end-of-season press conference where president of baseball operations Dave Dombrowski made no substantive news, one distinction was still lost in 40 minutes of discussion. The Phillies, Dombrowski said, are aiming to compete for a division title and thus a World Series in 2022. But that...
MLB・14 DAYS AGO
CBS Sports

The Philadelphia Phillies continued to overhaul their coaching staff this week, hiring former Washington Nationals hitting coach Kevin Long to the same role, the team announced Wednesday. Long is an intuitive fit with the Phillies, as he has connections to both manager Joe Girardi and superstar outfielder Bryce Harper. Long...
MLB・8 DAYS AGO
FanSided

The Philadelphia Phillies‘ motto for the coming winter now appears to be: “What to do? What to do?” However, after an uninspired season featuring only two more wins than losses, a reality seems to be surfacing that everybody is dancing around – Bryce Harper is very politely “signaling” that he’s not entirely pleased.
MLB・8 DAYS AGO
FanSided

Phillies slugger Bryce Harper is happy to reunite with hitting coach Kevin Long. The first big move of the Philadelphia Phillies offseason is a reunion that involves not only Joe Girardi and Rob Thomson from their New York Yankees coaching days, but also MVP candidate-outfielder Bryce Harper. On Wednesday, the...
MLB・7 DAYS AGO

The biggest winner of the 2021 major league season is … the 2017 Houston Astros. Settle down. I have not come to exonerate or forgive the sign stealers. I would not argue with anyone who feels the players got off easy by not facing suspension, and the bans on, say, Alex Cora and A.J. Hinch should have been longer than one year considering their one-year expulsions came in the one year the major league season was 60 regular-season games.
MLB・26 DAYS AGO
The Spun

The Chicago White Sox were eliminated from the playoffs on Tuesday after losing Game 4 of their American League Division Series, 10-1, to the Houston Astros. The White Sox, specifically manager Tony La Russa, did not go quietly into the winter, however. Rather, La Russa made it clear that he...
MLB・8 DAYS AGO
Yardbarker

Baseball fans are about to see more of Joc Pederson over the next week as his Atlanta Braves get set to face the Milwaukee Brewers in the NLDS. There is something fans should know about him: he just started wearing a pearl necklace during games. Yes, beginning last week, Pederson...
MLB・15 DAYS AGO

Max Scherzer started the Wild Card game for the Los Angeles Dodgers tonight. He did not make it through the fifth inning. While Scherzer gave up just one run, Dodgers manager Dave Roberts pulled his ace with one out and two men on in the top of the fifth inning.
MLB・15 DAYS AGO
USA TODAY

"When you are doing (an interview) live something usually always happens," Dusty Baker said explaining his on-air reaction to Kiké Hernandez's homer.
MLB・6 DAYS AGO
FanSided

The New York Yankees flamed out of the 2021 MLB postseason after getting wrecked by the Boston Red Sox in a 6-2 American League wild-card game loss at Fenway Park on Tuesday. The Yankees crashing and burning against their fiercest rival and despite a luxurious payroll only add fuel to an offseason that’s going to have them answering plenty of questions, including whether the team’s future would still include veteran outfielder Brett Gardner — at least until the end of the 2022 MLB season.
MLB・15 DAYS AGO
CBS Sports

Verlander (elbow) is expected to receive a qualifying offer from the Astros this offseason, Chandler Rome of the Houston Chronicle reports. Verlander could potentially have an interesting decision on his hands. If healthy, he'd almost certainly receive more than the qualifying offer, which was worth $18.9 million over one year last year. He'll enter next season as a 39-year-old coming off of Tommy John surgery, so it's much less clear what his value will be on the open market. If he rejects the offer and signs elsewhere, Houston will receive draft-pick compensation.
MLB・14 DAYS AGO
FanSided

The Los Angeles Dodgers are fighting the San Francisco Giants for the NL West title and one of their fans is fighting security inside Dodger Stadium. Dodgers fans are dealing with some tough injury news surrounding Clayton Kershaw who had to leave Friday’s start early and his postseason availability is in doubt.
MLB・19 DAYS AGO
FanSided

Boston Red Sox fans let Kyle Schwarber have it for letting a pop-up land on the infield, and he probably had it coming. If you let Schwarber play first base long enough, something like this was bound to happen. The Sox knew this when they acquired him from the Washington Nationals, and they sure as hell didn’t trade for him because of his defensive ability.
MLB・27 DAYS AGO
Audacy

Josh Donaldson has been following his former team rather closely this October and the former Atlanta Braves slugger and current Minnesota Twins third baseman had some thoughts about Tuesday’s Game 3 NLCS against the Los Angeles Dodgers. Donaldson was live-tweeting during the game and began to tear into the Dodgers...
MLB・2 DAYS AGO