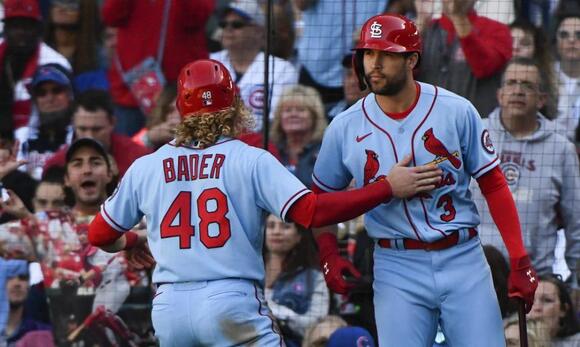 Paul DeJong hit a two-run homer and a sacrifice fly as the visiting St. Louis Cardinals rallied past the Chicago Cubs 8-5 Saturday for their team-record 15th straight victory.

Harrison Bader added a solo homer and RBI single as the Cardinals (86-69) reduced their magic number for reaching the National League wild-card game to three.

Cubs starting pitcher Adrian Sampson held the Cardinals to two runs and three hits in his six innings. Reliever Codi Heuer (7-3) retired none of the four batters he faced and allowed the decisive runs in taking the loss.

The Cubs responded by taking a 2-1 lead in the third inning as Willson Contreras hit an RBI double and Happ delivered an RBI single.

Tyler O’Neill tied the game 2-2 with a solo homer in the fourth inning.

But the Cubs moved ahead 4-2 in their half of the inning. Contreras hit an RBI single and Happ drew a bases-loaded walk.

Against Heuer in the seventh inning, Nolan Arenado hit a leadoff double and Yadier Molina, Bader and Lars Nootbaar followed with singles to tie the game 4-4.
Molina’s single was his 2,111th career hit, which moved him past Rogers Hornsby for third place in Cardinals history. 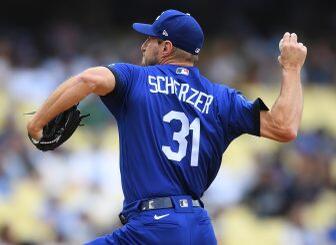 DeJong greeted reliever Scott Effross with a sacrifice fly to put the Cardinals up 5-4.

In the ninth inning, Bader hit a one-out double, stole third base and scored as Nootbaar struck out but reached first base on a wild pitch. DeJong’s homer then made it 8-4.

Happ’s solo homer in the bottom of the inning cut the lead to 8-5.

Chicago Cubs: 3 free agents who are a perfect fit at Wrigley

Following the conclusion of the 2021 postseason, the Chicago Cubs will have a lot of shopping to do if they want to have any shot at contending next season. The front office has already made a handful of changes in the coaching department and also hired a new GM to help Jed Hoyer carry the load this winter.
NFL・9 DAYS AGO
bleachernation.com

There was some light Cubs-Trevor Story chat earlier this year, and there was the report yesterday about the Cubs doing some background work on the top free agent shortstops, so I don’t want to act like this is coming completely out of nowhere. Just like I said with Carlos Correa (and have said with Javy Báez), yeah, there are versions of a Cubs-Trevor Story marriage this offseason that could at least become plausible. It’s not like I don’t want any of these guys on the Cubs! I’m just trying to take a realistic assessment of both the market and the Cubs’ situation.
NFL・5 DAYS AGO
FanSided

Who would you like to see the St. Louis Cardinals purse amongst the long list of available free agents this offseason?. While St. Louis Cardinal fans scratch their heads about the “philosophical differences” between the president of baseball operations John Mozeliak and former manager Mike Shildt, the team still has business to attend to this offseason.
NFL・9 DAYS AGO
FanSided

Here are the projected arbitration salaries for eight St. Louis Cardinals players, including Tyler O’Neill and Jack Flaherty. With the St. Louis Cardinals’ season over, it’s time to turn the page to the offseason. For the next few months, many players via free agency or trade will be connected to...
MLB・14 DAYS AGO

The St. Louis Cardinals need a manager. It's time to get past all of the assumptions as to why Mike Shildt was fired, it's time to stop figuring out what "philosophical differences" truly means — because we'll probably never know for sure. It's time to figure out who is going...
MLB・7 DAYS AGO
FanSided

If the Chicago Cubs choose not to spend this winter, it certainly isn’t because the funds aren’t available. Even if ownership balks at the idea at returning to pre-pandemic spending, Jed Hoyer will still have north of $100 million to spend this winter. The team has just three guaranteed deals...
MLB・7 DAYS AGO
FanSided

It is time for the prodigal son to return home to the St. Louis Cardinals. After a decade away from the franchise, Albert Pujols is set to enter free agency once again. Unlike last time, his market will not be nearly as robust, as it is clear that he is ending the end of the road. In fact, it is uncertain as to whether or not he would even want to play in 2022, although his respectable performance with the Dodgers would indicate that he may have a bit left in the tank.
MLB・1 DAY AGO

He thinks his connection to the franchise and his ability to lead men make him a strong candidate.
MLB・11 DAYS AGO
Bleed Cubbie Blue

An update on Javier Báez, Kris Bryant, Anthony Rizzo and other former Cubs

Here is a list of all the former Cubs who are eligible for this year’s postseason, including those traded away or who departed as free agents before the 2021 season (note, only players who actually played for the MLB Cubs are included, not players who only played in the Cubs minor league system such as Daniel Vogelbach):
MLB・22 DAYS AGO
FanSided

The St. Louis Cardinals dropped a bombshell on Thursday afternoon, parting ways with manager Mike Shildt because of what was called “a philosophical difference.”. Jon Heyman of MLB Network called it the “surprise firing of the season” and many were shaking their heads after Shildt, who still had a year left on his contract and had led the Cardinals to three consecutive postseason berths, was suddenly out of a job.
MLB・12 DAYS AGO
670 The Score

Shortstop Javier Baez is set to hit free agency for the first time in his career, and there’s still a strong connection between him and the Cubs organization, as Audacy Sports insider Jon Heyman explained on the Mully & Haugh Show.
MLB・9 HOURS AGO

I have been watching Marvel’s What If…? recently. The show has me wondering about many what if’s in my life. What if I hadn’t met my girlfriend? What if I played college football? And, most importantly, what if Nolan Arenado had played for the Colorado Rockies in 2021? How many more games would they have won? They were better than everyone expected. Could they have been a playoff team? Let’s get into it.
MLB・14 DAYS AGO
FanSided

Heading into this season, if there was one guy you felt like had a solid chance of re-signing with the Chicago Cubs long-term, odds are it was Anthony Rizzo. But then extension talks went sideways in the spring and he was eventually traded to the Yankees one day prior to the trade deadline back in July.
MLB・10 HOURS AGO
KMOV

(KMOV.com) — The St. Louis Cardinals roster is going to look a little different in 2022, with a few noteworthy contracts coming off the books this off-season. In addition, several of the club's mid-season pitching acquisitions are free agents this winter. Might the Cardinals look to bring any of them back on new contracts?
NFL・12 DAYS AGO
FanSided

Carlos Correa hints that an extension with Astros is unlikely

Carlos Correa’s top priority is getting the Astros back to the World Series, so while the star shortstop’s free agency will be a hot topic once the season is over, Correa doesn’t want his 2021 campaign to end any time soon. However, Correa did address his pending trip to the open market while speaking with NBC Sports Chicago’s Gordon Wittenmyer, and seemed to hint that a reunion in Houston seems unlikely.
MLB・12 DAYS AGO
FanSided

Corey Seager is an unlikely target for the St. Louis Cardinals — and it all comes down to the free agents likely $300+ million contract. The St. Louis Cardinals want to upgrade the shortstop position. That might be the worst kept secret in the National League Central. But when it comes to actually upgrading the position, they may not be able to sign the top players available this winter.
MLB・2 DAYS AGO
News-Democrat

Who should be the next manager of the St. Louis Cardinals? BND readers weigh in

While the St. Louis Cardinals leadership team deliberates on who should manage the team, BND readers are weighing in. Here is a sampling of readers’ responses to the question: Who would you like to see as the new manager for the Cardinals?. Please excuse typos and any other awkward language...
MLB・7 DAYS AGO