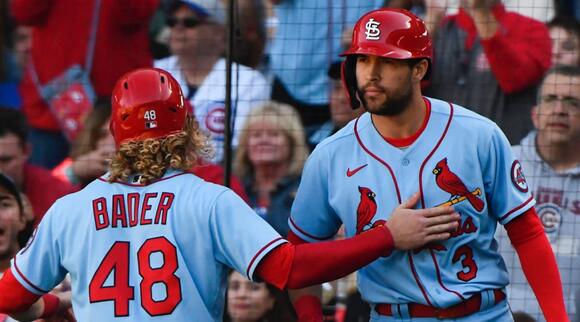 The Cardinals continue their September surge to run their winning streak to a club-best 15 games.

The Cardinals's September winning streak has seen a little bit of everything over the past two-plus weeks. Saturday's victory over the Cubs featured a late-inning comeback, a wonky double play and a place in history.

St. Louis topped Chicago, 8-5, to notch its 15th consecutive victory, setting a new franchise record in the process. The Cardinals trailed, 4-2, but scored three runs in the top of the seventh inning to grab the lead for good.

The Cubs had a chance to tie the game or take the lead in the bottom of the eighth, putting runners on the corners with no outs. After a strikeout, St. Louis pulled off an unorthodox inning-ending double play that included the catcher Yadier Molina, all four infielders and center fielder Harrison Bader.

On Sept. 11, the date of the team's most recent loss, the Cardinals were 71-69 and three games behind the Reds for the second wild card spot. Now, they're 5.5 games ahead of the Phillies for that slot, with a magic number that's now dwindled down to three games with seven to play.

If St. Louis runs the table, the club will tie Cleveland's 22-game unbeaten run in 2017 for the longest winning streak in MLB history that wasn't interrupted by any ties. The Cards wrap up the regular season with four more games against the Cubs and three against Milwaukee, opponents that comprise the last seven wins of the now-historic streak.

Will the Chicago Cubs move past the World Series champion core for good this winter? Or is a reunion (or reunions) in the cards? That’s been heavily debated among fans for the past month-and-a-half or so after Jed Hoyer sold off everything not bolted down at the July 30 deadline.
MLB・28 DAYS AGO
New York Post

The biggest winner of the 2021 major league season is … the 2017 Houston Astros. Settle down. I have not come to exonerate or forgive the sign stealers. I would not argue with anyone who feels the players got off easy by not facing suspension, and the bans on, say, Alex Cora and A.J. Hinch should have been longer than one year considering their one-year expulsions came in the one year the major league season was 60 regular-season games.
MLB・27 DAYS AGO
FanSided

Max Scherzer started the Wild Card game for the Los Angeles Dodgers tonight. He did not make it through the fifth inning. While Scherzer gave up just one run, Dodgers manager Dave Roberts pulled his ace with one out and two men on in the top of the fifth inning.
MLB・15 DAYS AGO

Baseball fans are about to see more of Joc Pederson over the next week as his Atlanta Braves get set to face the Milwaukee Brewers in the NLDS. There is something fans should know about him: he just started wearing a pearl necklace during games. Yes, beginning last week, Pederson...
MLB・16 DAYS AGO
CBS Sports

The Chicago White Sox were eliminated from the playoffs on Tuesday after losing Game 4 of their American League Division Series, 10-1, to the Houston Astros. The White Sox, specifically manager Tony La Russa, did not go quietly into the winter, however. Rather, La Russa made it clear that he...
MLB・9 DAYS AGO
FanSided

The Los Angeles Dodgers are fighting the San Francisco Giants for the NL West title and one of their fans is fighting security inside Dodger Stadium. Dodgers fans are dealing with some tough injury news surrounding Clayton Kershaw who had to leave Friday’s start early and his postseason availability is in doubt.
MLB・20 DAYS AGO
KAJA KJ 97

Astros fans were living for these guys.
MLB・21 DAYS AGO

Jose Altuve was targeted by Boston Red Sox fans with a profane chant during Game 3 of the ALCS at Fenway Park on Monday night. Red Sox fans could be heard chanting, “f— Altuve” during Game 3. The chants began early in the game, according to reporters in attendance. The chants continued even in the third inning after Altuve was unable to pick a throw that bounced into second while covering the bag.
MLB・3 DAYS AGO
FanSided

Boston Red Sox fans let Kyle Schwarber have it for letting a pop-up land on the infield, and he probably had it coming. If you let Schwarber play first base long enough, something like this was bound to happen. The Sox knew this when they acquired him from the Washington Nationals, and they sure as hell didn’t trade for him because of his defensive ability.
MLB・27 DAYS AGO
Larry Brown Sports

Carlos Correa once again came up huge for the Houston Astros in October. He had the celebration to match. The Astros came back to beat the Boston Red Sox 5-4 in Game 1 of the ALCS on Friday night in Houston. The Red Sox led 3-1 after scoring three in the third. They carried that lead until Jose Altuve tied it with a 2-run home run in the bottom of the sixth. An inning later, Correa gave his Astros the lead in a huge moment.
MLB・6 DAYS AGO

The Braves held a 3-1 lead going into Game 5 last season before the Dodgers won the rest of the 2020 NLCS and eventually the World Series.
MLB・13 HOURS AGO
Sporting News

The day Chuck Hughes died: Remembering the only NFL player to die in a game

The pass, on third and 1, sails incomplete as the clock ticks down in the fourth quarter. He had lined up on the right side of the formation as the Lions, trailing 28-23, try to mount a comeback against the rival Bears. He races downfield on a post pattern, but Greg Landry’s pass, intended for tight end Charlie Sanders, sails incomplete.
NFL・16 HOURS AGO
FanSided

MLB announced they are extending Braves outfielder Marcell Ozuna’s administrative leave through the playoffs. Ozuna has been away from the team since he was investigated on domestic violence charges in late May. On Sept. 9, the Braves outfielder entered a plea deal to get those charges dropped, but in doing so will enter a diversion program that will last three-to-six months. MLB is rightly waiting for Ozuna to complete said program and get the charges dropped.
MLB・23 DAYS AGO
Larry Brown Sports

Remember during the AL Wild Card Game a few years back between the New York Yankees and Oakland Athletics? A matchup that resulted in a 7-2 victory for the Bombers was overshadowed by the baseball community whining about an innocent A’s fan getting three ounces of beer dumped on his head during a home run celebration.
MLB・14 DAYS AGO
NESN

Boston Red Sox pitcher Nathan Eovaldi has high praise for teammate Xander Bogaerts. The shortstop was a huge contributor to the team long before the 2021 season, even despite the slump that plagued him before the playoffs. That continued Friday night in Game 2 of the American League Division Series, where he batted 3-for-5 with two runs and two RBIs and a homer against the Tampa Bay Rays.
MLB・12 DAYS AGO
USA TODAY

It's the question everyone is asking: Why is Joc Pederson wearing a pearl necklace? If there's anyone who can pull it off, it's the Braves outfielder.
MLB・1 DAY AGO