By Bob Rose
SaintsNewsNetwork
26 days ago 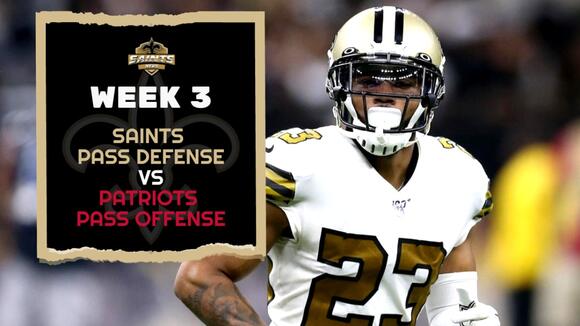 The New Orleans Saints have a week three road clash against the New England Patriots. Both teams come into the game with 1-1 records.

The Saints got here with a 38-3 rout of Green Bay on opening day, but fell 26-7 at Carolina last week. They were missing several assistant coaches and key defensive contributors, but also turned in a disappointing performance in several aspects of the game.

New Orleans gave up over 300 yards passing to Panthers QB Sam Darnold and were out-of-sorts throughout the first half. They still have the league's 7th ranked defense after two weeks and look to cause more disruption with the return of several defensive players from injury.

New England comes into the game ranked 23rd in total offense. They are in their second year without future Hall of Fame QB Tom Brady, but have run an attack focused on balance and ball control over the last few seasons. Rookie QB Mac Jones has run an efficient attack that has turned the ball over just twice, but he’s been supported by an effective running game.

The Saints have a terrific run defense that has the ability to make the Patriots one-dimensional. If successful, they'll still have make plays against Jones in what is expected to be a tight contest.

Lattimore, Gardner-Johnson, and Kpassagnon are expected to return this week. However, Onyemata (suspension), Alexander, and Davenport (injured reserve) will miss the next several games.

First-round rookie DE Payton Turner had a spectacular debut against the Panthers without Davenport and Kpassagnon. Turner, a freakish athlete, had a sack and 5 pressures against Carolina.

Pro Bowl DE Cam Jordan has had a quiet start to the year statistically, but managed some key pressures in each of the first two games. Carl Granderson adds strong depth along the edge, while Kpassagnon gives the defense disruptive snaps at either end or defensive tackle.

The Saints defensive tackles aren't household names without Onyemata. Shy Tuttle, Christian Ringo, and Malcolm Roach all have the ability to push a pass pocket back towards the quarterback. Jordan, Turner, and Kpassagnon also have the ability to move inside in passing situations.

Defensive coordinator Dennis Allen plays an aggressive scheme focused on pressuring the quarterback. The Saints have 4 sacks and 10 QB hits through two games after 145 sacks over the previous three years.

Most of their disruption comes from their deep defensive line, but Allen loves to blitz opposing passers. Defensive back Bradley Roby had a sack last week, S P.J. Williams caused an interception with a hit on Darnold, and LB Demario Davis is a lethal blitzer.

Davis, one of the NFL's best all-around defensive players, is equally effective in coverage, as a pass rusher, or in run defense. He’s athletic enough to take on a running back out of the backfield or a tight end in man coverage down the field.

Second-year LB Zack Baun struggled mightily in coverage against Carolina after a standout preseason. Baun must improve quickly in coverage responsibilities without Alexander.

Rookie LB Pete Werner, a second-round selection, will see his first action after missing significant time with a hamstring injury. Werner is an athletic defender who upgrades the coverage unit.

Once looked at as a team weakness, the Saints cornerbacks are emerging as a defensive strength. Pro Bowl CB Marshon Lattimore is among the league's best at the position, capable of shutting down elite wideouts in one-on-one matchups. Rookie third-round choice Paulson Adebo has had a strong start, despite being heavily targeted.

Adebo has allowed less than 59% completion percentage when targeted for only 104 yards while recording one interception.

Veteran CB Bradley Roby also had a strong outing last week after being acquired in a trade from Houston. Chauncey Gardner-Johnson is one of the NFL's best in slot coverage, while veteran CB Desmond Trufant provides quality depth.

Lattimore, Roby, and Adebo all have the coverage abilities to play an aggressive man-to-man scheme while also possessing terrific recognition off the ball. Those skills allow Allen to use his safeties in several different roles.

Veteran S Malcolm Jenkins is a liability in man coverage, but extremely valuable near the line of scrimmage and in deep support over the top. Marcus Williams has terrific range at free safety. He has the athleticism and recognition to be effective in single-high safety alignments or alongside Jenkins in two-deep formations.

Jones has completed 74% of his throws for 467 yards and only one touchdown, but no interceptions so far.

The Patriots rank just 26th in passing yardage after two games. Jones attacks defenses with safe passes, taking little chances down the field at this early stage of his career.

New England's leading receiver is once again RB James White, who’s pulled in 12 of 13 targets for 94 yards. White has averaged 65 receptions over the previous five years. He figures to be a major part of the passing game as Jones develops.

The Patriots are thin at wideout. Jakobi Meyers, Nelson Agholor, and Kendrick Bourne get most of the snaps at the position.

Meyers has 10 receptions for 82 yards, while the veteran Agholor has 8 catches for 93 yards and the team's only receiving touchdown. Bourne, the best deep threat on the team, has just 3 receptions for 27 yards.

New England focused on upgrading the tight end position this offseason, bringing in veteran receiving threats Hunter Henry and Jonnu Smith. Henry has 5 receptions for 73 yards, while Smith has caught 9 passes for 70 yards. Both players can threaten defenses off the line of scrimmage or from the slot down the field.

Jones has been sacked four times, including three in last weeks win over the Jets, but was hit 9 times in a season-opening loss to Miami. Most of that pressure came from the edges, where LT Isaiah Wynn and RT Trent Brown must shore up pass protection for their quarterback.

New Orleans must first shut down the Patriots rushing game to eliminate a balanced attack and force Jones to beat them with his arm. Dennis Allen will young quarterback relentlessly to try and force mistakes.

The Saints must be able to contain White out of the backfield and control New England's talented tight ends. After Baun's struggles in coverage last week, look for Demario Davis and Pete Werner to be used heavily in coverage roles.

The return of both Lattimore and Gardner-Johnson is huge for the defense. New Orleans has an advantage, on paper, with their defensive backs against the Patriots wideouts.

I expect the Saints to use Gardner-Johnson and a cornerback on the New England tight ends, especially when they line up in the slot. That will allow their linebackers to attack White coming out of the backfield in an attempt to take away the quick passes.

New Orleans will likely play heavy man coverages, expecting that their edge rushers can get to Jones along the outside, while bringing timed blitzers up the middle.

Get more Saints News delivered to your inbox for FREE!

The Buccaneers wild win over the Patriots on Sunday didn't just allow Tom Brady to get revenge on his old team, the victory also allowed Brady to enter a very exclusive club. Thanks to the victory, Brady is now just the fourth quarterback in NFL history to defeat all 32 teams, joining Peyton Manning, Drew Brees and Brett Favre.
NFL・16 DAYS AGO
On3.com

Former All Pro New Orleans Saints quarterback and future Hall of Famer Drew Brees had some choice words about the Saints offense. On NBC’s Football Night in America on Sunday , Brees was critical of the Saints offense with Jameis Winston under center. “It was a little sloppy. I don’t...
NFL・10 DAYS AGO
The Spun

The Green Bay Packers will be without a notable starter on defense tonight. Green Bay announced on Sunday afternoon that veteran defensive back Kevin King has been added to the OUT list for Sunday night’s game. King, 26, is dealing with an illness, according to the team. “Kevin King (illness)...
NFL・25 DAYS AGO
houstonianonline.com

Things started off differently James Winston and the New Orleans Saints In the Week 5 game with the Washington Football team on Sunday. Winston threw an interception to start the game, then an impressive 72-yard touchdown, then a confused cough, and you just had to know that head coach Sean Payton would probably start working on the quarterback and assistant quarterback. Tsum Hill Just a little more. Unfortunately, Hill was the victim of an illegal helmet-to-helmet kick from the back corner William Jackson The third that led to Hill being moved to the locker room.
NFL・11 DAYS AGO

Two weeks ago, the New Orleans Saints brought in a handful of running backs for a workout. On Tuesday, the team officially added some depth to that position group. According to ESPN insider Adam Schefter, the Saints are signing former Pro Bowl running back Lamar Miller to their practice squad.
NFL・3 DAYS AGO
Sportsnaut

The Cleveland Browns have an awesome offense led by Baker Mayfield, Nick Chubb, and Kareem Hunt. Notice how we didn’t
NFL・7 DAYS AGO
HOT 107.9

Do the New Orleans Saints have a new rival in the NFL?. For decades, Saints fans have had a very pointed disdain for the Atlanta Falcons. Every season when the New Orleans Saints schedule would drop, fans would circle both dates with their NFC South rival with an extra red circle around the home date as they looked forward to bringing the noise to Atlanta in the Superdome.
NFL・2 DAYS AGO
SaintsNewsNetwork

Saints News Network's Fantasy Analyst Brendan Boylan looks at three players who could start in place of Alvin Kamara during his BYE in Week 6.
NFL・6 DAYS AGO

Pass rusher Whitney Mercilus agreed to a deal with the Green Bay Packers on Wednesday, according to reports. Mercilus was
NFL・1 DAY AGO
WWL-AMFM

Saints TE Adam Trautman's receiving role has been limited, and there’s a good reason why

Adam Trautman hasn’t caught many passes, but don’t fool yourself into thinking he’s been slacking off. We took a deep dive into just what’s been slowing the second-year TE through 5 games. See more on WWL and Audacy.
NFL・1 DAY AGO
SaintsNewsNetwork

The Saints carried a winning record into their bye week despite the absence of a long list of talent. This team will now be back near full strength by Halloween, and poised to send a wave of terror through the rest of the league
NFL・9 DAYS AGO
SaintsNewsNetwork

The second injury report of Week 3 is out for the Saints, which gives us some more encouraging news on potential player availability.
NFL・28 DAYS AGO
SaintsNewsNetwork

Potential players returning, the division and playoff picture, as well as the flow to Week 7 highlight things to look forward to for the Saints.
NFL・3 DAYS AGO
SaintsNewsNetwork

Contrasting specialties between coaching legends Sean Payton and Bill Belichick could determine the winner of the week 3 clash between New Orleans and New England.
NFL・26 DAYS AGO
SaintsNewsNetwork

Game Balls from the Saints' 28-13 Victory Over the Patriots

Saints Offense and Jameis Winston Seek to Rebound Versus Patriots

Jameis Winston and the New Orleans offense seek to rebound versus Mac Jones and the revitalized New England Patriots.
NFL・25 DAYS AGO
SaintsNewsNetwork

After such a disappointing showing last week against the Panthers, the Saints rebound in a big way in Gillette Stadium.
NFL・25 DAYS AGO
SaintsNewsNetwork

A closer look at Week 3's Saints snap counts with some observations from their big road win against the Patriots.
NFL・25 DAYS AGO
SaintsNewsNetwork

The refusal of New Orleans to surround their quarterback with viable threats at wide receiver could handcuff the offense all season.
NFL・29 DAYS AGO
FanSided

This space has been touting New England Patriots quarterback Mac Jones’ passing accuracy for months (look, you have to get something right once in a while), but you’d better believe that it is otherworldly. Once again, the Patriots under the Kraft/Belichick regime have stumbled (yes, luckily) again upon a Golden...
NFL・2 DAYS AGO