Saturday at the Ryder Cup: Team USA fans are filled with hope and optimism 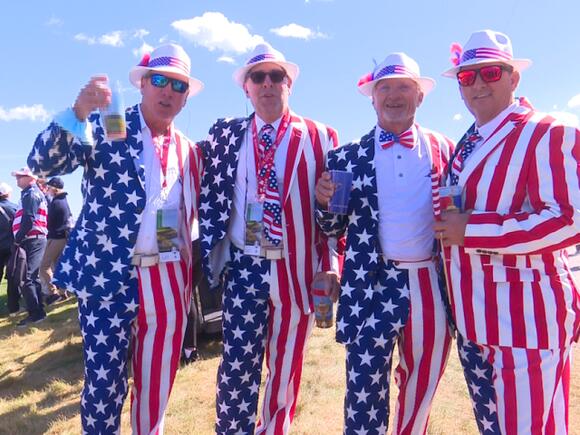 Saturday marked another fun-filled day at the Ryder Cup.

Thousands of golf fans came out ready to cheer on their respective teams, and for many, that was Team USA.

Across Whistling Straits you could feel a sense of hope and optimism as the team seeks to win the cup back from the Europeans.

Thousands of fans made their way from near and far for an experience of a lifetime.

"Our first time both of us being at a Ryder Cup event and the atmosphere is unbelievable, especially after the past year and a half that we've had. Seeing everybody out here having a good time, the camaraderie and all that, it’s great,” said Kevin Nolan, Chicago.

Nolan and his father left their house at 3:30 a.m. on Saturday to drive to the event.

As big golf fans, the two describe it as one of those can't-miss events.

"It’s a once in a lifetime experience, you have to go if it's that close. I'd kick myself for the rest of my life if I never came up here and it's that close to where I live,” Nolan said.

For other fans they say they've been hooked after the first Ryder Cup they attended.

"This is our 4th Ryder Cup. We come often, so we dress up," said a fan from Florida.

"We've been golf fans, long-life friends and this is our 3rd Ryder Cup out here," said another fan from New York.

And while Team USA continues its momentum on the course, other European fans aren't too happy.

Team USA needs at least 14 and a half points to win it back.

Sunday's single matches will begin at about 11 a.m.

The winning team trophy presentation is expected to take place following the end of play on Sunday.

Paige Spiranac made a hole-in-one on Monday and not only had a handful of witnesses, but one was Gary Player. Spiranac aced the 148-yard, par-3 14th at GlenArbor Golf Club in Bedford Hills, New York at the Berenberg Invitational, a charity event to raise money for pancreatic cancer research. Player’s wife, Vivienne, died from the disease earlier this year.
BEDFORD HILLS, NY・19 DAYS AGO
St. Louis Post-Dispatch

Bradie Tennell has withdrawn from this week’s Skate America due to a foot injury, U.S. Figure Skating announced Monday morning. Tennell, 23, who won the U.S. Figure Skating Championships in January – reclaiming the title after three years – was set to make her season debut this weekend in Las Vegas. The women’s short program is Saturday and the free skate Sunday at the Orleans Arena.
LAS VEGAS, NV・6 DAYS AGO
thespun.com

Golf-Japanese Matsuyama in search of momentum at Zozo Championship

(Reuters) – Asia’s first Masters champion Hideki Matsuyama will look to find momentum at this week’s Zozo Championship in his country Japan after a slow start to his 2022 season, the 29-year-old said on Wednesday. Matsuyama made history last season when he become the first Japanese man to win a...
GOLF・4 DAYS AGO
KHON2

The Hawaii High School girls volleyball season is in full swing and so is the state’s most dynamic talent. Two weeks ago, Kamehameha senior Devin Kahahawai returned to the Warriors after winning a bronze medal with Team USA’s U18 squad at the FIVB World Championships in Mexico. “It was honestly...
HONOLULU, HI・6 DAYS AGO
chatsports.com

It’s hard to call last season a disappointment for Xander Schauffele. He won an Olympic gold medal. He played a key role for the victorious U.S. Ryder Cup team at Whistling Straits. He notched seven top-5 finishes. However, he also didn’t win an official tournament. “It's an interesting feeling,” Schauffele...
GOLF・11 DAYS AGO
SkySports

The world No 2 was the oldest player in Steve Stricker's side for their record-breaking 19-9 victory at Whistling Straits last month, where he became the first American player to win all five of his matches since Lanny Wadkins in 1979. Johnson has featured in five of the last six...
GOLF・11 DAYS AGO

Justin Thomas has already earned more than $44 million in prize money over the course of his seven-year PGA Tour career, so it’s safe to say that his closet at home in South Florida is pretty sizable. It just doesn’t have room for any more Team USA gear. Thomas, who...
GOLF・12 DAYS AGO
Golf Digest

Dustin Johnson put forth an all-time performance during Team USA's historic rout at the Ryder Cup last month. But despite clearly having a lot more great golf in him, he's already fielding questions about being captain someday as the young squad's oldest member. By far. "Yeah, I would love to...
GOLF・10 DAYS AGO
NBC 26 WGBA

PULASKI (NBC 26) — JD Sterckx has had his mullet since he was in second grade. "We went to the barber shop one day, and I wanted to get my haircut just like my favorite baseball player, Kris Bryant," he said. "And then my mom asked, 'Are you sure you want to get this?' And I said, 'Yeah, I do want to get this.'"
PULASKI, WI・14 DAYS AGO
Sporting News

Like it or not, the USA's 2022 World Cup hopes are in the hands of its young players

Of the 11 players who started for the U.S. men’s national team Wednesday night against Costa Rica, not one was alive when this country served as host for the FIFA World Cup. That was in 1994, only 27 years ago. Some of the games were played in Dallas, where striker Ricardo Pepi now plays in Major League Soccer. At that point, he was eight years from being born.
NFL・10 DAYS AGO

Team USA and TikToks: Rugby has 405 million global fans, and players like former Bobcat Ilona Maher are a reason why

If you spend time on TikTok, chances are you’ve seen Ilona Maher. The Quinnipiac graduate and player on the U.S. women’s rugby team recorded engaging videos documenting her time in the 2020 Tokyo Olympics. If you take the time to continue to scroll through, you will find that her account...
TV & VIDEOS・13 DAYS AGO
Herald & Review

White Sox fans have high hopes for the team’s future

Regardless of Tuesday’s score and the season-ending loss, White Sox fans said they believe in what the team is building. Roland Rodriguez, of Bourbonnais, likes the team’s direction and the players it has brought together to get to the playoffs two years in a row. “This hurts. This will hurt...
MLB・11 DAYS AGO
MLive.com

CHARLEVOIX, MI – Three Michigan men are preparing to make every golfer’s dream a reality when they play a round at the oldest golf course in the world. Ross Hays and Jerry Esselman are members at Belvedere Golf Club in Northern Michigan. They, along with Belvedere head pro Marty Joy will represent the United States in the annual Hickory Grail Cup Matches held at the famed St. Andrews Old Course in Scotland from Oct. 24 to Oct. 29.
MICHIGAN STATE・12 DAYS AGO
golfmagic.com

The Ryder Cup did not go particularly well for Padraig Harrington and Team Europe at Whistling Straits. They were humbled and lost 19-9 against a merciless United States team who were urged by Tiger Woods to "step on their necks". And while the immediate inquest into the defeat has seemingly...
GOLF・12 DAYS AGO

Rory McIlroy has vowed to reap the positives from his Ryder Cup meltdown as he prepares to return to action at the big-money CJ Cup in Las Vegas this week. McIlroy broke down in tears in a rare show of emotion after winning his singles match against Xander Schauffele in Europe’s ill-fated quest at Whistling Straits in Wisconsin.
GOLF・11 DAYS AGO
golfmagic.com

The Ryder Cup may well and truly be over but there is still news filtering out from the aftermath. Justin Thomas is auctioning off his shoes, a signed headcover and a pin flag signed by the winning United States team. While it was also revealed that the motivational text message...
GOLF・9 DAYS AGO
SkySports

Ian Poulter, Paul Lawrie and Stephen Gallacher are among the golfers to have paid tribute to well-known golf broadcaster and journalist Renton Laidlaw, who died on Tuesday aged 82. The veteran journalist, a former recipient of the Jack Nicklaus Memorial Award for golfing journalism, passed away at Ninewells Hospital in...
GOLF・11 DAYS AGO
BBC

Rory McIlroy says he was "surprised" by his emotional reaction to his disappointing Ryder Cup performance. The four-time major winner broke down in tears after beating Xander Schauffele in his singles match. The Northern Irishman lost all three of his other matches as the United States regained the cup with...
GOLF・10 DAYS AGO