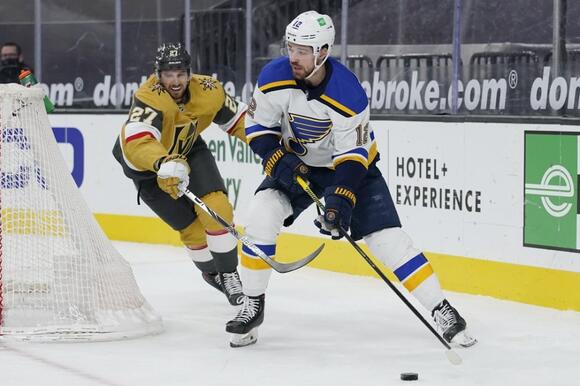 The St. Louis Blues dealt forward Zach Sanford to the Ottawa Senators on Saturday in exchange for forward Logan Brown and a conditional 2022 draft pick.

The conditional draft pick is removed if Brown plays more than 30 NHL games in 2021-22, according to the Blues. 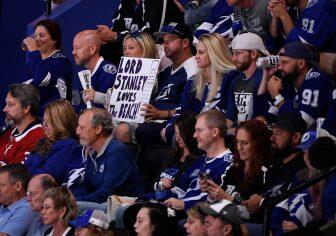 The 6-foot-6 Brown, 23, played in just one game for Ottawa last season and has one goal and eight assists in 30 career games since the Senators made him the 11th overall pick in the 2016 draft.

The St. Louis Blues (0-0-0) open the season on the road against the Colorado Avalanche (1-0-0) Saturday at Ball Arena in Denver. Puck drop is scheduled for 9 p.m. ET. Below, we look at the Blues vs. Avalanche odds and lines, and make our expert NHL picks, predictions and bets.
NHL・10 DAYS AGO
stlmag.com

For 19 seasons, Charles Glenn belted out a booming and familiar rendition of the Star Spangled Banner before St. Louis Blues games at Enterprise Center. But Glenn retired after the team’s 2019 Stanley Cup run, leaving the Blues one more roster change to wrestle with. Who could possibly replace the long-tenured tenor?
NHL・11 DAYS AGO
scoopswithdannymac.com

The Blues’ season is underway. A new hockey season. The Blues’ first game. And right out the chute, two goals for David Perron. But of course. Just put two more in his basket. Add it to his collection. Perron is one of the best goal scorers in the NHL, and yeah I can back that up with the numbers.
HOCKEY・8 DAYS AGO
Columbia Daily Herald

The St. Louis Blues (2-0-0) face the Vegas Golden Knights (1-1-0) Wednesday at T-Mobile Arena in Las Vegas. Puck drop is scheduled for 10 p.m. ET. Below, we look at the Blues vs. Golden Knights odds and lines, and make our expert NHL picks, predictions and bets. The Blues have...
NHL・6 DAYS AGO

It’s very rare in the world of sports to convince any fan that someone on their team did anything wrong. That’s why you know what St. Louis Blues forward Pavel Buchnevich did was egregious when many are on board with the outcome. The league’s Department of Player Safety announced Tuesday...
NHL・6 DAYS AGO
FanSided

The St. Louis Blues had a hot start and a poor finish in their season opener in Colorado. While they still wanted the same end result, it seemed as though they wanted to reverse how they obtained it. The first period for the Blues against the Arizona Coyotes was pretty...
NHL・7 DAYS AGO
Newsbug.info

David Perron scored a hat-trick as the Blues crushed the Los Angeles Kings 7-3 in their season home opener at Enterprise Center. Photo by Laurie Skrivan, lskrivan@post-dispatch.com.
NHL・2 DAYS AGO
Sportsnaut

Stan Bowman established himself in the hockey world when the Chicago Blackhawks won the Stanley Cup in 2010, his first season as general manager. That same year, Hawks upper management failed to act on a player’s sexual assault claim until after the championship was secured, according to a law firm’s independent review. The damning details in that report, released Tuesday, came at a high cost ...
NHL・8 HOURS AGO
sanjosehockeynow.com

Twitter has become the news outlet for insiders without a news outlet behind them. Former Hockey Night in Canada host Nick Kypreos, who now does a podcast for Sportsnet in Toronto, dropped a nugget about the NHL’s leanings toward embattled San Jose Sharks forward Evander Kane. Kane has been under...
NHL・14 DAYS AGO
97.1 The Ticket

The Red Wings will be improved this season. It is just a matter of how much. The biggest upgrade will come on the blueline. Nick Leddy is one of the NHL’s best puck movers, the ideal defensive pairing for high-end rookie Moritz Seider, Detroit’s rugged first-round draft pick in 2019.
NHL・13 DAYS AGO
97.1 The Ticket

Larkin was facing a suspension in a hearing with the NHL’s department of player safety – after which he was visiting a specialist for an unspecified injury.
NHL・11 DAYS AGO

The Ottawa Senators held strong in their ask of a long-term contract for Brady Tkachuk, and it appears as though it has paid off. Ottawa has signed their prized RFA to a seven-year, $57.5MM contract. That makes Tkachuk the highest-paid player on the Senators, just eclipsing the $8MM cap hit that Thomas Chabot carries. David Pagnotta of The Fourth Period reports that the deal includes a full no-movement clause in the final three years. The full breakdown is as follows:
NHL・12 DAYS AGO
FanSided

In terms of how long a professional hockey career can be, Jordan Binnington has been with the St. Louis Blues for a few cups of coffee. He arrived for good in January of 2019 and has not quite been here three years yet. Despite this relatively short amount of time,...
NHL・12 DAYS AGO
Herald & Review

VAIL, Colo. — Craig Berube spent much of the offseason thinking about it. Plus, an eight-game preseason to experiment with different combinations. So a lot of thought and evaluation has gone into the lines he’s expected to trot out Saturday against the Colorado Avalanche. On paper, it looks formidable:. Brandon...
NHL・12 DAYS AGO
Yardbarker

Ottawa Senators Prep For Their Season-Opener

Thursday evening the Ottawa Senators host their first regular season game in 588 days with fans. It’ll be the team’s first since March 5, 2020, a 5-2 win over the New York Islanders – a game which also featured the return of Jean-Gabriel Pageau who was dealt by the Senators just 10 days earlier.
NHL・12 DAYS AGO

It’s going to be a transition year for the Arizona Coyotes in the 2021-22 season. There’s practically no choice for it not to be after the offseason they had. Arizona lost both of its top goalies in Darcy Kuemper and Antti Raanta, defenseman and captain Oliver Ekman-Larsson, forward Conor Garland and top-four defensemen Niklas Hjalmarsson and Alex Goligoski.
NHL・13 DAYS AGO
Gazette

DENVER While the Colorado Avalanche’s stars of the past reconvened to share memories, several current ones missed a late rally and eventual 5-3 loss to the St. Louis Blues. A late and seemingly successful comeback was halted by an overturned goal with 2:49 left in the third period. Tyson Jost’s apparent tying goal was called back due to a kicking motion.
NHL・9 DAYS AGO