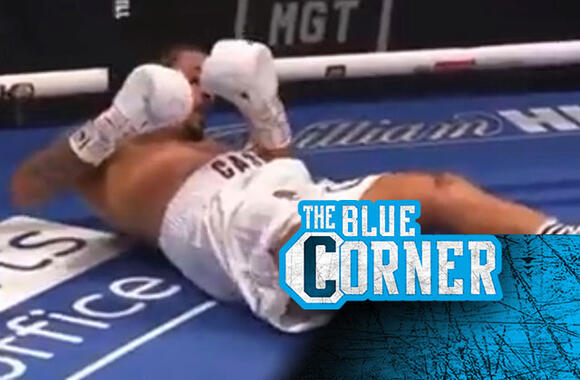 One of the most terrifying things that can happen in the ring (or the cage) is when a fighter loses complete control of their body because of a hit to the head. That’s what happened Saturday in the light heavyweight boxing match between Callum Smith and Lenin Castillo.

In the second round of their title fight, Callum connected on a vicious right hand, which caused Castillo to crash to the canvas. When he landed, Castillo’s body immediately seized, and his legs could be seen convulsing.

That’s one hell of a rebound win for Smith, who improves to 28-1. It was his first fight since his first career defeat last December when he lost a unanimous decision to Canelo Alvarez. As for Castillo, he falls to 21-4-1, but that’s got to be the least of his worried. Here’s hoping he recovers OK from that brutal knockout.

Callum vs. Castillo was part of Saturday’s DAZN card headlined by a heavyweight title fight between champion Anthony Joshua and Oleksandr Usyk at Tottenham Hotspur Stadium in London.

The Blue Corner is MMA Junkie’s blog space. We don’t take it overly serious, and neither should you. If you come complaining to us that something you read here is not hard-hitting news, expect to have the previous sentence repeated in ALL CAPS.

These fighters bodies are increasingly evolving but their heads and brains are remaining the same. This is a recipe for more traumatic brain injury and death.

Former WBA super-middleweight champion Callum Smith returned to the squared circle this afternoon for a bout with Lenin Castillo. Smith (28-1) was returning to action for the first time since suffering a unanimous decision loss to pound-for-pound boxing great Canelo Alvarez in December of 2020. Meanwhile, Lenin Castillo (8-1) was...
COMBAT SPORTS・29 DAYS AGO
SPORTbible

A video has surfaced from Saturday night's heavyweight classic between Tyson Fury and Deontay Wilder, which shows the devastating impact of the American's power punches. Fury was victorious in what was an 11 round war for the WBA heavyweight world championship belt, finally getting the better of his 35-year-old opponent with a clean right hand.
COMBAT SPORTS・13 DAYS AGO
MMAmania.com

Kickboxing icon Giorgio Petrosyan promised a highlight-reel knockout against Superbon at the ONE Championship “First Strike” event on Friday in Singapore, though I’m pretty sure this isn’t what “The Doctor” had in mind. Superbon stiffened Petrosyan with a second-round head kick to become the first-ever ONE Championship Featherweight Kickboxing World...
COMBAT SPORTS・9 DAYS AGO
CinemaBlend

Roman Reigns is set to defend his Universal Championship title against Finn Bálor at WWE’s Extreme Rules pay-per-view, and the fight is shaping up to be the champ’s greatest challenge in a while. Bálor has brought back his famous Demon persona, but will that be enough to topple Reigns’ tremendous run? It seems unlikely, and we say that due to a startling statistic that's been making the rounds as of late.
WWE・28 DAYS AGO

Tragic news ... MMA fighter, Justin Thornton, has died at 38 years old, just weeks after he was violently knocked out in an August fight. Thornton was seriously hurt after Dillon Cleckler KO'ed him during a Bare Knuckle Fighting Championship event on Aug. 20. The scene in the ring was...
COMBAT SPORTS・20 DAYS AGO
FanSided

Gervonta Davis and Rolando Romero both spoke boldly during a press conference Thursday to promote their Dec. 5 lightweight pay-per-view fight at Staples Center in Los Angeles. Romero predicted he would knockout out one of the sport’s rising stars. And Davis, while dismissing his opponent’s comments as empty blather, implied that he would end Romero’s night early.
COMBAT SPORTS・2 DAYS AGO
firstsportz.com

The season premiere of Friday Night SmackDown saw Roman Reigns open the show with his special counsel Paul Heyman and celebrate his victory against the Beast Incarnate Brock Lesnar at Crown Jewel 2021. But the Universal Champion also wanted to see if Lesnar could live up to his word. After...
WWE・1 DAY AGO

Brock Lesnar has spent his career dominating opponents, and he’s considered by many to be one of the most intimidating individuals on the planet. However, it seems that former WWE Intercontinental Champion Ryback isn’t intimidated by Brock as he recently posted the following tweet claiming that he could “manhandle” The Beast.
WWE・15 DAYS AGO
SPORTbible

Dana White has shared his thoughts on Conor McGregor leaking an official UFC document which revealed the huge pay-per-view buys for his rematch against Dustin Poirier. McGregor took to social media to share a UFC receipt, confirming the buy-rate for UFC 257 in January 2021. Per the image, McGregor vs....
UFC・18 DAYS AGO
boxingnewsandviews.com

Alexander Usyk of the Ukraine became boxing’s newest heavyweight champion last weekend with an emphatic display in the UK. A unanimous points decision over previous champion Anthony Joshua now sees Usyk and Tyson Fury hold all the heavyweight titles in boxing at this time. One former legend of the ring...
COMBAT SPORTS・25 DAYS AGO
Yardbarker

The former Heavyweight Champions Mike Tyson has responded to Deontay Wilder claiming that he would knock out Mike Tyson when he was in his prime. Deontay Wilder got knocked out by the Gypsy King in the early hours of Sunday morning UK time in Las Vegas. It was a cracking fight, but Tyson Fury showed his class and really does look like one of the best Heavyweights of all time.
COMBAT SPORTS・10 DAYS AGO

It has been a surreal few days in boxing after what can only be described as a fight for the ages in the heavyweight division. Tyson ‘Gypsy King’ Fury knocked out Deontay ‘Bronze Bomber’ Wilder in emphatic fashion last weekend in Las Vegas. Done so after getting decked a couple...
COMBAT SPORTS・11 DAYS AGO
MMAWeekly.com

Nate Diaz responds to Conor McGregor’s comment that his boxing is piss: ‘I turned you into a wrestler’

Nate Diaz handed Conor McGregor his first UFC loss at UFC 195 in March 2016 and the two have been feuding regularly for the last five years. McGregor defeated Diaz in their rematch by majority decision at UFC 202 in August of the same year, but the rivalry between the Irishman and Diaz still burns bright.
UFC・9 DAYS AGO
The Independent

Floyd Mayweather Jr has paid tribute to Deontay Wilder’s former trainer Mark Breland, who was sacked by the heavyweight following the second fight against Tyson Fury.A former welterweight world champion and Olympic champion, Breland was made the fall guy following Fury’s seventh-round knockout win over Wilder in 2020.The Bronze Bomber was furious at Breland for throwing in the towel to end the contest, though many leaped to the support of the 58-year-old for prioritising his fighter’s wellbeing.Mayweather wrote on Instagram: “Please hit the follow button if you want to follow a humble student, teacher, mentor, and coach in the sport...
COMBAT SPORTS・6 DAYS AGO
MiddleEasy

One of the most shocking results in combat sports occurred Friday in the kickboxing fight between Superbon and Giorgio Petrosyan. Superbon took on Petrosyan in a fight to determine ONE’s inaugural featherweight kickboxing champion at the ONE First Strike event which took place in Kallang, Singapore. And it was Superbon...
COMBAT SPORTS・8 DAYS AGO
New York Post

The Gypsy King’s endurance is like no other. After going 11 rounds with Deontay Wilder on Saturday – and winning by KO – Tyson Fury partied the night away with DJ Steve Aoki. He showed no signs of exhaustion while raging on stage at the Wet Republic pool party at...
COMBAT SPORTS・13 DAYS AGO
Daily Mail

REVEALED: Footage proves Deontay Wilder was at fault for referee Russell Mora's longer count on Tyson Fury after he was knocked down because the American was not in a neutral corner – despite MMA icon Daniel Cormier labelling it 'crazy slow'

Deontay Wilder will only have himself to blame for referee Russell Mora's long eight-count over Tyson Fury, when he failed to report to a neutral corner after flooring the Brit for a second time in the fourth round. The Gypsy King was sent crashing to the canvas on two separate...
COMBAT SPORTS・12 DAYS AGO
firstsportz.com

“I’ll give 3 million to Jon Jones if he can beat me in a MMA match or I’ll go back to jail,” Dillon Danis issues a fight challenge to Jon Jones

An American mixed martial arts fighter and a contender in the middleweight division at Bellator MMA and long-lasting training partner of Conor Mcgregor, Dillon Danis (2-0) has not fought in a long time. Many people believe this guy is just a laughing stock, but the “self-proclaimed best fighter on the planet” has called out almost every one in the community.
UFC・3 DAYS AGO
SPORTbible

Paris Fury has urged former WBC champion Deontay Wilder to walk away from boxing after his devastating defeat to Tyson Fury on Saturday. Wilder was unsuccessful in his bid to avenge his 2020 defeat to Fury and recapture the WBC title in Las Vegas. The 35-year-old KO artist came out...
COMBAT SPORTS・14 DAYS AGO