What Miami Dolphins fans can expect without starter Tua Tagovailoa

By Matthew Arrojas
Sportsnaut
26 days ago 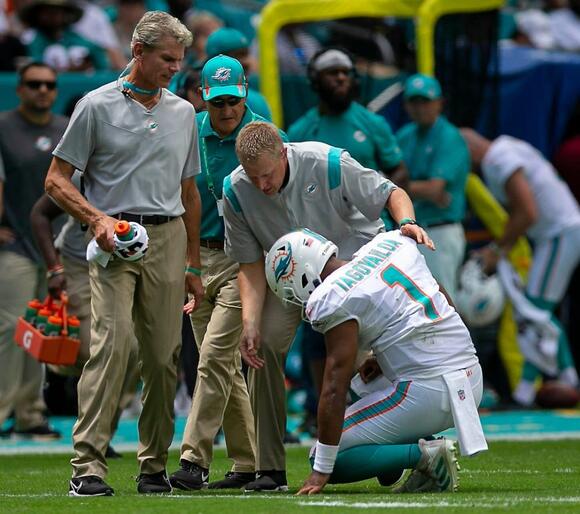 For many teams, an injury to their starting quarterback immediately spells a doomed season.

However, Miami Dolphins fans don’t yet know how much time quarterback Tua Tagovailoa will miss due to his fractured ribs. The injury will, at the very least, keep the second-year starter out of Sunday’s game against the Las Vegas Raiders , but it’s unclear how much of the 2021 season he’ll miss. In the interim, sixth-year veteran Jacoby Brissett will take the reins of the team and hope to keep its trajectory toward a playoff berth.

But what should Dolphins fans expect with Brissett behind the wheel? Let’s dig into what the team’s offensive plan may be.

With Brissett, Miami Dolphins have a steady if unexciting captain

Brissett has started a cumulative 32 games in the NFL, first playing for the New England Patriots in 2016 before being traded to the Indianapolis Colts the following year. That’s where he covered for Andrew Luck after injuries derailed the team’s season in 2017, forcing Brissett to start 15 games for the Colts. Luck’s retirement forced Brissett into the starting role again in 2019, where he started 15 games and led the team to a 7-8 record as a starter.

The following season, Brissett only attempted eight passes, so he’d seen fairly little action before signing with the Dolphins in the offseason to be Tagovailoa’s backup. 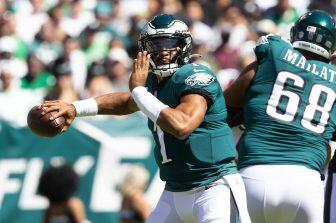 With Brissett, the front office likely saw the potential to add a veteran that can keep a steady course in a pinch. That’s precisely the situation he finds himself in now, and recent examples have shown he can do just that.

Forced into a starting role in 2019, Brissett buoyed the Colts.

He was, by most accounts, a middling quarterback that season. Per data from RBSDM , Brissett finished 15th in expected points added (EPA) per play among 34 quarterbacks that ran at least 200 plays that season. He ranked 27th, however, in completion percentage above expectation, meaning he’s not the kind of quarterback to consistently complete aggressive passes into tight windows.

This is all to say that Brissett’s most recent experience implies Dolphins fans can anticipate competent quarterback play for as long as he is under center. However, don’t expect him to elevate the offense beyond mediocrity.

Miami’s splash pick in the 2021 NFL Draft was wide receiver Jaylen Waddle , and the last thing the front office would want is for Tagovailoa’s injury to stunt any of his progression.

Waddle has already proven to be a focal point in the Miami Dolphins offense in his brief showing thus far. He has run the second-most routes on the team through two weeks behind only DeVante Parker, according to Pro Football Focus (PFF) . Miami’s quarterbacks have an average passer rating of 132.3 when targeting him, too, which is first on his team among all pass catchers.

It’s imperative that Waddle not take a back seat with Brissett starting for the foreseeable future.

That’s not to say the quarterback should force-feed him the ball, but to exclude Waddle from the game plan due to a lack of chemistry or incompatible skill sets would be a mistake for the team’s progress. Miami obviously believes Waddle can be a No. 1 wideout if management spent a top 10 pick on him, so those skills need to continue to be developed. 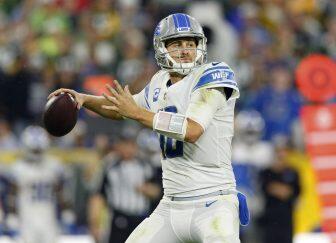 Miami’s coaching staff should encourage Brissett to push the ball farther downfield for the sake of its young pass catchers like Waddle and Will Fuller, who is expected to make his debut for the team against the Raiders .

To say that Miami’s offensive line has been a weakness would be an understatement.

The Miami Dolphins are one of only four teams that have two offensive tackles who have given up seven or more pressures through the first two weeks. One of those tackles was Austin Jackson, who didn’t even play in Week 1. The Dolphins’ offensive line has been the worst-graded pass blocking unit in the league thus far, per PFF .

As is the case when most starting quarterbacks go down to injury, expect the team to lean on its run game more for the next few weeks.

In this area, the Dolphins’ offensive line has been slightly more respectable. The team ranks 28th in Football Outsiders’ adjusted line yards metric, a way to measure a line’s ability to create space for its running backs. While that ranking isn’t anything to write home about, it’s worth noting there’s a steep drop off after the Dolphins.

Related: NFL Power Rankings – Packers back in the top 10 heading into Week 3

Expect featured running back Myles Gaskin to get heavy usage while Tagovailoa is out, and for the line’s run blocking to be put to the test. An increased focus on the run game could help take some weight off of the struggling line, as it’s generally easier for most blockers to push forward in the run game than it is to shuffle backward while pass blocking.

Cris Carter on Tua Tagovailoa: 'He can't be my quarterback moving forward'

The assessment of a quarterback who is a former first-round draft pick is always an interesting discussion. There are going to be those who say they need more time or more pieces around them, and there will be those who give up after a few games. In the case of...
NFL・2 DAYS AGO
987theshark.com

Bruce Arians Says Running Back is on Thin Ice

Bruce Arians is not happy with Runnin Back Gio Bernard after the Bucs defeat of Miami last Sunday. Arians was happy with Bernards’s total scoring but his pass defense was not up to standards. “I was pleased with it at the end, I didn’t like when he got run over...
NFL・3 DAYS AGO
thecomeback.com

The Miami Dolphins will have a new starting quarterback this Sunday

While the second-year quarterback got good news when initial x-rays were negative, word came down on Wednesday that Tua’s ribs were indeed fractured after further testing. That means Tagovailoa will miss this weekend’s game against the Las Vegas Raiders. “We decided to run some more tests, we ran them, and...
NFL・29 DAYS AGO
247Sports

The Miami Dolphins placed quarterback Tua Tagovailoa on injured reserve last month with a rib injury. The team reportedly envisioned the Oct. 17 game against the Jacksonville Jaguars in London, and head coach Brian Flores said Monday he hopes that is the case. “What we need to see is to...
NFL・10 DAYS AGO

In an attempt to bolster their anemic offense, the Chicago Bears got Justin Fields and the team’s attack some help by trading for Miami Dolphins wide receiver Jakeem Grant. This, according to Tom Pelissero of The NFL Network. The move comes shortly after the Bears scored a 24-14 win over...
NFL・16 DAYS AGO
FOX Sports Radio

Why Tua Tagovailoa is Officially Out of Time in Miami

Colin Cowherd and Joy Taylor discussed the swirling trade rumors around estranged Houston Texans quarterback Deshaun Watson being a target for the Miami Dolphins, as Tua Tagovailoa’s standing with the franchise appears to be deteriorating rapidly.
NFL・9 HOURS AGO
South Florida Sun Sentinel

The Miami Dolphins brought back a familiar face at linebacker but cut ties with an NFL fan favorite in the process. The Dolphins released linebacker Shaquem Griffin, a player beloved by football fans for his story of overcoming his amputated left hand to become a college football star at Central Florida and then reach the NFL, from their practice squad to make room to sign Vince Biegel. Biegel ...
NFL・2 DAYS AGO
The Spun

Seemingly out of nowhere on Wednesday afternoon, trade rumors surrounding Miami Dolphins quarterback Tua Tagovailoa began to swirl. Multiple sources reported that the Dolphins and the Houston Texans are nearing a deal that would send Deshaun Watson to Miami. Others reported that it could be a three-team deal that would see Tagovailoa land in either Denver or Washington..
NFL・1 DAY AGO

Broncos Are Rumored To Be In Quarterback Trade Mix

Houston Texans quarterback Deshaun Watson remains with the AFC South organization as it stands today, but the troubled signal-caller could soon be on the move. With the Miami Dolphins long being linked to Watson, who is still facing some very serious sexual assault allegations and presumably more than a few legal battles ahead, the Texans have continually tried to distance themselves from the former first round NFL Draft pick. In addition to the Dolphins, there is apparently at least one other team that has at least checked in on Watson and his availability via trade.
NFL・16 DAYS AGO
The Spun

The 2021 NFL trade deadline is drawing near, which means it’s the perfect time for those Deshaun Watson trade rumors to pop back up. Each and every month it seems a new team is in the mix to trade for the Houston Texans quarterback. The Miami Dolphins have been the team most connected to Watson over those months.
NFL・1 DAY AGO
profootballnetwork.com

We’re barely two years removed from the #TankForTua movement, and already, another member of Tua’s family is nearing the NFL stage. Maryland QB Taulia Tagovailoa is too busy racking up stats to worry about the NFL Draft. But soon, it may be the next step for the rising quarterback. The...
NFL・12 DAYS AGO

The Washington Football Team is not expected to make a move for Miami Dolphins quarterback Tua Tagovailoa, a source close to the situation told NBC Sports Washington's JP Finlay. "It's all bs," Finlay was told. Ben Standig of The Athletic and Sam Fortier of the Washington Post were first to...
NFL・1 DAY AGO
Dolphin Nation

The NFL trade deadline is coming up soon, which means teams around the league will have to decide whether to buy or sell. One NFL executive thinks the Green Bay Packers should trade for Miami Dolphins star cornerback Xavien Howard. “Xavien is a guy I’d trade for if I’m Green...
NFL・3 DAYS AGO
FanSided

The Deshaun Watson trade rumors are heating up, resulting in speculation of Tua Tagovailoa’s future landing spot. There is no doubt that conversations concerning the availability and trade of Deshaun Watson have been happening inside the NFL every day since early 2021. However, according to multiple reports, those conversations are...
NFL・1 DAY AGO
ClutchPoints

Prepare yourself for the rare NFL midseason blockbuster. According to reports, the Miami Dolphins, Houston Texans, and Washington Football Team are closing in on a three-team exchange that would send embattled QB Deshaun Watson to Miami and QB Tua Tagovailoa to Washington. Rumors of a Watson-to-Miami trade have been swirling...
NFL・1 DAY AGO

Carson Wentz does not have a fan in NFL analyst Rodney Harrison. The former All-Pro defensive back, now working for NBC Sports, did not beat around the bush when analyzing the Indianapolis Colts quarterback with colleague Jac Collinsworth on Tuesday. Per WIP:. “Frank Reich, it seems like he’s totally changed...
NFL・21 DAYS AGO
FOX Sports Radio

The Miami Dolphins are reportedly considering a possible trade for disgruntled Houston Texans quarterback Deshaun Watson, which means Tua Tagovailoa’s time in Miami could be coming to an end. Armando Salguero of OutKick mentioned that trade talks between the Texans and Dolphins have increased recently, with the Dolphins possibly dealing...
NFL・1 DAY AGO
AL.com

Dolphins hoping to have Tua Tagovailoa back on Sunday

The Miami Dolphins hope to have Tua Tagovailoa back at quarterback when they play the Jacksonville Jaguars on Sunday in London. The former Alabama All-American sustained fractured ribs when Buffalo defensive end AJ Epenesa slammed Tagovailoa down as he threw a pass on the Dolphins’ ninth snap against the Bills on Sept. 19.
NFL・10 DAYS AGO