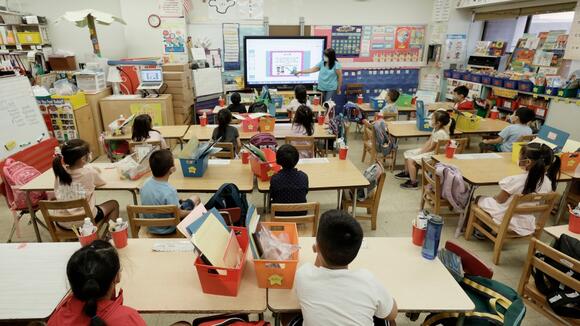 NEW YORK (CBSNewYork) — Monday was supposed to be the deadline for New York City school employees to get vaccinated, but that’s not the case anymore after a judge temporarily blocked the mandate.

The Department of Education’s vaccine mandate is now in limbo, just days before it was supposed to take effect.

Come Monday, all teachers and DOE employees were required to have received at least one dose of the COVID vaccine or they’d lose their jobs, but Friday night, that all changed when a federal court of appeals judge granted a temporary injunction against the mandate.

The new case was filed by a group of teachers and is at least the second lawsuit against the city’s order.

It also overrules a previous decision by a judge last week that lifted a temporary pause on the mandate.

Saturday, the city reacted to the injunction.

The DOE released a statement, saying in part, “We’re confident our vaccine mandate will continue to be upheld once all the facts have been presented, because that is the level of protection our students and staff deserve.”

A spokesperson added late Saturday the department is up about 5,000 new vaccinations since Friday. Currently, at least 85% of all employees have had the shot.

Meanwhile, the unions for New York City principals and teachers are also reacting.

Saturday, the Council of School Supervisors and Administrators said it was monitoring the court’s review of the case.

The United Federation of Teachers released the following statement:

“While we still await a ruling in a separate state court review of the city’s vaccine mandate, the federal court ruling gives the Mayor and city Department of Education more time to put together a real plan for dealing with the expected staff vacancies the mandate would create. We hope they take advantage of this opportunity.”

The unions have previously said while they encourage vaccinations, they should not be a condition of employment.

The groups warned that if the mandate went through as is, it could leave the school system short of as many as 10,000 teachers and other workers.

The mayor says if that were to happen, the city has thousands of replacement teachers ready to step in.

As for this temporary injunction, it will be reviewed by a panel of three judges on Wednesday.

The lawyer representing the teachers in the lawsuit is also reacting, saying in part, “Their concern for the safety and long term consequences of this new vaccine is valid and sincere. Nobody’s livelihood should be jeopardized in this manner by government.”

The current supply chain crisis might jeopardize President Joe Biden's goal to vaccinate the whole country after a major distribution executive urged him to postpone the government regulations due to persistent supply chain concerns. CEO of the National Association of Wholesaler-Distributors Asked Biden To Postpone Vaccine Mandate. In a recently...
PHARMACEUTICALS・1 DAY AGO
Connecticut Mirror

Another 25 workers are on unpaid leave.
HARTFORD, CT・2 DAYS AGO
abc17news.com

A federal judge has temporarily allowed health care workers in New York to apply for religious exemptions to the state’s Covid-19 vaccine mandate, according to an order. US District Judge David Hurd made the ruling on Tuesday, granting a preliminary injunction that allows health care workers to apply for religious exemptions considered by their employers.
NEW YORK CITY, NY・12 DAYS AGO
cbslocal.com

NEW YORK (CBSNewYork) – A federal judge has granted a preliminary injunction against New York state’s vaccine mandate for health care workers. The ruling sides with health care workers, and effectively protects the jobs of those who objected to the mandate on religious grounds. The Jobs Are Out There: Big...
NEW YORK CITY, NY・12 DAYS AGO

CHICAGO (CBS) — The city of Chicago is facing yet another lawsuit over its COVID-19 vaccination mandate for city workers, as dozens of firefighters and water department workers are asking a federal judge to block the mandate. The lawsuit, filed in federal court on Thursday by attorney Jonathan Lubin, seeks to prevent the city from requiring workers to disclose their vaccination status or be disciplined for not being vaccinated. The lawsuit states that the plaintiffs could lose their jobs over their “deeply held beliefs that they should not take the COVID-19 vaccine.” The city’s policy required all city employees to report their vaccination...
CHICAGO, IL・2 DAYS AGO
News 12

The decision was not made without pushback. Teachers and those contracted by the Department of Education have been protesting the orders since August.
NEW YORK CITY, NY・6 DAYS AGO
FingerLakes1.com

A federal judge has issued a temporary restraining order against a non-profit laboratory in Tennessee and placing workers on unpaid leave that received exemptions for the COVID-19 vaccine. The workers claimed that the unpaid leave was indefinite but the employer said the leave was 60 days with no loss of...
CONGRESS & COURTS・6 DAYS AGO
Newsday

All municipal workers, including cops and firefighters, must be vaccinated against COVID-19 or be placed on unpaid leave, New York City Mayor Bill de Blasio announced Wednesday morning. A mandate is already in place for tens of thousands of the city's 350,000 or so municipal workers, such as teachers and...
NEW YORK CITY, NY・4 DAYS AGO

NEW YORK (CBSNewYork) — A judge decided Thursday to temporarily stop the city’s plan to change the health insurance for more than 250,000 New York City retirees. Retired workers would be switched to the Medicare Advantage Plus, or they can opt out by Oct. 31 to keep their current insurance – but it would cost $200 more a month. The judge called the rollout of the new plan “irrational.” The city will now have to present a new plan. “While we are gratified that the court upheld the contract award which is an essential step towards implementing the program, we are disappointed that the court stayed its implementation. We are reviewing the decision and the City’s options for moving forward.  We are confident that the program will ultimately be implemented in the best interest of city retirees,” a city Law Department spokesperson said.
NEW YORK CITY, NY・2 DAYS AGO
Fox News

Former Education Secretary on politicization of schools: Parents should yield to their own 'common sense'

Former Secretary of Education Bill Bennett advised parents to stop yielding to "experts" and start yielding to their own "common sense" amid the rampant politicization of schools. Bennett appeared on "Fox & Friends" Sunday to discuss the matter, saying parents are the "first line of defense" for their children. CONCERNED...
EDUCATION・16 HOURS AGO
Bangor Daily News

A Maine judge is the latest jurist to reject efforts to keep the state’s vaccine mandate for health care workers from being enforced in the coming days. Superior Court Justice Michaela Murphy on Friday said what federal judges have said so far in refusing to halt enforcement of the mandate — that those attempting to stop the rule have not proven that they would ultimately prevail on the merits of the case. She also said the mandate and the way it was implemented did not violate Maine law or the U.S. Constitution.
HEALTH・2 DAYS AGO
Matt Lillywhite

Flu Vaccine Mandates Are Being Enforced Around The United States

According to The Washington Post, "a number of major universities are going beyond their usual autumn flu vaccine pushes — and enacting mandates." This is allegedly happening around the United States - even in states where vaccine mandates have been the subject of recent controversy (such as Florida).
16 HOURS AGO

New York City’s vaccine mandate, which required anyone who works in a public school or a community-based center contracted by the Department of Education (DOE) to have gotten at least one shot of the COVID-19 vaccine in order to continue working, finally went into effect on Monday, October 4, 2021.
NEW YORK CITY, NY・13 DAYS AGO
US News and World Report

Attorneys for Montgomery County Public Schools in Maryland are asking a federal judge to toss out the lawsuit filed by an employee who objects to its vaccine mandate on religious grounds. In court documents, the school system asked for dismissal of the lawsuit by the plaintiff identified only as “John...
MONTGOMERY COUNTY, MD・12 DAYS AGO
Boston 25 News WFXT

WORCESTER, Mass. — A federal judge on Friday afternoon denied a request to block Gov. Charlie Baker from enforcing his COVID-19 vaccine mandate for executive branch employees. Now, correction officers in Massachusetts will be required to get the COVID vaccine, or face the loss of their jobs. The union representing...
MASSACHUSETTS STATE・9 DAYS AGO
NEWS10 ABC

ALBANY, N.Y. (NEWS10) — This week on Empire State Weekly, we dive into the legalities of workplace religious exemptions after a federal judge granted an injunction to plaintiffs suing over New York State’s vaccine mandate for health care workers. Federal judge David Hurd from Utica ruled, “The department of health is barred from taking any […]
ALBANY, NY・9 DAYS AGO
ifiberone.com

NYC to impose vaccine mandate for all city workers, including police

New York City is expanding a vaccine mandate to cover all city workers, including police officers and firefighters, Mayor Bill de Blasio (D) has announced. De Blasio said Wednesday the city will require all city workers to receive at least one COVID-19 vaccine dose by the end of this month, The New York Times reports. Those who aren't vaccinated by Nov. 1 will be required to go on unpaid leave. City employees were previously required to get vaccinated or undergo weekly testing, and a vaccine requirement was also put in place in the city for Department of Education workers.
NEW YORK CITY, NY・4 DAYS AGO