By Rick Porter
The Hollywood Reporter
20 days ago 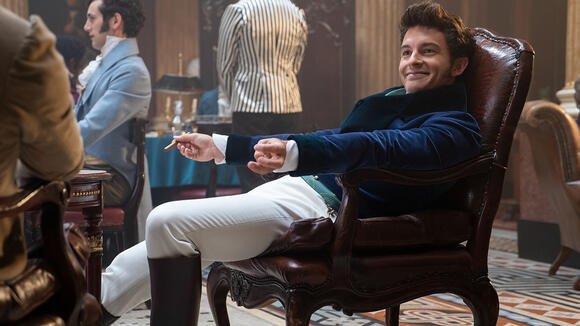 Bridgerton is focusing on a new relationship in its second season, but the intrigue and drama surrounding its characters look to be unchanged.

Netflix on Saturday released a first look at season two of its breakout hit set in Regency-era London. The Shondaland series is currently in production.

The teaser revealed a testy meeting between Anthony Bridgerton (Jonathan Bailey) and Kate Sharma ( Simone Ashley ), which likely will give way to much more romantic encounters later in the season.

Season two of Bridgerton is based on Julia Quinn’s novel The Viscount Who Loved Me , the second in Quinn’s best-selling Bridgerton series. It will focus on Anthony as he searches for a bride and comes across Kate, a smart and headstrong young woman who suffers no fools — including Anthony.

Sharma and Bailey, in a conversation with co-stars Nicola Coughlan (Penelope Featherington) and Charithra Chandran (Kate’s sister Edwina Sharma), promised “a lot of arguing” and “volatility” in Kate and Anthony’s relationship — which is borne out in clip Netflix released.

Other additions to the cast for the coming sesaon are Shelley Conn, Calam Lynch, Rupert Young and Rupert Evans , who will play Edmund, the Bridgerton patriarch.

Not returning is season one breakout Regé-Jean Page, who played Simon Basset, the Duke of Hastings. The series’ plan is to focus on one of the eight Bridgerton siblings in each season, mirroring the format of Quinn’s novels. With Bailey’s Anthony the focus of season two, Page’s character is no longer central to the story. Sources told The Hollywood Reporter that Page was offered a guest role in season two but declined.

Watch the clip below.’

Fox is developing the animated comedy “Dirt Girls,” Variety has learned. The series hails from Victoria Vincent, who will serve as writer and executive producer. Fox’s Bento Box Entertainment will provide the animation. The project came through Vincent’s participation in Bento Box’s SkunkWorks program, which is designed to discover, cultivate and develop new creators and voices. The series takes place in an alienated suburban neighborhood, where two unsupervised kid sisters, Lucy and Pia, find depraved ways to keep themselves entertained while dealing with the confusing, dark aspects of the encroaching adult world. Vincent most recently worked as director on the Netflix animated series “We...
TV SERIES・2 DAYS AGO
homenewshere.com

HBO is giving viewers their first look at the second season of its hit comedy The Righteous Gemstones. Along with unveiling some new images featuring series stars Danny McBride, John Goodman, Adam Devine, Edi Patterson, and Cassidy Freeman among others, HBO is also teasing when the show will make its return. Season 2 of The Righteous Gemstones will officially debut on HBO and stream on HBO Max sometime this winter, which means it could arrive at the end of this year or early in 2022.
TV SERIES・14 DAYS AGO
celebratingthesoaps.com

Animaniacs is coming back for a second season and Hulu has released a first looks clip that I think a lot of you are going to get a kick out of. The clip is inspired by the opening sequence of the classic ‘80s cartoon series Thundercats. It features a muscular Yakko, a hotdog Nunchuk-wielding Wakko, and a flower-whipping Dot in action as a parody song titled “80s Cats”plays.
TV SERIES・4 DAYS AGO
flyernews.com

Actors Phoebe Dynevor and Regé-Jean Page in their hit show “Bridgerton.” Courtesy of NYTimes.com. Anyone who has had a Netflix account and loads of time on their hands (which lets face it, is most of the world) has heard of Bridgerton. It quickly became Netflix’s biggest hit, with nearly 82 million households watching it within the first month of its release in 2020. This steamy regency era love story has stolen the hearts and minds of nearly everyone who has watched it.
TV SERIES・2 DAYS AGO
digitalspy.com

Power Book II: Ghost is returning for its second season in just over a month, so now seems like as good a time as any to drop the trailer for the new episodes. "Time to deal with the consequences," the show's official social media shared. The second run of the...
TV SERIES・1 DAY AGO
The Hollywood Reporter

Netflix is ready to talk books over coffee. The streamer announced Wednesday that they will launch Netflix Book Club, a book club where readers will hear about new books, films and series adaptations, as well as have exclusive access to each book’s adaptation process. Netflix will partner with Starbucks to bring the book club to life via a social series called But Have You Read the Book?  Uzo Aduba will serve as the inaugural host of the series and announce monthly book selections set to be adapted by the streamer. Aduba will also speak with the cast, creators and authors about the...
BOOKS & LITERATURE・2 DAYS AGO

After checking out of The White Lotus‘ Hawaii resort, Jennifer Coolidge looks set to return for the HBO dramedy’s second season. Although the network has yet to announce the casting news, multiple sources have confirmed the actress will be back, according to TV Line. Coolidge earned multiple accolades and Emmy...
TV SERIES・18 HOURS AGO
The Hollywood Reporter

Studiocanal and The Picture Company, which previously teamed up for Netflix action movie Gunpowder Milkshake, have found their next action-thriller project. The two production entities have preemptively picked up Eurostar, a high-concept pitch from Ben Ripley, the scribe behind the Jake Gyllenhaal hit Source Code. Details are being kept in the caboose, but the story is a ticking clock thriller set aboard the famous Eurostar train line that runs underneath the English Channel, also known as the Chunnel, from London to Paris. As befitting the man who wrote Source Code, there is even a sci-fi hook. The project has been described as tonally...
MOVIES・2 DAYS AGO
TVLine

After a deadly start in Volume 1, Money Heist is upping the ante in the first teaser for the series’ dramatic conclusion. Premiering Friday, Dec. 3 with its final five episodes, Volume 2 marks the end of the heist. But before the action wraps up, the Professor will snap out of his grief-stricken stupor and come up with a plan to save the rest of the Bella Ciao bandits. “In the last few hours, I’ve lost people very dear to me,” the Professor intones in the super-amped clip. “And I won’t let anyone else fall because of this heist.” The teaser also...
TV SERIES・2 DAYS AGO
Variety

SPOILER ALERT: Do not read if you have not watched the third season of “You,” streaming now on Netflix. If you thought Joe Goldberg (Penn Badgley) would fall in love with a woman who was an perfect match for him in terms of how far she’d go for what she loved, marry her, have a baby with her and live some version of happily ever after — even one in which they begin to kill together — well, then you haven’t really been paying attention to Netflix’s “You.” The second season of the dramatic thriller based on Caroline Kepnes’ “You” and “Hidden...
TV SERIES・11 HOURS AGO

Kevin Bacon is stepping back into the horror genre after signing up for a new Blumhouse project to be directed by three time Oscar nominee John Logan. Kevin Bacon, who appeared in the original Friday The 13th, Hollow Man and You Should Have Left, will also executively produce the movie along with Scott Turner Schofield. The film is described as a tale of LGBTQIA+ empowerment which takes place in a gay conversion camp, and was written by Logan, who will be making his directorial debut on the feature. Currently, Theo Germaine is the only other star known to be cast in the untitled project.
MOVIES・21 DAYS AGO
The Hollywood Reporter

Alan Ruck has a love-hate relationship with Ferris Bueller’s Day Off — which, for many years, was far more the latter emotion. A guest Thursday on the WTF With Marc Maron podcast, the Succession star talked about his tumultuous career before nabbing a series of solid projects, including Speed and Spin City. Before he landed the role of Connor Roy on the award-winning HBO hit series, Ruck was best known for playing lovable goof Cameron Frye in the 1986 classic Ferris Bueller’s Day Off. As much as he loved the role and making the John Hughes film with his real-life pal and star...
LOS ANGELES, CA・1 DAY AGO
Variety

“You” is getting a fourth season on Netflix. The renewal comes ahead of the Oct. 15 debut of “You” Season 3 on the streamer. The series is based on the books “You” and “Hidden Bodies” by Caroline Kepnes. It was developed by Greg Berlanti and Sera Gamble. Both serve as executive producers with Gamble also serving as showrunner. Sarah Schechter, Leslie Morgenstein, David Madden, Gina Girolamo, John Scott, Neil Reynolds, Michael Foley, and Justin Lo also serve as executive producers. Berlanti Productions and Alloy Entertainment produce in association with Warner Bros. Television. “Reading Caroline’s novel, Greg and I were instantly obsessed with...
TV SERIES・2 DAYS AGO
EW.com

Dancing With the Stars recap: Look who earned the first 9s of the season

Hey, it's the Happiest Place on Earth! That's what happens when it's Disney Heroes night on Dancing With the Stars: everyone gets a pass to hang out mask-free with Mickey and Minnie in front of Cinderella's castle. And speaking of delightful surprises, check out Tyra Banks and her best dress yet — a chocolate and vanilla-swirled confection that didn't give me a sugar rush.
TV SHOWS・4 DAYS AGO
TVLine

Tom Clancy’s Jack Ryan doesn’t have a Season 3 premiere date yet, but he’s already planning his next mission: Amazon Prime has renewed the John Krasinski-starring thriller for Season 4, our sister site Variety reports. Additionally, Michael Peña (Narcos: Mexico) has boarded the series in an undisclosed role. In the third season — which recently wrapped production — “Jack is on the run and in a race against time,” per Variety. “He is wrongly implicated in a larger conspiracy and suddenly finds himself a fugitive out in the cold. Now, wanted by both the CIA and an international rogue faction that...
TV & VIDEOS・1 DAY AGO
EW.com

The Blacklist is entering a new era, and we finally have a look at its ninth season. The NBC show is jumping forward two years, revealing that the lives of Elizabeth Keen's (Megan Boone) unconventional chosen family are very different after her season 8 exit. Raymond "Red" Reddington's (James Spader) whereabouts are unknown, and the FBI task force has disbanded, its members scattering.
TV SERIES・3 DAYS AGO
showbizjunkies.com

HBO Max’s What Happened, Brittany Murphy? examines the career, private life, and death of the actress who died under bizarre circumstances at 32. The official trailer shows a smiling Murphy at the height of her career as well as in the more troubled period just prior to her death. Brittany...
MOVIES・8 DAYS AGO