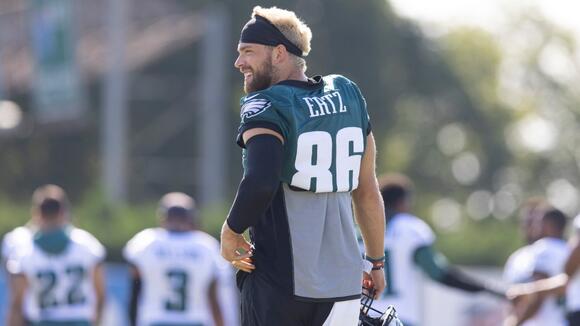 PHILADELPHIA (CBS) — The Eagles announced some big news Saturday that could give their offense a boost in Week 3. Tight end Zach Ertz, who should be available to play, has been activated off the COVID-19 reserve list ahead of the Eagles’ matchup against the Dallas Cowboys on Monday Night Football.

Ertz was placed on the list on Monday after testing positive for COVID, but he was able to rejoin the active roster. Due to being fully vaccinated, he needed to have two negative PCR tests 24 hours apart and 48 hours with no symptoms to return to the team.

Ertz was dealing with a hamstring injury in the Eagles’ 17-11 home opener loss to the San Francisco 49ers, but he still played one snap less than fellow tight end Dallas Goedert. Ertz had one catch for six yards in the contest.

Neal has nine total tackles and one tackle for loss for the Cowboys this season.

The Eagles will hope to win their first away game in AT&T Stadium since 2017 and get an early edge in the hunt for the NFC East division title in Week 3.

Thus far, the first three games of his sophomore campaign has been up and down for Philadelphia Eagles quarterback Jalen
NFL・14 DAYS AGO
NBC Sports

Ex-Eagles coach details who Ertz was nearly traded for

The Patriots traded Stephon Gilmore to the Panthers on Wednesday, letting the 31-year-old Pro Bowl-caliber cornerback go as he continues to rehab a quad injury that has limited him to start the season. Gilmore won't be able to face the Eagles in Week 5 as he remains on the PUP list.
NFL・9 DAYS AGO
6abc Action News

The Eagles have traded Zach Ertz to the Arizona Cardinals in exchange for cornerback Tay Gowan and a 2022 fifth round draft pick.
NFL・5 HOURS AGO
phillysportsnetwork.com

The Philadelphia Eagles suffered a disappointing loss in week 2, falling to the San Francisco 49ers despite plenty of chances to turn things around and secure the win. This leaves the team with a 1-1 record heading into their first prime time game of the season and it just so happens to be against their fiercest rival – the Dallas Cowboys.
NFL・22 DAYS AGO

With the game in the balance, momentum strongly on the side of the home team, a massive upset just around the corner, and a big play being made, it's every NFL fan's worst nightmare that such a picturesque scenario could be derailed by the referees. And when it's not a pass interference, or facemask, or unnecessary roughness — or any other flag that has a tangible effect on how the game is played — but a taunting penalty that is the impetus for such a momentum-crushing blow, that nightmare becomes even worse.
NFL・10 HOURS AGO
FanSided

Longtime Eagles tight end Zach Ertz will be in Philadelphia no longer. The Eagles traded Ertz to the Cardinals today in exchange for cornerback Tay Gowan and a 2022 fifth-round draft pick, according to Adam Schefter of ESPN. Although Ertz was known to want a new contract, the report says...
NFL・7 HOURS AGO
The Spun

Earlier this week, the Philadelphia Eagles made a surprising decision regarding one of the team’s wide receivers. Following the team’s win over the Carolina Panthers this weekend, the Eagles released wide receiver Travis Fulgham. The move comes a year to the day after Fulgham had a breakout game against the Pittsburgh Steelers.
NFL・3 DAYS AGO

Latest on Lane Johnson’s absence from the Eagles

Eagles right tackle Lane Johnson was not back at the NovaCare Complex on Wednesday as the team prepared for their game this Sunday against the Carolina Panthers. “He is not here today, still dealing with a personal matter,” head coach Nick Sirianni said. “Really to go any more into that…I am still going to respect his privacy. But he is not here today.”
NFL・9 DAYS AGO
USA TODAY

The Buccaneers' defensive back situation got more precarious when Richard Sherman was ruled out of Thursday night's game against the Eagles.
NFL・21 HOURS AGO
USA TODAY Sports Media Group

The Buffalo Bills seemed unlikely to trade for tight end Zach Ertz, especially so considering the way Dawson Knox has played through five games this season. Now he 100 percent is not coming to Buffalo. On Friday, the Philadelphia Eagles traded Ertz to the Arizona Cardinals. In exchange for Ertz,...
NFL・7 HOURS AGO
Pro Football Rumors

Despite Ertz being the one viewed as on the way out all year, the Vikings proceeded to contact the Eagles on Goedert’s potential availability, Jeremy Fowler of ESPN.com notes (ESPN+ link). This inquiry came following the news Irv Smith Jr. would be out for the season. Smith’s injury altered the...
NFL・1 DAY AGO

Report: Lane Johnson returns to Eagles after time away for “personal matter” [UPDATE]

UPDATE: John Clark updated his report to say that Lane Johnson will be returning to Philly at some point today. Nick Sirianni said that Johnson is not yet at the facility. Sirianni wouldn’t say if Johnson will definitely be available to play against the Panthers. ORIGINAL STORY BELOW. Eagles starting...
NFL・9 DAYS AGO
ClutchPoints

The Philadelphia Eagles made waves when they traded tight end Zach Ertz to the Arizona Cardinals on Friday. All offseason, rumors swirled that Ertz would be moved elsewhere, but it never came to fruition until the conclusion of his Week 6 contest with Philly. Ertz seemed to know a move...
NFL・5 HOURS AGO
Sportsnaut

PHILADELPHIA – Zach Ertz came off the field following Thursday night’s 28-22 loss to the Tampa Bay Buccaneers close to tears. He and teammate Javon Hargrave walked down the tunnel leading from the field to the locker room unable to control his emotions. Before entering the locker room, he held his hand to the head of Eagles security Dom DiSandro.
NFL・16 HOURS AGO
FOX43.com

PHILADELPHIA — It has been a confusing 2021 for Philadelphia Eagles tight end Zach Ertz. At the end of the 2020 season, it felt like his run (like many other veteran pieces) with the Eagles had finally come to an end. Ertz wanted a new contract, and the organization wanted...
NFL・8 DAYS AGO
NBC Philadelphia

Two AFC teams reportedly interested in Ertz deadline deal originally appeared on NBC Sports Philadelphia. Stop us if you've heard this one before: the Eagles have two starting-caliber tight ends, and they're thinking about trading one before this year's deadline. Sound familiar? As in, didn't we just do this last...
NFL・3 DAYS AGO
Yardbarker

Ertz, 30, had four catches and a touchdown in Thursday night’s 29-22 loss to the Tampa Bay Buccaneers. He has 18 catches for 189 yards and two scores on the season. Dallas Goedert, whose emergence had made Ertz expendable to the Eagles, has 15 catches for 216 yards and two touchdowns this year.
NFL・7 HOURS AGO
CBS Sports

Ertz caught six of eight targets for 60 yards in Sunday's 42-30 loss to the Chiefs. For the second-straight week, Ertz finished in at least a tie for second in every receiving category and has firmly re-established himself in the Philadelphia offense after a slow first two weeks. He played only 35 snaps to Dallas Goedert's 52, and while Goedert got the touchdown, it was his only red-zone target compared to three for the 30-year-old Ertz on the day. Sharing key tight end duties still caps each one's upside, but both have managed to be productive so far.
NFL・10 DAYS AGO