By Associated Press
KTLA
27 days ago 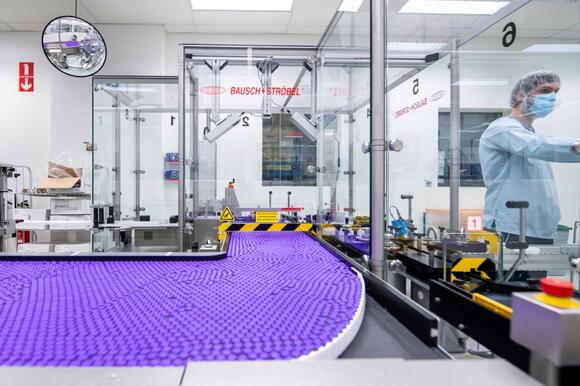 Billions more in profits are at stake for some vaccine makers as the U.S. moves toward dispensing COVID-19 booster shots to shore up Americans’ protection against the virus.

How much the manufacturers stand to gain depends on how big the rollout proves to be.

U.S. health officials late on Thursday endorsed booster shots of the Pfizer vaccine for all Americans 65 and older — along with tens of millions of younger people who are at higher risk from the coronavirus because of health conditions or their jobs.

Officials described the move as a first step. Boosters will likely be offered even more broadly in the coming weeks or months, including boosters of vaccines made by Moderna and Johnson & Johnson. That, plus continued growth in initial vaccinations, could mean a huge gain in sales and profits for Pfizer and Moderna in particular.

“The opportunity quite frankly is reflective of the billions of people around the world who would need a vaccination and a boost,” Jefferies analyst Michael Yee said.

Wall Street is taking notice. The average forecast among analysts for Moderna’s 2022 revenue has jumped 35% since President Joe Biden laid out his booster plan in mid-August.

Most of the vaccinations so far in the U.S. have come from Pfizer, which developed its shot with Germany’s BioNTech, and Moderna. They have inoculated about 99 million and 68 million people, respectively. Johnson & Johnson is third with about 14 million people.

No one knows yet how many people will get the extra shots. But Morningstar analyst Karen Andersen expects boosters alone to bring in about $26 billion in global sales next year for Pfizer and BioNTech and around $14 billion for Moderna if they are endorsed for nearly all Americans.

Those companies also may gain business from people who got other vaccines initially. In Britain, which plans to offer boosters to everyone over 50 and other vulnerable people, an expert panel has recommended that Pfizer’s shot be the primary choice, with Moderna as the alternative.

Andersen expects Moderna, which has no other products on the market, to generate a roughly $13 billion profit next year from all COVID-19 vaccine sales if boosters are broadly authorized.

Potential vaccine profits are harder to estimate for Pfizer, but company executives have said they expect their pre-tax adjusted profit margin from the vaccine to be in the “high 20s” as a percentage of revenue. That would translate to a profit of around $7 billion next year just from boosters, based on Andersen’s sales prediction.

J&J and Europe’s AstraZeneca have said they don’t intend to profit from their COVID-19 vaccines during the pandemic.

For Pfizer and Moderna, the boosters could be more profitable than the original doses because they won’t come with the research and development costs the companies incurred to get the vaccines on the market in the first place.

Drugmakers aren’t the only businesses that could see a windfall from delivering boosters. Drugstore chains CVS Health and Walgreens could bring in more than $800 million each in revenue, according to Jeff Jonas, a portfolio manager with Gabelli Funds.

Jonas noted that the drugstores may not face competition from mass vaccination clinics this time around, and the chains are diligent about collecting customer contact information. That makes it easy to invite people back for boosters.

Drugmakers are also developing COVID-19 shots that target certain variants of the virus, and say people might need annual shots like the ones they receive for the flu. All of that could make the vaccines a major recurring source of revenue.

The COVID-19 vaccines have already done much better than their predecessors.

Pfizer said in July it expects revenue from its COVID-19 vaccine to reach $33.5 billion this year, an estimate that could change depending on the impact of boosters or the possible expansion of shots to elementary school children.

That would be more than five times the $5.8 billion racked up last year by the world’s most lucrative vaccine — Pfizer’s Prevnar13, which protects against pneumococcal disease.

It also would dwarf the $19.8 billion brought in last year by AbbVie’s rheumatoid arthritis treatment Humira, widely regarded as the world’s top-selling drug.

This bodes well for future vaccine development, noted Erik Gordon, a business professor at the University of Michigan.

Vaccines normally are nowhere near as profitable as treatments, Gordon said. But the success of the COVID-19 shots could draw more drugmakers and venture capitalists into the field.

“The vaccine business is more attractive, which, for those of us who are going to need vaccines, is good,” Gordon said.

Federal health regulators said late Friday that kid-size doses of Pfizer’s COVID-19 vaccine appear highly effective at preventing symptomatic infections in elementary school children and caused no unexpected safety issues, as the U.S. weighs beginning vaccinations in youngsters. The Food and Drug Administration posted its analysis of Pfizer’s data ahead of a public meeting next […]
PUBLIC HEALTH・19 HOURS AGO
KTLA

Here’s what to know about COVID-19 vaccine boosters

Millions more Americans just became eligible for COVID-19 boosters, but figuring out who’s eligible and when can be confusing. And adding to the challenge is that this time around, people can choose a different brand of vaccine for that extra dose. A number of factors, including the vaccine you started with and when your last […]
PHARMACEUTICALS・18 HOURS AGO
KTLA

The number of Americans applying for unemployment benefits fell last week to a new low point since the pandemic erupted, evidence that layoffs are declining as companies hold onto workers. Unemployment claims dropped 6,000 to 290,000 last week, the third straight drop, the Labor Department said Thursday. That’s the fewest people to apply for benefits since […]
PUBLIC HEALTH・1 DAY AGO
Reuters

If You Get the Pfizer Booster, This Is How Protected You Are From Delta

In late September, Pfizer boosters were authorized for adults 65 and older and those 18 to 64 with underlying medical conditions or high-risk exposure to COVID by the U.S. Food and Drug Administration (FDA) and the Centers for Disease Control and Prevention (CDC). These select groups initially had to be six months out from having received their second Pfizer dose, but on Oct. 20, the FDA officially authorized mixing and matching vaccine boosters. So now, eligible Moderna and Johnson & Johnson recipients are also able to get a Pfizer booster before official recommendations come out from the CDC about the Moderna and Johnson & Johnson boosters. Wondering if you should get a Pfizer shot now? New research now shows how much a Pfizer booster protects you from Delta.
MEDICAL & BIOTECH・1 DAY AGO
firstforwomen.com

This is the time of year to enjoy pumpkin spiced lattes, hayrides, and apple picking, but it’s also when we should all think about our immunity. Covid-19 and the flu may both pick up speed as the weather gets colder and we move indoors. However, there’s something you can do to reduce the risk of a hospital stay. Researchers at the University of Miami Miller School of Medicine found evidence that the flu vaccine protects against severe Covid-19.
PUBLIC HEALTH・13 HOURS AGO
The Motley Fool

Why the FDA Isn't Thrilled About Moderna's COVID-19 Booster

The FDA took a decidedly neutral stance in its briefing documents for a review of Moderna boosters. The data shows that the boosters do increase antibody levels and appear to be safe. It's unclear whether Moderna boosters are needed, but the FDA green-lit the boosters Wednesday. On Wednesday, the Food...
PUBLIC HEALTH・1 DAY AGO
CNET

For the most up-to-date news and information about the coronavirus pandemic, visit the WHO and CDC websites. The White House is currently reviewing the Occupational Safety and Health Administration's employer vaccine rule for final review. Once it's approved, companies employing 100 or more people will need to require their workers to get the COVID-19 vaccine or get tested for the deadly disease at least once weekly, as part of a new vaccination mandate issued by President Joe Biden in September. The requirement is designed to curb the surge in coronavirus cases, hospitalizations and deaths caused by the delta variant.
U.S. POLITICS・14 HOURS AGO

DANVILLE — Geisinger is offering booster doses of the COVID-19 vaccines for eligible individuals in accordance with recently issued guidance from the Centers for Disease Control and Prevention and the Food and Drug Administration. People who have received their two doses of the Moderna or Pfizer COVID-19 vaccine are eligible...
DANVILLE, PA・12 HOURS AGO
myrgv.com

Now that the CDC has granted approval for more people to get a COVID-19 vaccine booster shot, at least one pharmacy in Billings is seeing a rush to get shots. At Pharm406 on Billings West End, more than a dozen people were lined up to get the boost Friday just after noon, which employees were happy to see.
BILLINGS, MT・9 HOURS AGO

What Are Vaccine Boosters & Are Experts Going to Recommend Them for COVID-19 Vaccines?

The United States is making great strides in battling the COVID-19 pandemic. Deaths and hospitalizations rates are on the decline following a surge from the highly transmissible Delta variant, and over 55 percent of the population is fully vaccinated. But despite COVID-19 mitigation efforts and vaccine efficacy, the Centers for Disease Control and Prevention released data last month showing Pfizer’s vaccine level of protection dropped significantly after four months of full vaccination.
PHARMACEUTICALS・12 HOURS AGO
News 12

Boosters from all three major manufacturers can now be administered.
PUBLIC HEALTH・9 HOURS AGO
News 12

Those who received the Moderna or Pfizer shot and meet the criteria can get a booster six months after their second dose.
PHARMACEUTICALS・11 HOURS AGO
MarketWatch

People who got J&J’s COVID-19 shot can get a booster. Which one should they get?

The 15 million people in the U.S. who got Johnson & Johnson’s COVID-19 vaccine now have the option to get a second shot of their choosing.
PUBLIC HEALTH・2 DAYS AGO
Idaho's Newschannel 7

BOISE, Idaho — According to the Idaho Department of Health and Welfare, 817,000 Idahoans are fully vaccinated and nearly 72,000 people in the Gem State have received a COVID-19 booster shot. On Thursday, the Centers for Disease Control and Prevention voted unanimously to allow Moderna boosters six months after vaccination....
IDAHO STATE・1 DAY AGO
The Guardian

U.S. has donated 200 million COVID shots to help vaccinate rest of the world

The U.S. on Thursday donated its 200 millionth COVID-19 shot to help vaccinate the rest of the world, the White House announced. The Biden administration aims to lead a global vaccination campaign even as it rolls out boosters for domestic use, which critics say diverts doses from those who are in greater need around the world. […]
U.S. POLITICS・1 DAY AGO
Pittsburgh Post-Gazette

COVID-19 vaccine: CDC signs off on Moderna and J&J boosters, says people can get shot different from their original one

WASHINGTON — Tens of millions of Americans can sign up to get Moderna and Johnson & Johnson boosters beginning Friday after the nation’s top public health official endorsed recommendations from expert advisers that the shots are safe and effective at bolstering protection against the coronavirus. The green light from Dr....
PHARMACEUTICALS・1 DAY AGO