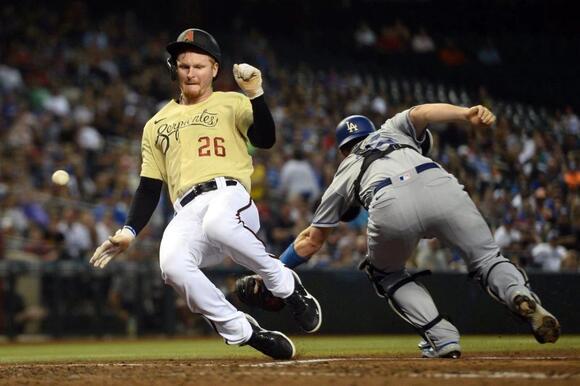 AJ Pollock hit a home run and Tony Gonsolin pitched five solid innings as the Los Angeles Dodgers won for the 11th time in their last 13 games with a 4-2 victory Friday over the host Arizona Diamondbacks in Phoenix.

Justin Turner and Will Smith each drove in runs as the Dodgers (99-55) improved to 5-2 on their final road trip of the season, which has two games remaining at Arizona.

Kole Calhoun hit a home run as the Diamondbacks (49-105) lost for the ninth time in their last 11 games.

The victory kept the Dodgers one game behind the National League West-leading San Francisco Giants, who earned a 7-2 victory over the Colorado Rockies to win for the 14th time in their last 18 games. The Giants and Dodgers each have eight games remaining.

The Dodgers jumped in front with a three-run second inning. Smith led off with a double and Turner singled him home for the game’s first run. Pollock followed with a home run to left-center field against his former team, his 17th of the season and first since returning from the injured list Wednesday because of a left hamstring strain.

The Diamondbacks answered quickly with Calhoun’s home run, his fifth of the season. Arizona then pulled within a run at 3-2 in the fifth inning on Josh VanMeter’s RBI single to left.

Gonsolin (4-1) allowed two runs on three hits over his five innings of work with no walks and seven strikeouts. It was his fourth outing and third start since returning from the IL earlier this month because of right shoulder inflammation.

The Dodgers added a run in the sixth inning on a sacrifice fly from Smith to bring home Trea Turner, who doubled and went to third on a single by Max Muncy.

Dodgers closer Kenley Jansen pitched a scoreless ninth inning for his 35th save in 40 chances, as Los Angeles left fielder Chris Taylor made one diving catch and one sliding catch in foul territory in the final inning to help preserve the victory.

The Los Angeles Dodgers are going to the National League Championship Series! The Dodgers beat the Giants in San Francisco in a critical and nerve-racking winner-take-all Game 5 of the National League Division Series. The game was 0-0 up until both teams scored in the 6th inning. Mookie set the table. Corey delivered. pic.twitter.com/QJdAVFhzMK— Los The post Dodgers beat Giants to advance to the NLCS appeared first on KESQ.
MLB・1 DAY AGO
SFGate

San Francisco Giants fans and Los Angeles Dodgers fans had a touching moment of unity during Game 5 of the NLDS Thursday night in expressing their collective disdain for a Giants fan sitting behind home plate. The fan, who was wearing a jersey, hat and necklace/chain of some sort, frequently...
MLB・1 DAY AGO
Los Angeles Times

A check swing is unlike any other call in baseball. It isn't defined in the rule book, is often deferred from one umpire to another, and can't be reviewed.
NFL・1 DAY AGO

Julio Urias became the Dodgers' first 20-game winner since Clayton Kershaw in 2014, pitching one-run ball into the seventh inning as Los Angeles beat the Brewers 8-3 on Saturday night to extend the NL West race to the final day of the regular season. "The only focus for us is to win tomorrow," manager Dave Roberts said. "That's all we can control."
MLB・13 DAYS AGO
MLB Game Highlights

Chris Taylor launches a two-run walk-off home run to left-center, sending the Dodgers to the NLDS to face the Giants.
9 DAYS AGO
Sportsnaut

If the rest of the MLB playoffs live up to the NL wild-card game, baseball fans are in for a treat. The Los Angeles Dodgers needed all nine innings to shake loose of the red-hot St. Louis Cardinals on Wednesday night, but they were able to advance to the NLDS in emphatic fashion thanks to a Chris Taylor walk-off home run to seal a 3-1 victory.
MLB・10 DAYS AGO

NEW YORK --Mookie Betts and the reigning World Series champion Los Angeles Dodgers had four of the top-10-selling jerseys in Major League Baseball this season. Betts' No. 50 uniform claimed the top spot for the second straight year after he was acquired before the 2020 season from the Boston Red Sox. He's joined in the top 10 by teammates Clayton Kershaw at five, Cody Bellinger at six and World Series MVP Corey Seager at eight. Kershaw and Seager are set to become free agents.
MLB・12 DAYS AGO
USA TODAY

Dodgers manager Dave Roberts said it was an organizational decision to start Corey Knebel in Game 5, instead of Julio Urias against the Giants.
MLB・2 DAYS AGO
cbslocal.com

Dodger Mania Sweeping Los Angeles Ahead Of NLDS Against Giants

LOS ANGELES (CBSLA) – Lunch at Philippe’s The Original in Downtown LA came with a side of Dodgers pride and hunger for another World Series title. After Wednesday’s walk-off win against the St. Louis Cardinals in the National League wild-card game, Dodger fever was in the air for customers grabbing lunch on Thursday.
MLB・8 DAYS AGO

The Dodgers spent the entire year chasing the Giants in the NL West. Thanks in part to a series of injuries, off-field issues, and underperformance from key players, Los Angeles never caught up to San Francisco. That cost them their 9th consecutive division title and forced them into a Wild Card Game.
MLB・8 DAYS AGO
Post-Crescent

The Los Angeles Dodgers and San Francisco Giants open their National League Division Series Friday at Oracle Park in a matchup of the majors' best two records. First pitch is scheduled for 9:37 p.m. ET (TBS). Let's analyze the lines around the Dodgers vs. Giantsodds with MLB picks and predictions.
MLB・8 DAYS AGO
abc10.com

SAN FRANCISCO — The 107-win Giants and 106-win Dodgers are ready to throw out all those wins and settle their season-long clash with a best-of-five NL Division Series in San Francisco. It’s the first time the rivals have met in the postseason despite going way, way back to their memorable...
MLB・8 DAYS AGO
Sportsnaut

Moments after complaining that his hitters failed to make adjustments in Game 1 of the National League Division Series, Los
MLB・7 DAYS AGO
SFGate

It took 107 wins, but the San Francisco Giants - not the Los Angeles Dodgers - are NL West champions

The San Francisco Giants took care of business on Sunday, as they've done the whole MLB season. And their 11 to 4 victory against the San Diego Padres eliminated any doubts and all the drama at the top of the NL West standings. The Giants won their 107th game, the...
MLB・13 DAYS AGO
vavel.com