India's Modi targets neighbors at UN, but not by name 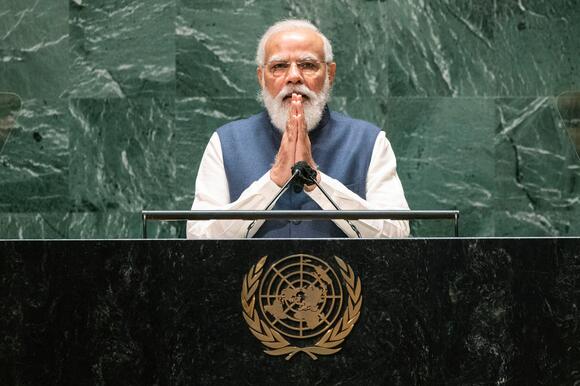 Indian Prime Minister Narendra Modi didn't directly mention Pakistan or China in his Saturday speech to the United Nations General Assembly but the targets of his address were clear.

He called upon the international community to help the women, children and minorities of Afghanistan and said that it was imperative the country not be used as a base from which to spread terror.

“We also need to be alert and ensure that no country tries to take advantage of the delicate situation there, and use it as a tool for its own selfish interests,” he said in an apparent reference to Pakistan, wedged in between Afghanistan and India.

Modi also highlighted what he called the need to protect oceans from “the race for expansion and exclusion.” India and China have long competed for influence in the Indian Ocean.

On the heels of waves of coronavirus surges that have ravaged India, Modi made no mention of his own country's death toll. But he reaffirmed last week's announcement that India would restart exporting vaccines next month.

“Deeply conscious of its responsibility towards mankind, India has resumed the process of providing vaccines to those who need it in the world,” Modi said, also inviting vaccine manufacturers to come to India.

Modi said it was incumbent on the United Nations itself to strengthen its own effectiveness and boost its credibility.

“Today, all kinds of questions have been raised about the U.N.," he said. "We have seen such questions being raised related to the climate crisis. And we also saw that during COVID, the proxy war going on in many parts of the world, terrorism, and the recent Afghan crisis have further highlighted the seriousness of these questions.”

As the Taliban removed ethnic Uyghur militants from the border zone between Afghanistan and China, observers said there could be a revived policy coordination between the new leadership in Kabul and the Communist Party in Beijing. According to a UN report, there are 500 Uyghur militants among the Taliban. If...
POLITICS・1 DAY AGO
Vice

It’s no secret that the two nuclear powers and South Asian neighbours India and Pakistan don’t get along. The tension between them is palpable on their heavily armed borders and among their politicians, and it has often spilled into cricket, the sport the two former British colonies are obsessed with.
SPORTS・2 DAYS AGO
Washington Post

MOHRANIYA, India — Gurvinder Singh was an introspective young farmer from northern India, a deeply devout Sikh who rarely left the straw hut he built for worship, much less ventured beyond his family’s meager one-acre farm. But his death, on Oct. 3, would reverberate across this country. Singh left home...
ADVOCACY・12 DAYS AGO
Birmingham Star

New Delhi [India], October 23 (ANI): Lauding the Indian Air Force (IAF) for its crucial role in the 1971 war, Foreign Secretary Harsh Vardhan Shringla noted that the heroics of India's fighter pilots provided some of the most inspiring moments of the war. "The Indian Air Force played a crucial...
INDIA・4 DAYS AGO

Police in India said Saturday they've arrested the son of a junior minister in Prime Minister Narendra Modi’s government after nine people died during protests against new farming laws, per AP. The big picture: It's the latest escalation in massive ongoing demonstrations against the laws, which were introduced in 2020...
SOCIETY・18 DAYS AGO
Reuters

NEW DELHI (Reuters) - India’s Prime Minister Narendra Modi said on Friday that economic growth was getting a boost from rising vaccinations across the country and urged citizens to purchase locally manufactured products over the upcoming festive season. Modi called for vigilance against COVID-19 and recommended wearing masks during festivals.
PUBLIC HEALTH・6 DAYS AGO
wincountry.com

Kushinagar (Uttar Pradesh) [India], October 20 (ANI): Prime Minister Narendra Modi on Wednesday quoted Lord Buddha's teaching "Appa Deepo Bhava" meaning 'be your own light' and said it is the motivation for India to become self-reliant. The Prime Minister's remarks came during his address at an event organised to mark...
INDIA・7 DAYS AGO

New Delhi [India], October 21 (ANI): As India celebrated the milestone of administering 100 crore Covid-19 vaccination doses, SpiceJet airlines on Thursday unveiled a special livery to honour the contribution of frontline workers and corona warriors who helped make this dream a reality. The livery includes an image of Prime...
INDIA・6 DAYS AGO
The Independent

India’s prime minister Narendra Modi will be attending the crucial United Nations climate summit COP26, the country’s environment ministry has confirmed. The summit beginning on 31 October in Glasgow is co-hosted by the UK and Italy, and will have 197 countries participating to discuss their climate action goals. COP26 is seen as the most important climate summit since the Paris Agreement was signed, with countries expected to ramp up their individual contributions to tackle the climate crisis in the hope of keeping global warming to 1.5C. The confirmation of Mr Modi’s attendance came from India’s environment minister Bhupender...
INDIA・6 DAYS AGO
The Independent

No clearance yet for India’s homegrown Covaxin jab, as WHO seeks ‘additional clarifications’

An independent technical advisory committee of the World Health Organisation (WHO) has sought “additional clarifications” from Covaxin makers, lengthening the wait for India’s homegrown jab to get the world body’s clearance.Covaxin’s Hyderabad-based manufacturer Bharat Biotech has been awaiting a nod for the global health agency since April, when it had submitted an expression of interest for emergency-use listing.It is India’s first indigenously made Covid-19 vaccine and one of the three jabs currently being used in the country’s inoculation drive. India’s drugs control body had approved the restricted emergency use of Covaxin in January. As of 27 October, 118 million doses...
HEALTH・18 HOURS AGO

Police in the federal territory of Jammu and Kashmir registered cases on Monday under a draconian anti-terrorism law against students of a medical college for allegedly celebrating the Pakistan team’s victory over India in a cricket match.The students of Government Medical College (GMC) and Sher-i-Kashmir Institute of Medical Sciences were booked under sections of the Unlawful Activities (Prevention) Act, an anti-terrorism law meant for bolstering internal security but often used to throttle political dissent.The hostel wardens and managers of the medical colleges were also booked by the Kashmir police.Kashmir is at the heart of a decades-old dispute between India and...
INDIA・18 HOURS AGO
raleighnews.net

In a rare joint appeal, the leaders of Pakistan and China on Tuesday urged the international community to swiftly send humanitarian and economic aid to Afghanistan where people are facing food and medicine shortages in the shadow of winter. A government statement said Pakistani Prime Minister Imran Khan and Chinese President Xi Jinping discussed Afghanistan by phone, saying afterward that people there need international help “to alleviate their suffering, prevent instability" and rebuild after the United States withdrew and the Taliban seized power in August. The latest development came a day after Chinese Foreign Minister Wang Yi met...
ADVOCACY・1 DAY AGO
dallassun.com

Southeast Asian leaders began a virtual summit Tuesday, with Myanmar skipping the annual meeting in protest after its top general was shut out for refusing to cooperate in defusing the crisis in his country since the military takeover. The exclusion of Senior Gen. Min Aung Hlaing was an embarrassment for Myanmar’s military and the harshest rebuke by the Association of Southeast Asian Nations since the military ousted civilian leader Aung San Suu Kyi and took over the government Feb. 1.Brunei, who is this year’s chair of the 10-member bloc, invited Myanmar’s highest-ranking veteran diplomat, Chan Aye, as a “non-political”...
WORLD・2 DAYS AGO
The Independent

India’s top court on Wednesday established a committee of experts to look into accusations that Prime Minister Narendra Modi’s government used Israeli military-grade spyware to monitor political opponents, journalists and activists.The Supreme Court order came in response to petitions filed by a group of Indian journalists, rights activists and opposition politicians following an investigation by a global media consortium in July. The committee, headed by a retired judge, is expected to give its findings by year-end.India’s opposition has been demanding an investigation into how the Israeli spyware, known as Pegasus, was used in India.Modi’s government has “unequivocally” denied all...
INDIA・21 HOURS AGO
The Independent

Police in Indian-controlled Kashmir are investigating students and staff at two medical colleges under a harsh anti-terror law for celebrating India's loss to archrival Pakistan in a T20 World Cup cricket game, officials said Tuesday.Police said some students and staff at the government-run colleges cheered and shouted pro-Pakistan slogans during the match Sunday night, calling it “anti-national” activity.Pakistan crushed India by 10 wickets for its first-ever victory against its archrival in a T20 World Cup game in Dubai. Minutes after Pakistan won the match, hundreds of people in Kashmir danced in the streets, lit firecrackers and chanted “Long live...
INDIA・1 DAY AGO