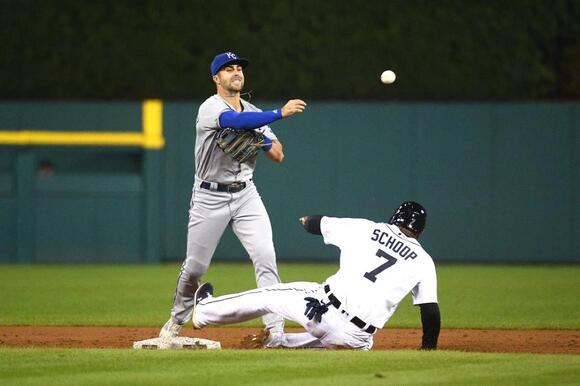 Hernandez gave up two hits and survived three walks, striking out one. Domingo Tapia (4-0) was credited with the win despite giving up Detroit’s lone run. Scott Barlow pitched the ninth for his 15th save.

Ryan O’Hearn reached base three times, scored a run and drove in another for Kansas City (70-83). Kyle Isbel added two hits and scored a run in the opener of a three-game series.

The Tigers loaded the bases in the first when Jonathan Schoop was hit by a pitch and Grossman and Jeimer Candelario drew walks. Hernandez got out of that jam when Harold Castro lined out to right field. 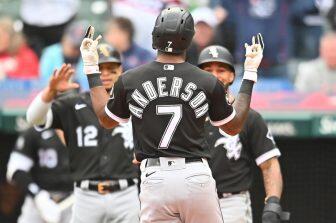 The Royals scored their first run in the third. O’Hearn reached on a leadoff single and Isbel hit a one-out double to put runners in scoring position. O’Hearn scored on Merrifield’s sacrifice fly.

The Tigers tied it in the sixth. Grossman led off with a walk and moved up on Miguel Cabrera’s single. Grossman advanced to third on Castro’s long flyout and scored on Haase’s single to right. Haase was thrown out trying to advance to second.

Kansas City regained the lead the next inning against reliever Alex Lange (0-3). Adalberto Mondesi hit a one-out triple to right center field. He scored on an O’Hearn single.

Detroit had two doubles in the seventh but Niko Goodrum was thrown out trying to stretch his extra-base hit into a triple. Reyes followed with his double but was left stranded when the next two batters struck out.

The Royals made it 3-1 in the eighth when Isbel led off with a triple and scored on another Merrifield sacrifice fly.

The App is Back! Don’t forget to download the NBC Sports EDGE app to receive real-time player news, mobile alerts and track your favorite players. Plus, now you can check out articles and player cards. Get it here!. Kansas City Royals. 2021 Record: 74-88 Fourth Place, AL Central. Team ERA:...
MLB・8 DAYS AGO
excelsiorspringsstandard.com

Can the Tigers re-start their home win streak?

For a team that has lost three straight conference games, entering a short week against a team that runs the triple option is less than ideal. That is the exact predicament the Memphis Tigers (3-3, 0-2) will find themselves in when they host the Navy Midshipmen (1-4, 1-2) Thursday night.
MEMPHIS, TN・9 DAYS AGO
FanSided

The Kansas City Royals did not make many moves at the trade deadline, but one move was expected to make a difference. Danny Duffy, despite being on the Injured List, was sent to the Dodgers for a Player to be Named Later. As Duffy had his return delayed seemingly by the week, only to never return, one had to imagine that return for the Royals would not be significant.
MLB・2 DAYS AGO

Boston Red Sox fans let Kyle Schwarber have it for letting a pop-up land on the infield, and he probably had it coming. If you let Schwarber play first base long enough, something like this was bound to happen. The Sox knew this when they acquired him from the Washington Nationals, and they sure as hell didn’t trade for him because of his defensive ability.
MLB・28 DAYS AGO
FanSided

Former St. Louis Cardinals player Skip Schumaker appears to be a candidate for the managerial opening. The St. Louis Cardinals’ move to fire manager Mike Shildt stunned the industry. No one, and I mean absolutely no one, saw it coming. Yet within minutes of the news to announce the move, candidates to replace Shildt at the helm had already begun to surface.
MLB・8 DAYS AGO
CBS Sports

The Chicago White Sox were eliminated from the playoffs on Tuesday after losing Game 4 of their American League Division Series, 10-1, to the Houston Astros. The White Sox, specifically manager Tony La Russa, did not go quietly into the winter, however. Rather, La Russa made it clear that he...
MLB・10 DAYS AGO

Carlos Correa had a message for Ryan Tepera after Correa’s Houston Astros knocked Tepera’s Chicago White Sox out of the playoffs on Tuesday. Correa’s Astros won Game 4 of their ALDS with the White Sox 10-1 in Chicago on Tuesday to clinch the series. The Astros had 10 runs on 14 hits in the game. Correa went 2-for-4 with two RBIs.
MLB・10 DAYS AGO
Sportsnaut

The biggest winner of the 2021 major league season is … the 2017 Houston Astros. Settle down. I have not come to exonerate or forgive the sign stealers. I would not argue with anyone who feels the players got off easy by not facing suspension, and the bans on, say, Alex Cora and A.J. Hinch should have been longer than one year considering their one-year expulsions came in the one year the major league season was 60 regular-season games.
MLB・28 DAYS AGO

Former St. Louis Cardinals manager Mike Shildt may not be down on his luck for long. Dennis Lin of The Athletic reported Sunday that the San Diego Padres are expected to interview Shildt for their managerial opening. The interview will be Shildt’s first since he was fired by the Cardinals last week.
MLB・5 DAYS AGO
MLB

ST. LOUIS -- Asked about the direction the Cardinals' organization will go after Mike Shildt was relieved of his managerial duties on Thursday, president of baseball John Mozeliak immediately pointed to “some quality internal candidates” who can lead St. Louis into its next phase. That tenor has carried throughout the organization’s lengthy and successful history.
MLB・9 DAYS AGO
Larry Brown Sports

Justin Verlander may not be able to help the Houston Astros in their quest for another World Series title, but the star pitcher had some advice for the team during the first game of the ALCS. Carlos Correa helped the Houston Astros come from behind to beat the Boston Red...
MLB・7 DAYS AGO
Sporting News

Mike Shildt will have to find his Cardinal way to the unemployment line. On Thursday, the first stunner of the offseason came to pass when the Cardinals fired Shildt, handing him his walking papers after a 90-win season that featured a 17-game winning streak in the closing stages of the 2021 campaign. St. Louis president John Mozeliak would make the move official in a press conference.
MLB・9 DAYS AGO

Verlander (elbow) is expected to receive a qualifying offer from the Astros this offseason, Chandler Rome of the Houston Chronicle reports. Verlander could potentially have an interesting decision on his hands. If healthy, he'd almost certainly receive more than the qualifying offer, which was worth $18.9 million over one year last year. He'll enter next season as a 39-year-old coming off of Tommy John surgery, so it's much less clear what his value will be on the open market. If he rejects the offer and signs elsewhere, Houston will receive draft-pick compensation.
MLB・16 DAYS AGO
USA TODAY

It's the question everyone is asking: Why is Joc Pederson wearing a pearl necklace? If there's anyone who can pull it off, it's the Braves outfielder.
MLB・2 DAYS AGO
Larry Brown Sports

The reaction San Francisco Giants first base coach Antoan Richardson had to first base umpire Gabe Morales’ call on a check swing went viral on Thursday night. The Giants lost 2-1 to the Los Angeles Dodgers in Game 5 of the NLDS at Oracle Par in San Francisco. The game ended after Morales said that Wilmer Flores went around on a check swing on a 0-2 pitch from Max Scherzer with two outs (see it here). Most people recognized right away that Morales blew the call.
MLB・8 DAYS AGO
USA TODAY