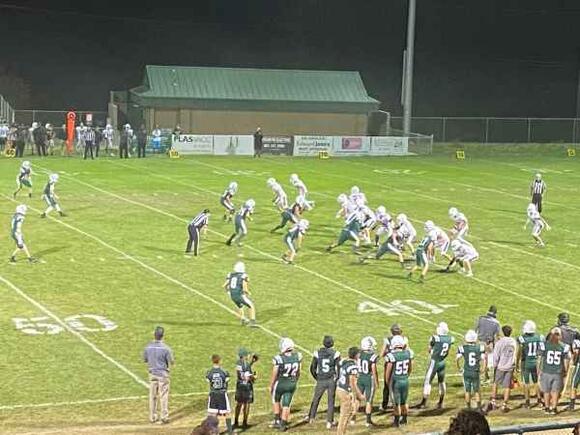 – The Templeton Eagles celebrated Homecoming by beating the Piedmont Highlanders 15-0 Friday night. The sophomore-laden Eagles improve to 3-2 for the season. Senior Kale Loppnow ran the opening kickoff back 71-yards for a touchdown. The Eagles scored a two-point conversion to take an 8-0 lead in the first fifteen seconds of the game.

That early lead held until the final minutes. Late in the 4th quarter, Junior Landon Miller scored on a 20-yard run to make it 14-0. Sr. Hayden Swift kicked the extra point to make the final score, 15-0.

The Eagles twice intercepted Highlanders QB Nico Fazio. Sophomore Johnny Peschong stopped another Piedmont drive with an inspiring solo tackle on Defazio for a two yard loss on second down. Templeton made impressive defensive stands on several occasions to force the Highlanders to turn over possession on downs. The defensive backs covered well the Highlander secondary. Their play led to Templeton’s second shut-out of the season.

The Atascadero Greyhounds (1-4) lost Friday night to the Royal Highlanders in Simi Valley, 34-6. The Highlanders jumped out to a 21-6 lead in the first quarter. They scored additional touchdowns in the second and fourth quarter, but missed the final extra point.

Season wraps up next week with away game in Arroyo Grande. – The Paso Robles High School Football Team plays it’s final regular season game at War Memorial Stadium Friday night. The Bearcats (5-2) host Righetti (1-6) in the annual Senior Game. Before the game, seniors on the team, (and their families), will be introduced to those in attendance.
ARROYO GRANDE, CA・15 HOURS AGO
Paso Robles Daily News

Coaches comment: Jack Wood is our leading rusher for the season, 914 yards in seven games. He is also our leading receiver. Jack has punted, kicked extra points, and thrown two passes this year. He has done anything we have asked him to do, plus he will volunteer to help in any way he can. Jack is a charismatic team leader and pushes himself every day in practice. We are very fortunate to have him on our team. – Coach Don Crow.
TEMPLETON, CA・10 HOURS AGO
Paso Robles Daily News

Coach’s comment: Bearcat Varsity Tennis competed in the Mountain League Finals and played well. At the end of the day, the doubles team of Cahryn Payne and Rana Takada qualified for day two and a chance to advance into the Area Tournament with the Ocean League Finals. Both girls have been team leaders and strong players throughout our season and a huge part of our success in taking a third-place ranking in league and a spot to play in CIF D2 next week. – Coach Laura Clowes.
PASO ROBLES, CA・1 DAY AGO

– The Paso Robles Bearcats beat the Pioneer Valley Panthers 15-6 Friday night at War Memorial Stadium. A good Homecoming crowd saw the Bearcats fall behind early. They trailed 6-0 at halftime. But in the second half, it was all Bearcats. With the victory, the Bearcats improve to 5-2, 2-0...
PASO ROBLES, CA・6 DAYS AGO
Paso Robles Daily News

– The Paso Robles High School Girls’ Golf Team competed against Atascadero High School this week. The Bearcats hosted the Greyhounds at The Paso Robles Golf Club on Tuesday and earned a win with a team score of 255 to Atascadero’s 262. Paso High’s Malia Gaviola was the individual medalist with a score of 45.
ATASCADERO, CA・7 DAYS AGO
Paso Robles Daily News

– The Lady Bearcat varsity water polo team competed in the Arroyo Grande Fall Classic water polo tournament over the past Thursday through Saturday. On Thursday the Bearcats faced Monache and won 13 to 6. In the game goalie Kaitlyn Hebrard scored a goal. Leading scorers in the game were Sienna Lowry with five goals and Leanna Reed with four goals. The Lady Bearcats faced the AG B girls water polo team in an exciting game. The Bearcats were down by five goals with under five minutes to play.
ARROYO GRANDE, CA・11 DAYS AGO
Paso Robles Daily News

Drillers 8/U Baseball Club ends their 2021 season, shares stats. – The 8 and under Driller Baseball Club from Paso Robles ended the 2021 travel ball season as Nation Champions according to the National Championship Sports Baseball (NCS). The Drillers posted some incredible stats for the year. The mighty Drillers ended the season with an overall record of 44-4, won 9 of the 11 tournaments they entered, and finish twice as runner up.
PASO ROBLES, CA・11 DAYS AGO