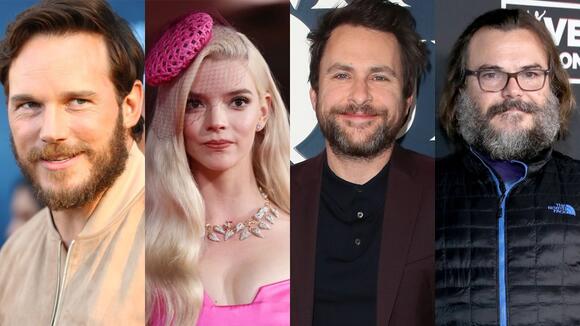 LOS ANGELES ( KSEE/KGPE ) — In a Thursday tweet, Illumination announced the voice cast for a movie based in Nintendo’s iconic Super Mario Bros. universe.

Chris Pratt will be voicing everybody’s favorite plumber, Mario, while Anya Taylor-Joy will put down the chessboard to voice Peach.

Additionally, Illumination promises cameos from Charles Martinet, the original voice of Mario, Luigi and other characters in the Nintendo universe.

Disney on Monday announced major changes to its upcoming film release schedule for 2022, including the delay of several films.
MOVIES・1 DAY AGO
KFOR

A production company will hold auditions in search of an Oklahoma choir for a film that will shoot in Oklahoma City and surrounding areas.
OKLAHOMA STATE・15 HOURS AGO
KFOR

Actress Melissa Joan Hart won big on the celebrity edition of "Wheel of Fortune," and a Memphis-based nonprofit is celebrating.
MEMPHIS, TN・18 HOURS AGO
KFOR

NEW YORK (WPIX) – A statue of Harambe, a 17-year-old gorilla whose death sparked international outcry, went face to face with the Charging Bull statue in Manhattan Monday. The seven-foot statue of the silverback gorilla appeared opposite of the famous Charging Bull statue in the Financial District. In addition to the Harambe statue, 10,000 bananas […]
NEW YORK CITY, NY・18 HOURS AGO

Halloween is just weeks away, and the Oklahoma City Zoo and Botanical Garden is hoping to celebrate the spooky season in style.
OKLAHOMA STATE・1 DAY AGO
KFOR

‘I freaked out’: Ultra-rare catfish caught, released into Mississippi River

Chad Hester was doing some overnight fishing last week in the Mississippi River in Missouri when he and a friend came across something they almost couldn’t believe.
LIFESTYLE・1 DAY AGO
KFOR

The bizarre incident, which unfolded on a Delta Air Lines flight to New York City, was caught on camera and uploaded to TikTok over the weekend.
PUBLIC HEALTH・19 HOURS AGO

If you love historic books, you will not want to miss a fundraiser for the Oklahoma Historical Society.
OKLAHOMA CITY, OK・23 HOURS AGO
KFOR

Travel back in time for the Wewoka Sorghum Festival

Facebook to hire 10,000 in EU to build ‘metaverse’ platform

Facebook said it plans to hire 10,000 workers in the European Union over the next five years to work on a new computing platform that promises to connect people virtually but could raise concerns about privacy and the social platform gaining more control over people's online lives.
INTERNET・22 HOURS AGO
KFOR

He bought the place and started agri-tourism before it even had that name.
OKLAHOMA CITY, OK・1 DAY AGO

Now that Taco Bell has brought breakfast back to its menus, it's celebrating by giving away free food.
OKLAHOMA CITY, OK・19 HOURS AGO
KFOR

A couple of Oklahoma breweries are teaming up with the Oklahoma Zoological Society to create an official beer to stress the importance of conserving wildlife.
OKLAHOMA STATE・23 HOURS AGO
KFOR

City of Norman sets dates for COVID-19 vaccination pop-up PODS, incentives offered to those who get vaccinated

COVID-19 vaccination PODS will be held in various locations across Norman starting this week and throughout November.
NORMAN, OK・10 HOURS AGO
KFOR

While Christmas is still more than two months away, retailers across the country would like you start thinking about the holiday season, and more specifically Black Friday.
OKLAHOMA CITY, OK・1 DAY AGO

Affair of the Heart coming to State Fair Park

One of the country's largest craft shows will be coming to Oklahoma City this weekend.
OKLAHOMA CITY, OK・42 MINUTES AGO
KFOR

Friends of the Shelter Foundation is hosting 'Barks & Broos Bash' at the Angry Scotsman Brewery on Oct. 23.
OKLAHOMA STATE・23 HOURS AGO
KFOR

If reading about potential holiday shortages has you reaching for a glass of wine, you may want to think about conserving.
OKLAHOMA CITY, OK・21 HOURS AGO
KFOR

What do Oklahomans prefer? Each state’s favorite hot sauce revealed in new study

A new study of America’s most-purchased hot sauces seems to suggest that the U.S. is divided by its love for specific spicy brands.
OKLAHOMA STATE・1 DAY AGO