Pollster Zogby: Biden ‘is in trouble,’ a ‘D’ for the week

By Paul Bedard
WashingtonExaminer
24 days ago 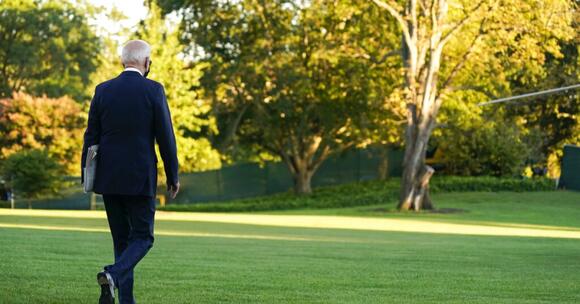 Three bad polls this week, including one showing that former President Donald Trump would easily win in a third try, are proof that President Joe Biden is on the rocks and at his lowest point in our Weekly White House Report Card.

“At the moment, he’s in trouble,” said pollster and Secrets grader John Zogby.

“Donald Trump, you know, could possibly win. The issue now is going to be whether or not Joe Biden can get his sea legs, which is very possible, but it's really challenging because he's on the defensive on so many issues,” said Zogby in his latest podcast.

This week saw the continuation of bad approval ratings for Biden, whose administration is suffering a huge rejection by independent voters over his poor withdrawal from Afghanistan, inflation, and the border crisis. The success of Democratic California Gov. Gavin Newsom’s recall victory, helped by Biden, hasn’t done much to slow the president’s slide.

And Rasmussen Reports survey found that in a new election, Trump would beat Biden by 10 percentage points and that 1 in 5 Democrats would vote for Trump.

“There is a strong element of buyer's remorse,” said Zogby in giving Biden a “D” for the week. Our conservative grader, Jed Babbin, was away this week.

A new Rasmussen Reports poll says it all for this week. If the 2020 election were conducted today, former President Donald Trump would defeat current President Joe Biden by 10 points.

The margin may be a little high for my taste, but the results speak volumes about the state of the Biden presidency thus far. Only nine months into his term and there is a strong element of buyer’s remorse.

His 41% approval is 10 points lower than the percentage of votes he received less than a year ago. And, like English novelist Thomas Hardy's “Mayor of Casterbridge,” nothing is going right for him.

Photos of Haitian refugees being rounded up and bullied at the Mexican border are horrible to watch and undermine the president's support among a key base of African American, liberal, and younger voters. A totally botched unilateral decision to sell nuclear submarines to Australia not only undermined and undercut France, our longest ally, but raised eyebrows about how the United States conducts business.

COVID-19 numbers are bad, and promises of numbers to be vaccinated have fallen far short.

And the president spoke before the United Nations about his vision, but friends and critics worldwide questioned his authority, command, and if he was actually better than Trump.

He needs a victory, but he is being squeezed by a small but growing number of centrists in Congress, as well as a large and uncompromising group of progressives. He may get a victory or two on infrastructure, voting rights, and climate — but not this week. And he really cannot have more weeks like this.

John Zogby is the founder of the Zogby Poll and senior partner at John Zogby Strategies. His weekly podcast with son and partner Jeremy Zogby can be heard here. Follow him on Twitter @ZogbyStrategies

Jed Babbin is a Washington Examiner contributor and former deputy undersecretary of defense in the administration of former President George H.W. Bush. Follow him on Twitter @jedbabbin

"Buyers remorse?" That would imply that China Joe actually got the number of votes he did. Everything since the election shows that the fraud is real and the country is paying for it.

1 in 5 democrats would vote for Trump , at least 1 out of the 5 has common sense and actually sees what rain dead Biden is doing to this country

Poll states Trump would easily win in a rematch, thats because he likey won in the first one. I am an independent but even I know it just don't add up. Just simple common sense states that you can't have election results that both people finish one and two in ENTIRE voting history of the country and then count the totals up and they exceed the amount of registered voters. That alone tells you there is fraud and history tells us that the beneficiary of the fraud is usually responsible.

Donald Trump, who claims he never conceded the 2020 election, establishes himself as a former president in his lawsuit against the Capitol riot committee and National Archives.
PRESIDENTIAL ELECTION・22 HOURS AGO
WashingtonExaminer

Senate Minority Leader Mitch McConnell said he is hoping Republicans will steer clear of relitigating the bitter 2020 election and will instead focus on the flawed Biden administration in a bid to win in the 2022 midterm elections.
PRESIDENTIAL ELECTION・2 HOURS AGO
WashingtonExaminer

Former President Donald Trump's campaign site was apparently hacked on Monday and replaced with a message from a supporter of the Turkish president.
PRESIDENTIAL ELECTION・23 HOURS AGO

Sen. Bill Cassidy was one of seven Republican senators who voted to convict Donald Trump during his second impeachment.
PRESIDENTIAL ELECTION・1 DAY AGO
Washington Examiner

Biden and the Democrats screw the little guy again

What was the greatest trick ever pulled? Was it the devil convincing the world he didn’t exist, as Charles Baudelaire said and Keyser Söze repeated? Or maybe it was Soviet Socialists and their acolytes persuading the world that National Socialists were right wing? Perhaps it was one of those. But in America for several decades, it is surely Democrats tricking people into believing they’re on the side of the little guy.
PRESIDENTIAL ELECTION・2 HOURS AGO
Lootpress

America is losing its patience with the Biden Administration

In his speech on September 9, 2021, President Joe Biden chastised unvaccinated Americans, contemptuously labeled them a “distinct minority” and stated that “We’ve been patient, but our patience is wearing thin.” However, the President’s plummeting poll numbers seem to reflect that it is actually the American people who are losing patience with his incompetent and untrustworthy administration.
PRESIDENTIAL ELECTION・2 DAYS AGO
The Independent

It's Washington s enduring question: What does Joe Manchin want?But increasingly the answer is crystal clear. The conservative West Virginia Democrat wants to dismantle President Joe Biden s proposed climate change strategies and social services expansion in ways that are simply unacceptable for most in his party.So the question becomes less about what Manchin wants and more about whether Biden can bring him, the party's other centrist senators and its progressives to middle ground and salvage his once-sweeping $3.5 trillion proposal from collapse. As the White House pushes its Democratic allies on Capitol Hill to wrap...
PRESIDENTIAL ELECTION・23 HOURS AGO

Saule Omarova's nomination has been the target of attacks over her views that the government should play a greater role in the financial system.
CONGRESS & COURTS・4 HOURS AGO
POLITICO

Trump is already trying to tangle the probe up in the courts. He doesn’t have to succeed.
PRESIDENTIAL ELECTION・1 DAY AGO
New York Post

White House not stolen, but bought with Zuckerberg’s money: Goodwin

Nearly a year has passed since the 2020 election, yet there has not been a clear, satisfactory answer to the central mystery: How did a dull, declining Joe Biden manage to get more than 81 million votes and win the presidency?. After all, Biden spent most of the pandemic-laced campaign...
PRESIDENTIAL ELECTION・2 DAYS AGO
WashingtonExaminer

A top official from the Obama-era Justice Department cited multiple weaknesses with former President Donald Trump's lawsuit against the Capitol riot committee and the National Archives.
POTUS・1 HOUR AGO

If Biden's approval rating is falling, he's got himself to blame

Joe Biden’s not having a great fall. His legislative agenda is treading water, his poll numbers are slipping, and even his core supporters are unhappy. While they are prone to point the finger at the GOP and the press corps, the reality is that the White House has largely itself to blame.
PRESIDENTIAL ELECTION・1 DAY AGO
northwestgeorgianews.com

Michael Hiltzik: Climate change policies in Biden's budget bill are in trouble. Here's what they are and why they're crucial

As part of its comprehensive investigation, the bipartisan House committee examining the Jan. 6 attack is seeking materials from the White House — not because the Biden administration bears responsibility for the insurrectionist riot, but because its predecessor does. As we've discussed, Donald Trump, eager to hide as much information...
POTUS・1 DAY AGO
TheAtlantaVoice

President Joe Biden and Vice President Kamala Harris have been working the phones to try and bolster support for voting legislation teed up for Senate consideration this week, even as the bill is set to run into a Republican blockade. Biden spoke with Democratic Sens. Raphael Warnock of Georgia and Alex Padilla of California on what a White House official […]
PRESIDENTIAL ELECTION・2 HOURS AGO

Still acclimating to the post-White House political spotlight, former President Barack Obama is back ginning up enthusiasm for President Joe Biden and other Democrats as the incumbent struggles to unite his party and the country behind his sprawling liberal agenda.
PRESIDENTIAL ELECTION・2 DAYS AGO
WREG

WASHINGTON (AP) — President Joe Biden is entering a crucial two weeks for his ambitious agenda, racing to conclude contentious congressional negotiations ahead of both domestic deadlines and a chance to showcase his administration’s accomplishments on a global stage. Biden and his fellow Democrats are struggling to bridge intraparty divides by month’s end to pass a […]
PRESIDENTIAL ELECTION・1 DAY AGO
New York Post

Last week was another bad one for the continually disappearing Biden administration. As Americans took to social media to post pictures of bare Dunkin’ Donuts shelves, sold-out milk at big-box stores and other signs of an America in trouble, we learned that Transportation Secretary Pete Buttigieg has been on paternity leave since August.
PRESIDENTIAL ELECTION・2 DAYS AGO
Newsweek

The former president has now lost the popular vote in two consecutive elections and could struggle to win in 2024.
PRESIDENTIAL ELECTION・3 DAYS AGO