Amazon's head of gaming has absurdly ambitious goals, including creating 2-3 games that 'capture millions of players and stay in the market for 10+ years' 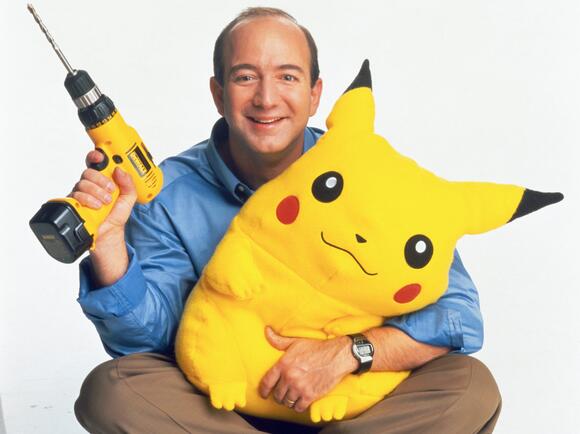 Did you know that Amazon, one of the biggest companies in the world, launched and folded a big-budget video game last year?

The game was called "Crucible," and you're forgiven if this is the first you're hearing about it. Despite being free to play and available on the world's largest gaming platform, Steam, "Crucible" quickly came and went from the top-100 chart . And after years of development and tens of millions of dollars, Amazon quietly killed "Crucible" five months after it came out.

It was emblematic of Amazon's years-long struggle to break into the lucrative video game market, from its failed set-top box project to its current, totally under-the-radar video game streaming service, Amazon Luna.

"My personal goal is to create 2-3 AAA, live-service games, which capture millions of players and stay in the market for 10+ years," Hartmann told The Verge in a recent interview .

That is a highly ambitious goal and one that few game makers manage to accomplish. There are only so many games like "League of Legends" and "Overwatch."

He has reason to be optimistic: Amazon's latest game, "New World," saw a very positive reception in a beta.

But Amazon is still miles away from the kind of games that Hartmann is talking about - games like "Destiny" and "Fortnite" that not only attract millions of players but also operate as ongoing "live-service" worlds with evolving content.

Those types of games are rare in the video game industry.

One of the industry's most prominent examples is "Grand Theft Auto V," which has crossed three console generations and continues to pull in millions of players despite having launched way back in 2013. Primarily through its multiplayer service, "Grand Theft Auto Online," millions of people continue to engage with the eight-year-old game.

Hartmann's previous employer, Take-Two Interactive, publishes "Grand Theft Auto V" and the "NBA 2K" franchise - two games that operate as live services - so he assuredly knows just how difficult those types of games are to build.

It's an especially fraught proposition at Amazon given both the company's history in gaming and the fact that Amazon isn't, fundamentally, a video game company. Amazon is an ecommerce company, a web storage company, and a supermarket chain owner. It's even a major Hollywood production house at this point.

But, outside of owning video game streaming service Twitch, Amazon isn't really focused on the video game business. It's one of many things that Amazon does.

Hartmann appears to be aware of the issue and steadfast in his grand ambitions.

"At the beginning, they tried to replicate the formula which made Amazon great," he said. "But making games is so much more complicated than it seems."

Got a tip? Contact Insider senior correspondent Ben Gilbert via email ( bgilbert@insider.com ), or Twitter DM ( @realbengilbert ). We can keep sources anonymous. Use a non-work device to reach out. PR pitches by email only, please.

TikTok star is shocked to discover Amazon has more than 3,000 recordings of her stored from her Echo speakers, as well as a list of her contacts and her LOCATION

A TikTok star was left shocked, after discovering Amazon had more than 3,000 recordings of her voice from an Echo speaker, including her location and contacts. The data privacy campaigner, who goes by the username @my.data.not.yours, asked Amazon to send all data it has on her, including from smart speakers.
BEHIND VIRAL VIDEOS・19 HOURS AGO
The Independent

Follow live: PS5 stock UK – tracking live restock updates from all the major retailersThe PS5 has been out for nearly a year now and gamers are still struggling to get their hands on Sony’s newest console. Stock issues have plagued the PS5 ever since it launched last year, and the restock kerfuffle is still going on today.The sad tale began in November, when excited gamers tore open PS5 parcels that they had pre-ordered, only to find them replaced with cat food, a George Foreman grill and a bag of grain. Whenever more PS5s were made available, they were snapped up almost immediately,...
VIDEO GAMES・1 HOUR AGO
Variety

Netflix has long said it competes not just with other premium streaming services — like Amazon Prime Video, HBO Max or Disney Plus — but also other activities, including playing “Fortnite” and sleep itself. Now the company has shared a data point that illustrates this dynamic: According to Netflix, on Oct. 4, when Facebook, Instagram and the social giant’s other apps experienced a global outage that lasted about six hours, the service saw a 14% increase in engagement during the time Facebook’s services were down. “We compete with a staggeringly large set of activities for consumers’ time and attention like watching linear TV,...
BUSINESS・17 HOURS AGO
BigCountryHomepage

BestReviews is reader-supported and may earn an affiliate commission. Details. It’s a little bit more than just a display change The Nintendo Switch, a handheld gaming console first launched in 2017 and quickly became one of the fastest-selling devices. As of June 2021, almost 90 million units had been sold. This includes the 16 million units […]
VIDEO GAMES・1 DAY AGO

The latest Gismart release for Snapchat, Friends Quest, has been played by more than 4.8 million players since its launch in September. The real-time competitive multiplayer platform game was released as part of a multi-game partnership agreement signed earlier in 2021 with Snapchat. It was developed using PlayCanvas, a web-first...
VIDEO GAMES・1 DAY AGO
NEWS10 ABC

BestReviews is reader-supported and may earn an affiliate commission. Details. Sora has officially been revealed as the latest and possibly final character in the Super Smash Bros. Ultimate roster, and fans couldn’t be happier. The primary protagonist in the Kingdom Hearts series, Sora is the first Disney-owned character to make it into the Super Smash Bros. games. Many […]
VIDEO GAMES・1 DAY AGO
IndieWire

It’s been 20 years since the last original 2D entry in Nintendo’s classic science-fiction franchise, but “Metroid Dread” is exciting proof that one of gaming’s most well-known IPs still has plenty of life left in it. “Metroid Dread” is an expertly paced and satisfyingly challenging side-scrolling adventure bound to overjoy anyone who has ever liked moving a video game character to the left or right — even if the “Metroid” formula isn’t quite as fresh as it was several decades ago. A lack of innovation, especially compared to recent side-scrollers such as “Hollow Knight” and “Ori and the Will of the...
VIDEO GAMES・1 DAY AGO
The Independent

Super Smash Bros Ultimate: How to get Sora and everything to know about the final character

Nintendo’s best-selling multiplayer fighting game Super Smash Bros Ultimate is set to add its final character.The popular Switch game, first released in 2018, has augmented its character roster with a number of new fighters over the past few years.Now, the game is set to add its final character: Sora, the lead character of Kingdom Hearts.Here’s everything you need to know about when Sora is arriving on Smash and how to acquire him.In order to add Sora to their roster, players must have purchased the Fighters Pass Vol 2.The pass affords access to five other previously released charcters: Min Min...
VIDEO GAMES・1 DAY AGO

Netflix’ gauges that its latest megahit, ‘Squid Game’, will make just about 900 million dollars in incentive for the organization, as indicated by figures seen by ‘Bloomberg’, highlighting the windfall that one megahit can generate in the streaming time. In a confidential document checked on by Bloomberg News, Squid Game...
TV & VIDEOS・2 DAYS AGO
MarketWatch

‘Squid Game’ is worth nearly $900 million to Netflix: report

"Squid Game," which cost about $21 million to make, will generate exponentially more money by attracting and maintaining subscribers, according to a new report citing internal Netflix data.
TV & VIDEOS・2 DAYS AGO
Inverse

You need to play the decade's most ambitious game ASAP

Time makes fools of us all, especially game reviewers. Now that we’re nearly a year into a new console generation, the specters of the Spider-Men and Gods of War from the PlayStation 4 era cast smaller shadows. That means it’s time to embrace what a devoted legion of fans already know: Days Gone is actually pretty good.
VIDEO GAMES・3 DAYS AGO
psu.com

Final Fantasy XIV Has Topped 24 Million Players, Is The Series’ Most Profitable Game

Square Enix’s Naoki Yoshida revealed during a recent Final Fantasy XIV: Endwalker hands-on event that the MMORPG has surpassed 24 million players worldwide, making it by far the most profitable entry in the venerable franchise to date. The milestone was achieved 11 years after Final Fantasy XIV was originally released...
VIDEO GAMES・6 DAYS AGO
psu.com

DiRT 5 developer Codemasters has revealed in a job listing that it is beavering away on its “most ambitious and biggest” project in a decade. A job listing posted at the British developer reveals that it is on the hunt for a producer to join the studio “as they look ahead to their next project having delivered Dirt 5, the racing experience, that welcomed in the next-generation of consoles.”
VIDEO GAMES・9 DAYS AGO
CNET

It's been a quiet week for PS5 restocks so far. Last week saw multiple retailers having the hard-to-find console available, but this week is a different story. We're still looking for a PS5 restock from Walmart and Amazon, which haven't had consoles in some time. If you'd rather not refresh...
VIDEO GAMES・12 DAYS AGO
SlashGear

Today we’re taking a peek at rumored stores for Sony PlayStation 5 restock both online and in-person at brick and mortar stores. At the moment, reports of restocks are largely rumors, and an official release schedule has not yet been revealed by any one retailer. By the time you read this article, though, this may have changed!
VIDEO GAMES・15 DAYS AGO
CNET

One Amazon Prime perk goes away in less than a week. Here's what to know now

There's only one week left for Amazon Prime members to enjoy free Whole Foods' deliveries (on orders $35 or more). After Oct. 25, the free perk will cost $10 extra. It might mean that you buy more to offset the delivery cost or use Amazon's other free Prime grocery delivery options to avoid the extra fees.
INTERNET・18 HOURS AGO
Business Insider

The Qraft AI-Enhanced US Large Cap Momentum ETF (NYSE:AMOM), an exchange-traded fund driven by artificial intelligence, has highlighted its bullishness on the retail sector by including Target Corp. (NYSE:TGT) and two other retailers among its top-five holdings recently. What Happened: The ETF raised its stake in Home Depot Inc. (NYSE:HD)...
STOCKS・3 HOURS AGO
Business Insider

Amazon is offering up to $3,000 in signing bonuses as it tries to hire 150,000 seasonal workers. Here's where the jobs are concentrated.