Where election review efforts stand across the US

By Max Greenwood
The Hill
29 days ago 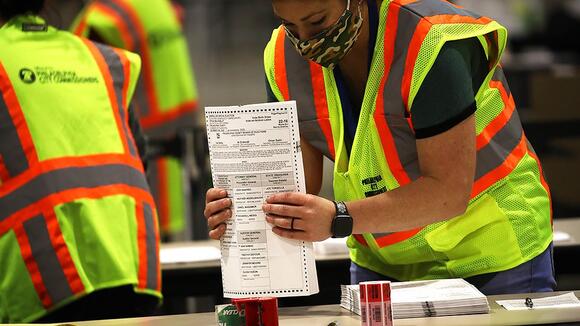 The controversial forensic audit of the 2020 election in Arizona's largest county may be over, but it has already inspired a number of copycat efforts in other states.

The months-long election audit in Maricopa County reaffirmed President Biden ’s win, and even expanded his margin of victory over former President Trump by about 360 votes, according to a report released Friday.

Still, Republicans in other states that helped Biden clinch the presidency have initiated their own Arizona-style election reviews in the face of pressure from Trump and his allies, who continue to insist without evidence that the 2020 election was tainted by widespread fraud and systemic irregularities.

Here’s where election review efforts stand across the country:

In the same vein as Arizona, Pennsylvania state Senate Republicans are planning to hire a contractor to lead the audit effort, which could drag on for months.

Critics of the audit say it’s little more than a partisan effort to further erode confidence in the election results. But state Republicans have touted the effort as a top priority, arguing that their constituents are genuinely concerned about the accuracy of the 2020 election.

The investigation backed by Vos is the highest-profile of the three. It’s being led by former state Supreme Court Justice Michael Gableman and carries a roughly $700,000 budget. Prior to the start of the investigation, Gableman visited the site of the Arizona election audit. He’s threatening to issue subpoenas to election officials who refuse to comply with his requests for information.

The attempted forensic audit led by Brandtjen, meanwhile, hit a roadblock after Vos refused to sign a subpoena to officials in two counties.

The nonpartisan election review by the Legislative Audit Bureau is perhaps the least controversial. Although it was ordered by the Republican-controlled state legislature, state Democrats have said that they believe the audit bureau will carry out its work responsibly. The bureau’s findings are expected sometime this fall.

Texas is in a league of its own insofar as Trump carried it by more than 5 percentage points last year. In contrast, Biden pulled off wins in Arizona, Pennsylvania, Wisconsin and Michigan.

The Texas secretary of state’s office announced Thursday that it would launch a “comprehensive forensic audit” of the election results in four of the state’s largest counties: Collin, Dallas, Harris and Tarrant. Of those four, only Collin County voted with Trump in November.

Michigan Secretary of State Jocelyn Benson (D) and local election officials have conducted multiple audits of the 2020 election, and none have found evidence of widespread fraud or security issues.

The call between Trump and Weiser was revealed by state GOP co-Chair Meshawn Maddock during a Republican picnic event. Per the Detroit News’s reporting, Maddock recalled that Weiser had told Trump that he’s going to "pay close attention to what happens coming out of Arizona.”

Such an audit would have to be initiated by the GOP-controlled Michigan state legislature. An earlier investigation of the 2020 election by the state Senate Oversight Committee found no evidence to back up Trump’s claims of widespread fraud.

State lawmakers, well-connected Republicans and Trump have pushed for Arizona-style audits and other 2020-related actions across the country for months as they look to lend credence to the former president’s claims of a stolen election.

Just last week, Trump penned a letter to Georgia Secretary of State Brad Raffensperger (R) urging him to consider “decertifying” the results of the 2020 election in the state, which Biden won by about 12,000 votes. Since then, Raffensperger has publicly reaffirmed Biden’s victory.

Obama hits the stump in US battleground Virginia

Former US president Barack Obama was due to campaign Saturday in a neck-and-neck state election touted as a bellwether of public opinion on Joe Biden's first year in the White House. "Look, there's a reason President Barack Obama is in Virginia right now.
VIRGINIA STATE・1 DAY AGO
News 8 WROC

Attorney John Scott will serve in the role on an interim basis, as his appointment will require confirmation by the state Senate for final approval.
PENNSYLVANIA STATE・1 DAY AGO
Newsweek

A number of Trump supporters on social media have also expressed confusion and disagreement with Trump's advice.
PRESIDENTIAL ELECTION・3 DAYS AGO

This Republican wants to start 'GOP 2.0' -- without Donald Trump

(CNN) — Something very interesting happened in New Hampshire this week that you might have missed: The Georgia Republican lieutenant governor made a trip to the state touting his plan to re-birth a post-Trump GOP. Dubbed "GOP 2.0," the plan is focused on a handful of pillars including national security,...
PRESIDENTIAL ELECTION・3 DAYS AGO
Newsweek

The St. Louis Post-Dispatch editorial board said the "shameful roster" is "once again running interference for a lawless ex-president."
PRESIDENTIAL ELECTION・1 DAY AGO
Newsweek

College Republicans at Washington & Lee University were told last month to take down materials in support of Virginia gubernatorial candidate Glenn Youngkin -- a move the university said was done to keep it in compliance with its non-profit status under the Internal Revenue Service (IRS). The Foundation for Individual...
PRESIDENTIAL ELECTION・1 DAY AGO

They called it the “command center,” a set of rooms and suites in the posh Willard hotel a block from the White House where some of President Donald Trump’s most loyal lieutenants were working day and night with one goal in mind: overturning the results of the 2020 election. The...
PRESIDENTIAL ELECTION・1 DAY AGO
Vice

Want the best of VICE News straight to your inbox? Sign up here. Shortly after the 2020 election, Texas Lt. Gov. Dan Patrick offered up to $1 million in reward money, to be paid out of his own campaign coffers, to “incentivize, encourage, and reward people to come forward and report voter fraud.” And now, the first person to claim that reward is Eric Frank, a progressive poll worker in Pennsylvania who reported a Republican for voting twice.
PRESIDENTIAL ELECTION・3 DAYS AGO
Vice

A Proud ‘Lady Trump’ Is Running For Nevada Governor

Want the best of VICE News straight to your inbox? Sign up here. Right-wing Las Vegas city councilwoman Michele Fiore jumped into the race for Nevada governor on Tuesday, with a video announcement featuring her shooting at beer bottles that say “CRT” and “vaccine mandates.”. Fiore, a Republican and former...
NEVADA STATE・4 DAYS AGO

A Democratic congressional candidate in Arizona on Sunday claimed Republicans were doing a "grave disservice" to communities by depicting the U.S.-Mexico border as a "place of crisis." During a virtual candidate forum on Zoom, Kirsten Engel criticized the "media and Republicans" for voicing concerns about the ongoing border crisis, saying...
U.S. POLITICS・3 DAYS AGO
KVUE

TEXAS, USA — Sen. Ted Cruz introduced legislation Tuesday to the U.S. Senate that would establish new ports of entry across the U.S. in response to the “man-made crisis on the South Texas border.”. The “Stop the SURGE Act” would also require migrants attempting to cross the border in Texas,...
TEXAS STATE・4 DAYS AGO
KTLA

The House voted Thursday to hold Steve Bannon, a longtime ally and aide to former President Donald Trump, in contempt of Congress for defying a subpoena from the committee investigating the violent Jan. 6 Capitol insurrection. In a rare show of bipartisanship on the House floor, the committee’s Democratic chairman, Mississippi Rep. Bennie Thompson, led the […]
CONGRESS & COURTS・3 DAYS AGO
Chico Enterprise-Record

CHICO — Chico Unified School District will hold a board meeting Wednesday evening regarding a draft of a trustee area map presentation. Chico is converting to a new election system, along with other government entities in California. Currently, Chico Unified School District board of trustees are elected through an “at-large”...
CHICO, CA・4 DAYS AGO

Where does North Carolina stand on the budget?

With more than three months into the new fiscal year, North Carolina still does not have a budget in place. Both the House and Senate have passed their versions but there is a new aspect of the process that hopefully Governor Roy Cooper will agree to so that a new budget will be passed by his administration.
POLITICS・8 DAYS AGO
redlakenationnews.com

On Friday October 8, the Standing Rock Sioux Tribe's (SRST) Election Commission hosted a hearing to hear complaints of potential irregularities in the general election results that was held on September 29, 2021. The general election was held throughout the Standing Rock Indian Reservation to elect a new tribal chairperson, vice chair and other tribal council positions.
PRESIDENTIAL ELECTION・13 DAYS AGO
Fox News

A new caravan with a reported 2,000 migrants is en route toward the United States as Border Patrol arrests reached their highest level in 35 years. President Biden has yet to visit the southern border as the Department of Homeland Security recently secured a contract to build a $456,548 tax-payer-funded security fence around the president's Delaware home.
POTUS・22 HOURS AGO
Newsweek

Stone said Dr. Anthony Fauci should be "prosecuted" while speaking at an anti-vaccination conference in Nashville.
NASHVILLE, TN・22 HOURS AGO