By Via AP news wire
The Independent
30 days ago 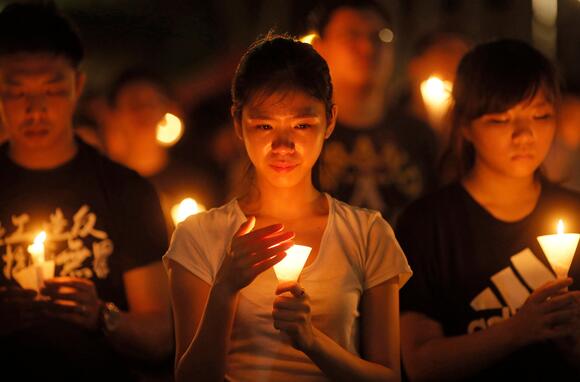 The Hong Kong group that had organized annual vigils in remembrance of victims of the Chinese military’s crushing of the 1989 Tiananmen Square pro-democracy protests voted to disband Saturday amid an ongoing crackdown on independent political activism in the semi-autonomous city.

Police had notified the Hong Kong Alliance in Support of Patriotic Democratic Movements of China last month that it was under investigation for working for foreign interests, an accusation the group denied.

While it called the probe an abuse of power, core members voted 41-4 at a meeting on Saturday to lay the 32-year-old group to rest. Tens of thousands of people had attended the annual vigil, until authorities banned it in 2020, citing anti-pandemic measures.

The law, which outlaws subversion, secession, terrorism and foreign collusion to interfere in the city’s affairs, has forced several civil organizations to disband or seen their ties to the government cut. More than 100 pro-democracy activists have been arrested under the law, including leaders of the Hong Kong Alliance, while other opposition figures have sought asylum abroad or been intimidated into silence.

In August, the prominent Hong Kong Civil Human Rights Front, made up of a slew of member organizations, said it could no longer operate and chose to disband. The group helped organize large protests in 2019, which grew increasingly violent as mostly young demonstrators battled police.

The annual vigil had honored those who died when China’s military violently suppressed massive pro-democracy protests in Beijing’s Tiananmen Square on June 4, 1989.

The topic has long been taboo in mainland China and Hong Kong had been the only place in the country allowed to hold such a commemoration. Smaller crowds gathered this year and in 2020 despite the police ban.

Police had asked the alliance to hand over any information about groups they had worked with overseas or in Taiwan — the self-governing island democracy China claims as its own territory — as well as contact information. They did not mention what specific incidents prompted the investigation.

Critics say the national security law restricts freedoms Hong Kong was promised it could maintain for 50 years following the territory’s 1997 handover to China from colonial Britain.

In an emailed statement, Amnesty International’s Asia-Pacific Director Yamini Mishra said “the effectively forced disbandment” of the alliance showed the Chinese authorities were seeking to censor all mention of the crackdown in Hong Kong as it has on the mainland.

“After the recent demise of some of Hong Kong’s largest unions and the group organizing some of the city’s largest protests, it is clear the Hong Kong government is targeting civil society groups with broad support and the capacity to mobilize," Mishra said. “Worryingly, the government’s crackdown on such organizations seems likely to continue."

Taiwan Vows to 'Defend Itself' Amid U.S. Reversal, Here's How Much Stronger China Is

"The complete reunification of the motherland must be fulfilled, and it will definitely be fulfilled," Ma Xiaoguang of China's Taiwan Affairs Office said.
FOREIGN POLICY・3 DAYS AGO
Fox News

After President Biden said at a CNN town hall last night he would defend Taiwan from an attack by China, the Chinese Foreign Ministry said there is "no room for compromise" on its territorial claims on the island. The latest trading of barbs between the U.S. and China over Taiwan...
FOREIGN POLICY・3 DAYS AGO
The Independent

Chinese billionaire Jack Ma, who has kept a low profile following China’s crackdown on his businesses, was reportedly spotted in Hong Kong recently.The co-founder of Alibaba group is currently staying in Hong Kong, Reuters reported, citing two unnamed sources. Ma met at least “a few” business associates over meals last week, the sources said.One such report also appeared in Hong Kong’s The Standard earlier this month. It had said that Ma was in the city on 1 October. The billionaire owns at least one luxury property in the former British colony where several of his business operations take place....
ECONOMY・12 DAYS AGO
Connecticut Post

HONG KONG (AP) — Hong Kong and mainland authorities have seized about $540,000 worth of smuggled Australian lobsters believed to be bound for the mainland, after China restricted imports of the crustacean amid escalating tensions with Australia. Hong Kong authorities said at a news conference Friday that its customs and...
CHINA・10 DAYS AGO

The Chinese publication said "the U.S. will become a historic sinner that further undermines world unity" by backing Taiwan at the United Nations.
FOREIGN POLICY・1 DAY AGO
ualrpublicradio.org

XINING, China — The Dongguan Mosque has adopted some very different looks in its nearly 700 years in China's northwestern city of Xining. Built in the style of a Chinese imperial palace, with tiled roofs and no domes, and adorned with Buddhist symbols, the mosque was nearly destroyed by neglect during political tumult in the early 20th century. In the 1990s, authorities replaced the original ceramic tiles on the roof and minarets with green domes.
RELIGION・1 DAY AGO
Business Insider

Russia and China's deepening ties have worried US officials, but some say Moscow should be worried about its increasingly powerful partner.
POLITICS・9 HOURS AGO
Business Insider

"If we can use stealthy ways, like underwater explosions, to destroy the ports, we can kill off the enemy's war potential," a Chinese officer said.
MILITARY・12 HOURS AGO

Huge crowds march in Sudan in support of civilian rule

Khartoum, Sudan (CNN) — Throngs of Sudanese protesters took to the streets on Thursday to voice their support for civilian rule within the country's power-sharing government. Demonstrators marched through the streets of the capital, Khartoum, chanting anti-military slogans and waving flags. Pro-civilian protests were also held in other Sudanese cities...
PROTESTS・4 DAYS AGO
AFP

Dozens of Hong Kong triad members have been arrested in a series of operations targeting gangs using high-powered speedboats to smuggle contraband to the Chinese mainland, police said Monday. On Monday, Hong Kong police said 365 people had been arrested in a series of joint raids over the last two weeks, including 35 men with triad backgrounds suspected of running the sea smuggling operations.
PUBLIC SAFETY・14 DAYS AGO
executivetraveller.com

Will Hong Kong ever fully reopen to travellers?

Even a single fatality from Covid-19 would be a major cause for concern, says the city-state’s Chief Executive Carrie Lam, underscoring the ultra-strict “Covid Zero” approach that has frustrated global businesses. In an interview with Bloomberg Television on Monday, Lam said she was “duty bound to protect my people” with...
LIFESTYLE・14 DAYS AGO
tripsavvy.com

The Top 9 Buffets in Hong Kong

The buffets in Hong Kong are impressive, and although pricier than their Vegas counterparts, many include lobster and fresh seafood brought in by the boats you see in the harbor. Buffets are big business in Hong Kong, and most upscale hotels offer one. The open kitchens allow skilled chefs to entertain guests as they prepare high-quality food. In many ways, buffet-style dining is an extension of the city's Dim Sum tradition.
LIFESTYLE・12 DAYS AGO
americanmilitarynews.com

This article was originally published by Radio Free Asia and is reprinted with permission. Tens of thousands of people have left Hong Kong in recent weeks amid a citywide crackdown on dissent, a new emphasis on patriotic propaganda in the education system and the jailing or disqualification of most of its political opposition.
CHINA・8 DAYS AGO
Benzinga

Alibaba Founder Seen Amid Activities In Hong Kong After One Year

Alibaba Group Holding Ltd (NYSE: BABA) founder Jack Ma, mainly out of public view since the regulatory clampdown, is currently in Hong Kong and has met business associates recently, Reuters reports. The visit marked his first trip to the Asian financial hub since October 2020. The Chinese billionaire maintained a...
BUSINESS・13 DAYS AGO
go955.com

HONG KONG (Reuters) – Hong Kong leader Carrie Lam fractured her right elbow after a fall at the official chief executive residence during the night and remains in hospital for observation, the Chinese-ruled city’s government said on Tuesday. “She attended the hospital by herself and was diagnosed with a minor...
CHINA・7 DAYS AGO
NBC News

The Best Face Mask for Air Travel in 2021.
ASIA・12 DAYS AGO
thepaypers.com

Singapore-based cross-border payments platform Instarem has announced that consumers and SMEs in Hong Kong can now send money to China in Chinese Yuan on their upgraded Instarem app. With the new currency introduced, users have the ability of sending money in either Hong Kong Dollar (HKD) or US Dollar (USD)...
WORLD・10 DAYS AGO
Marietta Daily Journal

A Hong Kong sculpture commemorating the 1989 Tiananmen Square crackdown is still standing after the deadline passed for its removal from a university campus, as China tightens its control over Asia’s main financial hub. The University of Hong Kong had ordered the towering, 2-ton "Pillar of Shame" to be removed...
CHINA・12 DAYS AGO
U.S. Department of State

On the Continued Erosion of Freedoms in Hong Kong

The United States remains seriously concerned at the continued erosion of human rights and fundamental freedoms, including political participation, in Hong Kong. We note in particular the increase in politically-motivated prosecutions, including through the National Security Law, targeting Hong Kong’s teachers, labor unions, lawyers, journalists, health care workers, student unions, and individual citizens. We again call on the Beijing and Hong Kong authorities to release those unjustly detained and cease their crackdown on peaceful civil society organizations. We once more urge Beijing to abide by its treaty obligations in the Sino-British Joint Declaration.
FOREIGN POLICY・4 DAYS AGO
The Guardian

M2r Education are working with a major organisation that need ESL Teachers for kindergartens across Hong Kong. Current positions are for ESL and Homeroom teachers for KG schools in Hong Kong on either a 1 or 2 year contract. Students are 2-6 years old. These roles are for male and female teachers.
WORLD・6 DAYS AGO