By Harry Latham-Coyle
The Independent
30 days ago 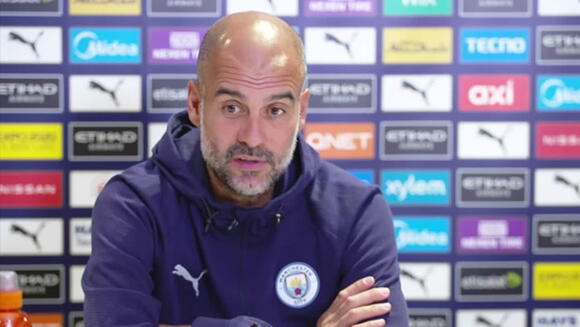 Manchester City enter a potentially crucial eight days early in their season as they visit Stamford Bridge to take on Chelsea.

The Premier League champions also face Paris Saint-Germain in the Champions League and host Liverpool domestically in the near future, with Pep Guardiola confronting an increasingly concerning injury list.

Ilkay Gundogan, John Stones, Aymeric Laporte, Oleksandr Zinchenko and Rodri have all had injury issues in the last couple of weeks.

There are fewer concerns for league leaders Chelsea, presumed by many to be the likeliest team to take the crown from Guardiola’s side, though Edouard Mendy is doubtful for Thomas Tuchel ’s side after missing their 3-0 win over Tottenham last weekend .

Here’s all the information you need to know ahead of the match.

The match will kick off at 12:30pm BST on Saturday 25 September.

This game will be live on BT Sport 1 with coverage beginning 11:30am. Subscribers can also stream it via the BT Sport website or app.

Edouard Mendy may be fit to return to the Chelsea side after missing out against Tottenham after suffering a knock in the Champions League fixture against Zenit St Petersburg, though Tuchel said it is “a race against pain and time” , and the German may be forced to call on deputy Kepa Arrizabalaga once more.

Manchester City rang the changes for Tuesday night’s Carabao Cup win against Wycombe Wanderers which means Pep Guardiola was able to rest many of his first-choice team, but the Spaniard is facing an increasingly concerning injury list. Rodri has a muscular problem and is a doubt while John Stones, Oleksandr Zinchenko and Aymeric Laporte were all also absent against Southampton last weekend.

Ilkay Gundogan has also suffered an issue ahead of eight days in which Manchester City will play Chelsea, Paris Saint-Germain and Liverpool.

Both sides have combined attacking potency with defensive solidity in a manner one would anticipate from two such expensively procured squads. Though Manchester City’s growing fitness issues may be a concern, they will hope to knock back a Chelsea side bidding to knock the defending Premier League champions from their perch — a draw seems the likeliest outcome. Chelsea 1-1 Manchester City

Team news, stats and prediction ahead of Brentford vs Chelsea in the Premier League on Saturday Night Football; kick-off 5.30pm. Brentford are without Shandon Baptiste for their first Premier League clash with west London neighbours Chelsea. Grenada midfielder Baptiste dislocated his shoulder during the Bees' 2-1 victory at West Ham...
PREMIER LEAGUE・12 DAYS AGO
chatsports.com

The final Premier League match of Saturday's action is the 'small' matter of a west London derby as newly-promoted Brentford host European champions Chelsea. Brentford are flying in the top flight at present, sitting in seventh, and are sure to give their title-aspiring local rivals are a tough game. Follow...
PREMIER LEAGUE・9 DAYS AGO
chatsports.com

Supporters always argue about which teams get the better of the VAR decisions in the Premier League, and this season we aim to give you the definitive answer. It's not just about the number of times a team gets a favourable VAR call or about how many goals are affected. What's more important is when these VAR decisions take place, how they might have changed the course of the game and, crucially, whether that impact would ultimately have changed the final score.
PREMIER LEAGUE・11 DAYS AGO
goal.com

The Team to Beat: Why Man City remain odds-on for the Premier League title

The reigning champions remain favourites to retain the title with SportsBettingDime.com. The Premier League is just seven games into the new season but the table is starting to take shape and Manchester City remain odds-on to retain their crown with SportsBettingDime.com. Pep Guardiola’s side now famously came up short in...
PREMIER LEAGUE・11 DAYS AGO

A winless Burnley travel to the Etihad Stadium to face champions Man City as the Premier League returns after the international break this weekend. Sean Dyche's side languish in the relegation zone after seven games, and they face fixtures against City, Chelsea and Tottenham in the space of the next month.
PREMIER LEAGUE・11 DAYS AGO
The Independent

Is Brighton vs Man City on TV tonight? Kick-off time, channel and how to watch Premier League fixture

One of the big clashes in the Premier League this weekend sees two top-four outfits meet, with Brighton hosting Manchester City.The Seagulls have impressed early on this year, suffering just one defeat so far and sitting fourth, though they have most recently drawn blanks against Arsenal and Norwich.Man City are third, just above their weekend hosts, and come into the game off the back of a five-goal showing in the Champions League against Club Brugge, which Pep Guardiola hailed as one of City’s best European performances of his tenure.The reigning champions are unbeaten in the league since the opening weekend...
PREMIER LEAGUE・2 DAYS AGO
whathifi.com

Leicester City vs Manchester United live stream and how to watch Premier League matches online and on TV, team news

Manchester United face a tough test today when they travel to the King Power Stadium to play Leicester City. The Foxes need to find form. Ole Gunnar Solskjær's side needs three points to stay in touch with title favourites Chelsea? Make sure you know how to watch a Leicester City vs Manchester United live stream wherever you are.
PREMIER LEAGUE・10 DAYS AGO

Manchester City vs Burnley preview: How to watch, team news, predicted line-ups and ones to watch

Burnley make the trip to Manchester City at the Etihad Stadium, with their recent record looming over their shoulders. The Clarets have a dreadful record over their opponents at The Etihad during the Sean Dyche era with the aggregate score in the last five visits in league and cup being 24-1 to the hosts.
PREMIER LEAGUE・10 DAYS AGO
Daily Mail

Sky Sports will show Chelsea's title race six-pointer with Liverpool on January 2 as the TV fixtures changes for the Christmas and New Year period were announced on Monday. Manchester City's trip to Arsenal on New Year's Day will be shown on BT Sport in the early kick-off, with the same broadcaster showing Liverpool's Boxing Day clash at home to Leeds.
PREMIER LEAGUE・7 DAYS AGO
BBC

Raheem Sterling is recalled to make only his third Premier League start of the season for Manchester City, who also hand a first club appearance of the campaign to defender John Stones. Sterling gets the nod in in a City attack missing the injured Ferran Torres and Gabriel Jesus who,...
PREMIER LEAGUE・9 DAYS AGO
Absolute Chelsea

Chelsea have had two of their Premier League matches in December moved following the decision to delay the FIFA Club World Cup. Their fixtures against Everton and Wolves in their festive schedule have both been pushed back a day. Thomas Tuchel's side were due to face Everton at Stamford Bridge...
PREMIER LEAGUE・4 DAYS AGO

Pep Guardiola’s men will hope to get back to winning ways in the Champions League when they go head to head against Belgian First Division Champions Club Brugge at the Jan Breydel Stadium. With only a one-point difference to the table leader after two games and having faced Paris Saint-Germain...
PREMIER LEAGUE・7 DAYS AGO
firstsportz.com

After registering a huge victory against Malmo in the Champions League fixture, Chelsea are set to turn their attention towards the Premier League. They face Norwich City at Stamford Bridge. Chelsea need a win to keep their title challenge. Ahead of the Chelsea vs Norwich City fixture, here is our preview, prediction and live streaming details.
PREMIER LEAGUE・4 DAYS AGO
The Independent

Brugge vs Man City prediction: How will Champions League fixture play out tonight?

Manchester City return to Champions League action this evening as last season’s defeated finalists travel to Belgium to face Club Brugge in Group A. Pep Guardiola’s side sit third in the standings after two rounds of matches following their opening win against RB Leipzig and defeat to Paris Saint-Germain last time out.FOLLOW LIVE: Brugge vs Man City – latest UCL updatesClub Brugge, meanwhile, come into tonight’s match one point ahead of City following their surprise draw against PSG at the Jan Breydel Stadium and victory over RB Leipzig in Germany. City beat Burnley 2-0 on Saturday thanks to goals from...
PREMIER LEAGUE・6 DAYS AGO
firstsportz.com

Chelsea absolutely demolished Norwich City in the Premier League on Saturday as they defeated them 7-0. Mason Mount was scoring for fun as he registered a hat-trick. Callum Hudson Odoi too found his name on the scoresheet with Reece James and Ben Chilwell getting one all. The Blues hardly felt...
PREMIER LEAGUE・2 DAYS AGO
Yardbarker

Just two points separate Pep Guardiola and Graham Potter's sides in the Premier League table ahead of the weekend meeting, with the Blues looking to avoid back-to-back defeats to the Seagulls for the first time. A stunning second-half comeback helped the South Coast side to an unexpected 3-2 win against...
PREMIER LEAGUE・3 DAYS AGO