By Harry Latham-Coyle
The Independent
28 days ago 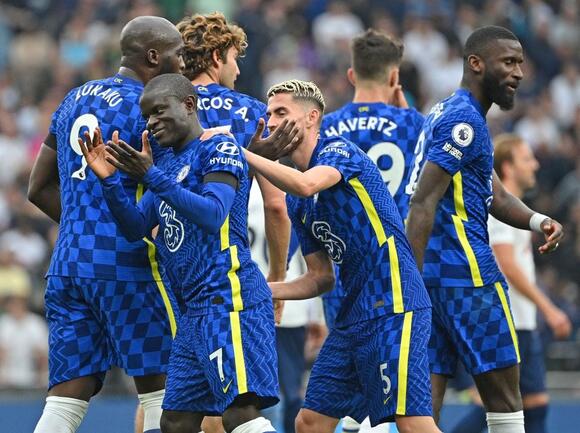 Premier League leaders Chelsea will be looking to make an early season statement of their title credentials as they welcome Manchester City to Stamford Bridge.

The defending champions travel to London after dropping two points in a surprisingly tepid draw with Southampton last weekend.

Chelsea overcame a tricky first half to produce a dominant second-half performance and blow away Tottenham Hotspur and Thomas Tuchel ’s side have looked in fine fettle so far in the young league season. Victory over the visitors would push them six points clear of Pep Guardiola ’s side.

Both clubs progressed in the Carabao Cup in midweek, with the Blues needing penalties to get past Aston Villa and Man City thrashing Wycombe.

Here’s all the information you need to know ahead of the match.

The match will kick off at 12:30pm BST on Saturday 25 September.

This game will be live on BT Sport 1 with coverage beginning 11:30am. Subscribers can also stream it via the BT Sport website or app.

Edouard Mendy may be fit to return to the Chelsea side after missing out against Tottenham after suffering a knock in the Champions League fixture against Zenit St Petersburg, though Tuchel said it is “a race against pain and time” , and the German may be forced to call on deputy Kepa Arrizabalaga once more.

Manchester City rang the changes for Tuesday night’s Carabao Cup win against Wycombe Wanderers which means Pep Guardiola was able to rest many of his first-choice team, but the Spaniard is facing an increasingly concerning injury list. Rodri has a muscular problem and is a doubt while John Stones, Oleksandr Zinchenko and Aymeric Laporte were all also absent against Southampton last weekend.

Ilkay Gundogan has also suffered an issue ahead of eight days in which Manchester City will play Chelsea, Paris Saint-Germain and Liverpool.

Both sides have combined attacking potency with defensive solidity in a manner one would anticipate from two such expensively procured squads. Though Manchester City’s growing fitness issues may be a concern, they will hope to knock back a Chelsea side bidding to knock the defending Premier League champions from their perch — a draw seems the likeliest outcome. Chelsea 1-1 Manchester City

Two teams at opposite ends of the table face each other in the Manchester City vs Burnley live stream. The game kicks-off at 3 p.m. BST (10 a.m. ET) on Saturday (October 16), as the home side look to continue their title challenge, while their opponents are already in a fight against relegation.
PREMIER LEAGUE・8 DAYS AGO
NJ.com

Pep Guardiola’s men came through a difficult three-game period right before the international break, with the defending champions securing four crucial points against title favourites Chelsea and Liverpool in the space of nine days. Manchester City, who sit third in the Premier League table with a two-point difference after seven...
PREMIER LEAGUE・7 DAYS AGO
CBS Sports

The Champions League is back in action on Paramount+. Make sure to check out all of our expert picks for this match and the rest of the day's action. Manchester City and Club Brugge will face off at 12:45 p.m. ET Tuesday, Oct. 19 at Jan Breydelstadion on Matchday 3 of the Champions League group stage. Man City is coming off of a 2-0 defeat to PSG. On the other hand, Club Brugge won 2-1 against RB Leipzig three weeks ago. Right now, Man City (three points) is in third place in Group A, while Club Brugge (four points) is in second place in the group behind PSG (four points). Recall that only the top two teams in the group will advance to the knockout phase.
UEFA・4 DAYS AGO

Pep Guardiola insists there will no thoughts of revenge in his head when he takes his Manchester City to Brighton on Saturday.City blew a 2-0 lead to be beaten 3-2 at the Amex last season after having Joao Cancelo sent off just 10 minutes into the match, in which Guardiola confronted Brighton boss Graham Potter who subsequently apologised for some over-zealous celebrations of his side’s opening goal.The defeat was a setback for City in the final weeks of their build-up to the Champions League final, but Guardiola said it had not been part of his thinking this week.“Absolutely not,” he...
PREMIER LEAGUE・3 HOURS AGO
Sports Illustrated

The Cityzens blasted past Club Brugge in Belgium with a 5-1 victory in the midweek Champions League game courtesy of a Riyad Mahrez brace and goals from Joao Cancelo, Kyle Walker, Cole Palmer. Pep Guardiola’s men are inches away from securing a spot in the Round of 16 of Europe's...
PREMIER LEAGUE・1 HOUR AGO

US Grand Prix live stream: How to watch Formula 1 race online and on TV

Lewis Hamilton had preparations for the US Grand Prix disrupted after he was locked in his Mercedes room.The British driver, who is currently six points behind title leader Max Verstappen, was late to his mandatory media session due to the incident.When the 36-year-old arrived, he explained: “Sorry I am late. I got locked in my room and I couldn’t get out. No joke”. Mercedes said the incident happened due to a faulty lock but they’ll be hoping there are no hiccups in the race on Sunday.A controversial pit stop at the Turkish Grand Prix saw Hamilton slip to fifth...
MOTORSPORTS・22 HOURS AGO
AFP

Manchester United, revived by their European escape act, face a stern test against bitter rivals Liverpool in a crucial clash in the Premier League title race this weekend.  United are already four points behind second-placed Liverpool after failing to win their last three league games and another slip against Jurgen Klopp's in-form side would be a major blow to their bid for a first English title since 2013.
PREMIER LEAGUE・1 DAY AGO
ESPN

The summer transfer window was unlike any other; see all the major deals and check out how we graded the biggest signings. And just because the window is shut until January, that doesn't mean the rumours won't keep coming. Here is the latest gossip and speculation. TOP STORY: Dembele open...
MLS・2 DAYS AGO
CBS Sports

The second winners of the UEFA Nations League will be crowned at the San Siro on Sunday as France and Spain square off for the crown, held by Portugal previously. The two sides came through thrilling semifinals against Italy and Belgium respectively to get their first opportunity to win this piece of silverware and with it establish themselves as real contenders for further honors with just over a year to go until the World Cup. Here is how you can watch the match and what you need to know:
UEFA・12 DAYS AGO

The Norwich City vs Brighton & Hove Albion live stream will see the high-flying Seagulls take on the struggling Canaries. The home side have yet to win a Premier League game this season, but getting that first victory against Brighton will be no easy task, as the south coast side are among the most in-form teams in the division.
PREMIER LEAGUE・8 DAYS AGO
Tom's Guide

Arsenal, led by forward Pierre-Emerick Aubameyang, faces Crystal Palace in an English Premier League match at Emirates Stadium in London, England, on Monday, October 18, 2021 (10/18/21). Fans can watch the match with a subscription to streaming service Peacock. Here’s what you need to know:. What: English Premier League. Who:...
PREMIER LEAGUE・4 DAYS AGO
Tom's Guide

Champions League action returns on Wednesday on Paramount+. Benfica and Bayern Munich will face off at 3 p.m. ET Wednesday, Oct. 20 at Estadio do Sport Lisboa e Benfica (da Luz) on Matchday 3 of the Champions League group stage. Benfica collected three points with a 3-0 win over Barcelona in their previous leg. Likewise, Bayern Munich won 5-0 against Dynamo Kyiv three weeks ago. Right now, Benfica (four points) is in second place in Group E, while Bayern Munich (six points) leads the group. Recall that only the top two teams in the group will advance to the knockout phase. Whoever wins will be on top of the group. Check back at CBSSports.com to keep track of this and all the UEFA Champions League events.
UEFA・3 DAYS AGO
Sports Illustrated

José Mourinho's side was delivered a thrashing for the ages by its Norwegian counterpart.
UEFA・1 DAY AGO
The Independent

Manchester United vs Atalanta prediction: How will Champions League fixture play out tonight?

Manchester United welcome Atalanta to Old Trafford in the Champions League tonight.United are chasing another victory after Cristiano Ronaldo’s last-gasp heroics in their previous European match against Villarreal.FOLLOW LIVE: Man United vs Atalanta – latest updatesThat result followed an opening defeat at Young Boys, which means Ole Gunnar Solskjaer’s side come into the third round of games in third place.Atalanta meanwhile are top with four points, and will prove stiff opposition.Here is everything you need to know.When is the match?Manchester United vs Atalanta is tonight, Wednesday 19 October, at 8pm BST.How can I watch it?The game will be shown live in the UK on BT Sport. Subscribers can stream online via the BT Sport app and BT Sport website. Confirmed line-upsManchester United: De Gea, Wan-Bissaka, Maguire, Lindelof, Shaw, McTominay, Fred, Greenwood, Fernandes, Rashford, RonaldoAtalanta: Musso; Zappacosta, Palomino, Demiral, Maehle; Freuler, De Roon, Pasalic; Ilicic, Koopmeiners; MurielOddsMan United 3/4Draw 3/1Atalanta 10/3PredictionUnited desperately need a victory to lift morale after a hammering at Leicester on the weekend, and have the firepower to get one here. Manchester United 2-0 Atalanta.
PREMIER LEAGUE・2 DAYS AGO