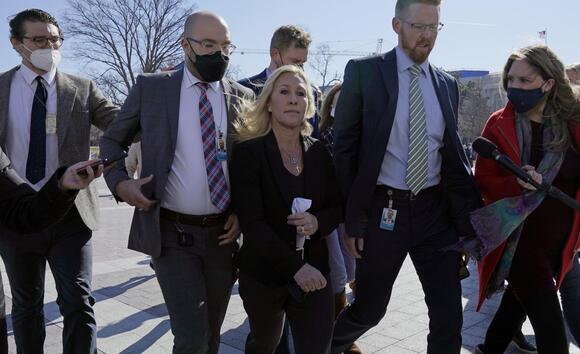 "I want to thank my Chief of Staff, Patrick Parsons, for helping me take the fight to the Socialist Democrats as I've transitioned into Congress," the Republican tweeted . "He's advised me he will be moving back into the political arena to help elect America First conservatives who can fight alongside me."

Greene has established herself as a conservative firebrand and vocal Trump supporter since becoming the representative for Georgia's 14th Congressional District in January.

In February, House Democrats stripped Greene of her committee assignments over her past incendiary statements and social media interactions. She has also made headlines for introducing multiple impeachment resolutions against President Joe Biden.

Parsons, a former gun-rights activist , said working with the first-term congresswoman was the highlight of his career.

"She asked me to come to Washington to help organize her office," Parsons said in a statement. "After eight and a half months fighting the Socialist Democrats and RINOs in D.C. it's time to move on."

Parsons added he could do more to fight the "communist Biden agenda" working on the outside rather than from inside Congress.

"Marjorie Taylor Greene is an America's First superstar who has become one of the leading policy-influencers in our party today," Parsons said. "She's shaken up Washington, D.C., stood up to the swamp and her own conference, disrupted business as usual and showed Republicans how to fight back and never back down."

Parsons concluded by saying he was looking forward to working with Greene in the future to "Save America" and "stop communism."

It was not immediately clear who would replace Parsons as chief of staff. The Washington Examiner reached out to Greene's office for comment.

Finally must have come to his senses and seen that Green was exposed to 6th January attack on our country and capital. Then was spreading lies and deceit and could be held accountable.

Seems like the Chief of staff didn't want to be in that barn anymore with Mrs. Ed so he left after they undid his bridle.

President Joe Biden made a number of false or misleading claims at a town hall event in Baltimore on Thursday as he attempted to sell his party's spending legislation.
BALTIMORE, MD・4 DAYS AGO
WashingtonExaminer

Georgia Republican Rep. Marjorie Taylor Greene this week is taking steps to build on her campaign to be a national voice for the America First movement, influence the 2022 elections and nudge the GOP congressional caucus to the right.
WASHINGTON, DC・7 DAYS AGO
Newsweek

It cites earlier rationale for rejecting claims in turning these new ones down. Here's the deal: President Joe Biden has rejected two additional requests by former President Donald Trump to shield sets of documents from the panel investigating the Jan. 6 insurrection, according to a new letter obtained by POLITICO.
PRESIDENTIAL ELECTION・23 HOURS AGO
Fast Company

Sometimes a denial can be just as damning as a straightforward admission. Other times, it can be even more so. Take, for instance, Georgia representative and Jewish space laser aficionado Marjorie Taylor Greene, whose response to a new bombshell Rolling Stone exposé about the Capitol Hill riots is more revealing than she perhaps intended.
POLITICS・1 DAY AGO
Business Insider

End Citizens United filed a complaint with the Federal Election Commission and the Office of Congressional Ethics over her leadership PAC activities.
CONGRESS & COURTS・6 HOURS AGO
Newsweek

"This makes my blood boil," Representative Grace Meng said of a report that her Republican colleagues helped plan the protest before the January 6 insurrection.
NEW YORK CITY, NY・1 DAY AGO

Marjorie Taylor Greene says Jan. 6 riot was in line with the Declaration of Independence

The GOP’s attempt to rewrite the history of the Jan. 6 Capitol riot has come full circle. Initially, pretty much everyone agreed it was very bad to violently try to overturn an American election. Then some Republicans said that it wasn’t an insurrection at all — and that most of the people who stormed the U.S. Capitol were something akin to overzealous, persecuted tourists exercising their constitutional rights.
CONGRESS & COURTS・4 HOURS AGO
Vice

A Pair of Jan. 6 Planners Just Rolled on Their Congressional Accomplices

Want the best of VICE News straight to your inbox? Sign up here. Arizona Republican Rep. Paul Gosar, a close ally of former President Donald Trump, reportedly floated a “blanket pardon” to two organizers of the January 6 pro-Trump rallies that descended into a violent attack on the U.S. Capitol.
CONGRESS & COURTS・1 DAY AGO
NBC News

WASHINGTON — The Senate confirmed two Republicans nominated by President Joe Biden to top diplomatic posts Tuesday. Former Arizona Sen. Jeff Flake was confirmed as U.S. ambassador to Turkey, and Cindy McCain, the widow of GOP Sen. John McCain of Arizona, will be the country's representative at the United Nations Agencies for Food and Agriculture.
CONGRESS & COURTS・2 HOURS AGO
Mic

It’s long been alleged that a cadre of the Republican Party’s more outwardly fascist ranks in Congress were somehow involved in the events leading up to the Jan. 6 insurrection attempt on Capitol Hill, although the exact degree to which lawmakers like Reps. Lauren Boebert (Colo.), Marjorie Taylor Greene (Ga.), and others helped foment the violence of that day has been somewhat unclear. Until now.
CONGRESS & COURTS・1 DAY AGO

Rep. Marjorie Taylor Greene, R-Ga., an outspoken opponent of masking and Covid-19 vaccination mandates, was fined Monday for a third time over her refusal to comply with House rules about face coverings. The House Ethics Committee published a notice saying Greene will have to pay a financial penalty for an...
CONGRESS & COURTS・1 DAY AGO
Newsweek

"If we decide to pull an insurrection, you're gonna know it," David Clarke warned.
PRESIDENTIAL ELECTION・2 DAYS AGO
Rolling Stone

EXCLUSIVE: Jan. 6 Protest Organizers Say They Participated in ‘Dozens’ of Planning Meetings With Members of Congress and White House Staff

As the House investigation into the Jan. 6 attack heats up, some of the planners of the pro-Trump rallies that took place in Washington, D.C., have begun communicating with congressional investigators and sharing new information about what happened when the former president’s supporters stormed the U.S. Capitol. Two of these people have spoken to Rolling Stone extensively in recent weeks and detailed explosive allegations that multiple members of Congress were intimately involved in planning both Trump’s efforts to overturn his election loss and the Jan. 6 events that turned violent.  Rolling Stone separately confirmed a third person involved in the main...
PROTESTS・1 DAY AGO
Insider

"The worst kept secret in America is that Donald Trump invited individuals to come to Washington on January 6," Rep. Thompson said Sunday.
CONGRESS & COURTS・2 DAYS AGO

President Joe Biden campaigns Tuesday in Virginia for the Democrats' beleaguered governor candidate Terry McAuliffe, whose slide in the polls has put the party on red alert for a Republican comeback in next year's midterm battle for Congress. On paper, McAuliffe, 64, should have a relatively easy run in a week's time. Already a former Virginia governor and seeking to replace the outgoing Democrat, he is the closest thing to an incumbent in a state where Biden trounced Donald Trump in the presidential election 12 months ago. Instead, Republican candidate Glenn Youngkin is tied with McAuliffe in the polls, eying a victory on November 2 that would energize his party's push to regain control of Congress in the 2022 midterms.
PRESIDENTIAL ELECTION・7 HOURS AGO
Register Citizen

PLAINFIELD — On a stage in front of more than 3,000 people waving Donald Trump and United States flags, U.S. Rep. Marjorie Taylor Greene said it reminded her of home. Greene, a Republican representative for Georgia, visited Plainfield on Saturday afternoon for the Quinebaug Citizens Alliance’s “America First Rally.”. “Who...
CONNECTICUT STATE・3 DAYS AGO
The Day

Plainfield — Flags displayed at the "America First" rally on Saturday took various forms, from attacks on President Joe Biden, to calls for former President Donald J. Trump's 2024 election, to an upside down stars and stripes signaling distress. The event sponsored by the Quinebaug Citizens Alliance drew a crowd...
PLAINFIELD, CT・2 DAYS AGO
mediaite.com

Jake Tapper blasted Rep. Marjorie Taylor Greene (R-GA) for her House floor tirade, suggesting she has “real issues.”. On Thursday, Greene and Rep. Liz Cheney (R-WY) got into a brief yet heated screaming match on the House floor during the Steve Bannon criminal contempt vote. Tapper, however, did not view...
CONGRESS & COURTS・4 DAYS AGO