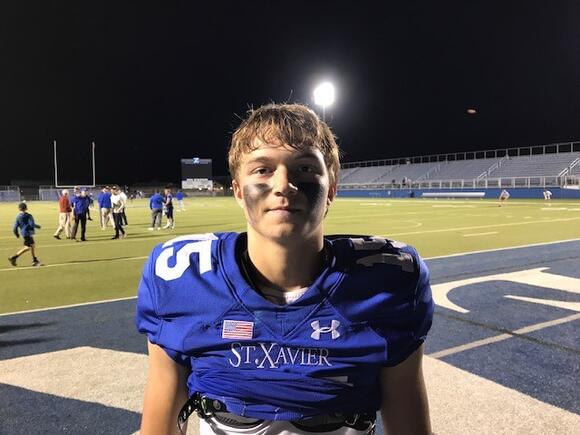 The Bombers (6-0), winners of 14 consecutive games going back to 2020, clinched at least a share of the Greater Catholic League South division title.

"We're in a great place right now. We really are," St. X coach Steve Specht said. "But, you can't rest on your laurels."

The Bombers, ranked No. 10 nationally by MaxPreps, had a running clock (30-point differential in the second half) for a fifth consecutive week and the sixth time in the past seven games going back to the end of the 2020 season.

They were all smiles after the game.

Senior quarterback Brogan McCaughey was 13 of 19 passing for 214 yards and three touchdowns. He has 156 pass attempts without an interception, according to St. X statistician Kelby Siler. McCaughey has thrown at least one touchdown in every game as a starter (2020 and 2021).

"(Brogan) is efficient," Specht said. "His efficiency is tremendous. The reality is, for three games he only played a half of football."

Senior Charles Kellom had 22 carries for 164 yards and two touchdowns. Kellom has rushed for 580 yards and 12 touchdowns this season.

"It's a lot of fun," McCaughey said. "The seniors – it's definitely a good year. We're focused on leaving no doubt, leaving everything on the field."

The game was tied at 14 with 8:27 left in the second quarter after Elder senior quarterback Ben Hambleton found senior tight end Mike Kirch for a 21-yard touchdown pass.

Kellom scored on a 1-yard touchdown run about five minutes later and senior Mason Rohmiller added a 27-yard field goal as time expired in the second quarter to give the Bombers a 24-14 lead.

Rohmiller's field goal was set up by Kellom's 73-yard run earlier in the drive.

Still, the Bombers weren't pleased with a number of penalties in the first half and fundamental mistakes.

"We kind of opened our eyes and saw what we were doing wrong," McCaughey said.

Senior Alex Kemper took the opening kickoff of the third quarter and went 99 yards for a touchdown to set the momentum in the second half.

"The first thing I thought was, 'Don't get caught,' because everyone would be clowning me if I got caught," Kemper said. "After that, nothing enters your mind. Just run as fast as you can."

Next week is the first of three consecutive home games for the Panthers. Elder coach Doug Ramsey said the team wants to improve upon special teams after Friday night.

"I told them I still think we are one of the better teams in Cincinnati," Ramsey said. "We just can't give good teams like X great field position, because we can't cover kicks. Two big returns killed us and then they just pinned their ears back on defense."

St. Xavier freshman water polo player Eli Frank was born with arthrogryposis, a condition that impacted the joints in his legs and somewhat in his arms. But, that hasn't hindered his passion to help the St. Xavier program this fall.
MONTGOMERY, OH・4 DAYS AGO
WCPO 9 Cincinnati