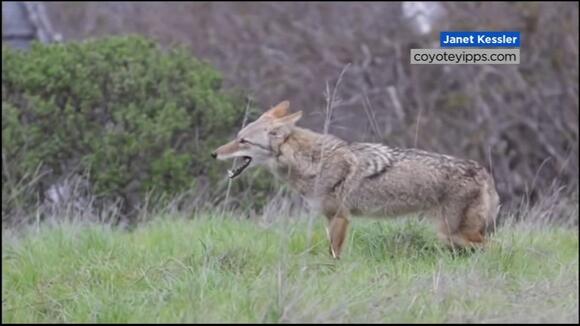 Over the past several months, the town of Danville has seen a string of coyote attacks on neighborhood animals. One of those attacks was on Rhea Saini's dog, Bella. "Literally a person of our family was taken from us and killed in front of our eyes," Saini said. PREVIOUS REPORT: Danville residents on high alert after string of coyote attacks The incident left Saini traumatized, but it's one that wildlife experts say could continue to happen, and even become more frequent. "This is in large part due to, well there's no other way to put it, drought basically," said Peter Flowers, of the Lindsay Wildlife Experience. He says as things like wildfires and droughts continue to worsen, that puts pressure on wild animals, forced to move out of their natural habitats and into places where they can find food and water. "They venture into areas where they feel they can find these items," Flowers said. VIDEO: Coyote wanders into California classroom and refuses to leave

A coyote entered a Californian Catholic school classroom in Northridge and refused to leave on the bookshelf behind the teacher's desks.

Flowers says coyotes generally don't attack humans -- something that's been a concern among Danville residents. "Children that are of an age that could be out walking on their own are generally too large for them. And the only time you're going to see something like that is if a coyote has something wrong with it such as a disease," Flowers said. For pet owners, Flowers also offered some tips. They include not feeding your animals outside, eliminating potential hiding spots for coyotes on your property, walking your dog with a normal, not retractable leash for better control, and even considering buying a coyote-proof vest for smaller breeds of dogs. RELATED: East Bay town to educate people on coyote safety after 5 attacks As for the town of Danville, they say they're very aware of the problem, with one town councilmember telling ABC7 in a statement: "We are working with Fish and Wildlife. They have asked us to report all incidents so a clear picture can be made on where the concentrations of coyote attacks are located in Danville. When this information has been received Fish and Wildlife can trap, relocate or euthanize the animal." It's a small relief for the family of Bella, who say something has to be done. "I don't want anyone to have to experience what we did, and I know it's happening often," Saini said.

'Hoping for rain': Bay Area prepares for 1st storm of the season this weekend

"The forecast should give us a reprieve." Many in the Bay Area are ready to greet the first rain of the season with open arms as soon as Sunday after a spring and summer filled with epic drought conditions. Fire crews hope the precipitation gives them a break from fighting wildfires.
NOVATO, CA・4 HOURS AGO
ABC7 News Bay Area

"We know that if our children stay home from school that that will impact the funding that schools will get for that day," said parent Babe Prieto, who supports the walkout. "And we want them to know that we're serious about not being forced to vaccinate our children."
SAN MATEO COUNTY, CA・13 MINUTES AGO
ABC7 News Bay Area

If everyone is fully vaccinated, and there aren't more than 100 people, masks won't be required in offices, gyms, indoor college classes, or religious gatherings in the counties.
SAN FRANCISCO, CA・1 DAY AGO
ABC7 News Bay Area

Some of the guidelines include wearing a mask indoors regardless of vaccination status and if you can gather outside.
ALAMEDA COUNTY, CA・1 DAY AGO

'Time is of the essence': Dry, gusty conditions fuel fires in San Jose

Monday afternoon's high winds are being blamed for spreading a couple fast moving fires in San Jose, at least one of which was threatening homes.
SAN JOSE, CA・5 DAYS AGO
ABC7 News Bay Area

'It's heartbreaking': California fires may have killed hundreds of giant sequoias

Northern California wildfires may have killed hundreds of giant sequoias as they swept through groves of the majestic monarchs in the Sierra Nevada, officials say.
CALIFORNIA STATE・8 DAYS AGO
ABC7 News Bay Area

You can add Halloween decorations to the list of things bears might snack on or in this instance, wrestle and maybe even steal.
ANIMALS・7 DAYS AGO