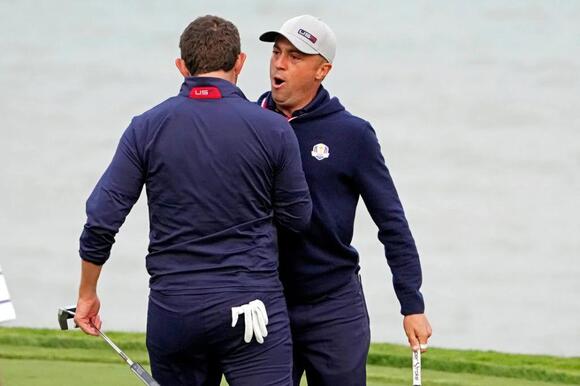 It was a strong start for the United States in the quest to regain the Ryder Cup, with the host team roaring out to 6-2 lead over Europe after Friday’s competition in front of a boisterous crowd at a wind-swept Whistling Straits along the shore of Lake Michigan in Sheboygan, Wis.

The United States started the three-day event by becoming just the eighth team with a lead of four or more points after the opening day. Only one of those previous seven teams – Europe in 1999 – failed to win the biennial event.

It was the largest Ryder Cup lead after the opening day in 46 years when the U.S. led by five in 1975.

The U.S. team of Dustin Johnson and Xander Schauffele topped Paul Casey of England and Bernd Wiesberger of Austria 2 and 1 for the first afternoon point in four-ball matches to highlight a dominating day. 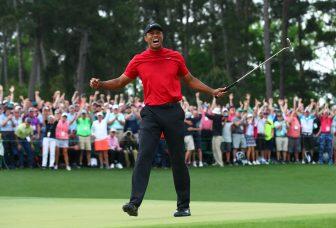 Hunter English and Tony Finau added to the U.S. lead, taking a point from Rory McIlroy of Northern Ireland and Shane Lowry of Ireland with a 4 and 3 decision.

A significant boost for the U.S. team came from Justin Thomas and Patrick Cantlay in the final match of what was nearly a 12-hour day. The duo was down three after eight holes against Tommy Fleetwood of England and Viktor Hovland of Norway, but never lost another hole, pulled even at 16 and earned the half point for a tie that resonated like a victory.

The U.S. needs to reach 14 1/2 points to recapture the Ryder Cup after Europe won in 2018. This current event was postponed from 2020 because of the COVID-19 pandemic.

The putting of Spain’s Jon Rahm was about the only thing that saved the European side from a larger deficit. The world’s No. 1 ranked player ended up earning 1 1/2 of Europe’s two points on the day. Rahm and Tyrell Hatton of England earned a tie with Scottie Scheffler and Bryson DeChambeau in the afternoon four-ball matches when Hatton made a birdie putt on the final hole.

Johnson and Collin Morikawa earned a 3 and 2 victory against Casey and Hovland before Cantlay and Schauffele completed a 5 and 3 rout of McIlroy and Ian Poulter of England. The U.S. team kept its lead when the morning matches wrapped up with Brooks Koepka and Daniel Berger defeating England’s Lee Westwood and Matt Fitzpatrick 2 and 1.

Europe was on top only briefly when Rahm and Sergio Garcia of Spain topped Thomas and Jordan Spieth 3 and 1.

Spieth managed to deliver the shot of the day in the loss with a chip up a steep embankment to set up a par putt at 17. Spieth lost his balance in the process and stumbled toward the lake before stopping his momentum. But his effort was not rewarded when Thomas missed the short putt as Rahm and Garcia wrapped up the match.

“Once I started moving, I was like, ‘I’ve got to keep moving until I find a flat spot,'” Spieth said.

Temperatures were around 50 degrees when both teams teed off for the morning rounds.

Saturday’s competition calls for the same combination of matches before 12 singles matches Sunday.

U.S. dominated at the Ryder Cup

This past weekend, at the much anticipated Ryder Cup golf event at Whistling Straits golf course in Wisconsin, the United States team was able to crush the European team by a record score of 19 to 9. They were able to use their driving distance advantage to win most of the par five holes, which has become very important in high skill level golf events these days. It also helped that on this course there is very little rough close to the fairways and this allowed them to freely use their driving distance strength advantage even if they missed the fairway. The European team also needed more help from Rory McIlroy, who disappointingly did not play well. For the US team, all of the players contributed to the victory. The best example was Dustin Johnson who went 5 and 0 on the weekend. The team captains for the US team did a very good job in their pairings for the US team. You could really tell that the players enjoyed the camaraderie, which has been lacking in previous years.
GOLF・14 DAYS AGO
USA TODAY Sports Media Group

Jim Furyk on U.S. Ryder Cup team's 'champagne problems': Hard to figure out who to sit.

The biggest problem when the U.S. Ryder Cup team captains convened in a room each day to discuss the next round of action?. There wasn’t a weak link. In a decisive victory, the U.S. topped Europe at Whistling Straits, 19-9, that’s the largest margin of victory since all of Europe joined the Ryder Cup in 1979. After two decades of being pummeled by Europe, the U.S. has now won two of the last three matches.
GOLF・14 DAYS AGO
Sports Illustrated

Who Should Be Next U.S. and European Ryder Cup Captains?

Longtime golf journalists John Hawkins and Mike Purkey, who co-host the Hawk & Purk podcast, also discuss and debate the game’s hottest issues in this weekly commentary. Let’s start here at home. Who should captain the U.S. Ryder Cup team in 2023 in Rome?. Hawk’s Take: Zach Johnson is the...
GOLF・14 DAYS AGO
chatsports.com

Shane Lowry was the animated spirit of a lackluster performance by Team Europe, which suffered a 19-9 loss at the 43rd Ryder Cup. One of the few bright moments for Europe was when Lowry holed an 11-footer on the final hole of his Saturday fourballs match to beat Tony Finau and Harris English. The Irishman pumped his fist in the air and dropped his putter while yelling in celebration.
GOLF・15 DAYS AGO

The 43rd 2020 Ryder Cup held at Whistling Straits in Kohler Wisconsin was well worth the wait. The United States of America won with a score of 19 to 9 over Europe. The PGA of America started the week on Monday 09/20/2021 with a Beyond the Greens presentation for the MKE Fellows and other Youth organizations from Milwaukee to learn about the game of golf.
MILWAUKEE, WI・13 DAYS AGO
GolfWRX

The planning and preparation that goes into being a Ryder Cup captain are well documented. However, Padraig Harrington was left to rue overlooking what ball each player played as his foursomes strategy was scuppered just two days before the event got underway at Whistling Straits. According to a report from...
GOLF・10 DAYS AGO
reviewjournal.com

Six golfers who played in the Ryder Cup were among the late entries for the Shriners Children’s Open, but three of the biggest names expected to play have chosen to skip the tournament. Reigning PGA Tour player of the year Patrick Cantlay, Collin Morikawa and Bryson DeChambeau failed to commit...
LAS VEGAS, NV・13 DAYS AGO
umlconnector.com

(Photo courtesy of apnews.com) All 12 players of the victorious U.S. team hoist the Ryder Cup. A young U.S. team defeated Europe in the biannual Ryder Cup this past Sunday with historic margins. Six of the U.S. players were rookies who all contributed to the dominating victory. Combined, they scored more points than all of Europe. For nine of the U.S. players, this was their first time winning a Ryder Cup. The Cup took place in the scenic 36-hole Whistling Straits course in Wisconsin. Golfers competed from Sept. 24 to Sept. 26.
WORCESTER, MA・10 DAYS AGO

It turns out the U.S. Ryder Cup captain nearly had to make a call to the bullpen for a reserve play ahead of Team USA’s resounding 19-9 victory over Europe. Tony Finau, one of Stricker’s six captain’s picks, came down with pneumonia the week before the biennial competition and feared he might have COVID-19. Finau participated in a charity fundraiser hosted by Tiger Woods at Liberty National in New Jersey on the Monday prior to Ryder Cup week and developed a cough.
GOLF・9 DAYS AGO
KDWN

No one knows exactly why this year’s U.S. Ryder Cup team was so dominant. Yes, they were the superior team on paper, but that is almost always the case, and in recent times Team Europe has had no problem outperforming expectations. The truth is many different factors led to the...
GOLF・8 DAYS AGO
outlooknewspapers.com

First published in the Oct. 2 print issue of the Glendale News Press. Collin Morikawa hoisted yet another prestigious trophy in the professional golf world on Sunday. The 24-year-old phenom, a La Cañada High School graduate who often trained at Chevy Chase Country Club, was part of a historic U.S. team that defeated Europe, 19-9, to claim the Ryder Cup in a dominant performance at Whistling Straits in Wisconsin.
GLENDALE, CA・10 DAYS AGO

Sam Burns is the most in-form player on the PGA Tour and he showed that yet again on Friday at the Shriners Hospitals for Children Open, carding a 63 to lie just one shot off the pace. By reaching 13-under-par, this equalled his second-best 36-hole score on tour. His best...
GOLF・7 DAYS AGO
chatsports.com

WEST CALDWELL, N.J. — Jin Young Ko had a three-stroke lead with four holes left Friday when second-round play in the LPGA Tour’s Cognizant Founders Cup was suspended because of darkness. Play was delayed 2 1/2 hours at the start because of fog, the second straight day that fog forced...
GOLF・7 DAYS AGO
USA Today

The Timuquana Country Club had a special guest star on Thursday. It was less than 18 inches tall and weighed four pounds. Steve Stricker walked into the clubhouse caressing it as if were a newborn and carefully placed it on a table overlooking the club’s back lawn. Welcome to Duval,...
GOLF・8 DAYS AGO
USA TODAY Sports Media Group

Europe's Viktor Hovland focuses on positives from 19-9 drubbing to the U.S. in Ryder Cup

LAS VEGAS – Viktor Hovland is not sulking. He isn’t breaking out in anger thinking about what might have been. He’s not kicking himself for not doing more. Yes, being on the losing side in his first Ryder Cup still stings, but the 24-year-old who is wise and mature beyond his years has chosen to soak up the positives instead of immersing himself in the negatives of Europe’s humbling 19-9 defeat to the U.S. two weeks ago in Wisconsin.
GOLF・8 DAYS AGO

Ian Poulter, Paul Lawrie and Stephen Gallacher are among the golfers to have paid tribute to well-known golf broadcaster and journalist Renton Laidlaw, who died on Tuesday aged 82. The veteran journalist, a former recipient of the Jack Nicklaus Memorial Award for golfing journalism, passed away at Ninewells Hospital in...
GOLF・2 DAYS AGO
reviewjournal.com

There was a little confusion earlier this week about exactly what was the course record at The Summit Club. Robert Streb put that discussion to rest on Thursday. Streb had a career best 11-under 61 to set the opening-round pace at the CJ Cup, coming out at a sizzling pace not seen on the PGA Tour in 14 years.
GOLF・1 DAY AGO
AFP

The men's and women's Australian Open golf tournaments fell victim to the coronavirus pandemic Thursday, with both cancelled due to travel restrictions. Golf Australia had already pushed back this year's men's event in Sydney from November to late January or February, but it has now been called off entirely. The women's 2022 tournament was due to be played in Adelaide in February, but that too has been canned. "The decision has not been made lightly but we believe it to be the right outcome under the current circumstances," said Golf Australia chief James Sutherland.
GOLF・2 DAYS AGO
UPI News

Oct. 8 (UPI) -- Ricardo Pepi, an 18-year-old rising soccer star for the United States Men's National Team, scored twice in the second half to lead the Americans to a shutout of Jamaica in a World Cup qualifier in Austin, Texas. Pepi scored in the 49th and 62nd minutes of...
MLS・7 DAYS AGO