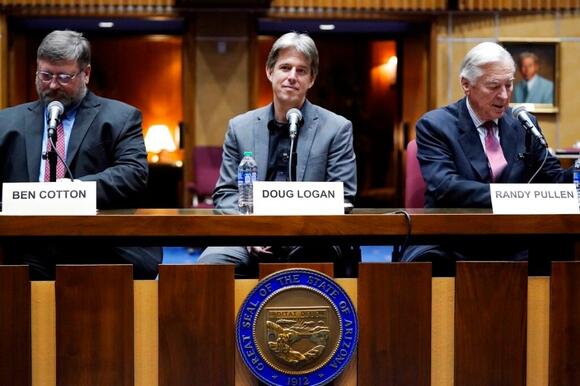 After six months of searching for evidence of fraud, the firm hired by Republican lawmakers issued a report that experts described as riddled with errors, bias and flawed methodology. Still, even that partisan review came up with a vote tally that would not have altered the outcome, finding that Biden won by 360 more votes than the official results certified last year.

The finding was an embarrassing end to a widely criticized, and at times bizarre, quest to prove allegations that election officials and courts have rejected. It has no bearing on the final, certified results. Previous reviews by nonpartisan professionals that followed state law have found no significant problem with the vote count in Maricopa County, home to Phoenix.

Still, for many critics, the conclusions reached by the firm Cyber Ninjas and presented at a hearing Friday, underscored the dangerous futility of the exercise, which has helped fuel skepticism about the validity of the 2020 election and spawned copycat audits nationwide.

“We haven’t learned anything new,” said Matt Masterson, a top U.S. election security official in the Trump administration. “What we have learned from all this is that the Ninjas were paid millions of dollars, politicians raised millions of dollars and Americans’ trust in democracy is lower.”

Other critics said the true purpose of the audit may have already succeeded. It spread complex allegations about ballot irregularities and software issues, fueling doubts about elections, said Adrian Fontes, a Democrat who oversaw the Maricopa County election office last year.

“They are trying to scare people into doubting the system is actually working,” he said. “That is their motive. They want to destroy public confidence in our systems.”

The review was authorized by the Republican-controlled state Senate, which subpoenaed the election records from Maricopa County and selected the inexperienced, pro-Trump auditors. On Friday, Senate President Karen Fann sent a letter to Republican Attorney General Mark Brnovich, urging him to investigate issues the report flagged. However, she noted the review found the official count matched the ballots.

“This is the most important and encouraging finding of the audit,” Fann wrote.

Despite being widely pilloried, the Arizona review has become a model that Trump supporters are pushing to replicate in other swing states where Biden won. Pennsylvania’s Democratic attorney general sued Thursday to block a GOP-issued subpoena for a wide array of election materials. In Wisconsin, a retired conservative state Supreme Court justice is leading a Republican-ordered investigation into the 2020 election, and this week threatened to subpoena election officials who don’t comply.

None of the reviews can change Biden’s victory, which was certified by officials in each of the swing states he won and by Congress on Jan. 6 — after Trump’s supporters, fueled by the same false charges that generated the audits, stormed the U.S. Capitol to try to prevent certification of his loss.

The Arizona report claims a number of shortcomings in election procedures and suggested the final tally still could not be relied upon. Several were challenged by election experts, while members of the Republican-led county Board of Supervisors, which oversees elections, disputed claims on Twitter.

Election officials say that’s because the review team is biased, ignored the detailed vote-counting procedures in Arizona law and had no experience in the complex field of election audits.

The review also checked the names of voters against a commercial database, finding 23,344 reported moving before ballots went out in October. While the review suggests something improper, election officials note that voters like college students, those who own vacation homes or military members can move to temporary locations while still legally voting at the address where they are registered.

“A competent reviewer of an election would not make a claim like that,” said Trey Grayson, a former Republican secretary of state in Kentucky.

The election review was run by Cyber Ninjas CEO Doug Logan, whose firm has never conducted an election audit before. Logan previously worked with attorneys and Trump supporters trying to overturn the 2020 election and appeared in a film questioning the results of the contest while the ballot review was ongoing.

Logan and others involved with the review presented their findings to two Arizona senators Friday. It kicked off with Shiva Ayyadurai, a COVID-19 vaccine skeptic who claims to have invented email, presenting an analysis relying on “pattern recognition” that flagged purported anomalies in the way mail ballots were processed at the end of the election.

“’Anomaly’ seems to be another way of saying the Senate’s contractors don’t understand election processes,” the county posted during the testimony.

Logan followed up by acknowledging “the ballots that were provided for us to count … very accurately correlated with the official canvass.” He then continued to flag statistical discrepancies — including the voters who moved — that he said merited further investigation.

The review has a history of exploring outlandish conspiracy theories, dedicating time to checking for bamboo fibers on ballots to see if they were secretly shipped in from Asia. It’s also served as a content-generation machine for Trump’s effort to sow skepticism about his loss, pumping out misleading and out-of-context information that the former president circulates long after it’s been debunked.

In July, for example, Logan laid out a series of claims stemming from his misunderstanding of the election data he was analyzing, including that 74,000 mail ballots were recorded as received but not sent. Trump repeatedly amplified the claims. Logan had compared two databases that track different things .

Arizona’s Senate agreed to spend $150,000 on the review, plus security and facility costs. That pales in comparison to the nearly $5.7 million contributed as of late July by Trump allies.

Two extra post-election reviews by federally certified election experts also found no evidence that voting machines switched votes or were connected to the internet. The county Board of Supervisors commissioned the extraordinary reviews in an effort to prove to Trump backers that there were no problems.

Mother, her boyfriend charged after boy’s skeleton found in Texas apartment with 3 other children

A mother and her boyfriend have been arrested and charged in the death of her 8-year-old son, whose skeletal remains were found inside a Houston-area apartment with his three apparently abandoned siblings.
TEXAS STATE・20 HOURS AGO
KFOR

A couple has been arrested in connection to a case where an infant's remains were found in the trash 30 years ago in North Carolina.
OKLAHOMA COUNTY, OK・1 DAY AGO
KFOR

A tornado tore across Interstate 10 in Orange, Texas Wednesday leaving a trail of debris and snapped power lines in its wake.
ORANGE, TX・12 HOURS AGO
Washington Post

Twitter may be maintaining its ban on Donald Trump, but the former president is finding other ways to get his message out. The Wall Street Journal on Wednesday published a lengthy letter to the editor from Trump charging, inaccurately, that the 2020 presidential election won by Joe Biden was “rigged.”
PRESIDENTIAL ELECTION・10 HOURS AGO

These Trump fans were at the Capitol on 6 January. Now they’re running for office

One of the candidates filmed himself on the Capitol steps. Another clambered over scaffolding and waved others forward towards the building. Still more were outside, milling around and protesting against the lawful election of Joe Biden. Of the thousands of diehard Trump supporters who gathered in Washington on 6 January,...
PRESIDENTIAL ELECTION・1 DAY AGO
Newsweek

The presentation will cover several elections in 2020 including the November presidential election, the sheriff's office said.
PRESIDENTIAL ELECTION・9 HOURS AGO
Newsweek

In mid-September, the Arizona Senate told the company to submit all of its records regarding its six-month election audit. The company submitted only 300 records.
PRESIDENTIAL ELECTION・7 HOURS AGO

WASHINGTON — The Senate confirmed two Republicans nominated by President Joe Biden to top diplomatic posts Tuesday. Former Arizona Sen. Jeff Flake was confirmed as U.S. ambassador to Turkey, and Cindy McCain, the widow of GOP Sen. John McCain of Arizona, will be the country's representative at the United Nations Agencies for Food and Agriculture.
CONGRESS & COURTS・1 DAY AGO
NBC News

WASHINGTON — A Republican secretary of state who challenged former President Donald Trump's false claims of election fraud in 2020 is the front-runner for a job heading the Biden administration's effort to protect future elections, according to people familiar with the discussions. Kim Wyman, 59, has led elections in Washington...
PRESIDENTIAL ELECTION・1 DAY AGO
Washington Post

President Donald Trump and those around him threw a multitude of voter-fraud conspiracy theories at the wall after the 2020 election. And few were as pervasive as the idea that people rose from the dead to help defeat Trump’s reelection bid. Unlike many of the often-nebulous claims, these ones carried...
PRESIDENTIAL ELECTION・2 DAYS AGO
The Week

Two people who helped plan the Jan. 6 rally in Washington that preceded the Capitol insurgency have begun sharing their knowledge with the House Jan. 6 committee, and they have "explosive allegations that multiple members of Congress were intimately involved in planning both [former President Donald] Trump's efforts to overturn his election loss and the Jan. 6 events that turned violent," Rolling Stone reported Sunday.
PRESIDENTIAL ELECTION・3 DAYS AGO

President Joe Biden may be looking to a Republican to head the US government’s future election security efforts, multiple news outlets have reported.According to the Associated Press, Mr Biden is considering the only GOP official to win a statewide election on the US west coast – Washington Secretary of State Kim Wyman – to lead election security at the Cybersecurity and Infrastructure Security Agency, a division of the Department of Homeland Security.Formed in 2018, Cisa gained widespread attention last November when then-Director Christopher Krebs publicly refuted then-president Donald Trump’s false claims that his loss to Mr Biden in last year’s presidential...
PRESIDENTIAL ELECTION・1 DAY AGO
POLITICO

It cites earlier rationale for rejecting claims in turning these new ones down. Here's the deal: President Joe Biden has rejected two additional requests by former President Donald Trump to shield sets of documents from the panel investigating the Jan. 6 insurrection, according to a new letter obtained by POLITICO.
PRESIDENTIAL ELECTION・2 DAYS AGO
POLITICO

Policy, politics and progressive commentary The narrative about a stolen election is completely fabricated. None of it is true. None of it happened. None of it, not in Arizona, not in Georgia, not anywhere, none of it. All “evidence” offered to support that narrative is likewise a mirage; it vanishes completely upon closer inspection. It’s just a fiction, a fiction […] The post Stolen 2020 election myth imposes loyalty test on Republicans appeared first on Nevada Current.
PRESIDENTIAL ELECTION・1 DAY AGO

Josh Mandel, a pro-Trump Senate candidate in Ohio, falsely claimed on Sunday that the 2020 election was stolen from former President Donald Trump. Mandel’s remarks came during an event hosted by the Center for Christian Values in Westerville, where six Republicans vying to be the GOP’s Senate nominee met for the first time.
PRESIDENTIAL ELECTION・3 DAYS AGO
Newsweek

"The only ones locked up were men like me, and others like me, that have stood by the president the strongest," said Couy Griffin.
POTUS・3 DAYS AGO
Newsweek

"There's no off-ramp for Donald Trump that is gracious and empowers other Republicans behind him," David Jolly said Sunday.
PRESIDENTIAL ELECTION・3 DAYS AGO
Newsweek