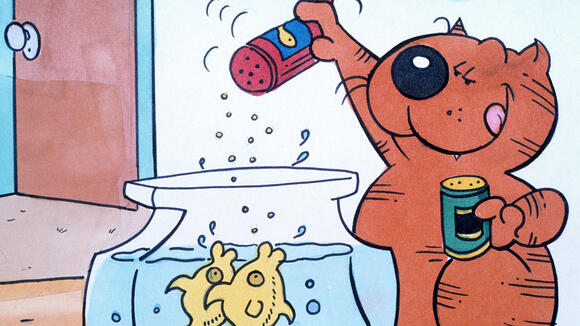 Move over Garfield , there’s a new cat in town. Or rather, the previous cat is back and looking to score the spotlight.

Legendary has picked up the feature and TV rights to Heathcliff , the comic strip featuring the cocky and street-smart cat about town, Heathcliff. The company plans to develop both simultaneously.

The strip was created by George Gately in 1973 and ran in thousands of newspapers at its height. It is now written and drawn by Gately’s nephew, Peter Gallagher. Gallagher will act as a producer with Steve Waterman, who has served as an exec producer on such family fare as 1999’s Stuart Little and the Alvin and the Chipmunks movies.

The strip was adapted into two cartoon series in the 1980s, one produced by Ruby-Spears Productions and the second by DIC Entertainment, with both featuring animation icon Mel Blanc in one of his last voice roles.

The feline also had his own Marvel comic in the ’80s. The title was launched in 1985 as part of Marvel’s family imprint Star Comics, which was later folded into the Marvel Comics line.

The comic strip has been in syndication for 32 years, in 20 languages and 57 countries. According to Legendary, it is currently published in over 1,000 newspapers and has more than 80 million daily readers.

Heathcliff ruled the funny pages in the late 1970s and 1980s with Garfield , another feline-focused strip. Garfield also birthed movies and animated series, most notably the big-screen works from 20th Century Fox in the early 2000s.

After a pandemic-impacted year where the BFI London Film Festival was, like so many others, forced to scale back much of its offerings with very limited in-person events and almost zero international guests, Wednesday night saw the U.K.’s biggest cinema event roar back to life. The Royal Festival Hall, on the banks of the River Thames and a new setting after the festival shifted from its traditional base in Leicester Square, was the location for the grand 2021 revival and where Regina King, Idris Elba, Jonathan Majors, Regé-Jean Page, Ted Sarandos, Jay-Z and, according to reports (she ducked the photographers), Beyoncé,...
MOVIES・20 DAYS AGO
The Hollywood Reporter

Every scene in Maya and the Three is a feast for the eyes. Deep golds, shimmering blues and fierce reds meld beautifully in this Netflix series about the adventures of a Mesoamerican teen who’s more interested in polishing her fighting skills than attending to her royal duties. Created by The Book of Life director Jorge Gutiérrez, Maya and the Three is a grand fantasy adventure told in nine chapters, beginning on the day of the feisty protagonist’s coronation as princess of the Teca Kingdom. The first episode, “Chapter 1: Quinceañera,” opens with Maya (voiced by Zoe Saldana) recounting a tale that...
TV SERIES・4 DAYS AGO
The Hollywood Reporter

Filmmaker Denis Villeneuve’s Dune opened atop the domestic box office on Friday with $17.5 million from 4,125 theaters. At this pace, the sci-fic epic should open to $35 million or more. The Legendary and Warner Bros. tentpole is launching simultaneously on HBO Max in the U.S. Friday’s haul, including $5.1 million in Thursday previews, was the best showing for a 2021 Warners title also opening on the streaming service. Imax theaters turned in $4.2 million, or 24 percent of Friday’s entire gross. Dune was a high-profile player on the fall film festival circuit and sits at 83 percent fresh on Rotten Tomatoes. Audiences gave it...
ENTERTAINMENT・3 DAYS AGO
Telegraph

Netflix secret codes: How to unlock thousands of hidden films and TV shows

Netflix's incredibly niche, personalised subgenres have long captivated movie nerds, from "Steamy Crime Movies from the 1970s" to "Period Pieces About Royalty Based on Real Life". The genres, based on a complicated algorithm that uses reams of data about users' viewing habits to recommend exactly what a particular user is...
TV SHOWS・26 DAYS AGO

5 New Netflix And Other Streaming Picks For This Weekend

Starring: Jake Gyllenhaal, Ethan Hawke, Paul Dano, Peter Sarsgaard, Riley Keough, Christina Vidal, Eli Goree, Da'Vine Joy Randolph. Jake Gyllenhaal has another Netflix movie ready. (He's already starred in Okja and Velvet Buzzsaw.) In The Guilty, Gyllenhaal plays an emergency operator who hears an abduction over the phone while covering the 9-1-1 line one night. The victim doesn't provide him with enough information to find her so he has to piece together clues to track her down. The film is an American remake of Gustav Möller's killer 2018 debut thriller of the same name.
MOVIES・25 DAYS AGO
Indiewire

The 7 Best Movies New to Netflix in October 2021

There’s a lot of decent stuff hitting Netflix in October: “Leon: The Professional,” “As Good as It Gets,” “A Knight’s Tale,” “Ghost.” But “decent” doesn’t cut it with IndieWire. There are also some outstanding titles coming to the service this month, and those are the ones we’re highlighting below. That...
TV & VIDEOS・25 DAYS AGO
FOXBusiness

Rose McGowan is weighing in on the ongoing controversy surrounding Netflix and Dave Chappelle's latest comedy special. The former "Charmed" actress took to Twitter on Thursday to criticize the streamer's "whiny" staffers who have spoken out against "The Closer," which saw the comedian make remarks that some viewed as offensive to the transgender community.
TV & VIDEOS・5 DAYS AGO
epicstream.com

John Boyega reportedly left everyone hanging during the production of his supposed Netflix film. Star Wars actor John Boyega is already no stranger to controversy and over the past year alone, the British-Nigerian actor was the subject of several news headlines following his much-talked-about battle with Disney and Lucasfilm over their treatment of BIPOC actors like him. That issue has already been resolved when he and Lucasfilm President Kathleen Kennedy had a serious discussion about his grievances.
MOVIES・4 DAYS AGO

One of the most mysterious titles in Marvel’s entire Phase Four lineup is Ant-Man and the Wasp: Quantumania. A sequel to 2018’s Ant-Man and the Wasp, the upcoming film will not only follow the Lang and Van Dyne families but also feature Jonathan Majors’ Kang the Conqueror in a prominent role.
MOVIES・14 DAYS AGO
TechRadar

While Squid Game still rides high on the Netflix charts, and as No Time To Die and Venom 2 bring the theatrical box office back to life, you might assume that the world of streaming is cooling off a little bit. Not so: this weekend sees the return of two major series in You and Succession, which have each taken two years to reach our screens again as a result of pandemic production challenges.
TV & VIDEOS・11 DAYS AGO
Popculture

Free Guy was one of the top movies of the summer, and fans can now watch it anytime they want as it's out on digital, Blu-ray and 4K ultra HD. Even though moviegoers enjoyed seeing Free Guy, the cast had just as much fun filming it. PopCulture.com recently caught up with Camille Kostek who plays Bombshell in Free Guy and revealed why her experience on set was something she will always remember.
NFL・11 DAYS AGO
Variety

Margot Robbie’s Barbie has seemingly found her Ken in Ryan Gosling. The two-time Oscar-nominee is in final negotiations to star in the upcoming Warner Bros. and Mattel film, directed by Greta Gerwig, who also co-wrote the script with Noah Baumbach. Robbie also does double duty on the project; in addition to starring as the iconic Mattel doll, she’s producing the movie under her LuckyChap Entertainment banner, which is coming off an Oscar-winning run for last year’s “Promising Young Woman.” Producers on “Barbie” also include LuckyChap’s Tom Ackerley and Josey McNamara; Mattel’s Robbie Brenner and Ynon Kreiz; and David Heyman. Plans to adapt Barbie’s...
MOVIES・4 DAYS AGO

What to Watch on Netflix Top 10 Rankings on October 22

The Netflix Top 10 list, which tells you which shows and movies are most popular on the platform, is a good place to start if you want to watch something everyone's talking about. The top 10 list on Friday, Oct. 22 ends a pretty same-y week over at Netflix on a similarly same-y note, with three hit shows -- You, Squid Game, and Maid -- continuing to hold on to the first 3 spots. Night Teeth, the Megan Fox-starring vampire movie, is the only real shake-up, moving up to the No. 4 spot today.
TV SHOWS・4 DAYS AGO
Variety

Welcome to this week’s “Just for Variety.” Wonder Woman approves of Robert Pattinson as the new Batman and Zoë Kravitz as Catwoman! “Rob looks amazing,” Gal Gadot told me last night at Elle’s Women in Hollywood event at the Academy Museum when I asked if she had seen the new “The Batman” trailer. “I love his voice and I love the whole tone of everything. “And I love Zoë. She looks incredible. She’s a sweetheart. She’s a talented woman,” she continued. “And I’m so happy to have another female as a comrade.” So when does Gadot think we’ll see an all-female superhero movie with...
MOVIES・6 DAYS AGO
103GBF

The numbers are hazy, but every time Dwayne Johnson or Netflix talk about Red Notice they call it the biggest or most expensive movie the streaming service has ever made. And the trailer... does look expensive. The film is essentially a cat-and-mouse-and-cat thriller about an FBI agent who teams with...
MOVIES・4 DAYS AGO
Popculture

Netflix Show Returns for Season 2, Instantly Rockets to No. 3 on the Top 10 Chart

The Locke siblings' return to Netflix was met with massive success. When Netflix unlocked the doors on Locke & Key Season 2 on Friday, Oct. 22, officially welcoming viewers back to the ancestral Keyhouse home, mass amounts of subscribers tuned in, helping the series land a spot on the streaming charts.
TV SERIES・13 HOURS AGO
tvseriesfinale.com

The Equalizer: Season Three? Has the CBS Crime Drama Series Been Cancelled or Renewed Yet?

Airing on the CBS television network, The Equalizer TV show stars Queen Latifah, Chris Noth, Lorraine Toussaint, Tory Kittles, Liza Lapira, Adam Goldberg, and Laya DeLeon Hayes. The story follows Robyn McCall (Latifa), an enigmatic woman with a mysterious background. She uses her extensive skills as a former CIA operative to help those with nowhere else to turn. To most, Robyn appears to be just an average single mom who is quietly raising her daughter (Hayes) and living with her aunt (Toussaint). However, to a trusted few, Robyn is The Equalizer, an anonymous guardian angel and defender of the downtrodden, who’s also dogged in her pursuit of personal redemption. Joining Robyn as champions of justice are her longtime friend and former CIA handler (Noth), an edgy bar owner and past colleague (Lapira), and a paranoid and brilliant white-hat hacker (Goldberg). As Robyn aids the oppressed and exploited, her vigilante work garners the attention of a shrewd NYPD Detective (Kittles). He once sought to uncover her identity, but now respects the need for Robyn’s type of justice, even as he often questions her methods.
TV SERIES・14 DAYS AGO
Laredo Morning Times

ZDF Enterprises (ZDFE) has acquired the international distribution rights to Spanish horror anthology “Stories to Stay Awake,” in Spanish “Historias para no dormir,” for all territories outside of Spain, Portugal, Italy and Latin America, which will be handled by series producer ViacomCBS International Studios. 50 years ago, Chicho Ibáñez Serrador...
MOVIES・14 DAYS AGO
SFGate