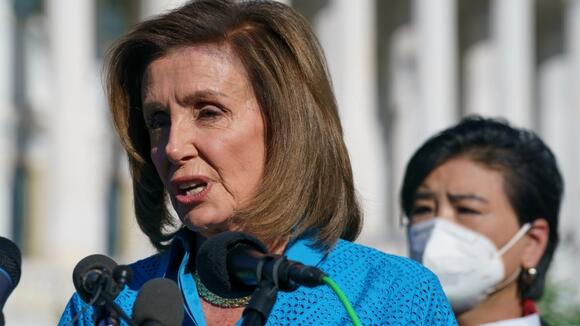 WASHINGTON (NEXSTAR) — The House on Friday passed an expansive abortion rights bill to protect and expand abortion access in all 50 states.

Democrats passed the historic legislation after they say the Supreme Court failed to stop a controversial anti-abortion bill in Texas.

“(The bill) will end the horrifying state level attacks on access,” Schakowsky said on the House floor.

She says the bill would be transformative for women and health care providers in Republican led states.

“Women are coming to the state of Illinois. All of the border states around us have limitations on access to abortion,” she said. “This is about freedom.”

The bill passed along party lines, with just one Democrat opposed.

Across the board, Republicans call the plan extreme.

“It would nullify the laws the Missouri has put in place to protect women and protect unborn babies,” Hartzler said. “It would allow for abortions at any stage.”

“This isn’t about freedom for women it’s about death for babies,” Hartzler said on the House floor.

She and Rep. Tim Walberg, R-Mich., say Democrats have gone too far.

“It ignores the reality that life is sacred,” Walberg said on the House floor.

The bill’s passage is largely symbolic. Senate Republicans have already vowed to block the measure.

But the issue isn’t going away. In December the Supreme Court will hear oral arguments over a restrictive Mississippi abortion law.

State of Oklahoma files appeal with U.S. Supreme Court to have stay of execution for John Grant vacated

An appeal filed with the U.S. 10th Circuit Court of Appeals by the attorneys of five death-row inmates, asking for a stay in their upcoming execution dates, has been granted for two of the inmates.
OKLAHOMA STATE・16 HOURS AGO
KFOR

A couple has been arrested in connection to a case where an infant's remains were found in the trash 30 years ago in North Carolina.
OKLAHOMA COUNTY, OK・1 DAY AGO
KFOR

Police do not believe that the "misidentification" between Brian Laundrie and his mother Roberta the week he went missing had a major overall impact on the investigation, a spokesman said Tuesday.
NORTH PORT, FL・1 DAY AGO
KXAN

The elections bill is the same bill that caused Texas House Democrats to flee the state and break quorum back during the first special session.
TEXAS STATE・1 DAY AGO

WASHINGTON (CBSDFW.COM) – Texas Democrats in Congress and the state legislature again urged the U.S. Senate to approve a federal elections bill. The legislation is called the John Lewis Voting Rights Advancement Act, and is named after the civil rights leader and Congressman who died last year. The U.S. House passed the measure in August in a very close, party-line vote. During a virtual news conference Tuesday, State Representative Chris Turner of Grand Prairie, who also serves as the Chair of the House Democratic Caucus said, “We’re calling upon the U..S. Senate to take immediate action to pass this very important bill and...
TEXAS STATE・1 DAY AGO
ABC 7 Chicago

The Illinois Senate voted Tuesday to repeal a law requiring that parents or guardians be notified when girls younger than 18 seek an abortion.
CHICAGO, IL・1 DAY AGO
WLNS

WASHINGTON DC (WLNS) – The US House of Representatives passed HR 4067 on Wednesday, which aims to strengthen the US’ cybersecurity. The Communications Security, Reliability, and Interoperability Council Act,  introduced by Reps. Elissa Slotkin (D-MI), Tim Walberg (R-MI), and Kurt Schrader (D-OR), would codify into law an FCC advisory council that makes recommendations on how […]
CONGRESS & COURTS・7 DAYS AGO

CNN — A group of House Democrats, led by Rep. Colin Allred of Texas, sent a letter to their Senate colleagues on Monday morning urging them to pass voting rights legislation known as the "Freedom to Vote Act" when it comes up for a vote this week. The legislation, which...
CONGRESS & COURTS・9 DAYS AGO
Austin Chronicle

Last night the Texas House of Representatives approved anti-trans student-athlete legislation, House Bill 25, which bans Texas K-12 students from competing on a school sports team that doesn’t align with their assigned gender at birth. The measure will now head to the Republican-majority Senate Committee on Health and Human Services,...
TEXAS STATE・12 DAYS AGO
KTEN.com

(KHOU/CNN) — A bill that restricts how transgender students participate in school sports is heading to the Texas Senate. It cleared the House during a special session on Thursday, and the Senate is expected to pass the measure. If House Bill 25 becomes law, Texas public school student athletes born...
CONGRESS & COURTS・12 DAYS AGO
arcamax.com

AUSTIN, Texas — After 10 hours of emotional, contentious debate, the Texas House voted Thursday night to block transgender athletes from competing in public school sports in their gender identity. Democrats forcefully, and sometimes tearfully, attacked House Bill 25 as a dangerous foray into discrimination that seeks to address a...
CONGRESS & COURTS・13 DAYS AGO

CHARLESTON, W.Va (Press Release) - For the first time in West Virginia’s 158-year history, members of the Republican-led West Virginia House of Delegates adopted a measure that would establish 100 single-member Delegate districts through the process of decennial redistricting. House Bill 301 was adopted Oct. 13 by a bipartisan vote...
CHARLESTON, WV・14 DAYS AGO
texassignal.com

At a press conference this afternoon, several Texas congressional and state Democrats called upon the U.S. Senate to pass the John Lewis Voting Rights Act. The Texas lawmakers noted the urgency of the moment: Greg Abbott has already signed a sweeping voter suppression bill as well as excessively gerrymandered redistricting maps.
TEXAS STATE・1 DAY AGO
The Independent

US Supreme Court Justice Sonia Sotomayor has warned that the impact of the high court’s latest refusal to block a ban on abortions at six weeks of pregnancy in Texas is “catastrophic”.The nation’s high court agreed to fast track a review of the law, with the court beginning arguments in the case on 1 November. But the ban will remain in effect, the court ruled on 22 October.Justice Sotomayor wrote in a seven-page opinion that she “cannot capture the totality of this harm in these pages” and criticised the court’s apparent flattening of constitutional rights protected under the landmark...
CONGRESS & COURTS・4 DAYS AGO
Reuters

(Reuters) - The U.S. House of Representatives on Friday passed a bill supported by the White House and major business groups that would extend workplace protections for nursing mothers to millions of workers. The House voted 276-149, with 59 Republicans joining every Democrat in the chamber, to advance the Providing...
CONGRESS & COURTS・5 DAYS AGO

COLUMBUS — A bill that could lead to a felony manslaughter charge against a doctor who fails to act to preserve the health of an infant born alive during the course of an abortion passed the Ohio Senate Wednesday solely with Republican votes.
OHIO STATE・19 HOURS AGO
Roll Call Online

The House is poised to split along partisan lines Thursday on whether to seek criminal charges against a private citizen for refusing to comply with a congressional subpoena, an outcome that threatens to further erode the investigative power of lawmakers from both parties. Republicans and Democrats have not shown much...
CONGRESS & COURTS・6 DAYS AGO
Fox News

Rep. Alexandria Ocasio-Cortez, D-NY., said that she will vote against her party's infrastructure bill if it comes to a vote Thursday because Democrats have not provided enough details on what will be in the larger social spending bill. "I don't see how ethically I can vote to increase U.S. climate...
PRESIDENTIAL ELECTION・14 HOURS AGO
everythinglubbock.com

AUSTIN (Nexstar) — A controversial bill that would require Texas public school student athletes to play sports based on their biological sex at birth passed on the House floor Thursday night. The amended legislation will now head to the Senate. Similar legislation has already died three times this year, but...
TEXAS STATE・13 DAYS AGO