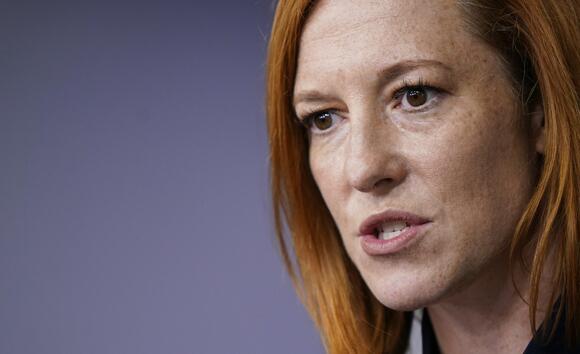 President Joe Biden will not use the powers of his office to shield Trump administration records from the purview of the Jan. 6 Select Committee.

"The president has already concluded that it would not be appropriate to assert executive privilege, and so, we will respond promptly to these questions as they arise and certainly as they come up from Congress," she continued. "We have been working closely with congressional committees and others as they work to get to the bottom of what happened on Jan. 6, an incredibly dark day in our democracy."

"It’s an eye to not exerting executive privilege," the top White House spokesperson stated. "Some of this is predicting what we don’t know yet, but that is certainly his overarching view."

Psaki's comments come one day after former President Donald Trump vowed to fight subpoenas from the committee for his communications on the day of and leading up to the Jan. 6 Capitol riot.

"The 'Unselect Committee' of highly partisan politicians, a similar group that perpetrated the now proven lie of Russia, Russia, Russia, Ukraine, Ukraine, Ukraine, Impeachment Hoax #1, Impeachment Hoax #2, and many other Scams, has sent out Harassment Subpoenas on Jan. 6th so that the Government of the United States can continue wasting time while Russia, China, and virtually every other country that deals with our Nation can continue to 'eat our lunch,' and laugh at the stupidity of what is going on at our Southern Border, and the worst withdrawal from a war zone by any Nation in history — all of this while the Democrats persecute and prosecute Republicans which is, together with Rigging Elections, essentially all they know how to do," Trump said in a statement. "We will fight the Subpoenas on Executive Privilege and other grounds, for the good of our Country, while we wait to find out whether or not Subpoenas will be sent out to Antifa and BLM for the death and destruction they have caused in tearing apart our Democrat-run cities throughout America."

You can watch Friday's entire briefing below.

"""Psaki later elaborated that on "principle," Biden would seek to avoid abusing executive privilege""" WELL THAT SHIP SAILED -THE FIRST DAY, AND CONTINUES.....

While your at it Finne to get Bidens notes on those Hunter dealings -the University won't release, I don't mind if ALL GO down to Federal indictments.

Former President Donald Trump reportedly called into a “war room” at the Willard hotel in Washington, D.C., on the eve of the Capitol riot on Jan. 6.
WASHINGTON, DC・21 HOURS AGO
WashingtonExaminer

President Joe Biden took part in the 2021 Association of Southeast Asian Nations summit on Tuesday morning and announced an investment worth up to $102 million to expand the United States's partnership with the group.
PRESIDENTIAL ELECTION・9 HOURS AGO
POLITICO

What Biden is keeping secret in the JFK files

The censored files may offer insights into Cold War covert ops, but don't expect a smoking gun about the assassination.
PRESIDENTIAL ELECTION・1 DAY AGO

"The only ones locked up were men like me, and others like me, that have stood by the president the strongest," said Couy Griffin.
POTUS・1 DAY AGO
Washington Examiner

Biden has been God's gift to Big Oil

President Joe Biden made tackling the "climate crisis" his central goal. Just one week into his presidency, Biden issued an executive order to "intensify international collaborations to drive innovation and deployment of clean energy technologies, which are critical for climate protection" and a number of actions to reduce or eliminate fossil fuel production and dependency at home. He appointed former Secretary of State John Kerry as his special presidential envoy for climate. He revoked permits for the Keystone XL pipeline to distribute Canadian oil to the United States but threw his support behind the Nord Stream 2 pipeline to transport Russian gas into Europe. He also offered continued U.S. encouragement for an existing pipeline scheme for the Taliban’s Afghanistan .
PRESIDENTIAL ELECTION・13 HOURS AGO
POLITICO

The president once more pushed back the scheduled release. But after 58 years, family members say the secrecy needs to end.
POTUS・1 DAY AGO
Newsweek

What Is Executive Privilege? Do Steve Bannon and Former Presidents Have It?

Trump and four former officials in his administration are refusing to comply with Congress' January 6 investigation by citing executive privilege.
POTUS・8 HOURS AGO

Rather than distance himself from a down-ballot race, the president has tied himself increasingly to it.
VIRGINIA STATE・12 HOURS AGO
POLITICO

It cites earlier rationale for rejecting claims in turning these new ones down. Here's the deal: President Joe Biden has rejected two additional requests by former President Donald Trump to shield sets of documents from the panel investigating the Jan. 6 insurrection, according to a new letter obtained by POLITICO.
PRESIDENTIAL ELECTION・1 DAY AGO
WashingtonExaminer

AUSTIN, Texas — Whether the Biden administration will be able to follow through on the Supreme Court’s order to restart a Trump administration program that made asylum-seekers temporarily live in Mexico will come down to whether Mexican President Andres Manuel Lopez Obrador allows it.
POTUS・13 HOURS AGO
WashingtonExaminer

WASHINGTON — The White House on Monday rejected another executive privilege request by former President Donald Trump over documents sought by the House committee investigating the Jan. 6 attack on the U.S. Capitol. In a letter obtained by NBC News, White House counsel Dana Remus told the National Archives that...
POTUS・23 HOURS AGO
northwestgeorgianews.com

In their first two months in the White House, President Joe Biden and Vice President Kamala Harris were practically inseparable — Harris traveled with Biden to the Pentagon, sat in the Roosevelt Room when he met virtually with a foreign leader and delivered her own remarks on the administration’s priorities.
PRESIDENTIAL ELECTION・12 HOURS AGO
WashingtonExaminer

A national reckoning on parental influence in schools could threaten to sway a key voting bloc that helped deliver victories up and down the ballot for Democrats in recent elections: suburban voters.
PRESIDENTIAL ELECTION・13 HOURS AGO
Washington Post

President Donald Trump and those around him threw a multitude of voter-fraud conspiracy theories at the wall after the 2020 election. And few were as pervasive as the idea that people rose from the dead to help defeat Trump’s reelection bid. Unlike many of the often-nebulous claims, these ones carried...
PRESIDENTIAL ELECTION・1 DAY AGO

President Biden is once again refusing to exert executive privilege over a tranche of documents former President Trump is trying to keep away from a special congressional committee investigating the January 6 insurrection at the U.S. Capitol. Mr. Trump has already filed a lawsuit to block the release of other...
POTUS・12 HOURS AGO
Fox News

McAuliffe gets 'agitated' when asked about panicking campaign, efforts to tie Youngkin to Trump: report

As the Virginia gubernatorial election draws closer, the campaign for Democratic candidate Terry McAuliffe appears to be growing more nervous. On Sunday, Axios spoke with McAuliffe regarding his campaign and noted that his attitude "has taken on an air of tension — bordering on panic." For instance, his staff informed...
PRESIDENTIAL ELECTION・1 DAY AGO
The Independent

President Joe Biden may be looking to a Republican to head the US government’s future election security efforts, multiple news outlets have reported.According to the Associated Press, Mr Biden is considering the only GOP official to win a statewide election on the US west coast – Washington Secretary of State Kim Wyman – to lead election security at the Cybersecurity and Infrastructure Security Agency, a division of the Department of Homeland Security.Formed in 2018, Cisa gained widespread attention last November when then-Director Christopher Krebs publicly refuted then-president Donald Trump’s false claims that his loss to Mr Biden in last year’s presidential...
PRESIDENTIAL ELECTION・8 HOURS AGO
Reuters

WASHINGTON (Reuters) - U.S. President Joe Biden has blocked a second attempt by former President Donald Trump to withhold documents sought by lawmakers investigating the deadly Jan. 6 attack on the U.S. Capitol and ordered the latest batch to be handed over to Congress. “Biden has determined that an assertion...
POTUS・9 HOURS AGO