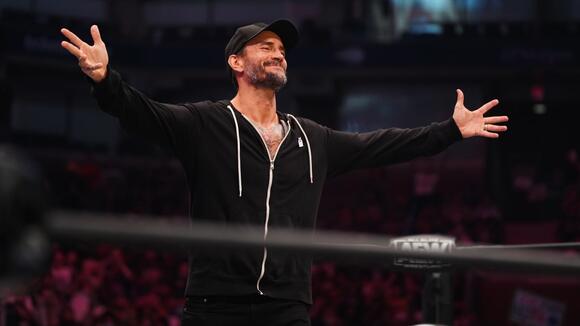 “This is my Lazarus Pit, this is my fountain of youth and I’m going to wrestle the young guys as long as I can.”

CM Punk will step into a wrestling ring on cable television Friday night on Rampage . Maybe 2021 isn’t so bad after all.

Punk, who made his AEW debut last month in Chicago, had his first match with the company at All Out on Sept. 5 against Darby Allin. His match against Powerhouse Hobbs will be his first on cable TV since he defeated Billy Gunn on the Jan. 20, 2014, episode of Raw .

AEW continues to infuse new life into professional wrestling, with Punk at the forefront. And not only is he back in wrestling on a weekly basis but he is also living up to his vow to make the industry a better place—which he does in a number of ways, especially highlighting young, emerging stars.

Punk helped shine a brighter spotlight on Allin at All Out than he ever had in his career, and the opportunity will be the same for Hobbs on Rampage .

“The naked eye shows these guys are oozing with potential,” Punk says. “The list of young guys like that in AEW is staggering. For so long, I saw people in an office position and go, ‘This is the guy,’ instead of saying, ‘These are the people.’ That’s the animus of wrestling Powerhouse Hobbs or Darby Allin, and I think Brian Pillman Jr. is another one of those guys. They have this raw charisma; they have ‘it.’ That’s been lacking in our industry for so long, and AEW is capitalizing on all of that star power.”

Phil Brooks (aka Punk) is a creative individual, with a gift of storytelling. Even after seven years away from pro wrestling, he remains a creative virtuoso, which will be visible in Friday night’s match against Hobbs.

“Selfishly, I want to wrestle Powerhouse Hobbs,” Punk says. “It just looks like fun. What he does can really fit with what I do. So to harness that potential and feel the crowd, and feel the youthful exuberance. This is my Lazarus Pit, this is my fountain of youth and I’m going to wrestle the young guys as long as I can.”

Punk and Hobbs is a clash of the past and future, meeting in the present at wrestling’s newest oasis in AEW.

“If you want to watch cool pro wrestling, that’s what this is,” Punk says. “If you like hard-hitting, a---kicking action, watch the whole show. If you love pro wrestling, then watch. We’re going to go out there and beat the s--- out of each other.”

Charlotte Flair Escorted Out Of Building By Security After WWE SmackDown

Charlotte Flair and Becky Lynch had a confrontation backstage and it was not a pretty sight. Things did not get physical, but a shouting match did ensue. This was followed by a request for Flair to leave the building before The Man’s dark match was over. New information indicates that The Queen might not have left on her own volition.
WWE・3 DAYS AGO
CBS Sports

After starting his professional career with seven consecutive wins, five by knockout, Evan Holyfield was back in action on Saturday night, battling Charles Stanford on the undercard of the event headlined by Shakur Stevenson vs. Jamel Herring. It took Holyfield, son of legendary boxer Evander Holyfield, slightly more than one...
COMBAT SPORTS・2 DAYS AGO
wrestlingrumors.net

SmackDown Star Out Of Action Due To Medical Issue

That would slow him down. The 2021 WWE Draft has come and gone and there were several changes made over the course of two nights. All kinds of wrestlers were moved from one show to another and we have now seen some of the moves become finalized as wrestlers have showed up on their new rosters. However, one of them will not be getting in the ring anytime soon for a good reason.
WWE・1 DAY AGO
stillrealtous.com

WWE has released a number of talents so far in 2021, and one of the names who happened to get released back in June was none other than former WWE Cruiserweight Champion Tony Nese. Tony Nese made an appearance during this week’s episode of AEW Dynamite, and on Sunday he...
WWE・2 DAYS AGO

Former WWE star Tony Nese, who was released from the company on June 25th 2021, was in attendance at the October 23rd 2021 edition of AEW Dynamite. Nese was shown in the crowd during the Bryan Danielson vs. Dustin Rhodes match that kicked off the show. On commentary, Nese was referred to as “one of the hottest free agents” in wrestling.
WWE・2 DAYS AGO
MMAmania.com

It’s been nearly a year since Mike Tyson stepped into the boxing ring against Roy Jones Jr. in a fight that made a whole lot of money for everyone involved. That didn’t stop Tyson and his then-promotional partner Triller from splitting and getting into a legal fracas that may be delaying “Iron Mike” from scheduling another ‘super exhibition’ bout.
COMBAT SPORTS・23 DAYS AGO
wrestlinginc.com

Bobby Lashley has been pulled from a Cricket Wireless autograph signing today in Houston, Texas. WWE announced that Lashley was being replaced by The Street Profits at the Meet & Greet. No reason was given for the change, but it was noted that Lashley is unable to attend. Lashley has...
WWE・1 DAY AGO
wrestlingrumors.net

Meet the new one. AEW has put together quite the roster over its history and part of that is due to bringing in new wrestlers here and there. Sometimes you need to add in some fresh blood, which is what AEW often does well. You can get those wrestlers from a variety of places and now it seems that they are at least interested in bringing in someone who used to wrestle elsewhere.
WWE・2 DAYS AGO

John McCarthy has ripped Daniel Cormier over his comments about Fedor Emelianenko. The former UFC light heavyweight and heavyweight champion, Cormier, recently said on his YouTube channel that he thought had Emelianenko signed with the UFC, he would’ve been average at best. Those comments took many by surprise, including John McCarthy, who proceeded to rip ‘DC’ for for his controversial take.
UFC・23 HOURS AGO
ringsidenews.com

Mandy Rose admits that she got famous thanks to her art of selfie taking. She is also quite advanced in the art of thirst trap photos, and this post is no different. Halloween Havoc is coming up on October 26th, and Mandy Rose had a very important question to consider while she prepares for an NXT Women’s Title match.
WWE・22 HOURS AGO
FOX Sports Radio

WWE Women's champions Becky Lynch and Charlotte Flair were reportedly involved in a "backstage confrontation" after a segment on Friday Night SmackDown.
NFL・1 DAY AGO
stillrealtous.com

WWE has released quite a few names this year, and you never know when a familiar face might pop up on AEW programming. Over the weekend fans saw former Cruiserweight Champion Tony Nese make an appearance on Dynamite, and Nese also made his in-ring debut with All Elite Wrestling at the AEW Dark tapings at Universal Studios.
WWE・6 HOURS AGO

Aubrey Edwards on Finding Out She Would Referee CM Punk vs. Powerhouse Hobbs

– During an interview with the Danger Zone podcast, AEW referee and Unrestricted host Aubrey Edwards discussed refereeing CM Punk vs. Powerhouse Hobbs at AEW Dynamite Grand Slam. This was CM Punk’s first wrestling match on TV in over seven years after he had recently returned to the ring at AEW All Out on PPV against Darby Allin. Below are some highlights (via Fightful):
WWE・12 DAYS AGO
411mania.com

In an interview with My Mom’s Basement (via Fightful), CM Punk questioned the creation of new titles for AEW and said that he’s not sure if the company has the depth to do it. Here are highlights:. On creating secondary titles in AEW: “Yeah. 100% I think if everybody has...
WWE・12 DAYS AGO
ringsidenews.com

CM Punk left WWE back in 2014 after the Royal Rumble pay-per-view and since then he vowed never to step foot inside a pro wrestling ring ever again. Of course, he broke his promise as Punk debuted on AEW Rampage: The First Dance. He was in talks with AEW for quite a long time too.
WWE・12 DAYS AGO
stillrealtous.com

Roman Reigns Rips On CM Punk And The AEW Roster

Fans waited 7 long years for CM Punk to return, and he finally got back in the ring when he defeated Darby Allin at the AEW All Out pay-per-view last month. CM Punk’s return got a lot of people talking, and he’s been making regular appearances on AEW programming in recent weeks.
NFL・11 DAYS AGO
411mania.com

Kevin Owens took to Twitter today and gave thanks to his supporters following last night’s WWE RAW main event. Owens is now a member of the RAW roster once again as WWE Draft changes have gone into effect. Last night’s RAW was headlined by Owens vs. Seth Rollins vs. Rey Mysterio vs. Finn Balor in a Fatal 4 Way Ladder Match to determine the next challenger to WWE Champion Big E. Rollins ended up winning the match, but fans on social media rallied for Owens, hoping that this latest run on the red brand will lead to a title push.
WWE・6 HOURS AGO
411mania.com

CM Punk Is Excited to See AJ Mendez Working With WOW, Encouraged Her To Talk To Jeanie Buss

CM Punk is looking forward to seeing AJ Mendez working on WOW – Women of Wrestling, and recalled encouraging her to take the meeting with Jeanie Buss that led to the job. As previously reported, the former AJ Lee will be an executive producer for the promotion’s show and will provide color commentary when it arrives next fall.
WWE・13 DAYS AGO