'Yes, I wept’: AOC explains why she cried over Iron Dome vote

By Kate Scanlon
WashingtonExaminer
24 days ago 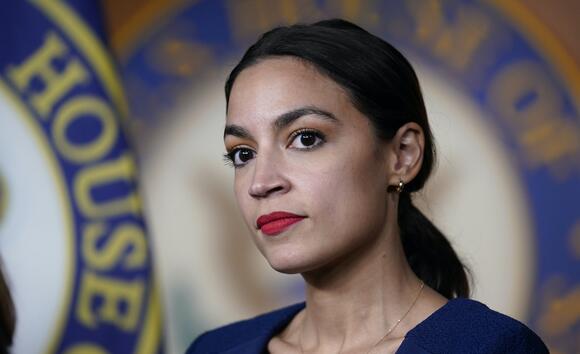 R ep. Alexandria Ocasio-Cortez sent a letter to her constituents Friday explaining why she wept during a House vote this week on a stand-alone provision to fund Israel's Iron Dome missile defense system.

The House voted overwhelmingly on Thursday to approve the Iron Dome provision after Democratic leadership was forced to pull it from a broader spending bill because lawmakers from the party's progressive wing objected, including Ocasio-Cortez’s fellow members of “the Squad”: Reps. Rashida Tlaib, Ilhan Omar, and Ayanna Pressley. Tlaib accused Israel of human rights abuses and war crimes during Thursday’s debate on the House floor.

During the vote, Ocasio-Cortez changed her vote from 'no' to 'present' and appeared to be in tears on the House floor, which she confirmed in her Friday letter.

“Yes, I wept,” Ocasio-Cortez wrote. “I wept at the complete lack of care for the human beings that are impacted by these decisions, I wept at an institution choosing a path of maximum volatility and minimum consideration for its own political convenience. And I wept at the complete lack of regard I often feel our party has to its most vulnerable and endangered members and communities — because the death threats and dangerous vitriol we’d inevitably receive by rushing such a sensitive, charged, and under-considered vote weren’t worth delaying it for even a few hours to help us do the work necessary to open a conversation of understanding.”

Ocasio-Cortez added she felt the "rushed" bill happened outside regular order, and she asked House Majority Leader Steny Hoyer to delay the vote, a request he denied.

She wrote that she objected to both the substance of the bill and the process to pass it because she feels that “for far too long, the U.S. has handed unconditional aid to the Israeli government while doing nothing to address or raise the persistent human rights abuses against the Palestinian people.”

In remarks on the House Floor Thursday, House Speaker Nancy Pelosi, who supported the measure, said the Iron Dome is “a purely defensive system, designed to safeguard all civilians living in Israel,” adding the funding “simply continues and strengthens this support.”

Ocasio-Cortez wrote Thursday’s vote “wasn’t the first time people’s wellbeing was tossed aside for political convenience, and sadly I do not believe it will be the last.”

“To those I have disappointed — I am deeply sorry. To those who believe this reasoning is insufficient or cowardice — I understand. To those who asked me to quell the volatility of this moment in our community, which constituted the majority of constituent feedback our office received - I hope we can take this moment and opportunity to more deeply engage in and grow a true, substantive movement of community support for human rights around the world - which includes cherishing and respecting the human rights of Palestinian people,” she added.

That female is Very Very mixed up .. Glad we are supporting Israel & it's people.. I only wish "our" government would support US..Citizens of the USA .. They DO NOT!! All they care about is selves & trying to control, abuse us... They are abusingzdx betraying USA Citizens .. FACT .. Wake up America. !!

She pulled her no vote and went with present. That's what Obama was infamous for when he was a senator to look like he didn't for or against something. This dipshit railed about the Jews and the Palestinians and blah, blah, blah. When the votes wouldn't go her way she became a fence sitter then put on her little girl theatrics. She seems to care more for a terrorist state, organization, than she does for the Jews or even Americans in general.

OMG OAC!!! If you cared SO MUCH about impacts, you would be helping your Democratic Party on solutions to FIX OUR BORDER PROBLEMS right here in our own backyard!!! You are a FAKE and a FRAUD and the only thing you care is money!!!!

The White House is contending opposition to its tax enforcement proposals, targeting amounts as small as $600, is based on banks being too lazy to deal with the extra paperwork.
POTUS・8 HOURS AGO
New York Post

A half-baked attempt to halt U.S. Iron Dome funding helps no one

Two weeks ago, the debate within the U.S. Congress about the proposed government funding bill was heavily covered. Most stories were concerned with the need to pass a budget in order to avoid a shutdown after Sept. 30 and a somewhat controversial proposal by House Democrats to raise the debt ceiling to avoid defaulting on payments for previously approved projects and policies. Lost in that shuffle, however, was the debate over a measure within the proposed U.S. funding bill that would continue funding for the Iron Dome Missile Defense system. This apparatus, employed extensively by the State of Israel since it was first used in 2011, has been instrumental in the Israeli military’s operations over the last decade. Funding for the Iron Dome is one of the central tangible features of the strategic defense cooperation between Israel and the United States.
CONGRESS & COURTS・8 DAYS AGO
mediaite.com

Sarah Silverman Calls Out AOC, The Squad for Opposing Iron Dome Funding For Israel — But With Inaccuracies

Comedian Sarah Silverman last week called out Rep. Alexandria Ocasio-Cortez (D-NY) and her fellow “Squad” members over opposing U.S. funding for the Iron Dome, an air defense system in Israel that has saved countless lives from rockets fired into the Jewish state by Hamas and other terrorist groups. While Silverman’s...
CONGRESS & COURTS・12 DAYS AGO
Cleveland Jewish News

As he did last week, Sen. Rand Paul, R-Ky., again blocked an attempt to expedite the House-passed bill that would provide $1 billion in additional funding to help Israel replenish its Iron Dome interceptor rockets. The bill, H.B. 5323, was brought to the floor late Monday afternoon by Sen. Bob...
CONGRESS & COURTS・13 DAYS AGO
mediaite.com

Rep. Alexandria Ocasio-Cortez purportedly broke down in tears on Thursday after changing her vote on American funding for Israel’s “Iron Dome.”. The vote was on a proposal to contribute $1 billion toward helping Israel to replace missile interceptors damaged by its conflict with the Palestinians in May. Lawmakers overwhelmingly supported the measure, passing it by a vote of 490-9. Ocasio-Cortez originally voted against it, but changed her vote to “present.”
CONGRESS & COURTS・25 DAYS AGO

9 times Alexandria Ocasio-Cortez made statements with her outfits

Congresswoman Alexandria Ocasio-Cortez has been known to make political statements with her fashion choices.
CONGRESS & COURTS・11 HOURS AGO
FOXBusiness

Whoopi Goldberg says Democratic Party sabotaged by far-left demands: 'We made ourselves the boogeyman'

Whoopi Goldberg said the Democratic Party is being sabotaged by far-left members. The cohosts of The View discussed the Democratic Party split in conversations surrounding the infrastructure and reconciliation packages, with some saying Democratic centrists such as Sen. Kyrsten Sinema of Arizona and Sen. Joe Manchin of West Virginia are to blame for stalling the packages.
CONGRESS & COURTS・19 DAYS AGO
The Jewish Press

Republican Senator Rand Paul of Kentucky has once again blocked an attempt by the US Senate to speed up $1 billion in emergency funding to replenish Tamir interceptor missiles for Israel’s Iron Dome aerial defense system. Paul wants the funding to come from a $6 billion funding package earmarked for...
CONGRESS & COURTS・13 DAYS AGO
HuffingtonPost

Stephen Colbert said Senate Minority Leader Mitch McConnell (R-Ky.) is threatening the nation with “financial Armageddon” by blocking efforts to raise the debt ceiling. That would cause the U.S. to default on its debt, and could lead to higher prices, massive job losses and a recession, “The Late Show” host noted.
CONGRESS & COURTS・19 DAYS AGO
Fox News

Fox News host Sean Hannity sounded off on Tuesday's "Hannity," claiming that President Biden has been caught in another "blatant lie" amid chaotic efforts to end the war in Afghanistan. Hannity's comments come on the heels of a Senate hearing with military leaders regarding the Biden administration's handling of the...
CONGRESS & COURTS・19 DAYS AGO

Nancy Pelosi aligns herself with the Satanic Temple

Are you familiar with the word “devout?” It’s most commonly used in a phrase like “She was a devout Catholic.” As a matter of fact, if you go to the dictionary and look it up, that is the very example that they use. The definition of the word devout is...
CONGRESS & COURTS・21 DAYS AGO
nickiswift.com

How Much Was Colin Powell Worth When He Died?

Four-star military general and former Secretary of State Colin Powell died on October 18 due to COVID-19 complications. Powell's family went on Facebook to break the news of his death. "General Colin L. Powell, former U.S. Secretary of State and Chairman of the Joint Chiefs of Staff, passed away this morning due to complications from COVID-19," the post read. The family also mentioned that Powell was fully vaccinated, and thanked "the medical staff at Walter Reed National Medical Center" for taking care of him to the very end. "We have lost a remarkable and loving husband, father, grandfather and a great American," the post concluded.
MILITARY・10 HOURS AGO
Newsweek

Candace Owens signed off her controversial tweet with the hashtag #BringBackManlyMen.
CELEBRITIES・15 HOURS AGO