By Matt Johnson
Sportsnaut
27 days ago 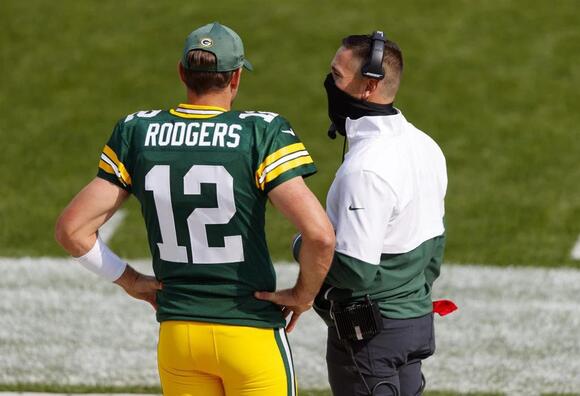 The upcoming Sunday Night Football matchup between the Green Bay Packers and San Francisco 49ers is one of the most anticipated games in Week 3. Already a primetime clash between Aaron Rodgers and one of the best defenses in the NFL, there’s a new storyline that offers a new layer of intrigue.

When reports first surfaced about Rodgers wanting out of Green Bay , the 49ers were one of the first teams mentioned as a landing spot. Kyle Shanahan, looking for an upgrade over Jimmy Garoppolo , reportedly reached out to see if the reigning NFL MVP was available.

While nothing ever came to fruition, with the 49ers drafting Trey L ance and Rodgers returning to the Packers, it seems tension might have been created between two close friends. 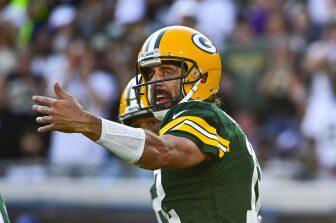 NFL.com’s Mike Silver detailed in a Twitter thread how things went down this spring. On the first night of the 2021 NFL Draft, 49ers’ offensive coordinator Mike McDaniel held a FaceTime call with former assistant coaches Robert Saleh and Mike LaFleur.

Both coaches, now overseeing the Jets’ rebuild, were talking about their plans with the No. 2 pick. When Shanahan entered the room, he joked with LaFleur that he hoped the Jets didn’t surprise by taking another passer. LaFleur, the younger brother of Packers head coach Matt LaFleur, responded by saying San Francisco already had its next quarterback in Rodgers.

Shanahan asked Mike LaFleur to tell his brother to return Kyle’s calls, which Matt was reportedly ignoring. When Mike said “Can you blame him?”, Shanahan got visibly upset and left the room. In his eyes, he was simply doing his job by reaching out to see if Rodgers was available for trade. 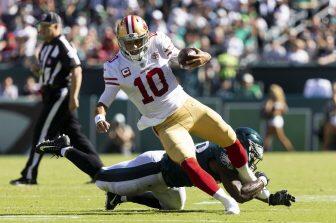 Part of the backstory here is likely the Green Bay Packers’ suspicion that NFL teams tampered in pursuit of a trade for Rodgers. Rodgers and 49ers’ general manager John Lynch share an agent, David Dunn, who some believe let San Francisco know the All-Pro quarterback wanted out.

LaFleur and Shanahan both downplayed any notion that what happened this offseason impacted their close relationship. But it will be worth watching on Sunday night to see if either team keeps its foot on the gas offensively if leading big late in the game.

Golden Tate Is Right About Matthew Stafford and Aaron Rodgers

Matthew Stafford has always been good enough to win a Super Bowl. Multiple Super Bowls, in fact. People couldn't grasp that because he was in football hell with the Detroit Lions, where his best efforts only resulted in frustration and a goose egg in the playoff wins department. It's taken three weeks for the new Los Angeles Rams quarterback to turn skeptics into believers, moving his side above all others to the very real but not legally binding status as potential Super Bowl favorite.
NFL・24 DAYS AGO
Larry Brown Sports

Aaron Rodgers has drawn attention this year for his long hair and interesting style. Now we know the supposed reason for the Green Bay Packers quarterback’s long hair. Rodgers joined “The Pat McAfee Show” on Tuesday for his weekly guest appearance. During his appearance, he talked about his hair and revealed his reason for growing it out.
NFL・28 DAYS AGO
CBS Sports

With the Packers off to a 4-1 start this season, the Aaron Rodgers drama that dominated the offseason seems like a distant memory. However, as soon as the 2021 season ends, there's a good chance that last year's drama is going to pick up right where it left off and that's because Rodgers still doesn't necessarily seem interested in staying in Green Bay.
NFL・7 DAYS AGO
FOX Sports Radio

Jason Smith explains his theory on why it's now obvious that Aaron Rodgers will not be playing for the Packers next season.
NFL・1 DAY AGO

Justin Fields fires strong warning to Aaron Rodgers ahead of Bears vs. Packers

Chicago Bears quarterback Justin Fields is not worried about Green Bay Packers superstar Aaron Rodgers. Not that he’s confident he’s better, but he knows his focus should not be on individual battles. Ahead of their Week 6 showdown with the Packers, the Bears youngster was asked about his thoughts on...
NFL・7 DAYS AGO
TMJ4 News

Packers are one of the most hated teams in NFL

As we head into the heart of NFL season, many Wisconsinites will be rooting for the Packers.
NFL・1 DAY AGO
Larry Brown Sports

Aaron Rodgers showed no mercy to Chicago Bears fans after he scored a big touchdown late in Sunday’s game, but the Green Bay Packers star says his trash talk was a response to a not-so-friendly gesture from someone in the stands at Soldier Field. Rodgers scored a rushing touchdown in...
NFL・4 DAYS AGO
Dolphin Nation

The NFL trade deadline is coming up soon, which means teams around the league will have to decide whether to buy or sell. One NFL executive thinks the Green Bay Packers should trade for Miami Dolphins star cornerback Xavien Howard. “Xavien is a guy I’d trade for if I’m Green...
NFL・3 DAYS AGO

After all these years, Green Bay Packers quarterback Aaron Rodgers still has the number of the Chicago Bears. The latest episode of Mr. Rodgers Owns The Bears was shown Sunday night, with the Packers beating Chicago at Soldier Field to the tune of a 24-14 score. The Packers were around...
NFL・3 DAYS AGO
102.5 WDVE

Here's what Aaron Rodgers said about rumors that he's interested in joining the Pittsburgh Steelers next season.
NFL・14 DAYS AGO
ClutchPoints

Green Bay Packers quarterback Aaron Rodgers couldn’t be any happier with the return of offensive tackle David Bakhtiari to practice this week. Rodgers didn’t hold back his praises for the All-Pro tackle when speaking to reporters on Wednesday. Clearly, the superstar QB missed his best friend and his blindside protector.
NFL・21 HOURS AGO
USA TODAY Sports Media Group

Aaron Rodgers has the Green Bay Packers offense clicking once again on Sunday as the veteran QB has thrown for a TD and ran for another in the first half against the Steelers at Lambeau Field. There was a great moment, though, in the second quarter when Steelers coach Mike...
NFL・17 DAYS AGO

Would the Packers trade Jordan Love before deadline?

When the Green Bay Packers moved up in the first round of the 2020 NFL draft to select quarterback Jordan Love, it seemed like the beginning of the end for Aaron Rodgers. With a lot changing in one and a half years, would the Packers move on from their succession plan and trade Love before the deadline?
NFL・10 HOURS AGO
On3.com

After a tumultuous offseason filled with rumors concerning quarterback Aaron Rodgers’ next destination, he is once again on the field with the Green Bay Packers. Since Rodgers’ renegotiated contract now makes him a free agent no later than the 2023 offseason, new speculation about his next team, whether that is next year or the following, is swirling.
NFL・15 DAYS AGO
Chicago Tribune

5 things to watch for when the Chicago Bears host the Green Bay Packers, including matching wits with Aaron Rodgers and the 1st taste of the rivalry for Justin Fields — plus our Week 6 predictions

Chicago Bears quarterback Justin Fields will get his first taste of the rivalry with the Green Bay Packers on Sunday at Soldier Field. The Packers (4-1) arrive having won four straight, putting them atop the NFC North. The Bear (3-2) have won two in a row, including a 20-9 upset of the Las Vegas Raiders in Week 5. As kickoff approaches, here’s our snapshot look at the game. Chicago Bears (3-2) ...
NFL・5 DAYS AGO
Insider

Aaron Jones briefly lost a medallion carrying some of his father's ashes during a game, so the Packers came up with an innovative way to protect them.
NFL・2 DAYS AGO
NJ.com

Aaron Rodgers has a problem with Phil Simms. And he’s had it for a while now. The Green Bay Packers quarterback joined “The Pat McAfee Show” on Wednesday and explained his beef with the New York Giants legend. Believe it or not, it has to do with Deflategate. You remember...
NFL・7 DAYS AGO
Acme Packing Company

Packers fans are in for another year of rumors and speculation about the whereabouts of Aaron Rodgers. It’s what’s signed up for when your quarterback holds out and threatens retirement just for him to return and shave off a season on his contract, giving him just one remaining year on his deal beyond 2021. With that being said, the guy’s tune has changed recently.
NFL・22 HOURS AGO
USA TODAY

'I still own you': Packers QB Aaron Rodgers isn't only NFL player to dominate specific team

Packers QB Aaron Rodgers' told Bears fans Sunday "I still own you." He's not the only one. Here are other players who dominated specific teams.
NFL・2 DAYS AGO
Mining Journal

CINCINNATI — Bengals coach Zac Taylor has seen a lot of Aaron Rodgers. In Taylor’s estimation, he’s watched more videotape on Rodgers than any other NFL quarterback. And that includes Taylor’s current quarterback, Joe Burrow. One of Taylor’s first assignments when he was hired as an NFL assistant with the...
NFL・12 DAYS AGO