By Mia Galuppo
The Hollywood Reporter
21 days ago 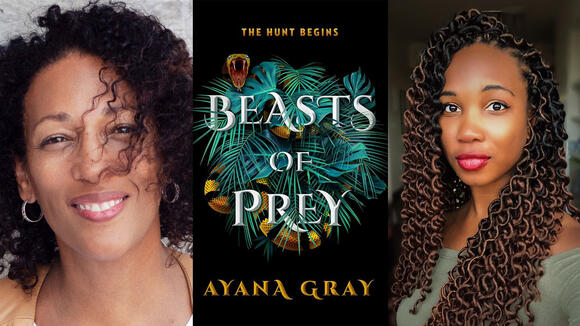 Beasts of Prey, the first novel in a planned fantasy series, is being developed by Netflix as a feature film.

Written by Ayana Gray, the story follows two Black teenagers who strike a dangerous alliance and head out on a journey to hunt down the vicious monster menacing their hometown, uncovering deadly secrets along the way. The book is due out Sept. 28 via Penguin Randomhouse imprint G. P. Putnam’s Sons Books for Young Readers.

Melody Cooper has been tapped to adapt the screenplay.

“I am thrilled to have the opportunity to work with Melody Cooper and the incredible teams at Netflix and Clubhouse Pictures as they work on developing Beasts of Prey into a film,” said Gray.

Beasts of Prey marks the debut novel for the author, who is represented by CAA and Park & Fine Literary and Media.

Cooper, who is repped by CAA, Cartel and Katz Golden, most recently served as a story editor on the 22nd season of Law & Order: SVU . Her other screen credits include being previously staffed on The CW anthology series Two Sentence Horror Storie s.

See What Elvira, Mistress Of The Dark, Looks Like Now

You may remember watching Elvira, Mistress of the Dark, on Elvira’s Movie Macabre each week. Elvira was played by Cassandra Peterson and you won’t believe what she looks like in real life! Cassandra has admitted in the past that she always loved the horror movie genre. When she was a kid, she would much rather play with horror-themed toys instead of Barbies. Later, she worked as a go-go dancer before she started working as an actress.
MOVIES・24 DAYS AGO
/Film

M. Night Shyamalan's Next Feature, Knock At The Cabin, Will Be Released In 2023

The previously untitled M. Night Shyamalan film for Universal Pictures has been given both a title and an official release date according to an exclusive report from Deadline. "Knock at the Cabin" will be Shyamalan's 15th feature and will be released in theaters on Friday, February 3, 2023. This date is a move from its original plan of February 17, 2023, which would have put the film up against Disney's "Ant-Man and the Wasp: Quantumania." Nothing has been revealed yet regarding the plot, but it's safe to assume this will be another thriller as part of his continued relationship with Universal Pictures.
MOVIES・2 DAYS AGO
Laredo Morning Times

Audrey Diwan’s “Happening,” one of the three shortlisted films to represent France for the upcoming 94th Academy Awards, will make its North American premiere at the Chicago Film Festival as part of the Global Currants and Women in Cinema program on Saturday, Oct. 17. “Happening” (L’événement) had its world premiere at the 78th Venice Film Festival. The film won the Golden Lion, making Diwan one of only five women who have ever won the festival’s top prize since 1949. Just acquired by IFC Films and FilmNation, the film is an adaptation of Annie Ernaux’s novel of the same name that looks back...
MOVIES・6 DAYS AGO

Under the terms of the deal, dj2 will get the first opportunity to develop film and TV projects based on Raw Fury games. The publisher’s catalog currently includes hit titles like “Call of the Sea,” “Dandara,” “Signifer,” and “Norco.”. More from Variety. 'Disco Elysium' TV Series Adaptation in the Works...
VIDEO GAMES・4 DAYS AGO
Laredo Morning Times

Netflix, HBO Max Swoop on Streaming Rights to 'History of the Occult' (EXCLUSIVE)

In a series of key pacts for Argentine political horror pic, “History of the Occult,” Netflix has snapped up streaming rights to the film for Spain and Latin America, which it plans to drop on Oct. 15, while WarnerMedia’s HBO Max has scooped up all Central European streaming rights. In...
TV & VIDEOS・4 DAYS AGO
The Hollywood Reporter

HBO Max is set to explore the death of Clueless actress Brittany Murphy with a new two-part documentary, What Happened, Brittany Murphy? The documentary produced by Blumhouse Television and Pyramid Productions, and directed by Cynthia Hill (Private Violence), is described as “an intimate, in-depth character portrait of actress Brittany Murphy, going beyond the headlines to explore the mysterious circumstances surrounding her tragic death at 32 years old.” Here’s the official trailer: Murphy was a rising star, who starred in films such as 8 Mile and Just Married, and passed away in 2009. Her death was ruled accidental and was caused by a “combination of pneumonia, an iron deficiency and multiple drug intoxication,” CNN says. The new documentary includes new footage and interviews with people who were close to the actress and strives to go “beyond the tabloid rumors to examine the impact of Hollywood’s sexism on her struggles, as well as lingering concerns about her relationship with husband Simon Monjack.” What Happened, Brittany Murphy? premieres Thursday, Oct. 14.
CELEBRITIES・8 DAYS AGO
Variety

The next nightmare-inducing Blumhouse horror movie is here. Universal Pictures has released the first trailer for Scott Derrickson’s “The Black Phone,” set to hit theaters on February 4. Starring Ethan Hawke, the film follows an abducted boy locked in a basement stained with the blood of half a dozen other murdered children. In the cellar with him is a black, antique telephone with a disconnected cord. However, the phone rings at night with calls from the dead children, helping the boy plot his escape. In the trailer, Hawke first appears in white face paint and a top hat, struggling with falling grocery bags...
MOVIES・2 DAYS AGO

Julia Ducournau’s Cannes Film Festival Palme d’Or winner Titane has been selected to represent France in the Best International Feature Film Oscar race. The country’s selection committee had shortlisted three titles as the potential submission, including Audrey Diwan’s Venice Golden Lion winner L’Evénement (Happening) and Cédric Jiminez’s Bac Nord (The Stronghold). Titane is a bold choice for France, which often tends toward the more traditional in submitting films to the Academy Awards. The audacious film was released locally by Diaphana Distribution in July after making history as only the second film directed by a woman to win the top Cannes honor....
MOVIES・3 DAYS AGO
Decider

Has there ever been a greater love story than that of Eddie Brock and the alien symbiote Venom that feeds off of his body? Well, probably, yes, but if the marketing for Venom: Let There Be Carnage is anything to go by, the sequel to this Marvel movie is really leaning into the odd couple dynamic.
TV & VIDEOS・15 DAYS AGO
The Hollywood Reporter

Here’s the thing about dreams. They’re almost always boring to think about unless they’re your own, or you’re a therapist who’s being paid to analyze them. Unfortunately, that hasn’t stopped Carlson Young from expanding her acclaimed 2018 short into this feature film, which the debuting filmmaker says was inspired by a recurring dream and the 17th century science fiction novel of the same name by Margaret Cavendish. Although The Blazing World boasts visual stylishness to spare, viewers will be hard-pressed to enjoy going down this cinematic rabbit hole. That’s not a random reference; the film, which Young also co-wrote (with Pierce...
MOVIES・1 DAY AGO
imdb.com

Netflix’s awards hopefuls Robert Greene’s “Procession” and Alonso Ruizpalacios’ “A Cop Movie” are heading to Manhattan’s Paris Theater as part of its “New Directions in Documentary” series. Both hybrid features, which are vying for a spot on this year’s Academy Award doc shortlist, will screen alongside previously celebrated form-bending docus...
TV & VIDEOS・10 DAYS AGO

Distrib Films has acquired U.S. rights to a flurry of high-profile foreign-language films, including the Cesar Award-winning animated feature “Josep,” the Isabelle Adjani starrer “Sisters,” and “Tokyo Shaking” with Karin Viard. Directed by Yamina Benguigui, “Sisters” stars Adjani, Maiwenn and Rachida Brakni as siblings who tear each other apart when...
MOVIES・11 DAYS AGO
Variety

Magnet Releasing, the genre arm of Magnolia Pictures, has acquired North American rights to “You Are Not My Mother” following its world premiere at this year’s Toronto International Film Festival. The movie, an Irish folk horror-thriller, screened in the festival’s Midnight Madness section. It’s the feature debut of Irish filmmaker Kate Dolan. The film centers on a teenage girl named Char (Hazel Doupe) whose mother, Angela (Carolyn Bracken) goes missing only to return with an increasingly frightening change in personality. She might look and sound the same, but Angela’s behavior has taken a dark turn, as if she has been replaced by a...
MOVIES・11 DAYS AGO
NewsTimes

LevelK has boarded international sales rights to “The Passenger” (“La pasajera”), a high-concept Spanish horror film directed by Fernando Gonzalez (“Downunder”) and Raul Cerezo which will world premiere at Sitges in the Panorama Fantastic section. Produced by Jose Luis Rancaño (“The Night My Mother Killed My Father”), “The Passenger” follows...
MOVIES・11 DAYS AGO
New Haven Register

Interior designer and television personality Bobby Berk has a new gig at Netflix: hosting the holiday edition of “Blown Away,” Variety has learned exclusively. “Blown Away” Christmas” is a holiday season on the glass-blowing competition series that has aired for two seasons on Netflix. The four-part special will launch on Friday, Nov. 19.
TV & VIDEOS・9 DAYS AGO
Variety

After spending more than a decade teasing out a story of real-life Black cowboys, Jeymes Samuel was finally on location in Santa Fe, N.M., gearing up to shoot his feature directorial debut, the high-octane Western “The Harder They Fall.” His dream project was about to become a reality. To help him realize his vision, he’d assembled an all-star cast headlined by Idris Elba, Jonathan Majors and Regina King, fresh off her supporting actress Oscar win for “If Beale Street Could Talk.” Netflix had put up $90 million to fund Samuel’s radical reimagining of what he calls the New West, an epic...
MOVIES・2 DAYS AGO
Variety

Emma Stone’s Fruit Tree, A24 to Develop ‘Flicker in the Dark’ Series at HBO Max (EXCLUSIVE)

HBO Max is developing a series adaptation of the upcoming Stacy Willingham novel “A Flicker in the Dark” that hails from Emma Stone and Dave McCary’s Fruit Tree and A24, Variety has learned exclusively. The novel is slated for publication in the U.S. in January 2022 with rights sold into 17 foreign markets to date. Willingham’s debut novel follows Chloe Davis, who was shocked to discover at 12 years old that her own father confessed to the murder of six teenage girls in their small Louisiana town. 20 years later, Chloe is a psychologist in Baton Rouge whose life begins to...
BOOKS & LITERATURE・10 DAYS AGO
Screendaily

The British Film Institute (BFI) has announced the 12 filmmakers who will take part in the London Film Festival’s (LFF) annual professional development programme, Network@LFF. The programme, now in its seventh year, is supported by the BFI with National Lottery funding, and will take place from October 8-11. The 12...
MOVIES・10 DAYS AGO
GreenwichTime

“Spencer” will be the festival’s closing night piece. Directed by Pablo Larraín and written by Steven Knight, the biopic follows Princess Diana (Stewart) as she processes her decision to end her marriage to Prince Charles. More from Variety. Miami Film Festival GEMS to Open With Almodóvar's 'Parallel Mothers'. Oscars Predictions:...
MOVIES・9 DAYS AGO